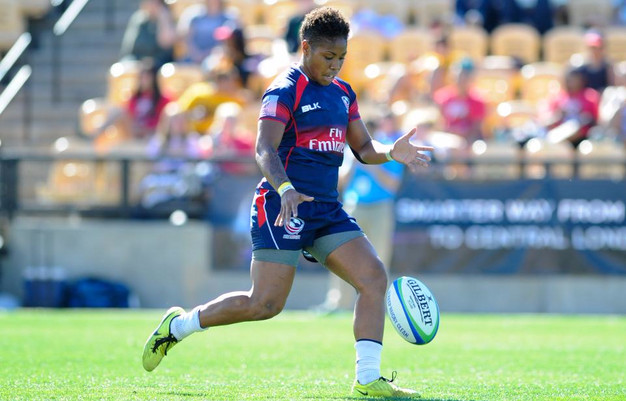 The USA Women 7s ended pool play on a higher note, defeating Spain in the third round of the Sao Paulo 7s. Lightning called the match with one minute remaining, and when play resumed, the Eagles sent rookie Naya Tapper across for the 33-0 win.

The USA committed a lot of penalties, and that kept the ball in its opponent’s hands. Spain threatened throughout, able to break away and keep the ball alive, but the team let the ball hit the ground too often. The Eagles also did a good job of turning over possession in the tackle, and that afforded some opportunities to attack quickly.

Hunter Griendling poached one such opportunity, and the ball recycled into her hands after Megan Bonny made a mini break. The debutante scored her second try of the tournament, and Alev Kelter converted.

The half looked like it was going to end 7-0 to the USA. Kristen Thomas played good defense inside the 22 meter and forced a turnover that moved to Kelter on the sideline. The scrumhalf pulled away for what looked like the makings of a try, but the breakaway wasn’t supported well enough and ended in a turnover. Spain held onto the ball for the remainder of the half and worked tirelessly to extend past the American defense. Just as the ball was moving toward space, Kelter stepped in for the intercept and seven points, 14-0 into the break.

The USA sent the second-half kickoff and got its hands on the ball again, but didn’t come down with it. After working deep in its end, Thomas finally found a straightaway down the sideline for a long-range score, 19-0.

With the game winding down, Spain looked to relieve some pressure and cleared its lines. Bonny was perfectly placed for the receipt and initially gathered the ball before bobbling it. Fortunately, Ashley Perry had retreated for support, and Bonny got the pass off the ground to the new prop. Perry tore toward the tryline, broke two tackles and scored her first try in her first series event. Kelly Griffin hit the conversion for the 26-0 lead.

The game then took a 15-minute break when lightning flashed and resumed with a USA scrum. Ball came out to replacement wing Naya Tapper, who is still a University of North Carolina student. She split two defenders and shook off some contact for her first try on the circuit. Kelter hit the conversion for the 33-0 win.

The USA advances to the Cup quarterfinals against England, which finished 2-1 after a third-round loss to France. That game will be streamed at 9:06 a.m. EST.