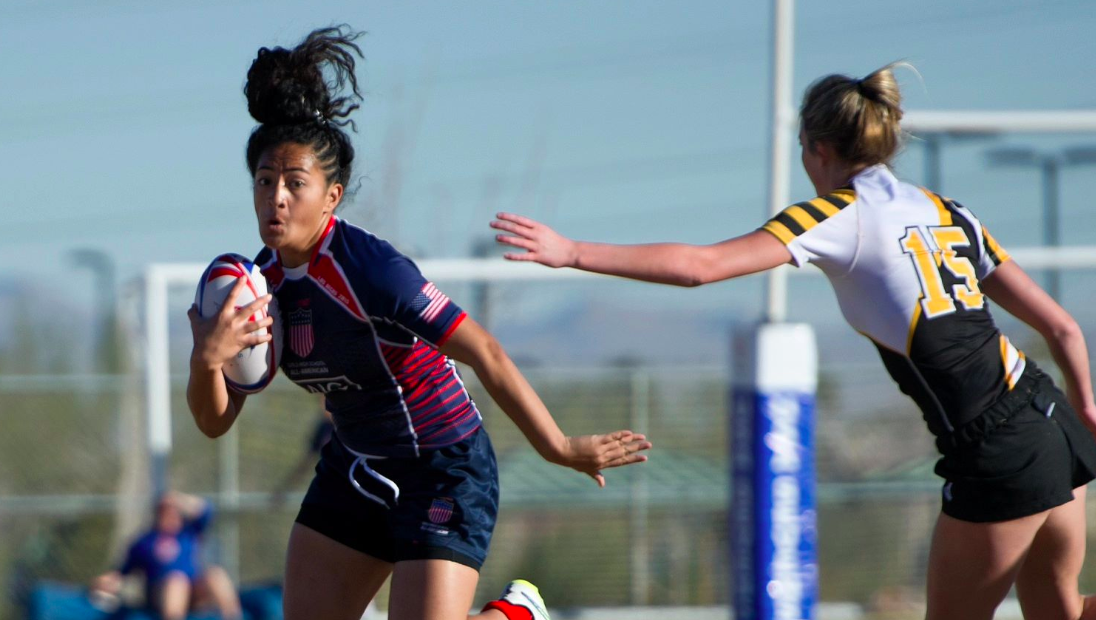 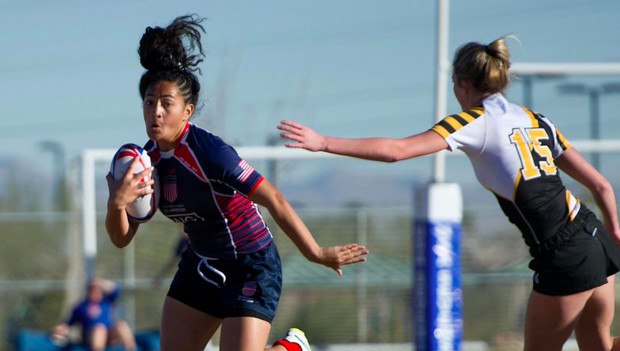 The GHSAAs didn’t enter a team in this year’s tournament but dispersed its players to several all-star and academy sides. /// Photo: Rugby Fotos – Wojie Rugby Photography

All-star teams and academies dominate the LVI girls high school elite division. Last week, we reviewed Atlantis (which is no longer bringing Emily Henrich) and the first Utah Lions Rugby Academy’s girls team. Of the remaining six teams, one is from British Columbia, another from New Zealand, and four from the western portion of the U.S.:

The All Stars represent the pinnacle of the ATAVUS programming, and according to Girls Elite 7s coach Emilie Bydwell, prepares athletes for opportunities at the All American level and beyond.

Several players with ATAVUS roots have been receiving those opportunities, like Girls High School All Americans (GHSAA) Kayla Canett, Emily Prentice, Alaina Valenciano and Junior All American Michel Navarro. They’re joined by Bayleigh Gable and Mata Hingano, who played in the summer BC U18 series and 2015 LVI 7s, respectively.

Joining Canett and Navarro, Hannah Savin and Alyssa Henneberg also hail from Fallbrook High School in California. Savin is a longtime participant in ATAVUS events and Henneberg is part of the Academy system, as is North Suburban’s Tatum Johnson. Lindsey Baron and Zoe Duffield were both discovered at USA Rugby Academy Training camps.

Fullerton’s Mireille Codjia stood out during the GHSAA West Winter camp, where she was joined by several ATAVUS teammates.

The state all-star program is a regular at the LVI, and it typically places teams in the Elite and Open divisions (both rosters below). Tundra coach Jimmy Hanson is also coaching UMinn men, Minnesota Valkyries and Armstrong girls, so the support of Brad Dieringer, Steve Martin, Libby Berg and 7s Eagle Katie Johnson in Vegas is much appreciated.

The Elite side has several familiar names in Renee Gonzalez, Ellie Fromstein, Brooke Miller and Haylee Thull. And the Open side is full of up-and-comers from Hopkins, Faribault, Armstrong, Hastings and South River.

The NorCal-based teams make an exciting addition to the Elite division. In its first year, the academy is bringing two teams, and they’re both competing in the top tier. They bring together some of the best talent in the nation, highlighted by MaryJane Pasioles, Mele Tausinga, Loren Roundtree, Grace Martin and Daisy Manoa. They bring high-level experience not only from the high school national championships, but also from teams like the GHSAAs, Atlantis and ATAVUS camps.

The state all-star team is in its early stages of existence but eager to take on big challenges. Twelve in-state players have aligned with the Utah Rugby Academy (read more), but there is plenty of talent in the state.

Sophomore Addie Horsley attended the GHSAA West camp, and coach Matt Kanenwisher believes that the hard-working loose forward has a lot of promise. Where does the speed reside? Look toward Sydnee Cervinski and Peyton Frazier.

“The Lady Cannibals are really in their infancy and 90% underclassmen,” Kanenwisher explained, “but we entered the premier division as a statement of our intentions: to compete at a high level. And there is no better way to start other than to just get started.”

The action kicks off on Thursday morning at the Heritage Park fields. The final will be played inside Sam Boyd Stadium on Saturday at 10:06 a.m. Stay tuned for on-site coverage.