“First off, I’m extremely proud of our women from start to finish,” AIC head coach T Fletcher enthused. “Excellent execution and physicality for 80 minutes. They just weren’t going to be denied tonight and it started with a great week of training. We talked about being physical all week and we really wanted to set the tone with our forwards, specifically in scrums and at the breakdowns. I think they did that last night and that’s why we were so successful.”

Even though AIC and West Chester had faced each once already this fall, the Yellow Jackets didn’t alter its game plan for the final and focused on executing the systems it had been training all season. 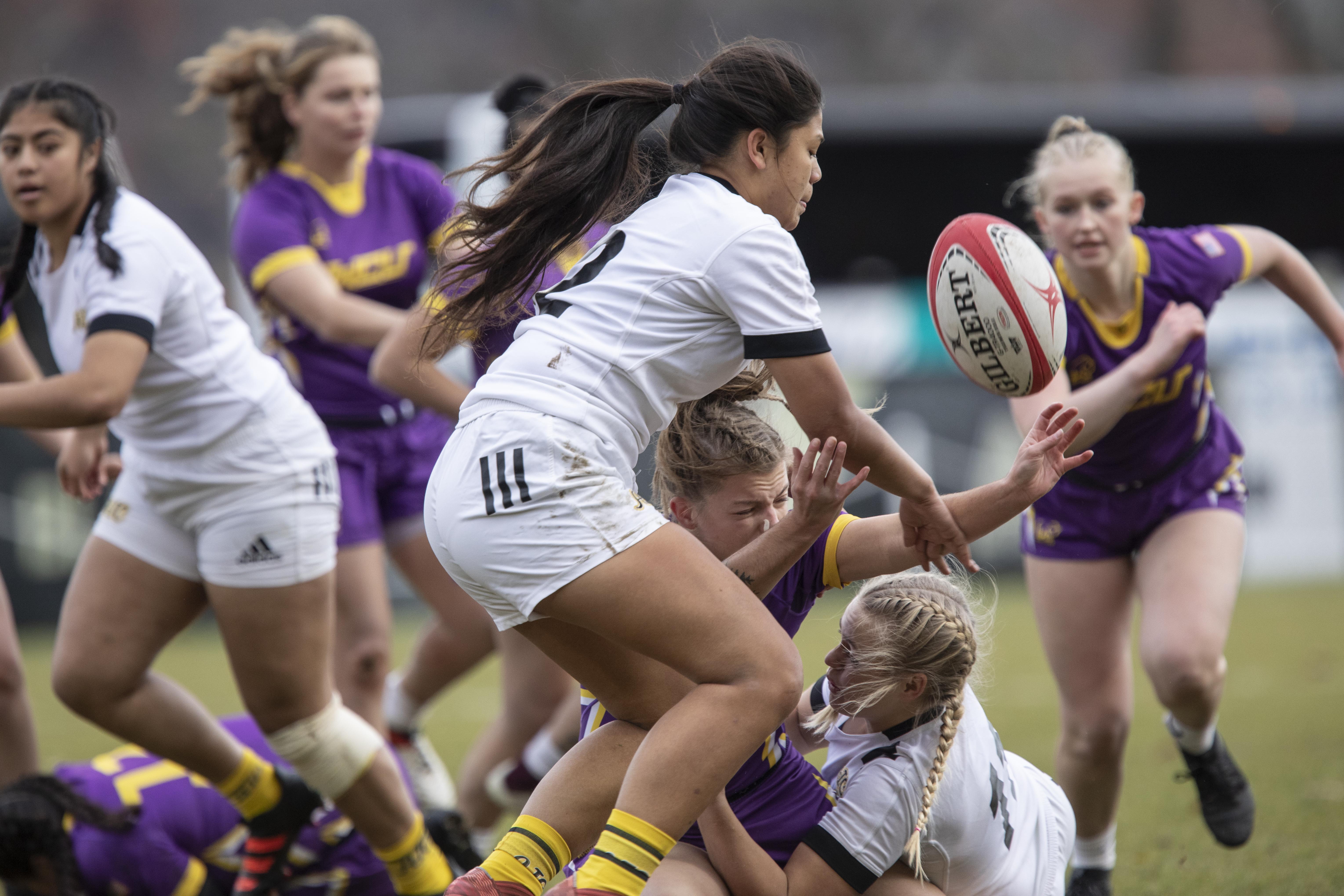 “Going into the championship match I prepped the women with what to expect,” Fletcher explained. “I didn’t want to take away from the success they had worked so hard to achieve, but I believe you can go in over amped and blow it all. My message: Don’t focus on winning. [Eyebrows raised.] Do your best and everything else will fall into place. Most importantly, go have fun.”

West Chester enjoyed the first celebration, as Olyvia Eckard scored the game’s first try in the opening minutes. The lock kicked the conversion, too, for the 7-0 lead. AIC responded with a solid attacking series and showed a knack for securing its breakdowns with little personnel. The Yellow Jackets didn’t overcommit at the ruck and although it looked dangerous, there were no real consequences early on. AIC actually earned a breakdown penalty at West Chester’s 22, and went quickly from the mark. A pass back inside continued the drive and then championship MVP Jessica Berggren dove over the line for try. Fifth-year flyhalf Allyson Pothier added the extras for the 7-7 tie. 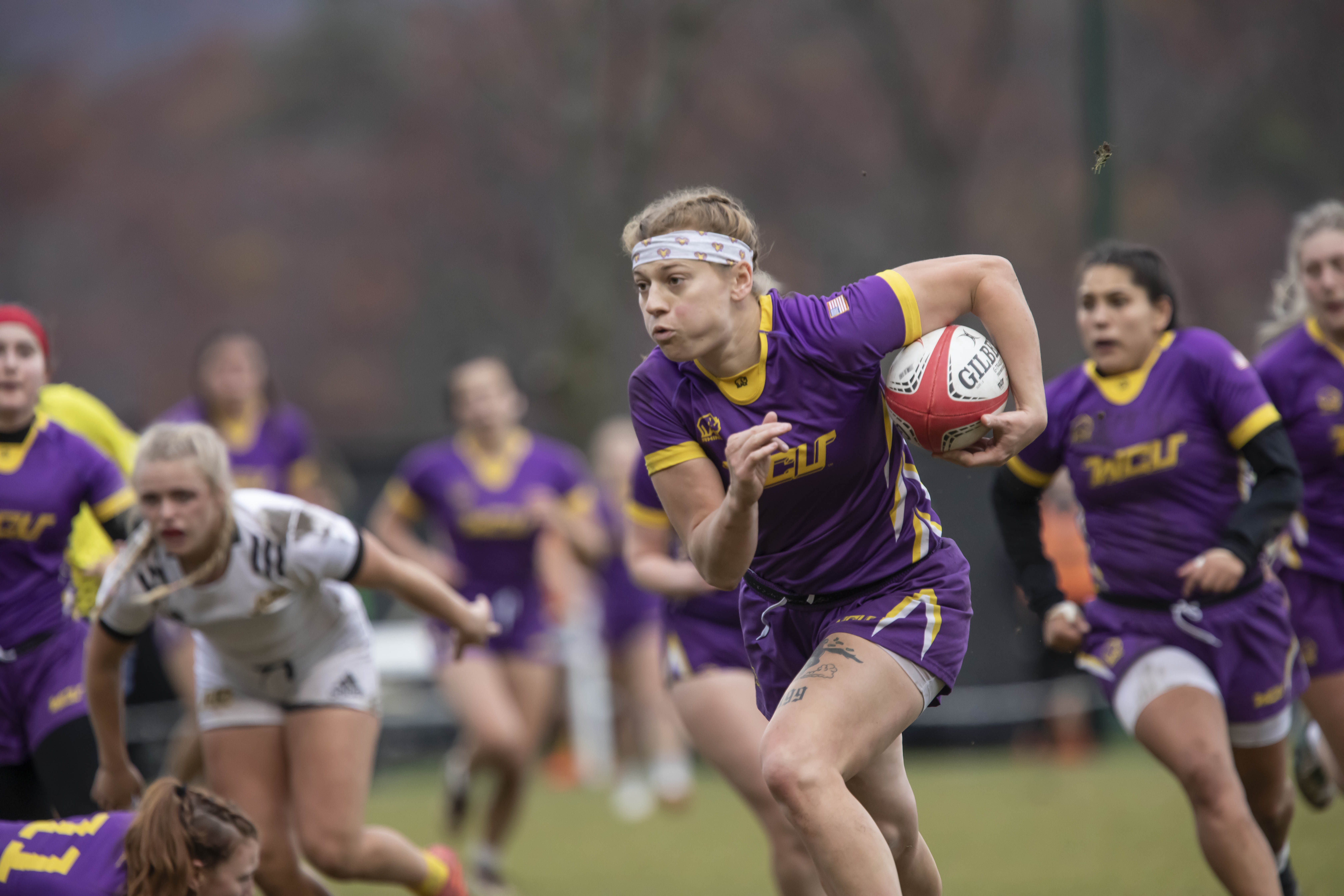 As the 20-minute mark neared, the teams were trading possession but the game remained in AIC’s end. Pothier nearly relieved the pressure by the most exciting means – an intercept try – but the referee was playing advantage and the ball returned to AIC’s 22. It was a crucial reset that asked the question: Was AIC buoyed or discontented with the almost-try? But West Chester didn’t await an answer and sent a long skip pass to striker Autumn Czaplicki. The outside center looped the pass to wing Emily Almoney and fended the covering defense for the try. It was a big reversal of fortune for AIC as West Chester led 12-7 for the next 15 minutes.

As the half neared its end, AIC botched a well positioned attacking lineout and it looked like that was going to be the end of that scoring opportunity. But then a quick knock-on handed the ball back to the Yellow Jackets for the scrum. No. 8 Lou Justice – a fabulous force all over the pitch – went weak with Pothier, who worked the defense so well before connecting with wing Annekkia Ritter-Truxal. The recycle went down the back line, well timed passes pinned the defense, and space opened up for fullback Suley Guerrero to score. Pothier’s conversion gave AIC the 14-12 into the break. 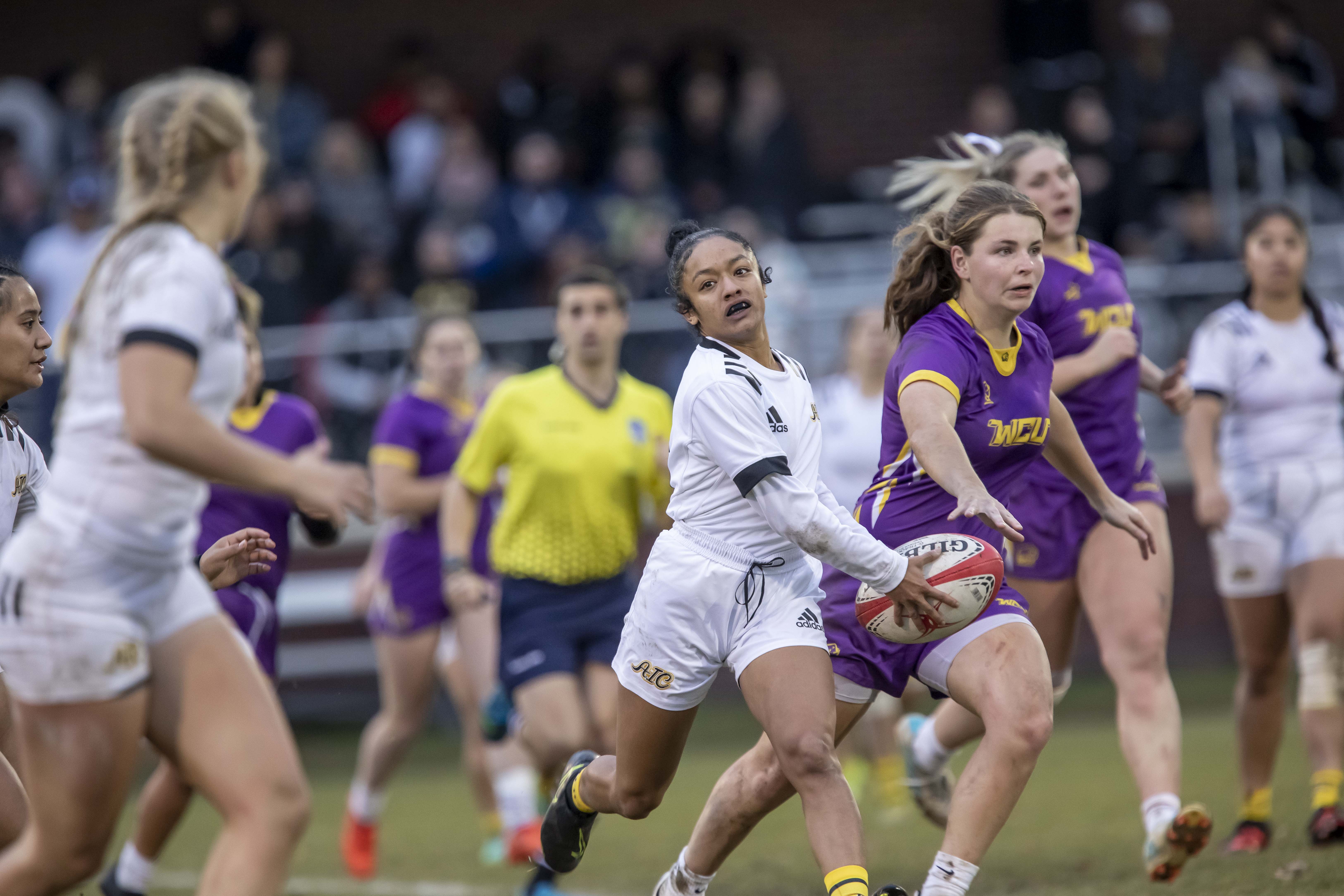 “Our maturity,” Fletcher noted the biggest difference between the regular- and post-season games against the Golden Rams. “Mentally, we’re a completely different team than the team that faced WCU early on in October. I believe that the better you get to know your teammates, the more trust you build over time. Confidence is also something our women were lacking. I believe these two factors go hand in hand. Getting to know each other on and off the pitch allowed each individual to gain confidence in themselves and each other, which gave them a sense of security playing next to one another.”

The two hard-hitting outside centers traded tries to open the second half – AIC’s Ivana Kiripati first, followed by Czaplicki’s second of the game – and then Ritter-Truxal’s try put the Yellow Jackets up 24-17 with 20 minutes to go. A lot of the game was played in AIC’s end, and clearance attempts didn’t make much ground. West Chester had its opportunities for points. Eckard and No. 8 Heather Spangler went on back-to-back big runs and a couple of penalties inside the 22 set up a well placed lineout, but a knock-on followed in the set piece. Eckard attempted a penalty kick inside the 22, just off center, but the ball pulled left. 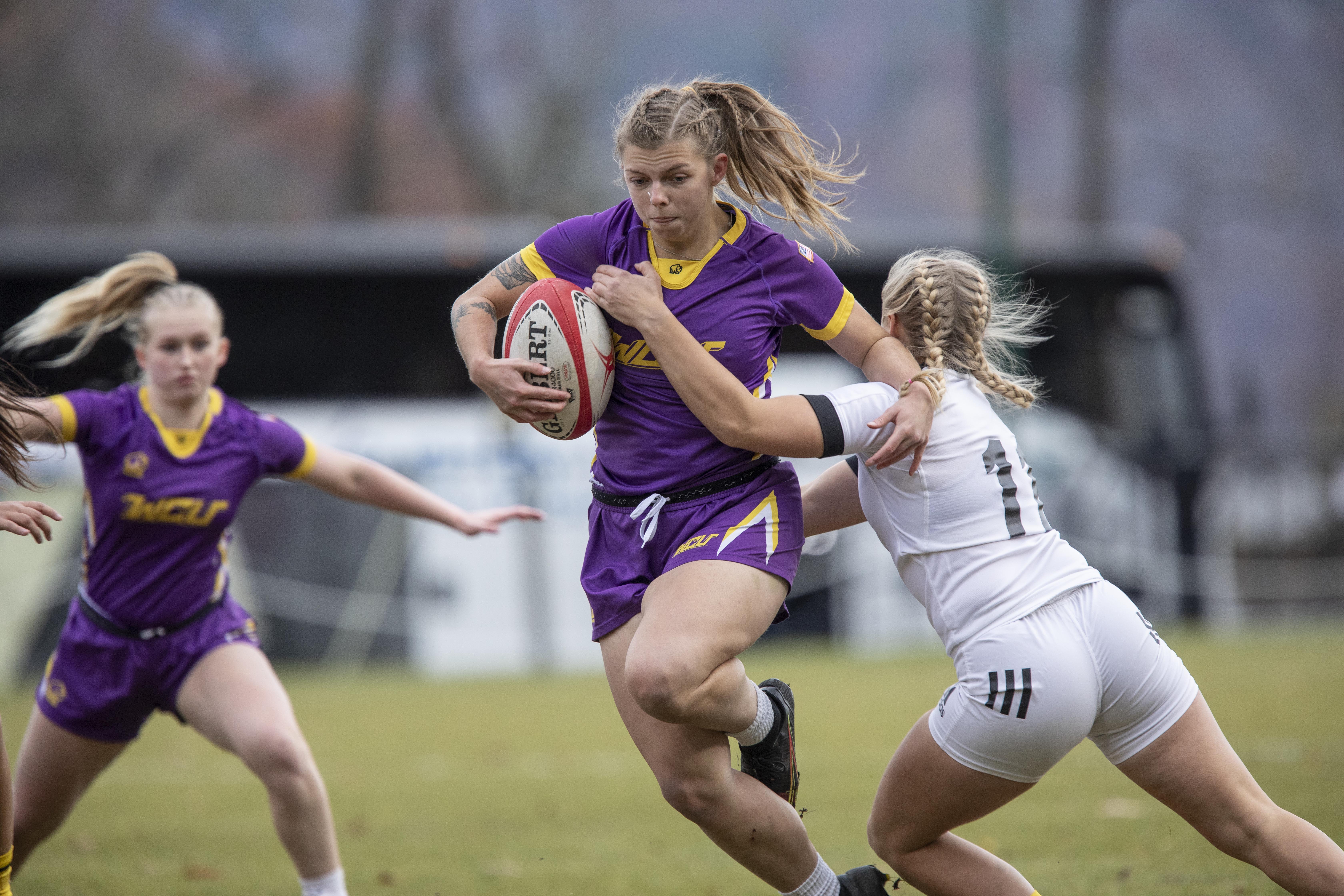 AIC had its own battles as well. Co-captain Ally Pothier was carted off the field at the 60th minute with an injury and some players were visibly shaken. Nonetheless, the team was still able to play a very physical game late in the match, and by the 70th minute, that aggression helped set up a final score. AIC’s scrums dominated and the retreat allowed the breakaways to put a ton of pressure on the attack. One such scenario produced a knock-on and as the ref played advantage, Kiripati tore away for a big sideline run, getting past two defenders before drawing a penalty. The kick to touch and subsequent lineout resulted in a knock-on, but now the game was in West Chester’s 22.

In back-to-back scrums, AIC sent West Chester reeling backward, and good pressure from Justice saw poor clearance kicks result. AIC drew another penalty in the lineout and Justice tapped through mark toward the try line. The No. 8 went into contact a little high but managed to get the ball to ground as the defense attempted to hold the freshman up. Berggren then picked from the base and like a spear dove over the line: 29-17. There were seven minutes to play but now West Chester needed two tries, and it didn’t happen. 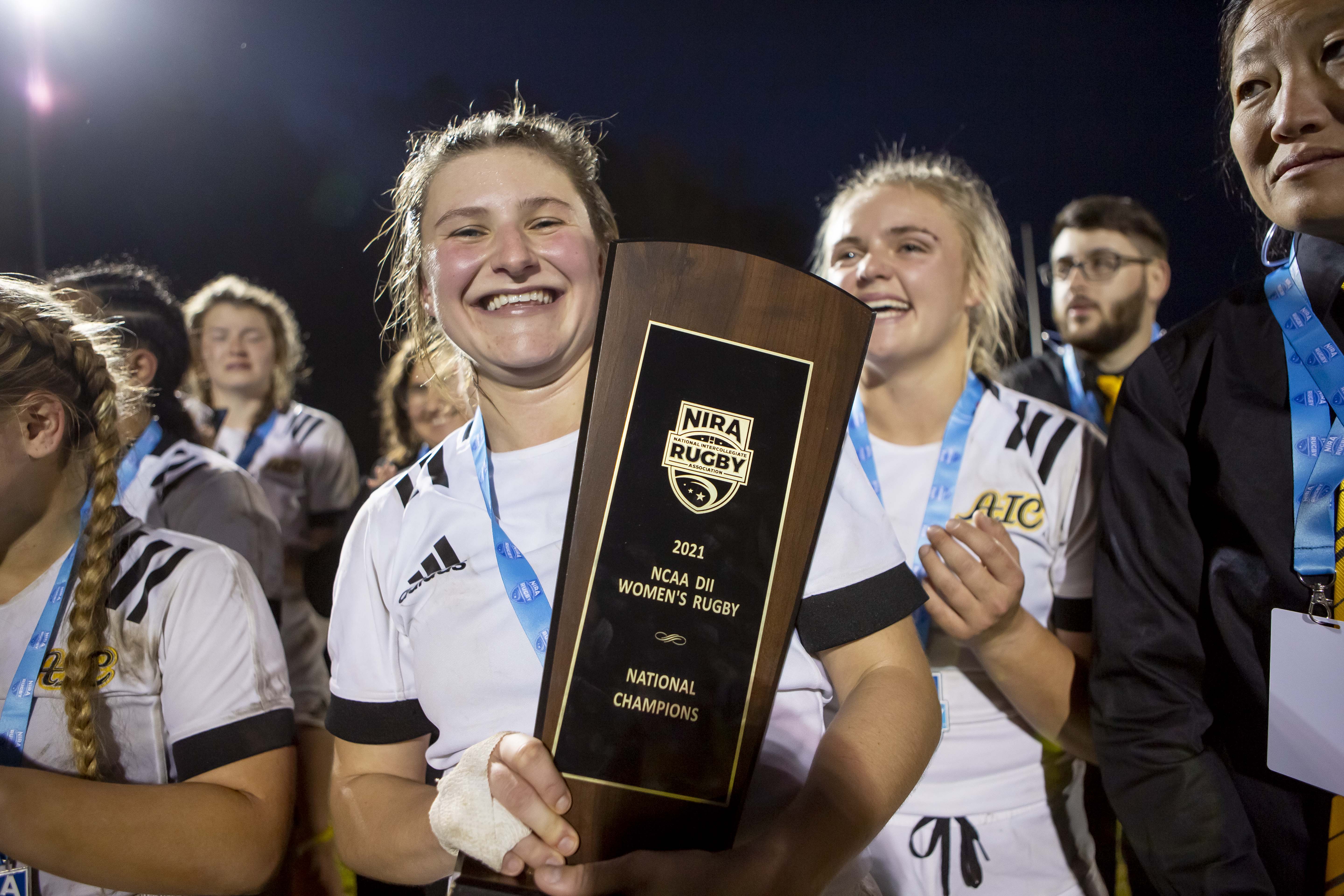 “Going into the playoffs I emphasized the importance that each and everyone of us has a role,” Fletcher thought on standout performances. “Typically, post-match it’s easy to identify 1-2 key players. I would be doing this team a disservice if I did that now because I truly feel it took all of us to win this game. From my amazing staff to e
ach of my student-athletes on the roster.”

AIC’s first national title is especially impressive, because it entered the post-season as the third-seeded team. It had lost regular-season games to play-in opponent Queens University of Charlotte and West Chester, and its finish as national champion is a credit to the work that evolved in the final weeks.