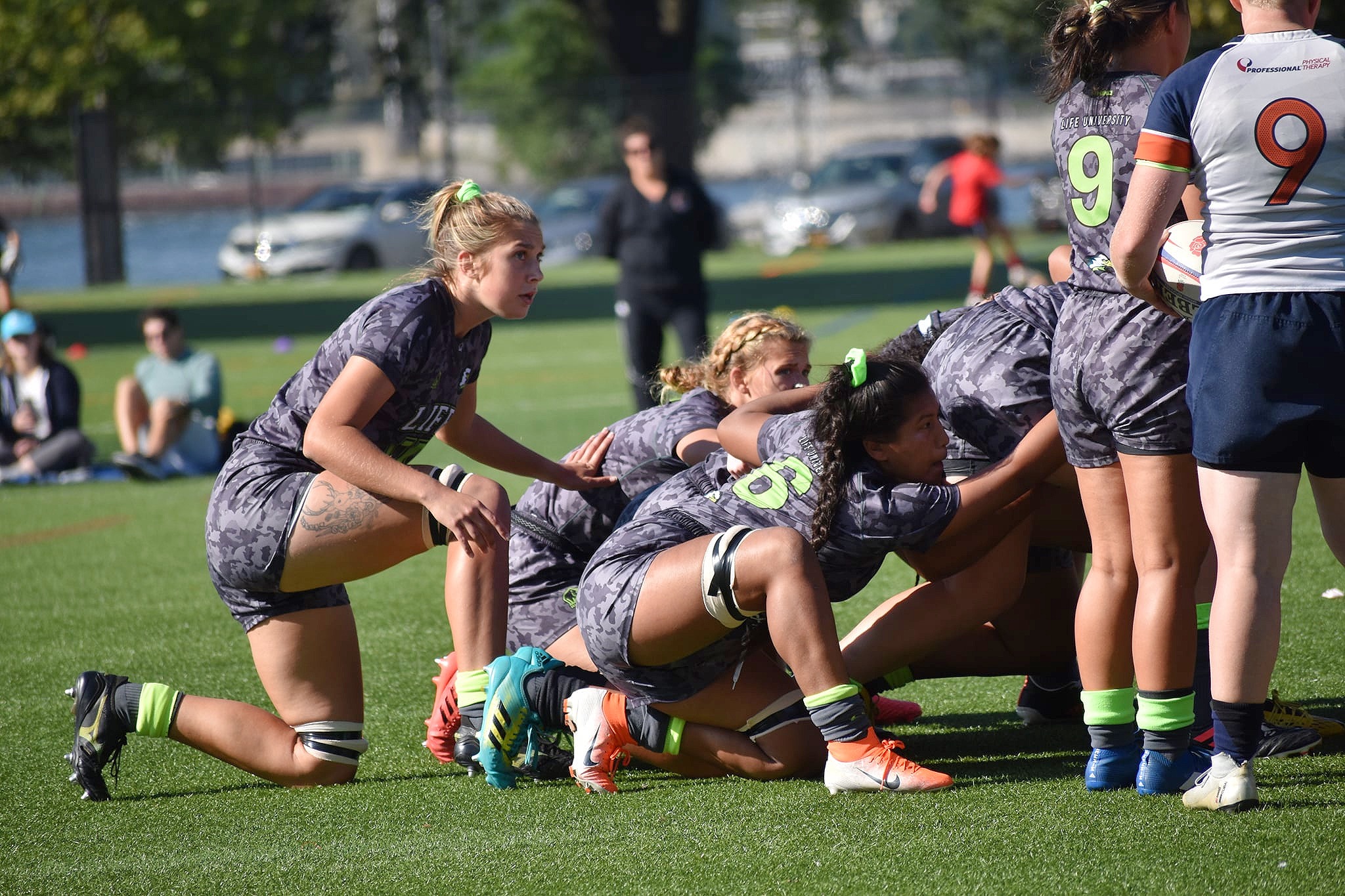 Life University went on a fall tour this past week, hitting three destinations in Alderson Broaddus, Penn State and New York Rugby Club. The annual trip took a fall 2020 hiatus, and its return allowed the entire squad to not only bank solid minutes against diverse competition but also bond in a way that only tour can provide.

“I love fall tour,” Life University 5th year Emerson Allen said. “It’s a great way to start the season. We brought everyone who was available to play – all the freshmen and new transfer students – with the goal of getting as many people as many minutes as possible on the field.”

For Allen, fall tour is the return of something normal. This time last year, Allen lived and trained ARPTC, which offered a pandemic-only fall residency and supported Life’s online curriculum. The Minnesota native returned to Life in the winter quarter and then was selected for the second USA 15s Daily Training Environment in Glendale, Colo. The DI Elite season followed in spring 2021, but it’s the fall pre-season that is settling into something that resembles pre-covid normal. 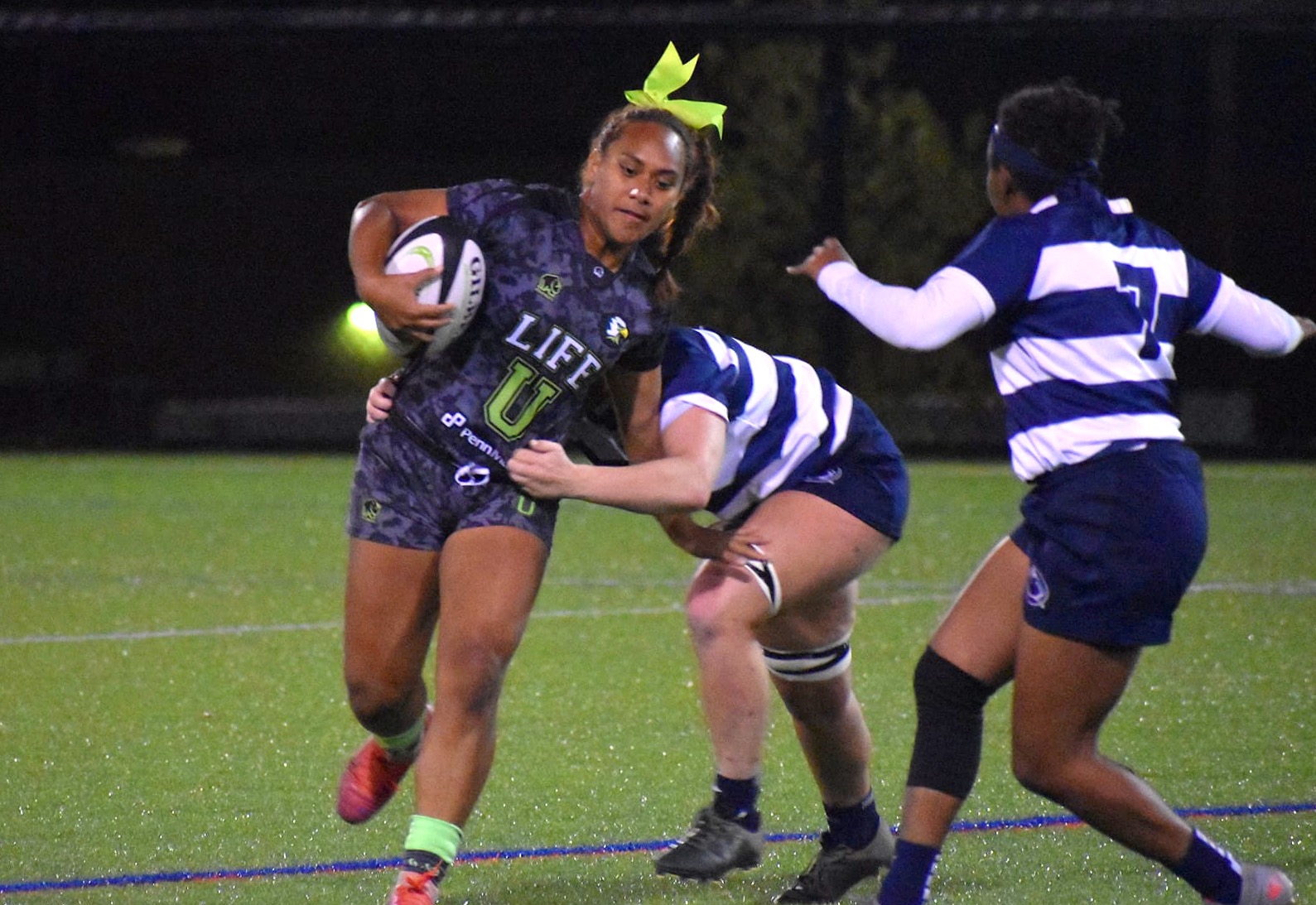 Life Univ. is on the quarter system, so Oct. 4 was the first day of the fall quarter. But the student-athletes have been in Marietta training for a few weeks now, and captains Adrionna Duncan and Jess Keating, along with other key seniors, have been setting the tone.

“This new class, they’ve worked so hard, and our practices have been pretty challenging. They’re trying to push us and they’re up for the fight,” Allen said. “Our team motto this year is: Be about it. And this incoming class is about it.”

The team had some intra-squad scrimmages and then played the WPL Atlanta Harlequins on Sept 25 (33-21 win). The Wednesday following, the Running Eagles were on the road to Alderson Broaddus University, a National Intercollegiate Rugby Association program that alumnae Amelie Poulin (’19) and Angie Owen (’19) serve as assistant coaches. The squads trained together and played some 7s. 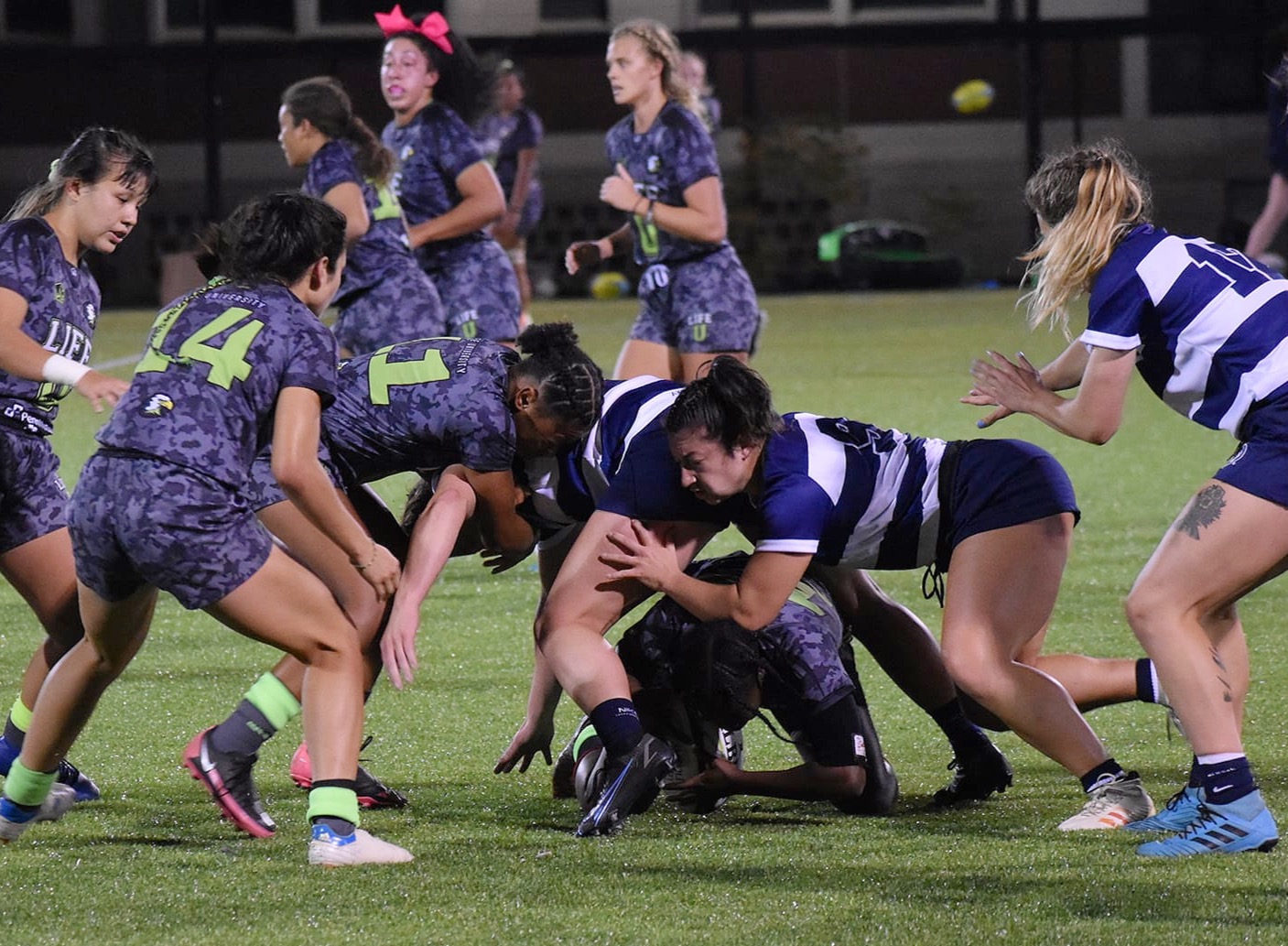 On Thursday, Life arrived at Penn State for a match under the lights.

“I was glad to see them again and see how they grew and adapted as a team,” Allen commented on Penn State’s absence from the 2021 DI Elite competition. “They’re always tough in the breakdown and really successful in poaching and getting over the ball quickly, which is always a challenge for us. So that was something we worked in the practices leading up – securing our breakdowns.” 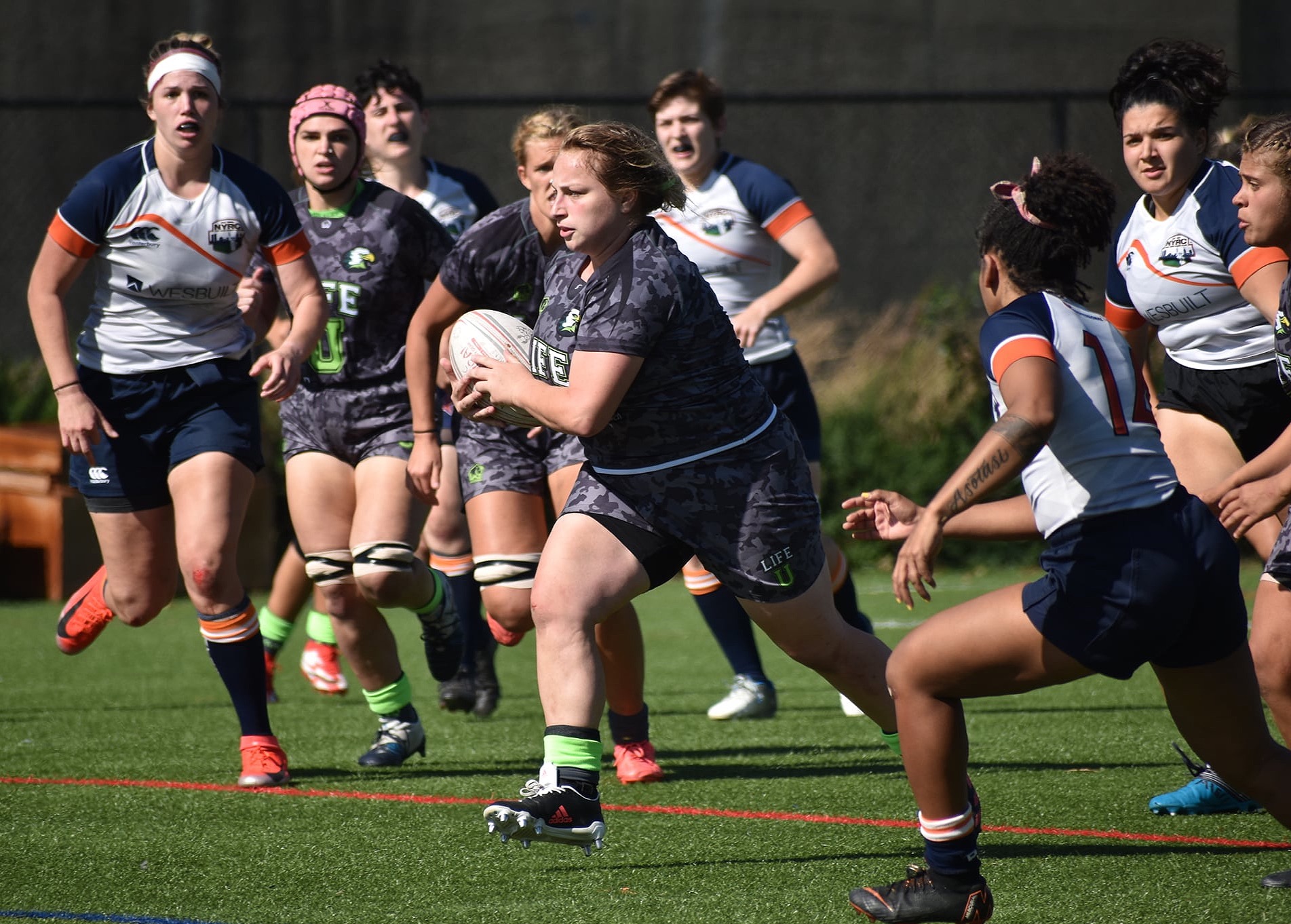 “Something I noticed that is so different from previous seasons is that the team connection right off the bat is really strong,” Allen said of take-aways. “We work and connect better and quicker than previous years. Something we’re still looking to grow on is making faster connections, between the forwards and backs specifically. Penn State was a great example how we can adapt to different players and styles while still working for each other.”

Life had Friday off, visited Hersey Park and with family and supporters in the region. Saturday the Running Eagles traveled to Randall’s Island to play New York Rugby Club. 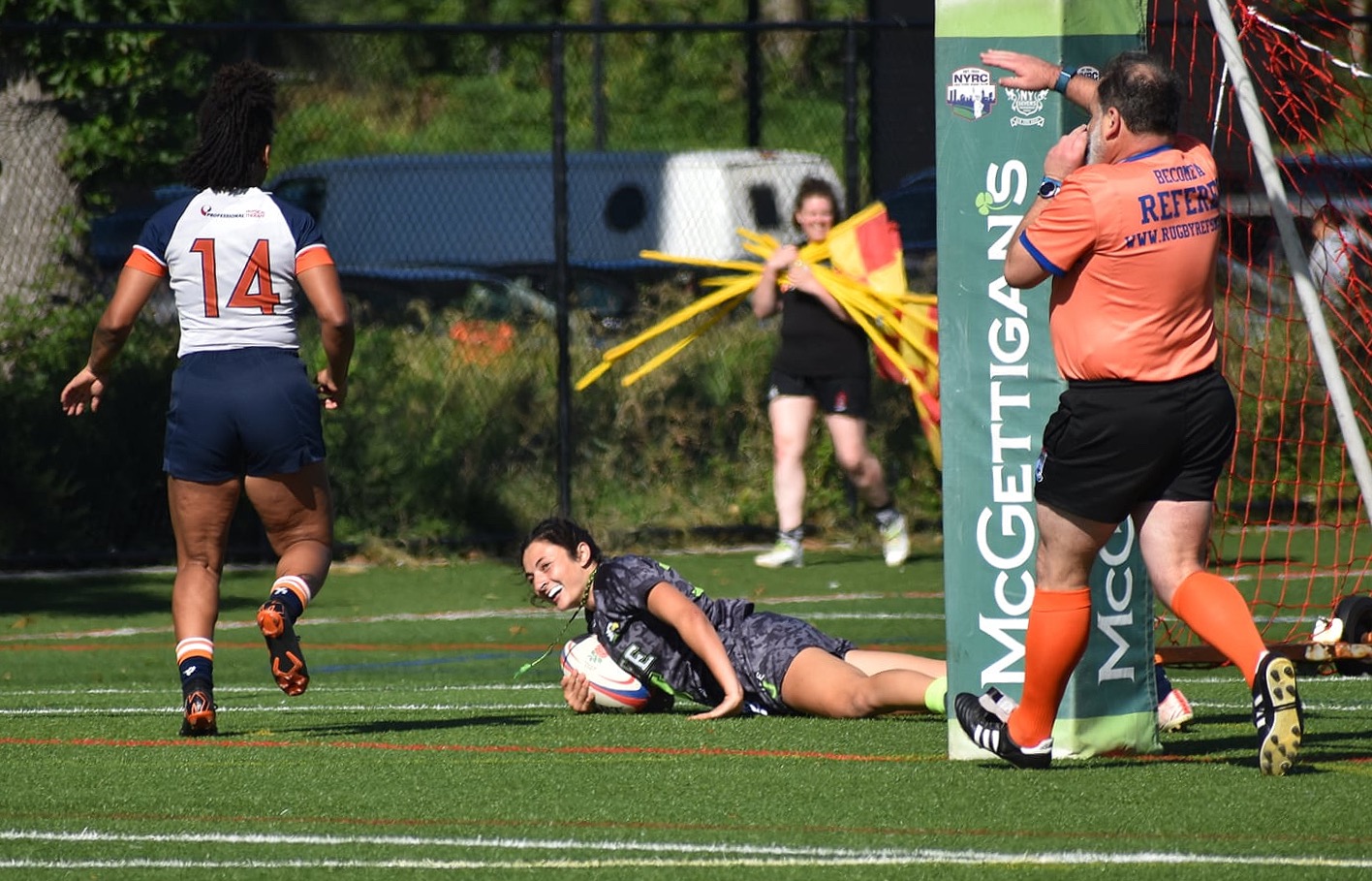 Life took the same approach against the Women’s Premier League team, ensuring that the whole roster saw game time. Allen noted, however, that the swings in momentum weren’t as big as they were on Thursday.

“They were really successful in having layers in their attack, and that was something new that we had to work through defensively, continuing to shoot through and make those decisions right away,” Allen said.

“If there are multiple layers in the attack, you, as a defender, have to make a decision if the ball’s going to hit the players in the front or out the back to the players behind,” the No. 8 clarified. “If it goes out behind, you can’t slow down. You have to continue to shoot through the space to keep the pressure on.” 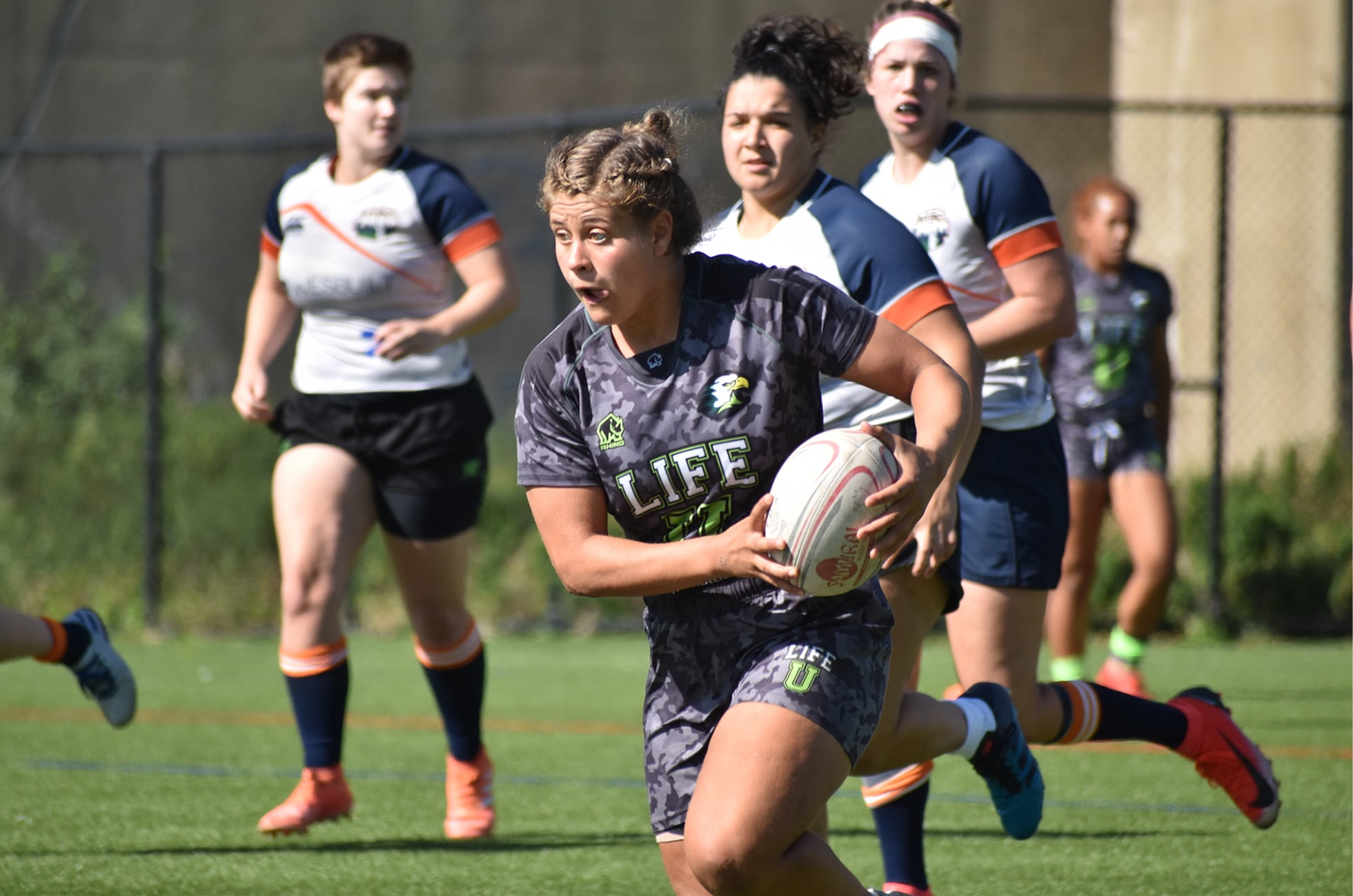 “A really important lesson for teams to have is learning what it feels like to lose, and what it feels like to fight and not come away with the outcome you want,” Allen said. “Our game against New York was a success, even though we didn’t win. We came away a better and stronger team, and that will help people. … Personally, I learn more when we don’t win games than when we do win.”

Allen was impressed, generally, with the new players, but there were standouts.

“Everyone’s very talented,” Allen asserted. “Someone that I think has made really great strides and is really fun to work and play with is Nina Mason. She plays 10, or will come on as 10, and is really successful at seeing space in the backfield and ID-ing things. She and Saher [Hamdan] have a really good connection, especially on the kick-chase. She’s put a couple of grubbers through that have connected with Saher for tries. It’s exciting. She’s a really talented player.”

Life has a full fall schedule ahead, with home-and-away fixtures against Lindenwood University, and repeat games against Penn State and Atlanta Harlequins. BYU and the Midwest Thunderbirds also await. Additionally, Life is fielding a side in the South Atlantic Rugby Conference, a member of National Collegiate Rugby (NCR). The Running Eagles are eligible for post-season play, which culminates in a 15s championship in early December.

“Our team connection and bond are something that I think is so important and will lead our team to success,” Allen closed. “I’m really excited to see where that goes this year, because we have hard games coming up. It’s been great to see how hard we’ll work for each other. And all the freshmen and newcomers, they’re coming in with all this willingness to work. They have a lot of grit.”