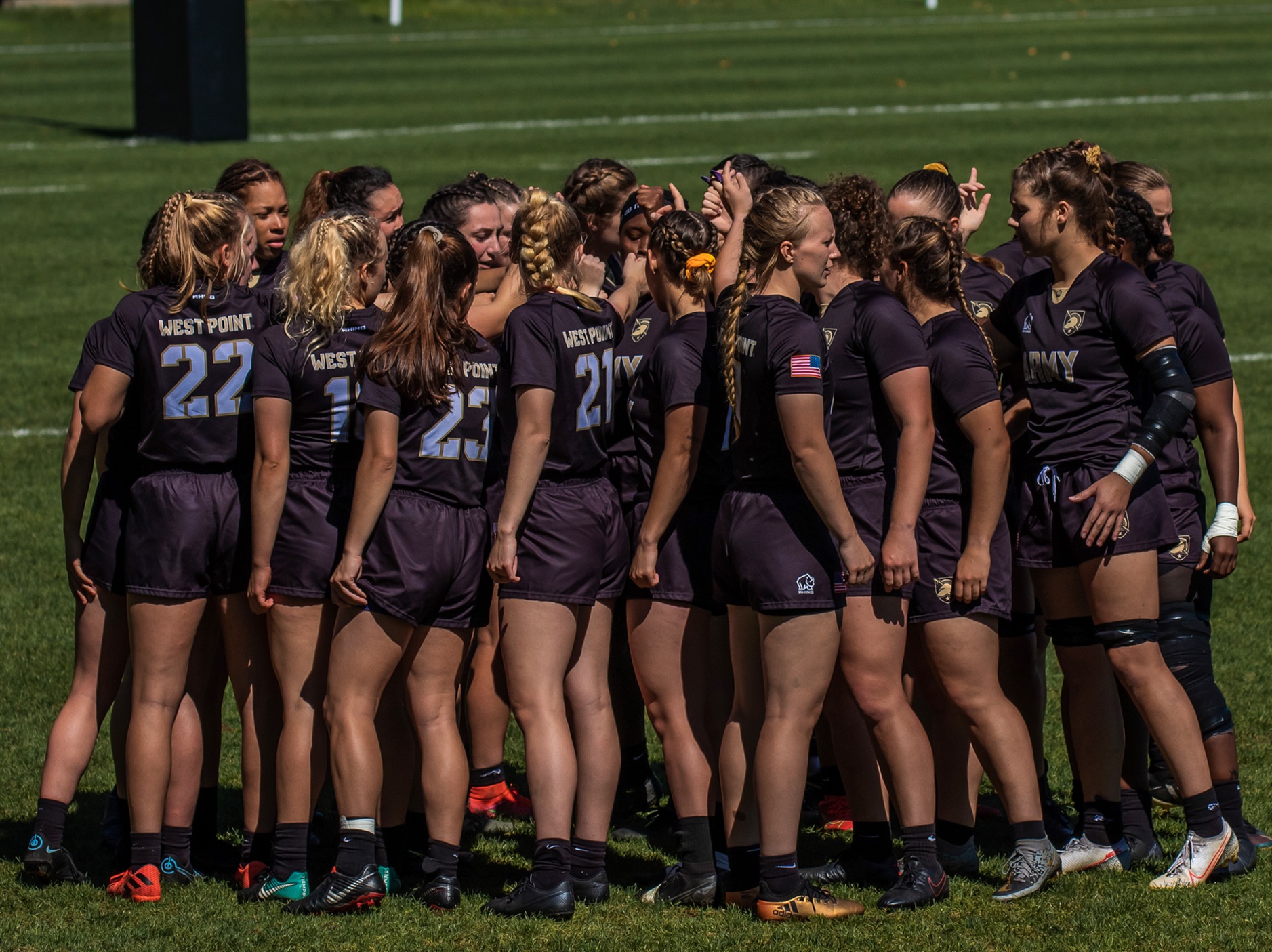 Army finished third in the DI standings, dropping regular-season games to #1 Dartouth and #2 Harvard in October. The Black Knights and Crimson met on Oct. 30, and the latter banked a 22-7 victory in Cambridge, Mass.

“In the first game, the team was pretty disconnected. We weren’t moving the ball as well as we wanted to and the offense was pretty broken,” Army co-captain Rebecca Syrup said. “And we started slowly and that allowed Harvard to get the upper hand in the beginning of the game. In this last game, we wanted to have a better mindset going into it. We wanted to score first and really set the tone for the rest of the game.” 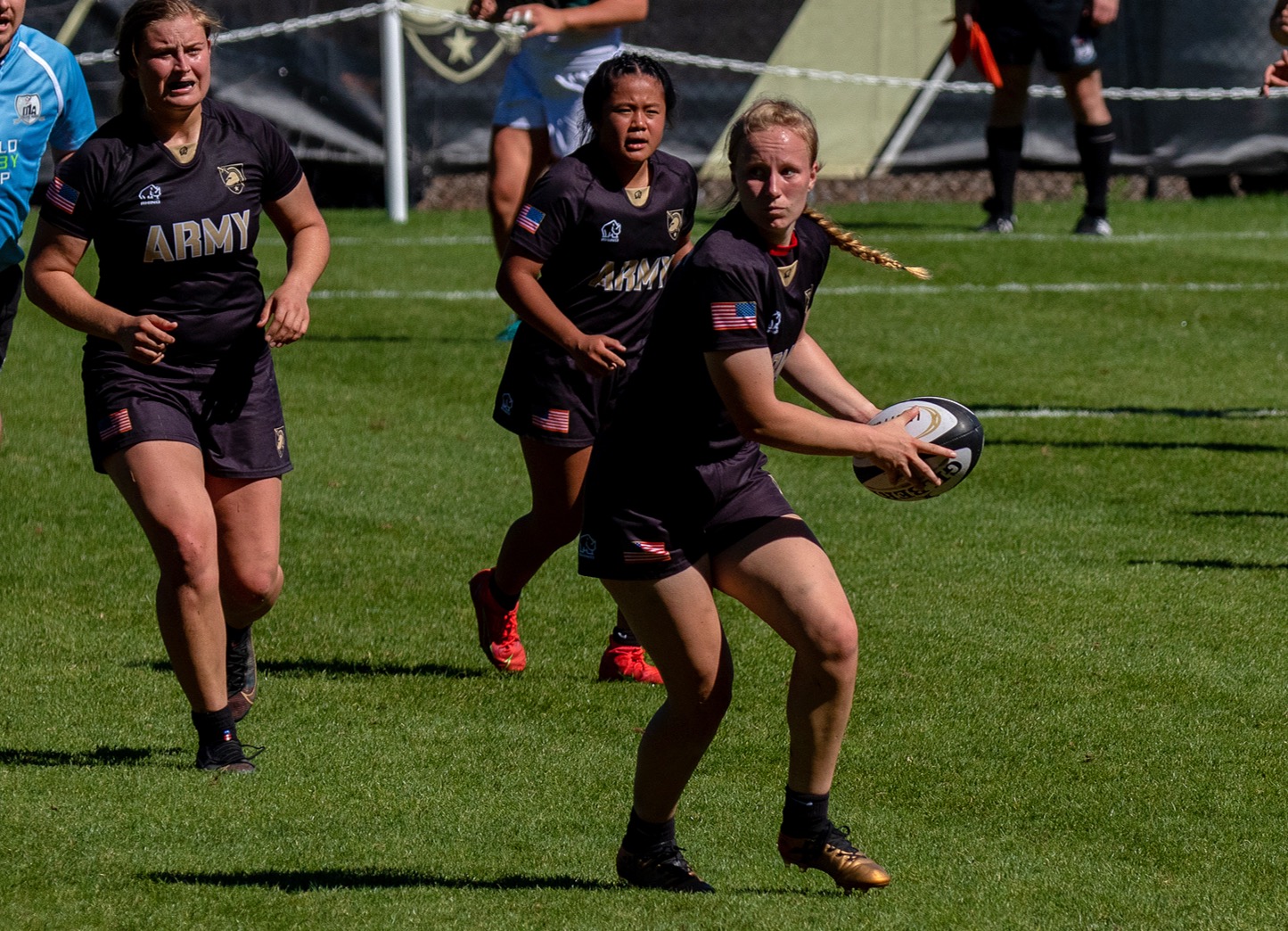 There’s a big mental component to starting games at full pace, and it’s why lots of squads describe themselves as second-half teams. In the week leading up to the semifinals, the players worked through daily mental imagery exercises. The team then had its final training session before game day at Harvard and in the rain. Positive attitudes reigned.

“We weren’t thinking about winning or losing. We just wanted to play a good game of rugby,” Syrup said. “That calmed us down. Our first game against Harvard, we went in nervous. We took a step back and focused on good rugby.”

Army ticked its first objective off the list when Kaylee Cargile broke free and connected with freshman center Sophia Linder for the game-opening try.

“Kaylee had torn her labrum and wasn’t able to play against Harvard last time,” Syrup said. “She’s a key line-breaker for us and does a great job putting people into space and setting up tries.”

Army fed off of the crowd’s energy, even when Harvard overturned the lead five minutes later. Crimson senior Michelle Groth scored for the home team, and sophomore Brogan Mior converted for the 7-5 lead. 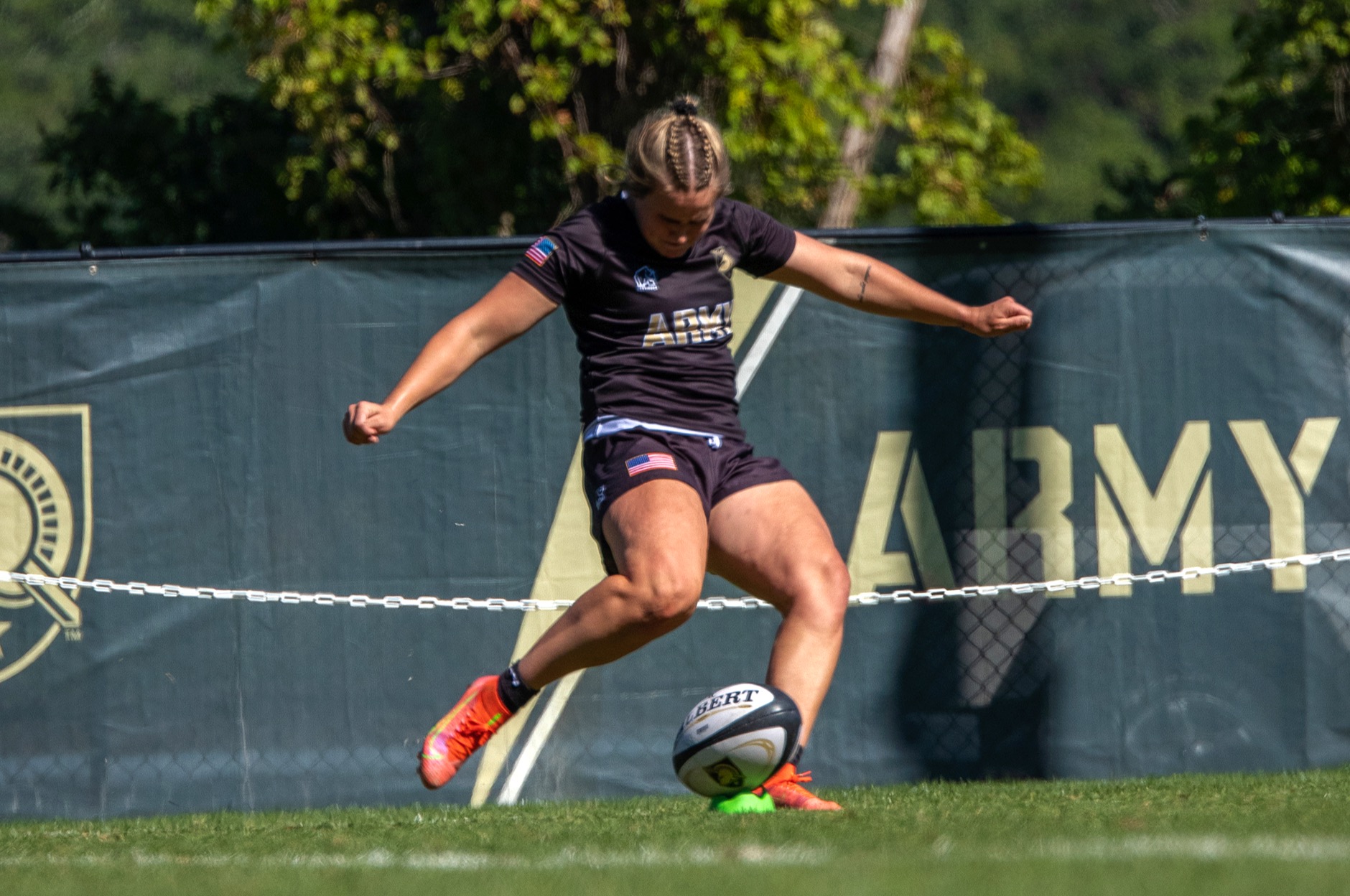 “The first game, we fell apart emotionally after Harvard scored,” Syrup said. “When Harvard scored to make it 7-5, I looked around and no one was nervous. We just continued to push forward.”

Army didn’t panic and continued to focus on some new game strategies that came out of the teams’ first meeting. For one, Army upped its kicking game and rallied around flyhalf Kaitlyn Schwarting. The senior had an injured hip during the Oct. 30 match but was able to put the ball into Harvard’s end more regularly on Saturday.

“We were calmer, and we were able to slow the game down and hold onto possession more,” Syrup said. “Overall, there were fewer knock-ons, the scrums were a lot better and the lineouts were good. From a forwards’ perspective, we tightened up our offense a bit. Harvard’s line speed is pretty fast, so instead of trying to move it wide all the time and getting pushed back, we played a little closer and hit it up the middle.”

Fullback Codi Butt added a penalty kick and then converted Linder’s second try for a 15-7 lead. Harvard’s Alex Pipkin then sent a perfectly placed kick for Emma Kearney’s chase and try, which Mior converted: 15-14 into the break. 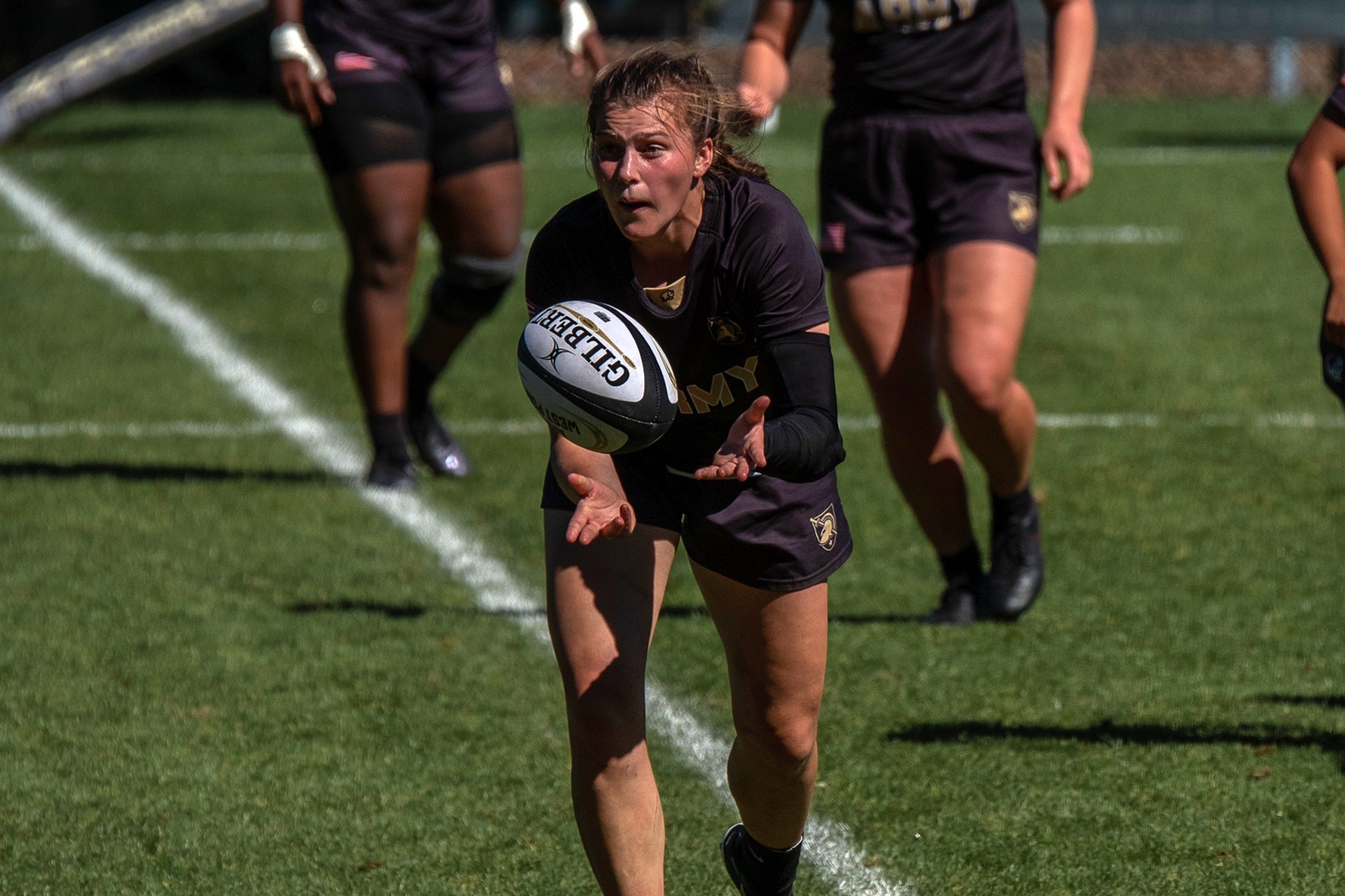 Army co-captain Sydney Schaaf scored in the third quarter (20-15) and then with 10 minutes to go, Mior added a penalty kick to close in, 20-17. Harvard was pushing for one more score, but it was Butt who broke free with approximately two minutes to go. The fullback was pulled down just short of the line, but Linder was there for the final pass and try, 25-17.

“Honestly, everyone flourished in this game,” Syrup said. “Sophia Linder had a hat trick. She’s a freshman so she hasn’t been with us for long but she came out and was stellar everytime she got the ball, just running through people. It was amazing. Kaylee Cargile, she is always a key player when it comes to our offense, and defense. [No. 8] Julia Riekena, she’s the key between the forwards and backs. She runs a lot of lines off our 10. And then obviously Codi Butt. Her kicking game has been on this entire season. Her penalty kick that put us up three points sealed the deal for us.” 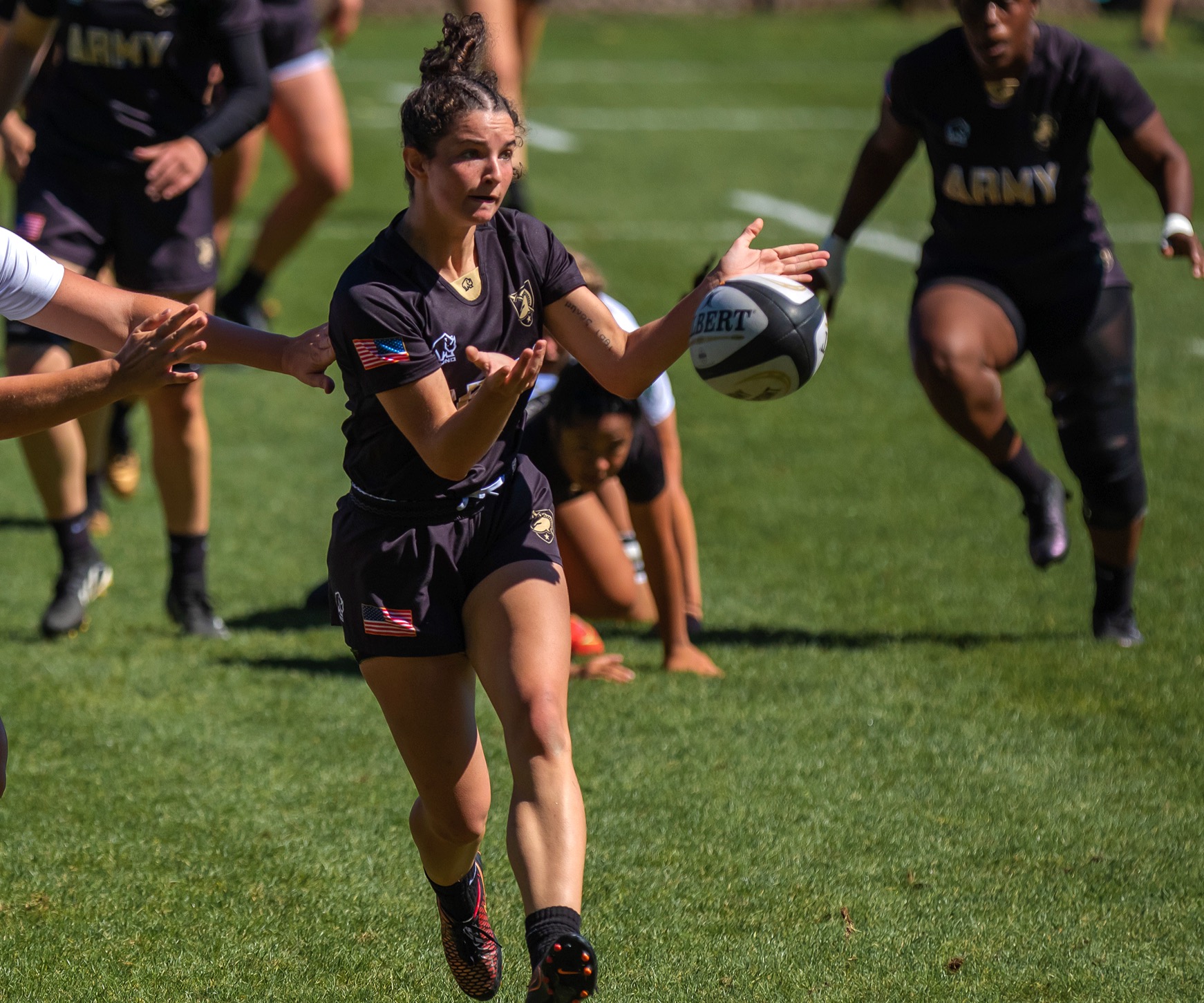 Both Army and Dartmouth are making their third appearances in the NIRA national championship, which takes place this Saturday, Nov. 20 at West Point, N.Y. When the teams met on Sept. 19, Big Green won 34-28. but only the Big Green has a title to its credit.

“Dartmouth is very tough, as tough as Harvard was. We know their offense is pretty strong and they have really fast people on their outside. Their line speed is incredibly quick, too,” Syrup said. “I think we’re going in with a similar strategy [as we did against Harvard] because we had trouble with Dartmouth’s line speed the last time we played them. And again, we’re going to focus on playing good rugby because we can be in our heads too much. We’ll take these next of couple of days to of course recover and then focus on the strategy we had in the Harvard game, because that worked really well for us and we played our best rugby all season.”

Another great game is on tap.