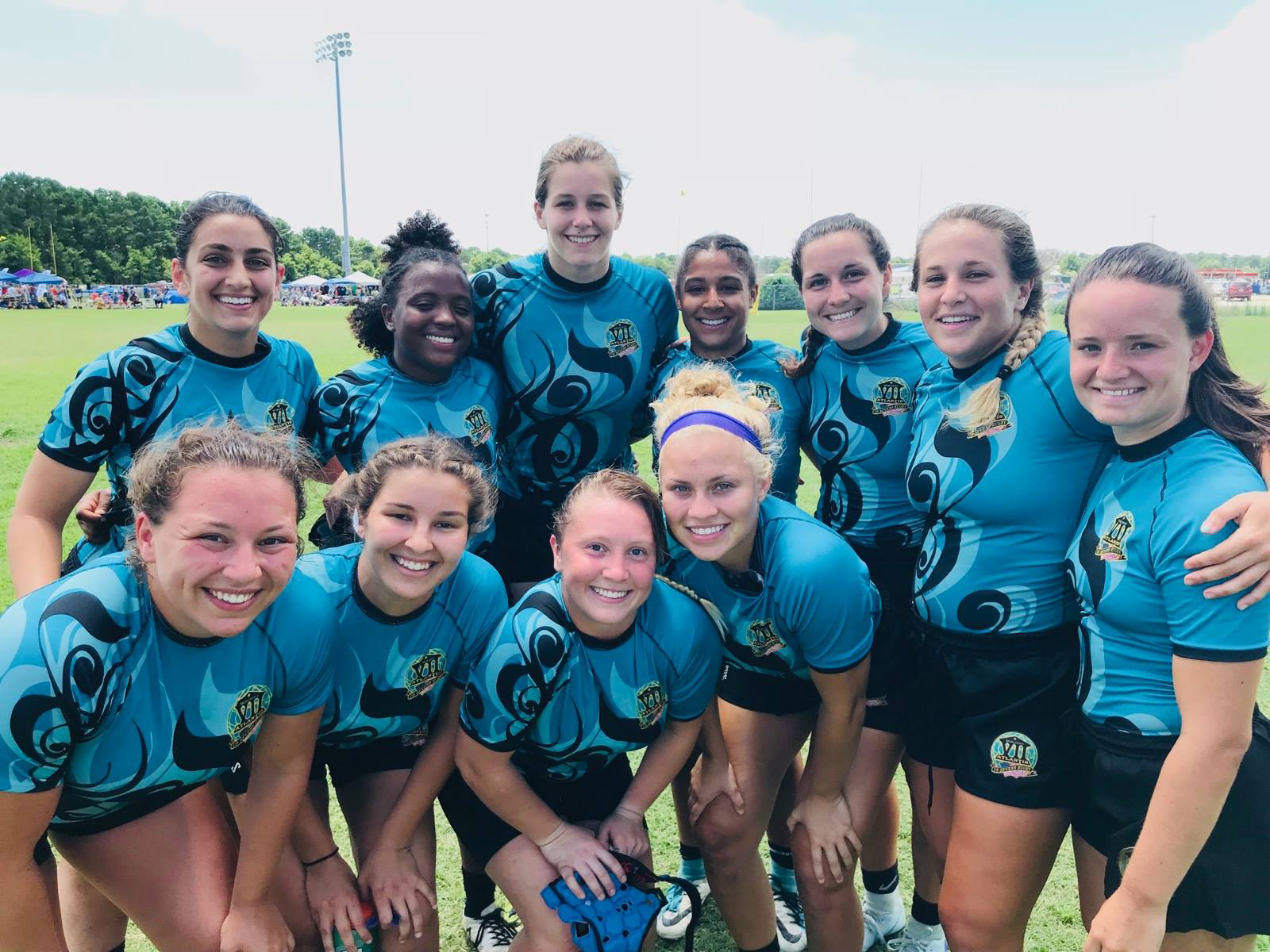 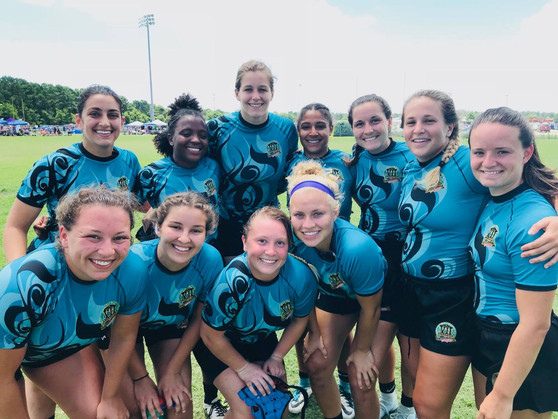 With last weekend’s Cape Fear 7s, Atlantis added another age-grade team to its girls and women’s offerings: U23s. Players can now enter the select side system at the U16 level and continue seamlessly to the senior club level.

“The catalyst for the team was that we at Atlantis realized that we needed to provide a ‘bridge’ for our former high school players, now in college, to the women’s teams,” explained Atlantis U23 coach Tom Feury. “So, youth women’s director Wayne DiMarco, manager Diane Ramage, and I discussed starting this effort this year, as the players from our first Atlantis high school teams were now seniors in college.” 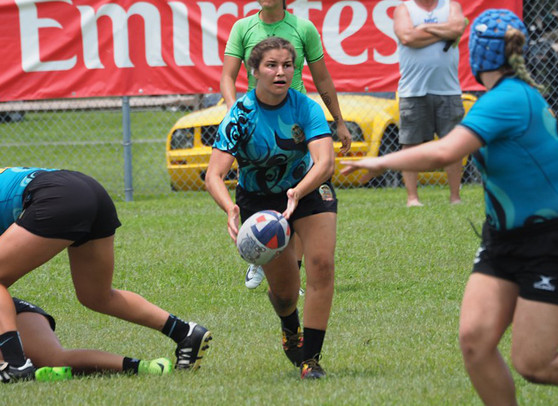 “Tess’ Penn State teammates, Gabby Cantorna and Gianna Solomon, were key components to our competitiveness,” coach Feury commended two of the Atlantis newcomers. “In my opinion Gabby was the tournament MVP for Atlantis, as she had some big defensive hits and set up several tries in addition to scoring her own.” 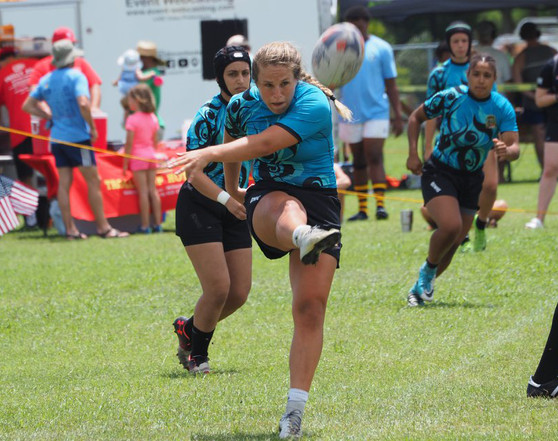 Tess Feury was also the link for Harvard’s Haley Langan, both of whom represented the USA at the 2014 Youth Olympic Games in Nanjing, China. Langan, an All-American, provided the height for winnable restarts and was stellar in the rucks. Cowan’s Quinnipiac teammate, Mikah Maples, came in fresh off a stint at Chula Vista, where the power center represented the Women’s Collegiate All-Americans at the NDA 7s.

Notre Dame College’s Jessica Fox also arrived through an Atlantis alum – her father, Jason, who is now the director of rugby for the Falcons. Atlantis coach Kevin Corley, now at Life University, recommended Kennesaw State standout Akilah Guzman, and Queens University of Charlotte Director of Rugby Katie Wurst praised Indiana star and current Royals member MiKayla Tatum. Coach Feury was pleased with all of the new players’ performances and is eager to see them again in the teal jersey. 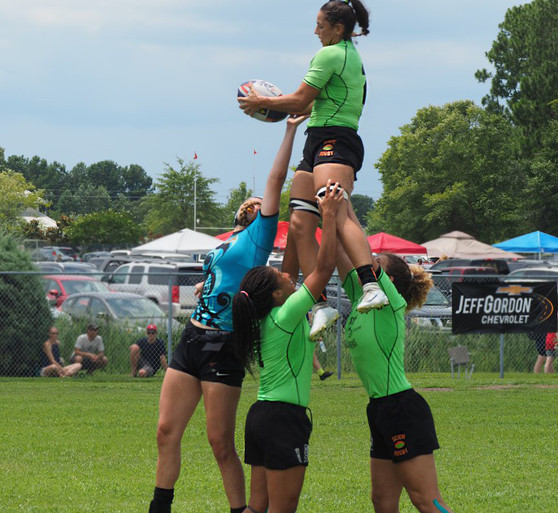 In North Carolina, Atlantis went 1-2 in pool play, losing its opener 27-12 to ARPTC and second game 24-0 to eventual champion Scion. But Saturday ended with a 27-24 win over nationals-bound Atlanta. That game was punctuated by Maples’ power runs through the center, and the Bobcat scored three tries in the match. Tess Feury’s speed on the edges also put points on the board.

The eight teams were reseeded for Sunday’s knockouts, and coach Feury called the quarterfinal against NOVA the squad’s best performance of the weekend. The communication and cohesion were clicking, and the U23s defeated the Mid-Atlantic powerhouse 19-7 on two tries from Feury, who also handled the conversions, and one from Solomon. 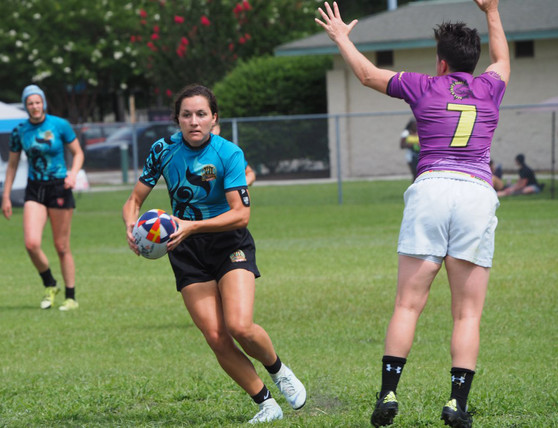 “As often happens in sevens, after an impressive upset, we settled for some lazy play, which led to a couple quick tries for the opposition,” coach Feury transitioned to the 27-5 semifinal loss against Berkeley. “It was not until way too late did we decide we were not going to be shut out that we worked together for a final try [courtesy of Solomon].”

Cape Fear 7s was a good start for the new U23s side, especially for competing in a senior elite division that included five teams vying for inclusion to club 7s nationals. There are two more fixtures on the calendar for the remainder of this year. The NAI 7s (Aug. 1-4, Salt Lake City) announced a U20 division and so Atlantis is looking to field a mostly underclassmen team, and then the New York 7s (Nov. 24, NYC) will see a combined roster between NAI 7s and Cape Fear and potentially a few club members – thus completing the “bridge,” per Feury. 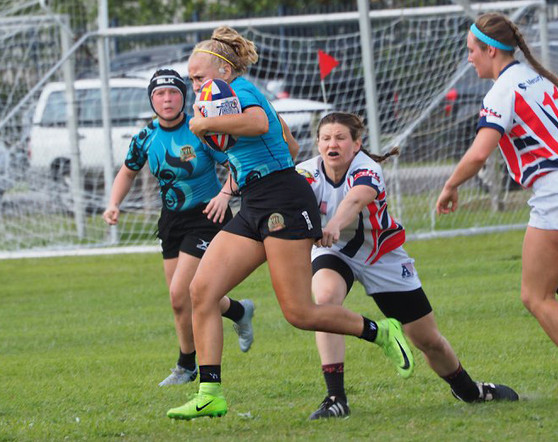 Atlantis is still looking for players to fill out the U20 roster (1998 birthdate or later) for NAI 7s, so interested parties should contact Tom Feury at tomfeury@optonline.net.