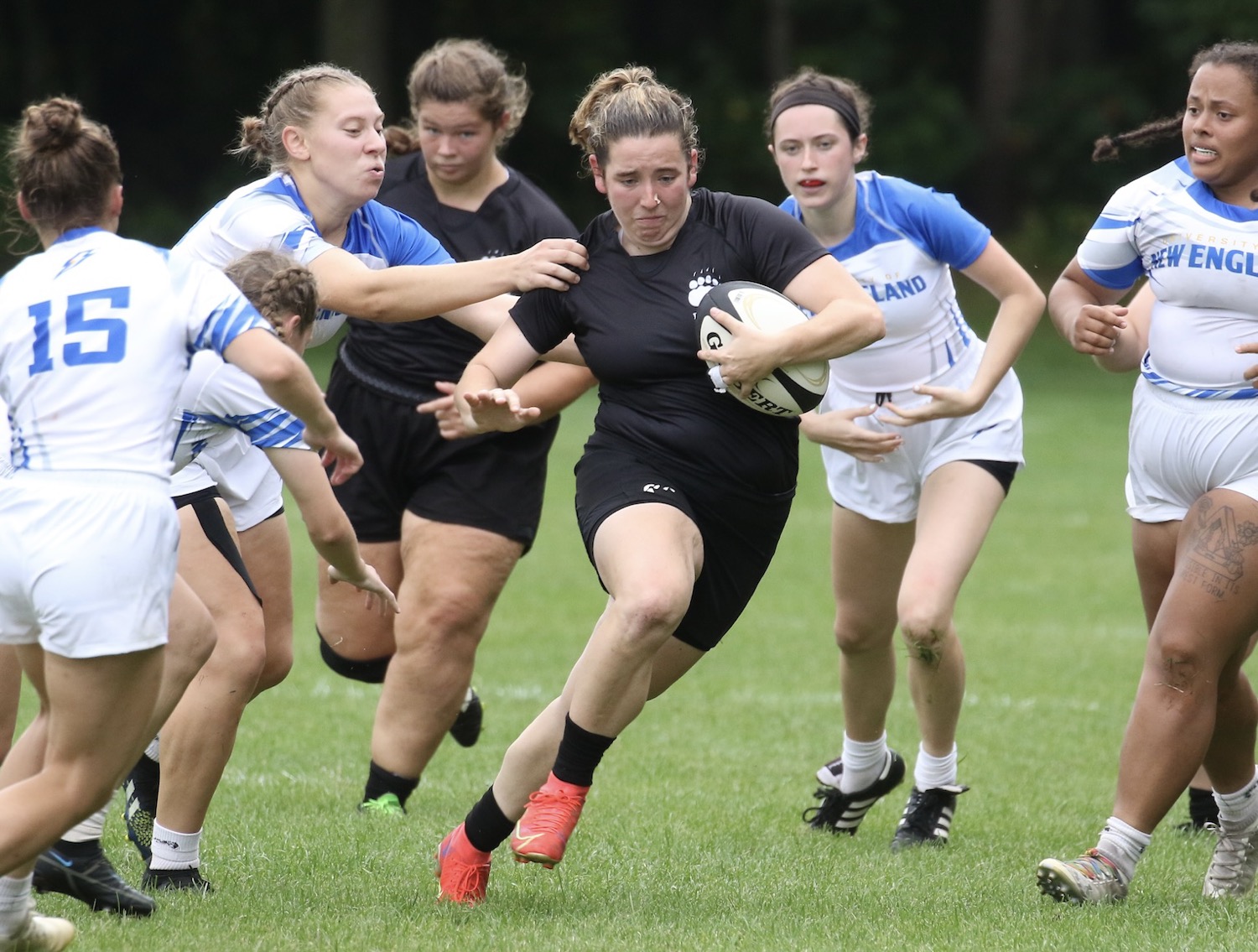 Bowdoin College is the reigning National Intercollegiate Rugby Association (NIRA) DIII champion and has the opportunity to defend its title after win its semifinal against Colby-Sawyer College. The 2021 championship is a rematch of the 2019 title bout against the University of New England, reigniting a rivalry that dates back to the first years of NIRA.

Bowdoin won its three regular-season matches by comfortable margins and filled its schedule with local and last-minute friendlies. There was one non-league game in particular that was circled on the calendar.

“We had this meeting in the very beginning of the year where we set goals,” said Bowdoin freshman and varsity flanker Ella Slaby said. “The first goal that was shouted out was, ‘Beat Vassar.’ Our seniors have history with them. We had never beaten them before but the games are always close.”

As a freshman, Slaby didn’t have context for this relationship but did some research and noted single-digit decisions between the teams the last few years. As the season elapsed, Slaby understood that Vassar was going to give the Polar Bears the test it needed. It was a seven-hour bus ride to Poughkeepsie, but the team was focused and locked in for the Oct. 17 match.

“It was back-and-forth in the very beginning. They did score first, but we were really resilient,” Slaby recounted. “Everyone just clicked. We had one really nice try where one of our seniors kicked a cross-field ball to another senior, who caught it in the air and ran 80 meters for a really awesome try.”

Bowdoin won 26-17 and the experience was important to the second half of the season. 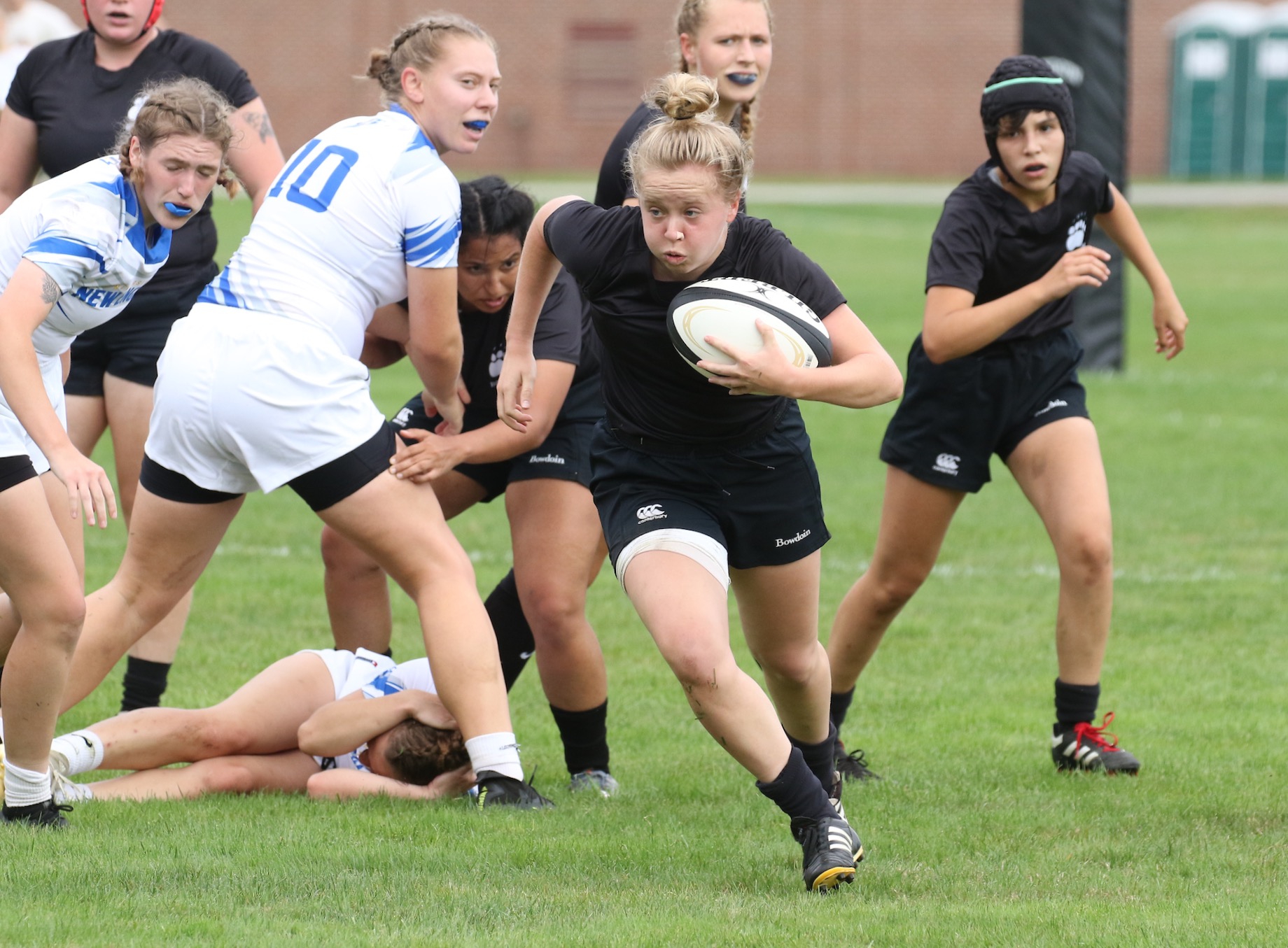 “In previous games, we were coasting to wins and with lots of players scoring multiple tries – hat tricks – every game,” Slaby said. “This was the first time this season where we experienced such a close game. Vassar is such a physically aggressive team, and everyone was super nervous before the game and even during it. It was our first contest and we came out of that a much more confident team.”

Slaby also highlighted the Army B game (36-0 win) as another opportunity for the team to unite under more competitive conditions. These games were also important to first-years like Slaby, who was recruited to the team and part of a larger incoming class than normal. Slaby played high school rugby (10s) in China and then the summer before senior year moved to Minnesota. There, she played 7s with Hopkins and senior club Metropolis, a team coached by USA U18 head coach Martha Daines. She was quickly identified and introduced to the age grade pathway, and will attend the USA U20 winter camp this December.

With that said, this fall has marked the newcomer’s first experience with 15s, but she, like several first-years, has made an immediate impact.

“The speed of the game was a lot higher than I anticipated, but it’s been really good for me to learn 15s at such a high level,” Slaby said. “Our team is very technically skilled. [Head coach MaryBeth Mathews] told me that this year our skill level has skyrocketed. I was a recruit but a lot of walk-ons have come on and picked up the game so fast and are amazing. We have a lot of speed as well, which I like. I’m a fast player and it’s nice having people who can keep up with you.”

Slaby spends the most minutes at openside flanker but experimented at outside center this week (“That was interesting.”) The USA U20s have also mentioned fullback. The freshman forms a nice pairing with wing Molly Petronzio, the league’s leading try-scorer. Once the scrum breaks out, Slaby is often placed near Petronzio on the sideline and enjoys connecting with and supporting the senior on breakaway runs.

Bowdoin finished the regular season 3-0 against DIII opponents and earned home-field advantage for last Saturday’s semifinal against Colby-Sawyer College. When the teams met in mid-September, the Polar Bears triumphed 79-0.

“One thing our coach said, ‘Everyone likes an underdog story and we’re not the underdogs,’” Slaby said of the mental preparation ahead of the semifinals. “Colby-Sawyer has been working really hard and they came to us a vastly improved team. They were much more physical and put in many more hits. Going in, we were prepared for more of a battle and that mindset paid off.” 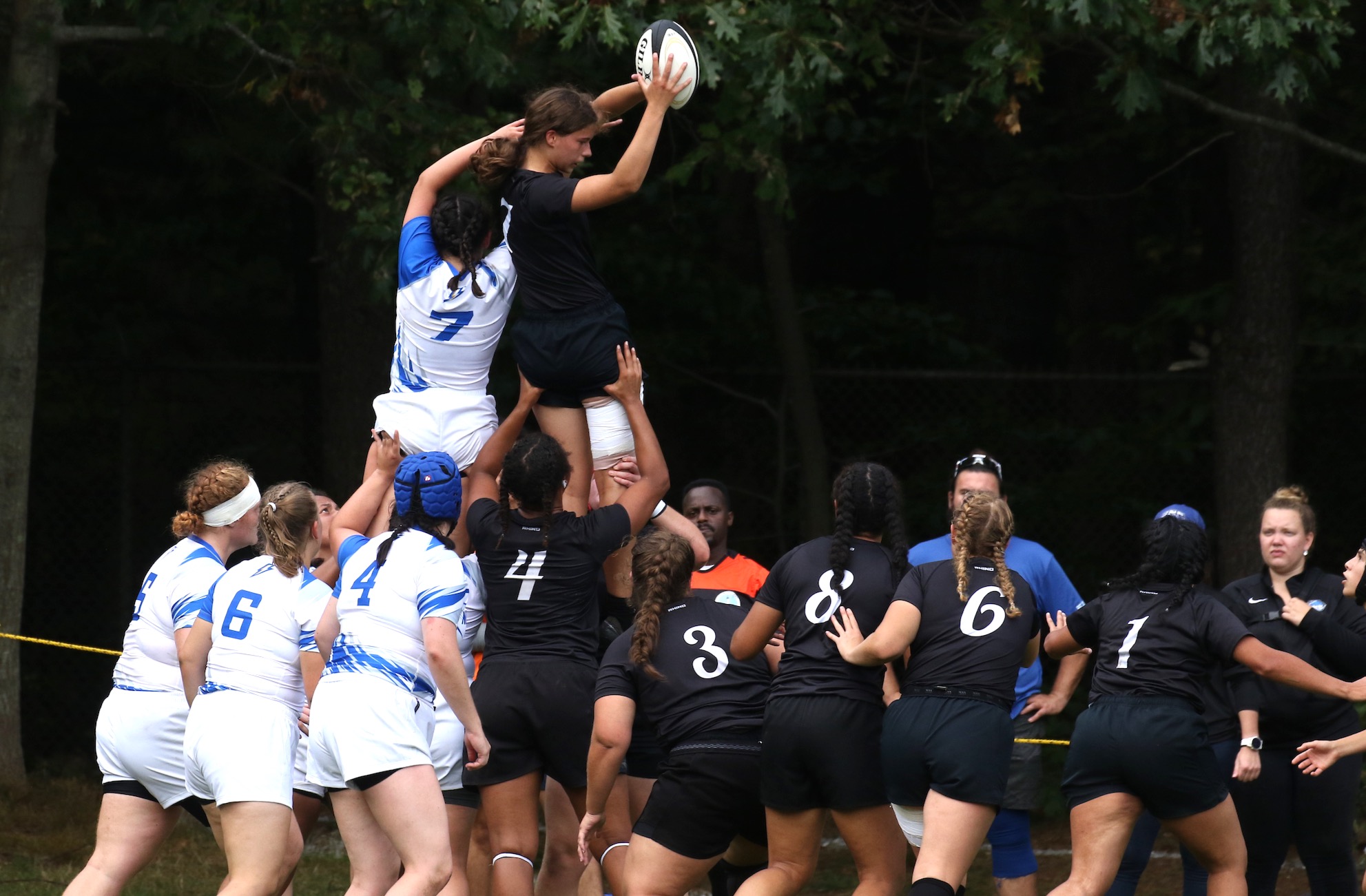 Bowdoin did get into some penalty trouble and needed to recenter.

“One big one for me is senior captain Jenna Clukey,” Slaby said of a stabilizing force. “She’s great at keeping a level head and helping people reset when things go wrong. Both captains are really good at that – the other being Ashlynn Autrey.”

Bowdoin took a 28-0 halftime lead as Autrey, Petronzio, Jorja Markella and Sadie McClean scored tries, and Petronzio was perfect on conversions. Freshman Rebecca Vakarau and Petronzio scored two tries apiece in the second half, while Petronzio (2) and Lauryn Eisenhart added the extras: 54-7 the final. Vakarau (12) and Slaby (10) led the team on tackles, and Slaby also recorded three steals.

Meanwhile, Univ. New England bested Norwich 32-5 in the other semifinal, earning a return trip to the DIII national championship.

“We’re super excited,” Slaby looked toward Sunday. “This is a rematch of the 2019 final, and while I didn’t play, the juniors and seniors are very excited to have that rematch. We’ve both had time to improve and we’re expecting [Univ. New England] to be better. We’re hoping for a good rugby game.”

Slaby confessed that there are also competing anxieties, especially for the first- and second-years who are staring down their first opportunity to compete in a varsity final.

“This is my first national championship, so there are definitely some nerves,” Slaby said. “But the seniors have done a good job reassuring people that it’s just another game. Yes, the stakes are higher but they’ve been there before, and they’re being great leaders on and off the field.”

The NIRA national championships occur at West Point, N.Y. The DI final is Saturday night, while the DIII championship is Sunday, Nov. 21 at 1 p.m. EST. The DII final follows at 3 p.m. Read more for ticket info and detailed attendance information.