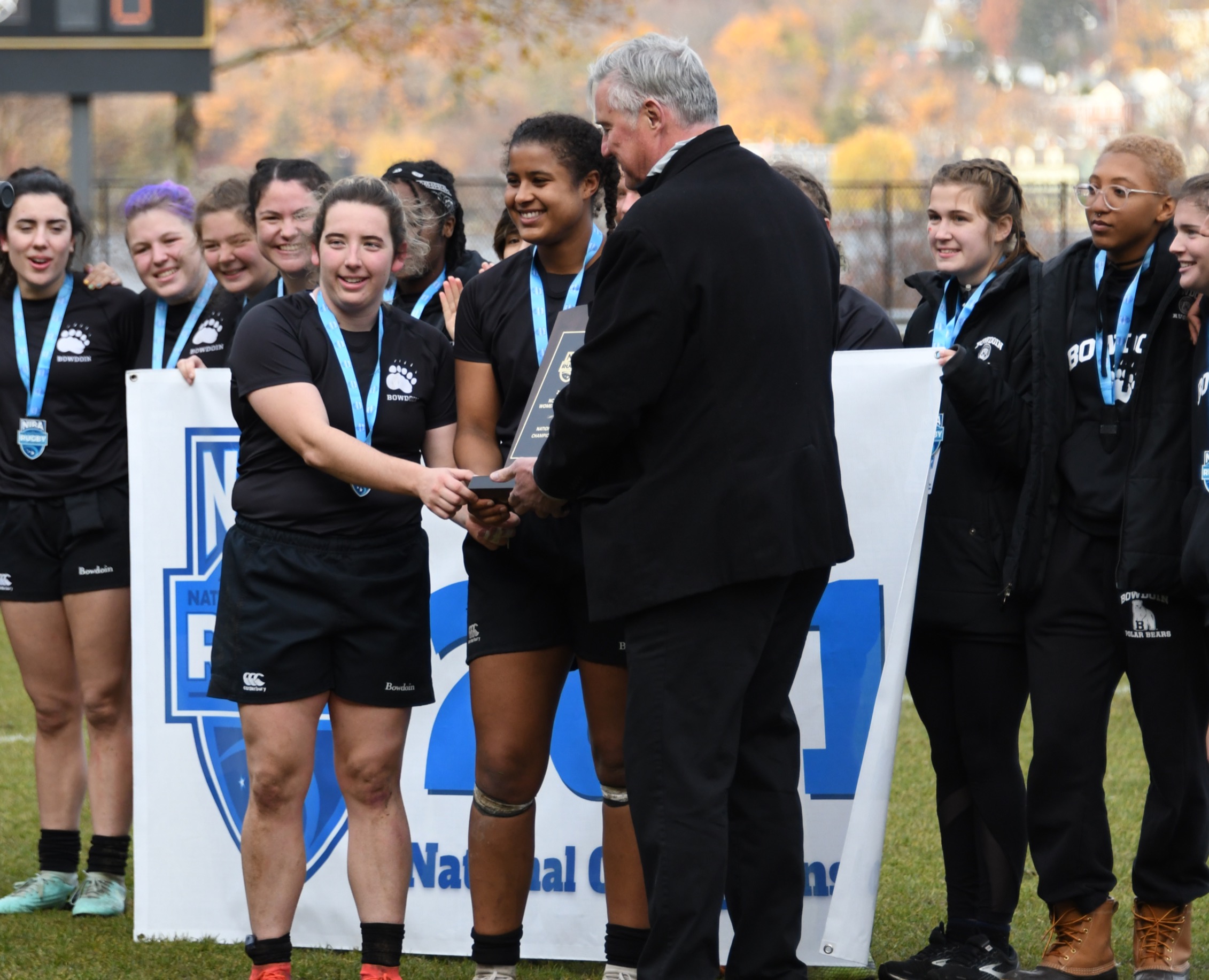 Bowdoin and New England contested the 2019 title match against each other but the Maine programs have longer history in high-stakes matches, dating back to when NIRA was divided into tiers and not exclusively NCAA divisions. When the teams met for their regular-season match on Sept. 25, Bowdoin won 41-12, but Nor’easters captain Alyssa Ehrenfried explained that UNE had made some significant gains in time for the rematch. 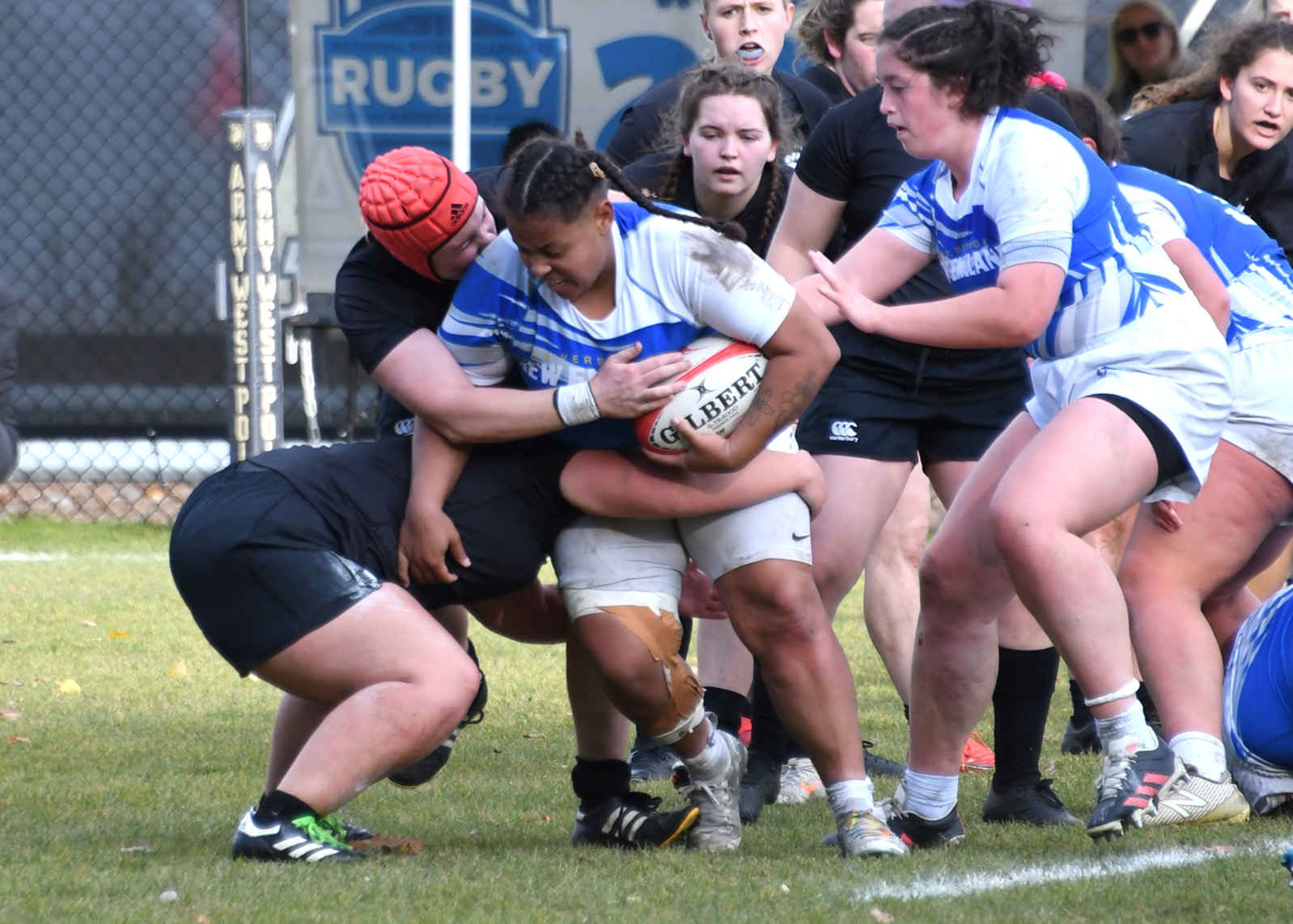 But Bowdoin was different, too. Autrey explained that the team was eager to showcase its offense to its full extent. The attack had been building all fall, adding pieces with each game, and the team now had options in reacting to defenses and creating opportunities.

“We really wanted to work toward running straight, drawing in the defenders, so that our wings or second person outside the wing … had the space to go and make the try or make that last pass,” Autrey said of additional game goals. “We did a really great job of getting the ball out to our wings and putting them in a position to score instead of just giving it to them and expecting them to make the opportunity for themselves.”

Defensively, Bowdoin readied for UNE’s strong forward pack and its pick-and-go game. The players committed to those tackles in close, and while the Nor’easters were able to make those hard meters, the Polar Bears were happy with their ability to challenge that go-forward. 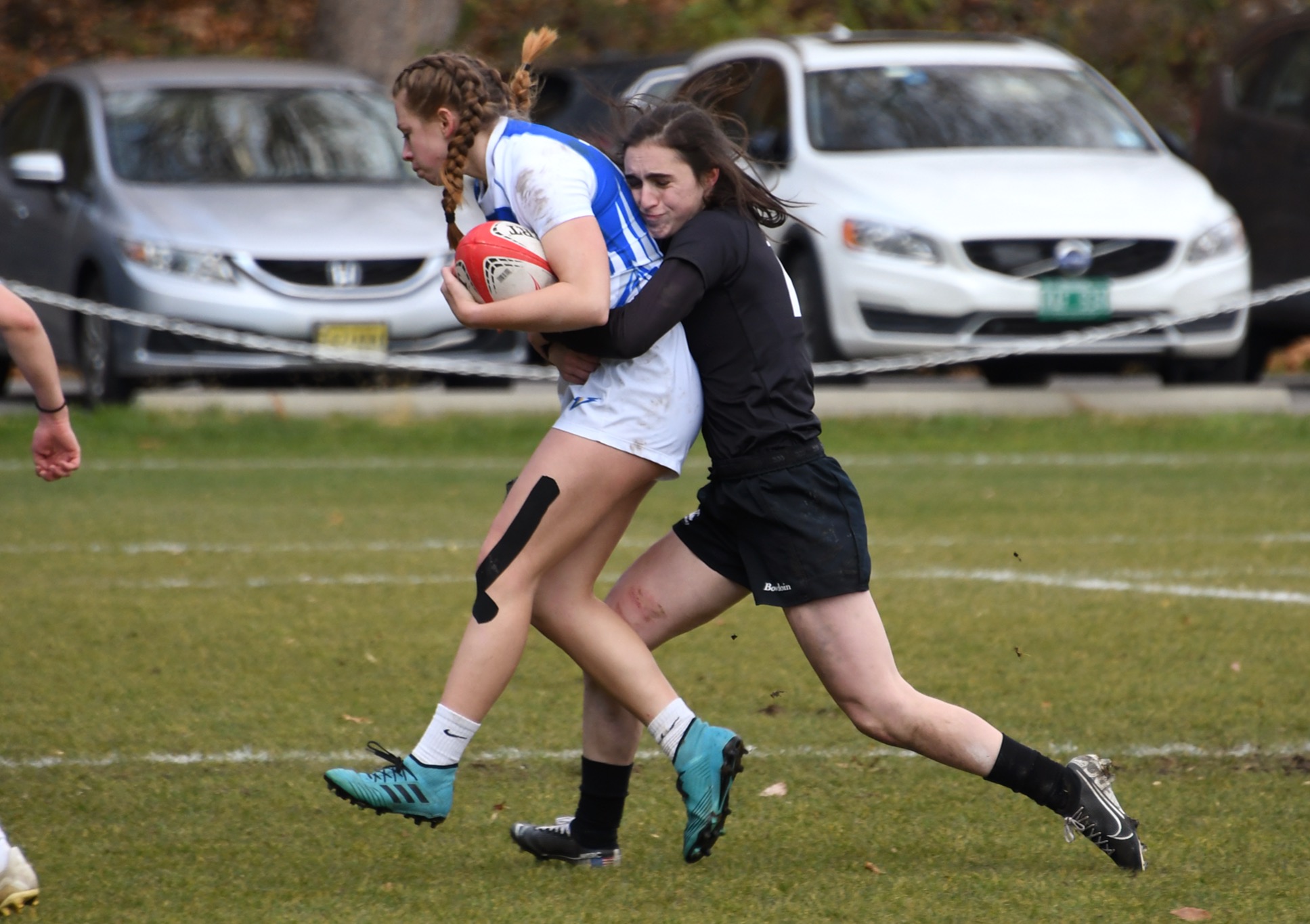 The first half was relatively close. Bowdoin opened with three solid minutes on attack, not only looking crisp skills wise but showcasing some opportunistic play – like a nice cross-field kick and chase. UNE patiently absorbed the attack and turned over the breakdown for some relief. The penalty kick to touch exited at the 22 and the subsequent lineout was spot-on, but UNE attempted to run the ball out of its end and the defense was eager. Freshmen loose forwards Rebecca Vakarau and Ella Slaby, and lock Sadie McClean led the team with 12 tackles apiece, while Autrey, Colleen Doucette, Jess Yang and Jorja Markella were crucial to frustrating UNE’s attack.

“So few tackles were missed in that game and that was just the great thing,” Autrey praised the team defense. “You can completely trust the teammate next to you to make the tackle and that means you can play defense better knowing that your teammates make those tackles every time.”

The fast-up defense forced a knock-on, and Bowdoin recovered possession. As the referee played advantage, Autrey picked from the base for a nice pierce and then the ball moved wide to Molly Petronzio for the try. The senior wing also converted her score: 7-0 after five minutes. 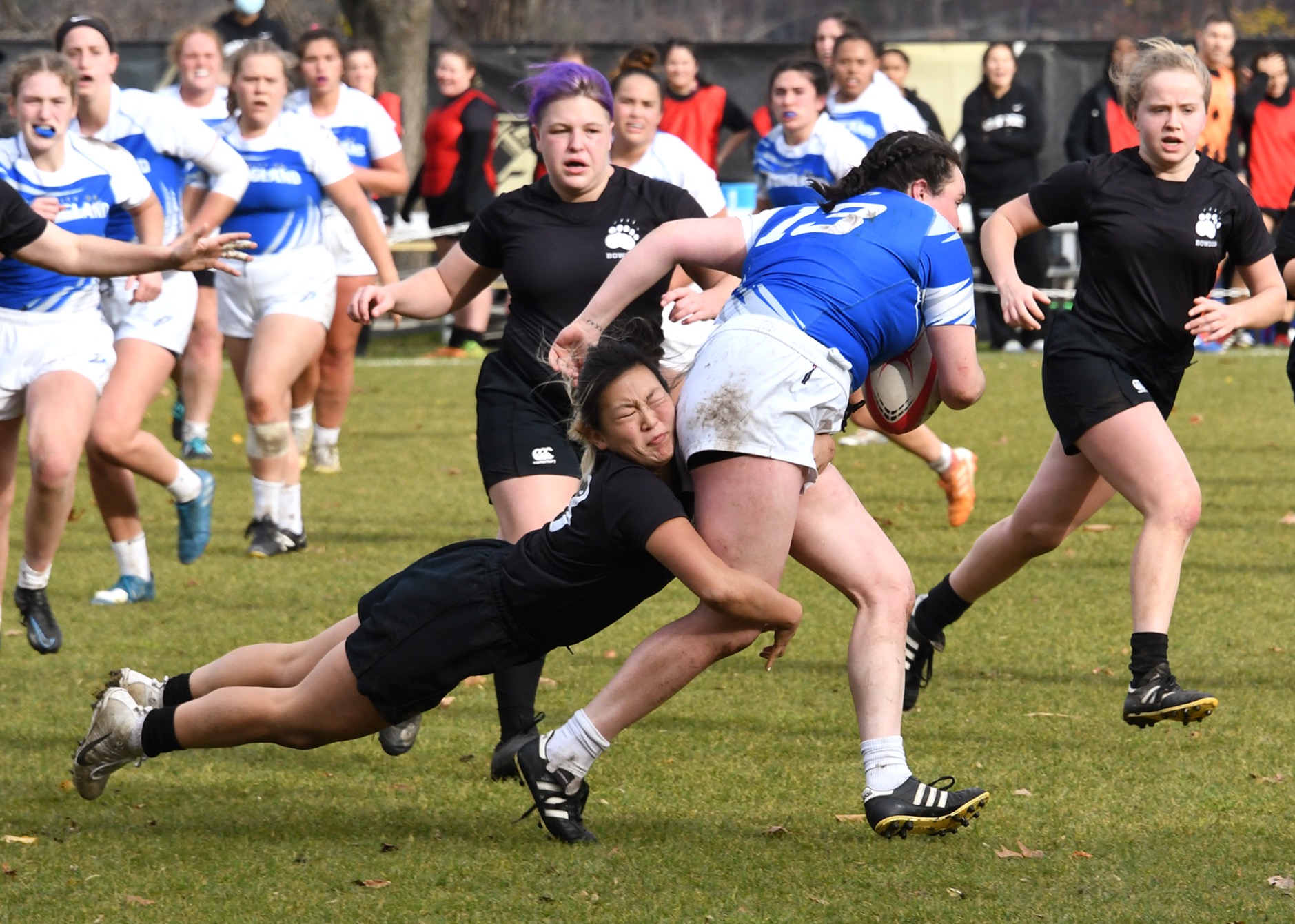 UNE answered right away. The Nor’easters turned over possession from the restart and settled into its attack. Flat passes moved to the sideline, where wing Meghan Smith burst through the line at pace. UNE made ground through pick-and-goes and advantageous penalties. From 10 meters out, Ehrenfried quick tapped through the mark and had too much momentum to be stopped: 7-5 after 10 minutes.

Bowdoin put some distance on the scoreboard in the middle of the half. McLean drew a penalty in the breakdown and Doucette went quickly from the mark. The scrumhalf linked with Autrey for a big sideline break that got the defense scrambling. Inside center and co-captain Jenna Clukey did a great job of pinning the defense with a well timed pass to Yang, who hit Vakarau for the final charge and try. Petronzio’s conversion made it 14-5 to Bowdoin.

Overall Bowdoin had a better catch-pass and moved the ball more efficiently on attack; however, UNE did take advantage of some indecision on the sideline, driving ballcarriers into touch for turnovers. In the set pieces, the Polar Bears dominated the scrums and were able to drive the Nor’easters off their ball, and those were emotional wins as well. 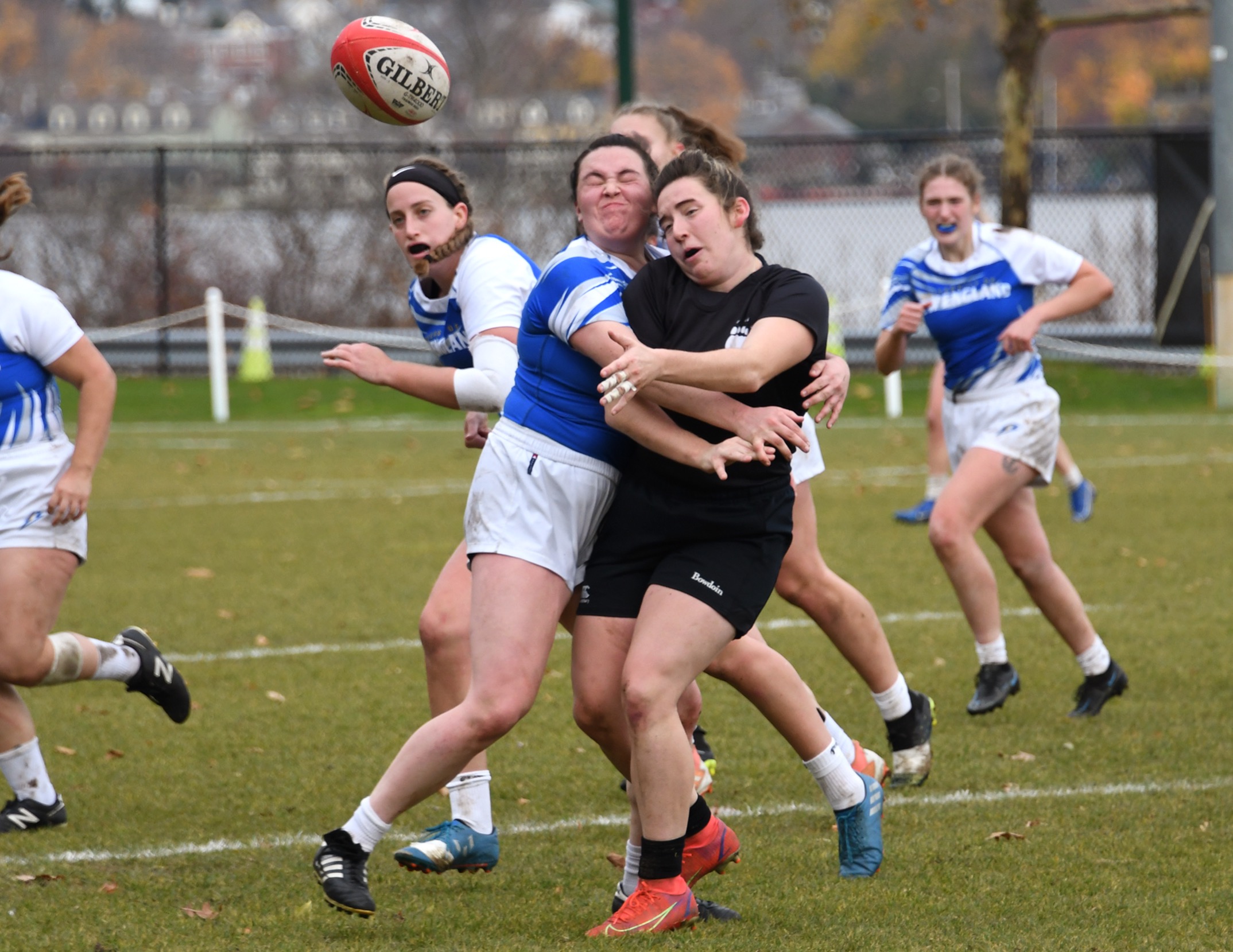 At the 25-minute mark, Ella Garnett made an efficient tackle on Brianna Dargin attempting to run out of UNE’s 22, and Vakarau was well positioned for the poach. The No. 8 went weak off the tackle and had the reach and power to fend off the cover defense, 19-5.

“Ella Garnett, she just really kind of played at such a high confidence level that it was totally visible on the field,” Autrey said. “All season she’s been a great player but in the championship game, she knew she was a great player and she was going to show the other team that. It just really shone through … in the way she made tackles on everyone throughout the entire game; the runs she made on offense where it looked like she just wasn’t afraid going into contact. … It was an Ella I hadn’t seen before that match.

“Obviously, Rebecca Vakarau had such a great game, scoring three tries and one that was over a 50-meter run to score, fending off multiple people,” Autrey continued. “Looking from the beginning of the season and the first games to this game right now, just seeing how much – not only ability, because she’s always been a great player – but the confidence to really take charge in a game and have those kinds of plays.” 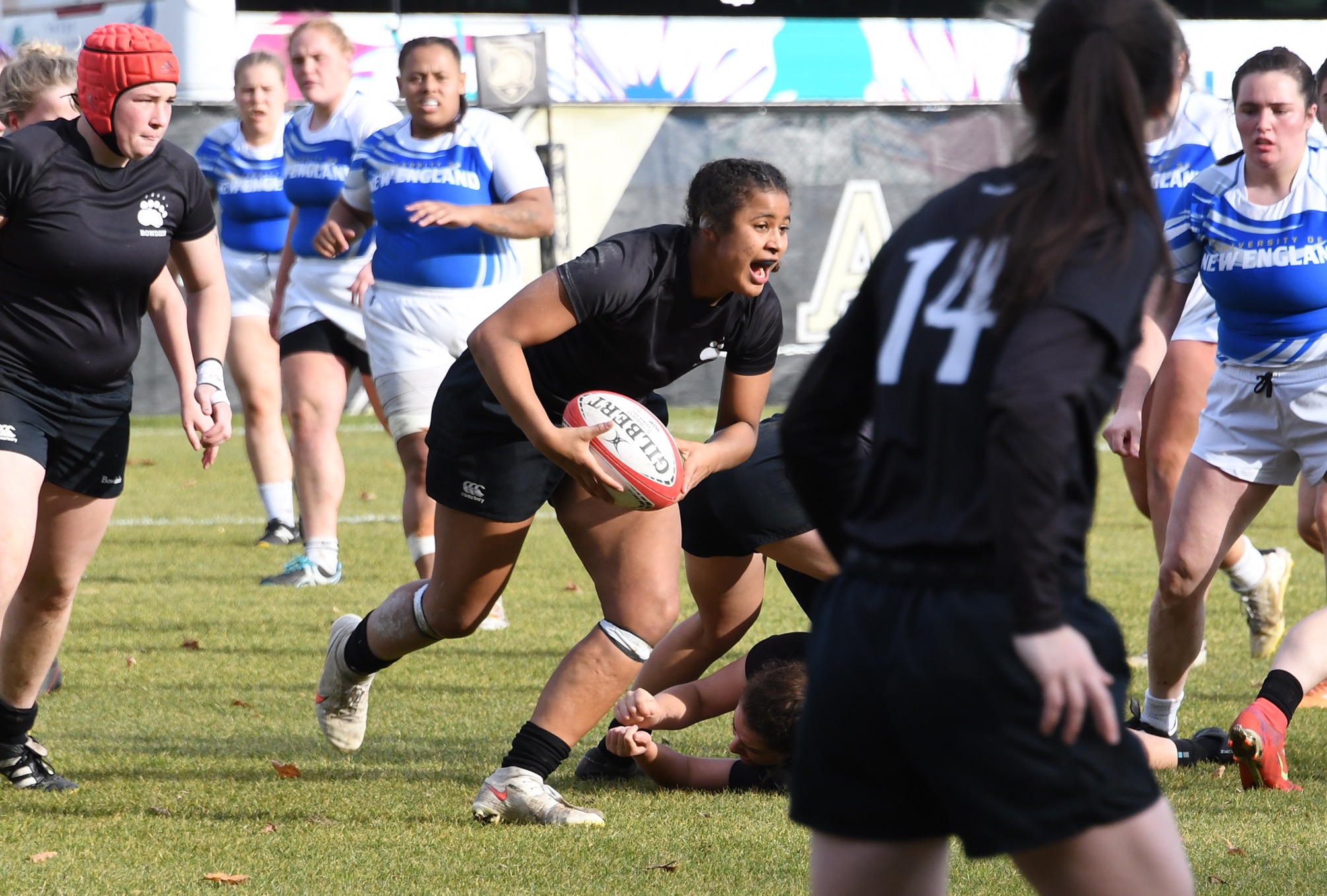 UNE built some momentum in the final 5-10 minutes of the half, but Bowdoin weathered the attack. Autrey in particular was so good about meeting ballcarriers behind the gain line. The Nor’easters ha
d a very good opportunity for points, as Bowdoin was slow to retreat on a quick tap penalty. From the tap, Ehrenfried tucked the ball and barreled over the line, but the Polar Bears were able to hold up the ball: 19-5 into the break.

Bowdoin earned a penalty early in the second half and Autrey went quickly from the mark. The tall, strong lock controlled contact and enabled quick ball to follow. Then when flyhalf Catherine Patti continued the drive, Autrey was the first one on the scene to secure the ruck, and then powered off across the line for the try, 24-5.

Immediately afterward, Doucette slipped through the ruck defense and showcased some nice footwork in open space. Vakarau was there in support as Doucette worked the two-on-one, and the No. 8 took the finishing pass for a third try. Petronzio’s conversion pushed the scoreline out to 31-5. 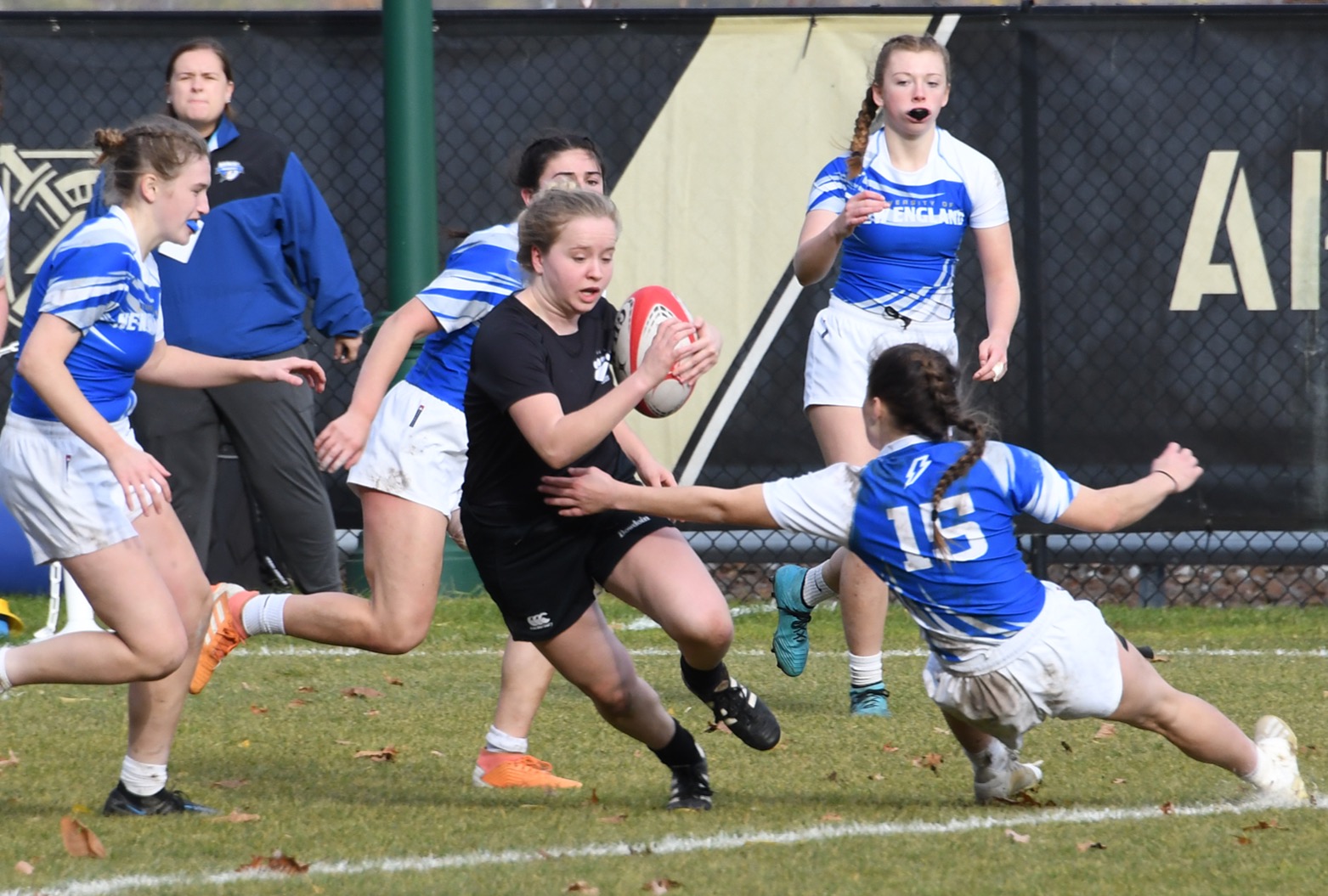 “I also really appreciated our 9, Colleen, that game,” Autrey said. “Colleen’s always been a great player but we’ve had her at 13 or other places in the backline for most of the season. … She just did such a great job and obviously that can be a stressful thing to switch to such a stressful position. I was really proud that she handled that so well and did such an exceptional job.”

The game felt decided, but UNE played with a lot of vigor and possession in the final quarter. The Nor’easters were rewarded with a try through outside center Victoria Bowler, and prop Salma Bezzat kicked the extras, 31-12. The restart went deep, Bowdoin’s chase was fast and pinned UNE on inside its 22.

“That was a moment where, O.K., they scored but it really just showed that we didn’t let that score get in our heads,” Autrey noted the team’s overall confidence. “As a captain and someone who has been working with the team for a long time, I think that was a moment where I was really like, ‘We’ve got this. We know what we’re doing and we can pull through with this.'” 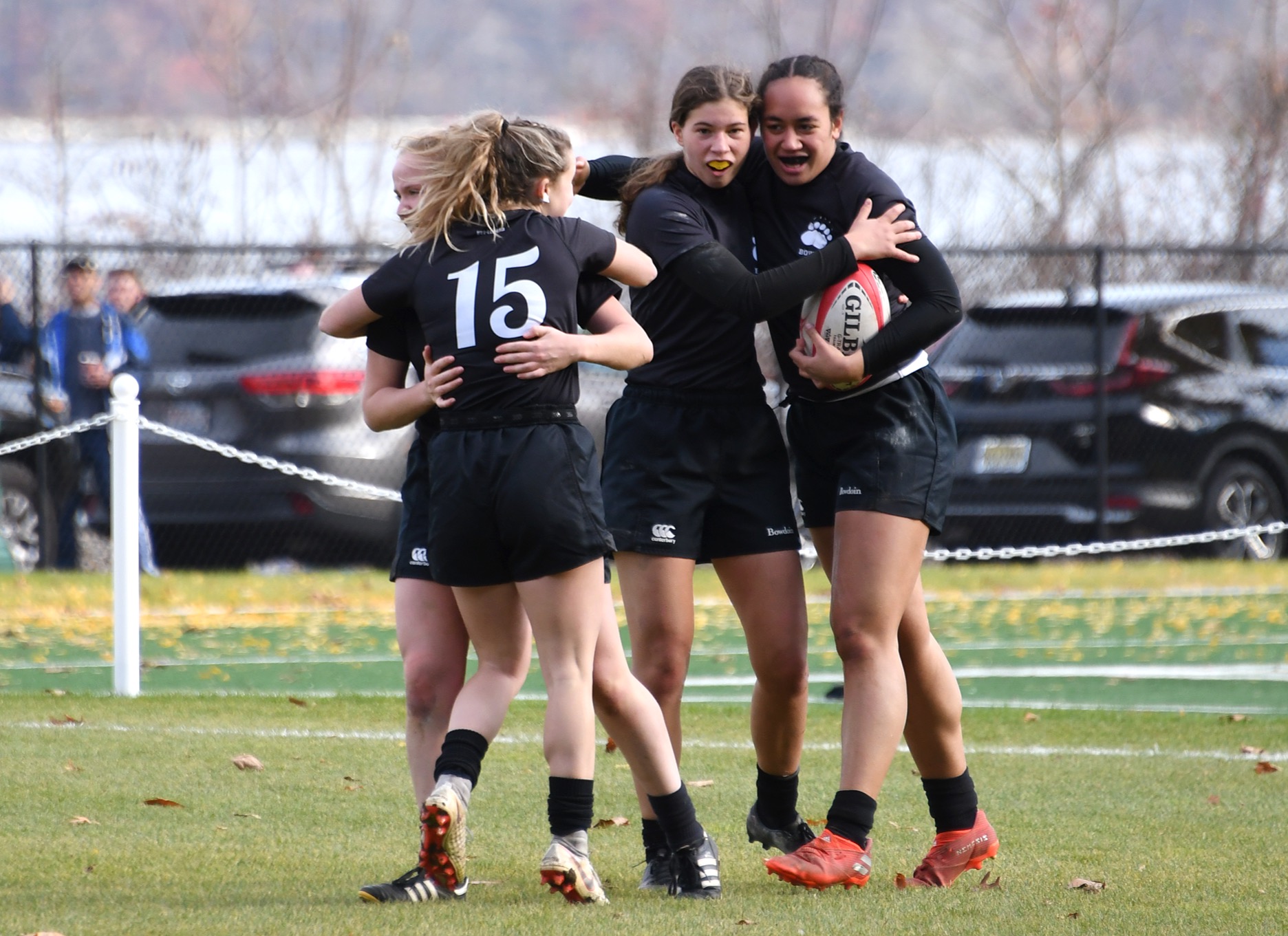 With two minutes to play, a slowly shifting defense and big Smith break put UNE in scoring position. Penalties followed but Bowdoin held up the try attempt: 31-12 the final.

“It wasn’t an easy start,” Autrey thought on how this title run was special. “There was so much uncertainty. We didn’t know what was going to happen [with the season]. So the fact that we all managed to come together and create a championship-winning team, I think that just made it special for a lot of us, especially those of us who had won in 2019, kind of the difference-maker between then and now.”


Palmer Gets 2nd Chance at Nationals