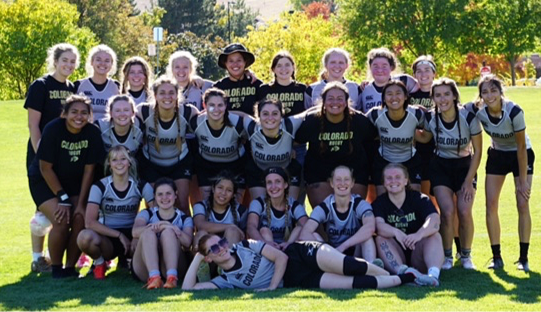 The DI Rocky Mountain conference is divided into two pools, and five of the active seven programs compete in the East group. To boot, the East also has three DII programs that are mixing in for friendlies. On Sunday, Colorado University and Air Force Academy met in a battle of the undefeated, and the Buffaloes prevailed 37-5.

Beth Humphrey joined the Colorado coaching staff in 2015 as assistant coach, and in 2018 took over the head coach position. The team had a solid 2018-19 season, competed at USA Rugby’s College 7s National Championship, and then graduated an experienced, talented class. The team knew it was going to have to rebuild and felt those growing pains during an 0-4 fall 2019.

And then Covid-19 arrived and shut down rugby. Fortunately, 6-7 players remained dedicated and active during a year-and-a-half of pandemic restrictions, and saved the team from an even deeper rebuild.

“Our school and union restrictions meant that we weren’t able to practice with equipment for the majority of that time,” Humphrey said. “That small core of players was practicing in masks – fitness sessions, sprinting – which wasn’t very enjoyable for our Californian players who come from sea level.”

When the student body returned for the fall 2021 season, the team took advantage of every recruitment opportunity.

“I was holding my breath to see if we’d have 15 players, and we started with 35-40,” said Humphrey, who noted that natural attrition has whittled down those numbers. “All credit goes to that core group that made workouts and kept the rugby spirit alive. When the season came, they hit the ground hungry to play and travel and have all those experiences that makes college rugby so special.”

But Humphrey wasn’t necessarily surprised by the numbers either.

“Boulder as a city had tight restrictions about how many people could socialize together,” the coach said. “College is such a social time and I suspected that people would come back – even those who only played a semester and then took a break – just because everyone has been isolated the last year-and-a-half and would want that social experience.”

In addition to getting decent numbers, the Buffaloes have also been fortunate to inherit rugby players. There’s solid high school rugby in the state, so while there are young elements to the team, freshmen continue to arrive with high-level experience. 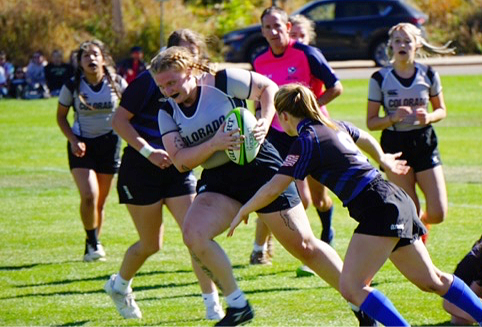 When it was time to start weaving the team together, Humphrey was actually absent while quarantining, and assistant coach Tracy Gola got the whole squad moving in the right direction. Colorado was also lucky to have three – rather that the tradition two – captains lending support.

“[Allison] Kammerer has been through all the waves,” Humphrey said of the senior flyhalf. “When she was a freshman, we had a ton of success at nationals. Then she went through the wave of graduating that class and not having a ton of success in the rebuilding phase. She was integral in keeping the team together for workouts and staying motivated, whether that was Zoom calls and just talking and hanging out. She kept the team cohesiveness there.”

Junior Emma Andreasen was one of those high school players who experienced success prior to attending Colorado.

“She eats, breathes, lives rugby,” Humphrey said of the No. 8. “She has a twin sister who plays, and they can get a little competitive. They both brought fire and passion to the team, and have kept that going.”

Kori Fay is the third captain as well as the team’s social media director.

“She started as a freshman but wasn’t sure if rugby was the sport for her,” Humphrey said. “She had been away during Covid and came back with a fire. She wanted to be around her teammates and make us as successful as possible. She wasn’t someone I anticipated stepping up in to a leadership role but she’s been bringing along new players. She plays prop and has been teaching them about the grind and force it takes to play that position, and to get excited for that.”

The Rocky Mountain teams remained in contact with each other, and all but Utah Valley was able to field a 15s team for the season. No league game has been canceled due to numbers, although there have been postponements for Covid.

“In terms of the league, it was a leveling of the playing field, because everyone had player turnover and graduated experience. We were all in the same boat,” Humphrey said “For us, it was an opportunity to re-establish the culture we had a few years back.”

“Generally, Air Force has been atop the league for a long time, and we’re gutting it out for the second-place playoff spot,” the coach said. “The game against Colorado State was a turning point for me. How would we respond when a team scored on us and kept it close?” 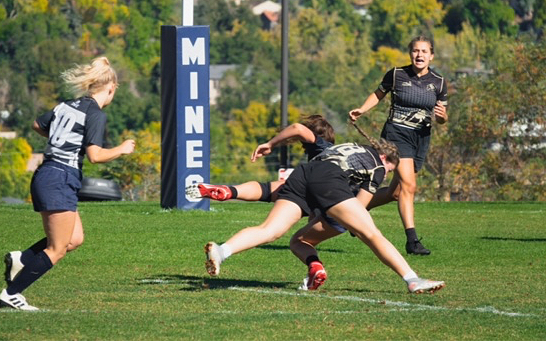 Colorado scored first through Kammerer, and Colorado State evened up by the 20-minute mark. Inside center Meghan Tualamalii – who has been an excellent finisher for the Buffaloes – scored tries on either side of halftime, and Kammerer added a conversion for a 17-5 lead. Flanker Carly Wood put CU up 22-5 with 10 minutes remaining, and then CSU closed with a try for the 22-10 final.

“I watched our team defend our tryline and they had the mental wherewithal to make it,” Humphrey praised the performance. “Sometimes you can only take so many punches in your 22 before you give up the try. They were so casual and calm, and they did not allow themselves to get defeated. They trust in their attacking abilities and love setting each other up, which is huge, and that allows them to be calm when it comes time to defend.

“It’s interesting,” coach said of the team confidence. “In having three captains and why it was so hard to narrow down: This team has a quiet leadership presence. No one’s in your face the first minute of the game, ‘Who has the first hit?!’ It’s a quiet confidence. When they were freshmen, I was worried that that quiet was terror, but they’ve grown into it.”

“I was probably more anxious about the Air Force game. In my career, we beat Air Force maybe once in 7s pool play,” Humphrey said. “Again that’s the piece I noticed or was taken aback by: They don’t get intimidated. They look forward to their games and love putting in their wacky trick plays. They focus on that more instead of the fact that Air Force has won the last however many national championships. After the game, they admitted that they were a li
ttle slow and nervous in the first seven minutes. We dropped a kickoff, which is unlike us. So there were some nerves in their play, but not in their mentality or in the way they practiced leading up to the game, or the way they talked about it.”

Kammerer and scrumhalf Sasha Weil scored in the first quarter before Air Force put down its try at minute 25. Colorado responded with another try from the flyhalf, who also converted Fay’s try: 22-5 into the break.

“We dominated possession, and that chipped away at the nerves,” Humphrey said. “And again, as good as this team is playing defense and defending the try line, they absolutely enjoy offense and controlling the game that way. We stole lineouts and scrums, and they realized: We can control this game even if they score on us. We have enough weapons to counter that punch. Generally, we never really dominated in our forwards and always played through our backs. But now we have a more balanced attack, and they shifted their play once they realized we could steal set pieces.”

Fay, hooker Tamara Islas Morales and Sky Wilson added second-half tries for the 37-5 win. Humphrey called out locks Anne Ward and in particular Nichol Civitello, who have been stellar in every game this fall. Against Air Force, Civitello was the example of hard work and did an excellent job of covering the breakdown against a poach-adept Air Force.

“They’ve moved away from: We’re just going to out-athlete teams,” Humphrey said of the win’s impact. “Yesterday [Tuesday] in practice, they’re all talking about strategy. We have Wyoming coming up and they traditionally have big, powerful girls who dominate time of possession and punch at you non-stop to control the game that way. They realized that our forwards have been pretty successful thus far but maybe they wouldn’t have the same kind of success against a team like Wyoming. I love the chess match of 15s and to see that build in them. ‘Could we run our loose forwards in this way? Or have forwards filling into the back line and getting involved in that way and keeping the ball in these channels?’ It was a big shift. ‘We want to beat them at rugby.’”

The team also started considering the details of playoffs. A few weeks ago, the team talked about what the post-season looks like in terms of commitment and travel. Goals emerged: Win the conference and advance to the Round of 16. As mentioned, Colorado has Wyoming this weekend, and then conference semifinals (Oct. 30) and championship (Nov. 6) follow. The DI Rocky Mountain conference will funnel into the College Rugby Association of America (CRAA) regional playoffs, while the DII teams will join the ACRA post-season (read more).

“It’s just been exciting to get back to real rugby matches,” Humphrey reflected on the season. “No matter the wins or losses, it’s really great to get through a season – knock on wood – thus far. After one-and-a-half years without even practicing a contact sport, I’m pleased how well the fall’s going.”