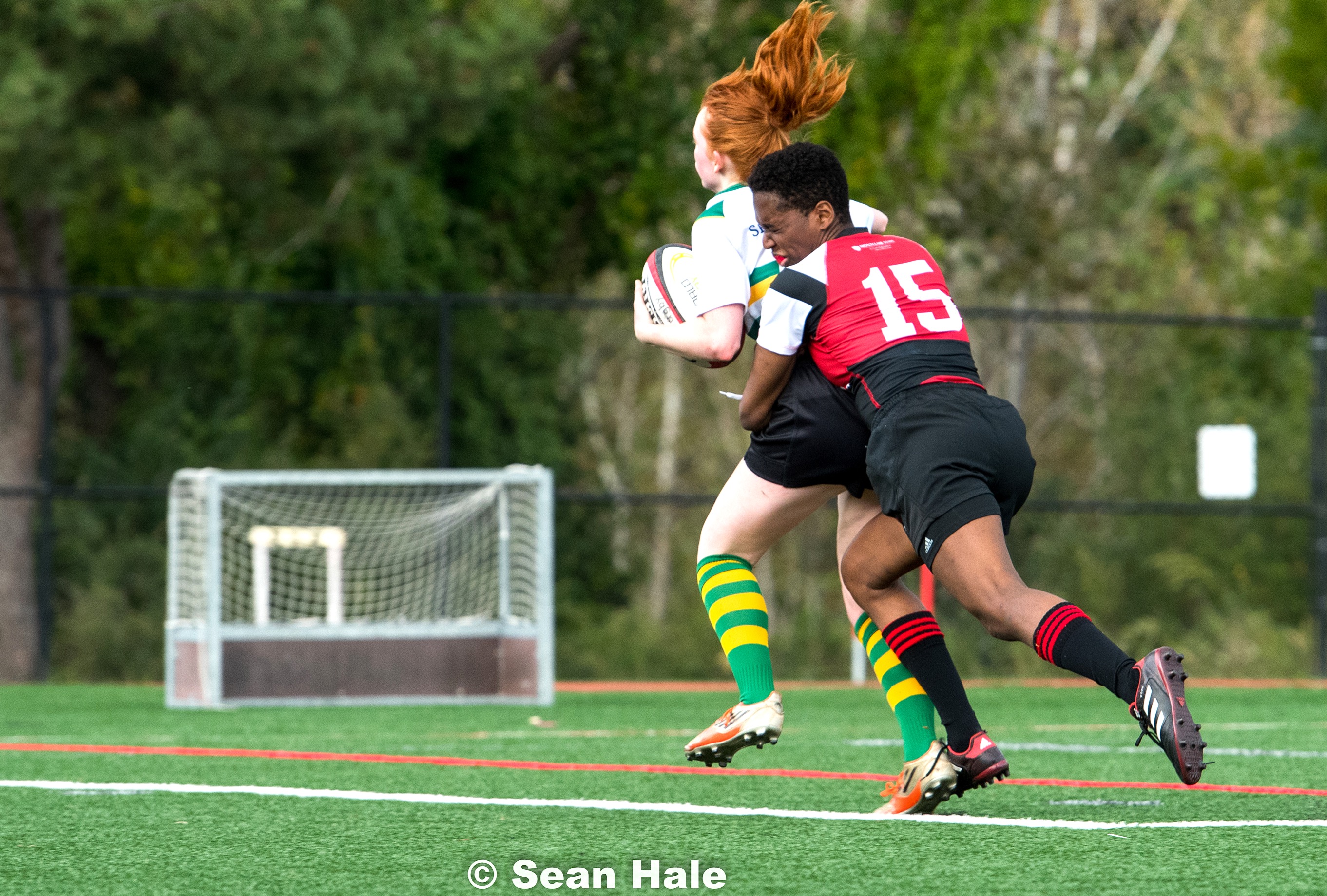 DI Dartmouth (6-0) and Harvard (5-1) have guaranteed their places in the Nov. 13 semifinals. Army (4-1-1) will advance, too, but Saturday’s game against Harvard could impact the teams’ seeds into the post-season. The real spot for contention is between Brown and Quinnipiac. In order for the Bobcats to advance, they need to beat Mount St. Mary’s with a bonus point this weekend and hope Brown loses its final two games without bonus points. Check out the standings.

There are three teams eligible for the DII playoffs, so the second and third-seeded teams will contest a play-in to the final against the top-ranked team. AIC lost 34-12 to West Chester and 36-5 to Queens. The Royals head to the Golden Rams this Saturday to settle the top seed.

The DIII semifinals are set. On Nov. 13, undefeated Bowdoin will host Colby-Sawyer, and Univ. New England will host Norwich. When these teams met during the regular season, the Polar Bears triumphed 79-0, and the Nor’easters won a 19-15 nailbiter.

DI Big 10 has conference games through Nov. 6 and final placing will be decided by standings. But Davenport has already locked up the title, going 5-0 with just one more game after its bye weekend (which will be spent at Penn State). The final two weeks are important, as Iowa (3-2), Notre Dame (2-2-1), Indiana (2-2) and Michigan (2-2) all have a shot at second place and potentially an at-large bid to playoffs.

DI Northeast will get into playoffs on Nov. 6. Northeastern is currently 3-0 with shutouts against UConn and UMass, and a 24-7 win against Boston Univ. Last weekend’s game against Boston College was canceled and so DI NCAA’s Quinnipiac University filled in.

Conferences like Blue Ridge, Capital and Carolinas have been active and/or contesting matrix matches, but they compete toward CRAA’s spring championships. And Texas has been playing 7s. The DI Midwest that used to be in this mix (Minnesota, Northern Iowa, Iowa State, Winona State, Wisconsin) now competes in NCR.

Conferences have until Nov. 7 to name their champions and runners-up, as the wild card round will take place Nov. 13. See the brackets. The Rocky Mountain teams and all of the conference champions automatically advance to the quarterfinals on Nov. 20, and the semifinals follow on Nov. 21. The location for regional playoffs has not yet been announced.

DII Tri-State is heading into its semifinals this weekend. RPI is traveling to Vassar, and Fairfield heads to Montclair State. The victors will book their spots in the ACRA post-season, but the Nov. 6 conference championship will determine who advances directly to the quarterfinals and who must go through the wild-card round.

DII Mid-Atlantic has seen a ton of forfeits due to low numbers and injuries, per MARC women’s commissioner Sam Hoegle. Temple and Kutztown look strongest right now. They played a friendly on Oct. 16, and the Owls won 24-17 on a last-minute try. If MARC holds its traditional semifinal / championship structure, then Delaware and Bloomsburg would be added to the final four. However, there’s a chance that a single championship match between Temple and Kutztown could occur, but that’s yet to be confirmed.

DII New England Wide semifinals were supposed to occur this weekend, but two forfeits mean there will be a single championship match between undefeated Coast Guard and Vermont, which are the first- and second-seeded teams in the standings anyhow. Vermont will travel to the Bears on Nov. 6.

DII Rugby Northeast has teams from different divisions and organizations under its purview, but with the restraints of Covid-19, all teams were encouraged to play each other just to get the games in. That made tracking standings a little difficult, but everyone’s following the same point system. All of that is to say that Stonehill College is looking strongest so far, with wins against UM Lowell, Providence and Southern Connecticut, and NCR’s Bryant this weekend. St. Michael’s may also be a good option.

“We’ll see how they seed with those points but realistically we need to talk to each team to see who can travel to playoffs and has the depth,” RNE commissioner Devin DiGiovanni said.

The Rocky Mountain conference is part of CRAA but its DII teams are competing in the ACRA championship because (1) they’re the only DII fall-based teams in CRAA and (2) it’s good for collaboration. Colorado Mesa University and Colorado School of Mines will contest a championship match on Nov. 13, and they’re both heading straight to the ACRA quarterfinals on Nov. 20-21.

NCR has released its Round of 16 brackets for DI and small college, so there’s some transparency on how teams will qualify and flow into the post-season. The organization did explain that there might be some movement once everyone has qualified and at-large bids handed out.

The DI Midwest has named its champion in Northern Iowa, and runner-up Iowa State has been approved for an at-large bid. The former will compete in Iowa Falls, while the latter will travel to Elkhart, Ind.

North Dakota secured the Northern Lights DI berth with a 39-19 win against North Dakota State, and is currently slated for Iowa Falls. Small college will be decided this weekend, as MSU Moorhead plays College of St. Scholastica in Ostego, Minn. Moorhead has looked very strong this fall, handling NDSU by much larger margins than
UND.

The Hummerz did not, however, beat Prairie States leader Univ. South Dakota, which won the Oct. 16 friendly 55-22. The small-college Yotes have beat South Dakota State a couple of times by comfortable margins, as well as Augustana, and tested itself early on against DI Iowa State.

DI Great Lakes will name its champion on standings points, and league games continue until Nov. 6. Grand Valley State has been crushing its competition, posting four shutouts and allowing one try against Saginaw Valley. But the season hasn’t been without its challenges. The Lakers played CRAA’s Davenport in early September and the loss provided insight into work-ons. Bowling Green has also been posting big scores against Michigan competition, and also added matches against Allegheny’s Youngstown State and Pitt, which BGSU beat 29-19 last weekend. On Nov. 6, Grand Valley and Bowling Green play each other in their last regular-season match.

Oshkosh, Wisc., is the host site for the Great Waters DI quarterfinals and semifinals, and small college final four. Large colleges will name their champion on Nov. 6.

Mid-America is Wayne State College’s new home, but it’s been a pretty anemic fall for the reigning small college national champions. The Wildcats traveled to Minnesota for a pre-season tournament, and have several forfeit wins against fellow league mates Central Missouri and Pittsburg State. The team was able to get a game against UW La Crosse during one of those cancelation weekends, and that was a 114-0 win. But Wayne State College has a lot of institutional experience in the playoffs, so if anyone’s going to be ready for the competitive shift, it’s the Wildcats.

Illinois is the only other question mark. Winona State president Kayla Dustin stepped in as commissioner this fall and did a great job of bringing some administrative support to the state. The majority of the league qualifies for the DI competition, and there has been movement with teams like Purdue and Illinois State, both of which have 15s numbers. More to come. Stay tuned.

Syracuse, N.Y., is the host site for the eastern regional playoffs. Allegheny will name its DI champion this Saturday, and it’s down to Kent State and Pitt, and Notre Dame College has grown in health this fall and applied for an at-large berth to the DI competition. The small colleges played 7s this fall, like the EPRU, and won’t be present in the 15s post-season. Rugby Northeast is naming reps on standings points, and as mentioned in the ACRA section, a part of that process will include individual conversations with teams and the reality of post-season. That said, 4-0 Roger Williams is the strongest of the small colleges, and Bentley wouldn’t be a bad option either. The teams played each other on Oct. 16 and Roger Williams won 19-5.

Colonial Coast is all small college and will hold its championship on Nov. 6. This conference has traditionally come down to Endicott and Salve Regina, and both are undefeated in league. However, Endicott has only played three league games, while Plymouth State completed its full schedule with a 4-2 record, putting the team in second place. Endicott needs to beat, ideally with a bonus point, UMass Dartmouth this weekend to finish in the top two.

Upstate New York is holding small college semifinals this weekend, and the champion will be determined Nov. 6. Rochester (West #1) hosts Ithaca (East #2) on Saturday, and St. Bonaventure (West #2) travels to Cortland (East #1). Syracuse and Colgate are deciding the DI automatic berth to playoffs this weekend. The victors will compete in Syracuse for the regional playoffs Nov. 13-14.

The southern location for regionals is in Danville, Va., and South Atlantic and Ohio Valley, as well as at-large bids, are meant to report there. Ohio Valley uses a point system to name champions, and the University of Cincinnati has secured the DI berth to regionals. Baldwin Wallace hasn’t locked up the small college automatic berth yet but the Yellow Jackets are certainly the team to beat. In its first 15s season, Baldwin Wallace has outscored league opponents 210-17, and has Grace College – also an NCR ranked team – and Kenyon before the regular season ends.

The South Atlantic (SARC) is holding championship finals for small college and DI. This weekend, the Virginia Military Institute is traveling to Lee University in Tennessee for the small college title. On Nov. 6, the Univ. South Carolina and Clemson are battling for the top DI spot. Life’s NCR team has also applied for an at-large berth to the DI competition.