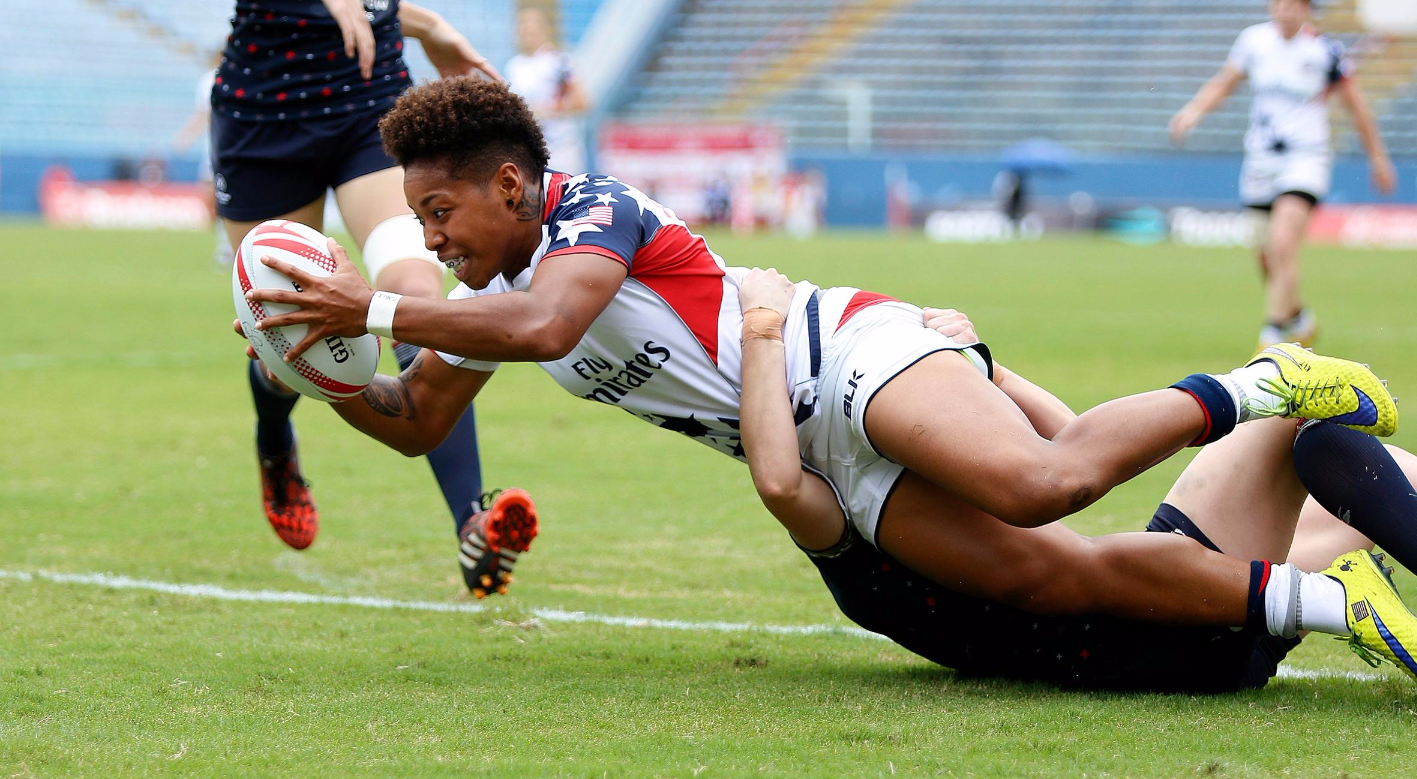 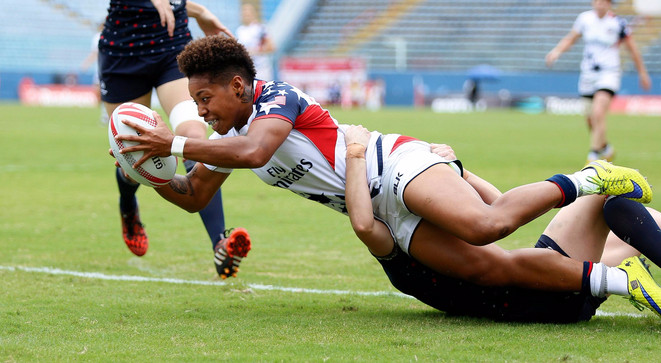 Baravilala has been an influential playmaker all day. /// Photo: World Rugby / KLC fotos

The USA Women’s 7s team, for the second time in its history, have defeated New Zealand 12-5 in the final pool play round of the Atlanta 7s. The Eagles end day one 3-0 and atop its pool and will continue the tournament in tomorrow’s Cup quarterfinals.

The teams traded turnovers in the opening minute, but the latter, New Zealand’s, was the more crucial of the two. Deep in the USA’s end, wing Kristen Thomas picked up a loose ball and it moved to Bui Baravilala. The flyhalf’s angled run split defenders, and as they collapsed, she sent a wrap-around pass to Alev Kelter in space. The scrumhalf outran her pursuer 80 meters for the try, 5-0.

A break in play occurred when New Zealand playmaker Kelly Brazier came off of the pitch, having taken a knock in a double-tackle. When play resumed, the Kiwis launched into action, stringing together a fast, weaving series of passes that involved the entire squad. The final pass out of the tackle made it to Selica Winiata for the try, 5-5.

Kelter did well to bring down the restart, and wing Thomas once again found space off the weak side of the ruck. Ball then moved to Baravilala, who drew the defense and sent a finishing pass to Jill Potter on the wing. Had that pass not gone forward, then the captain would have been away for a try. New Zealand answered with a scoring threat of its own. A nicely placed kick-through found a receiver on the sideline, but a good cover defense was there to contain.

Both sides were tough in and around contact. New Zealand, led by captain Sarah Goss and Ruby Tui, did well poaching the ball in the tackle. The USA had tightened up the fringe, and both Lauren Doyle and Potter found themselves disrupting the passing lanes.

And then some of the turnovers occurred in the wide open. The most memorable happened when Baravilala at sweeper subdued a two-on-one with a big tackle that caused a knock-on. New Zealand missed out on another opportunity for big yardage when an on-rushing Potter pressured a finishing pass on the wing into a knock-on.

A long Doyle breakaway, which was set up by a well timed pass from Baravilala, got the game back in New Zealand’s end. The teams traded possession between knock-ons, steals and penalties – but play stayed on the Kiwis’ side of the pitch. The Americans earned a penalty that Meya Bizer kicked to the 22. The ball moved to wing Jessica Javelet, who had nowhere to go but kept looking for opportunity. She cut back against the defense, saw a half-gap and exploded through it for the try. Nicole Heavirland added the conversion for the 12-5 lead with 1:30 remaining.

The death knell came in the form of Bizer. As New Zealand looked to set up that last breakaway, a ballcarrier idled too long in the open field. Bizer snapped into the tackle forcing a knock-on. The USA scrum came together with no time on the clock, and Richelle Stephens kicked the ball to touch for the second-ever win against the New Zealand 7s team.

It was a fine, gritty win for a team playing in front of its home crowd, and a good foundation off which to build when looking toward Saturday’s knockouts.