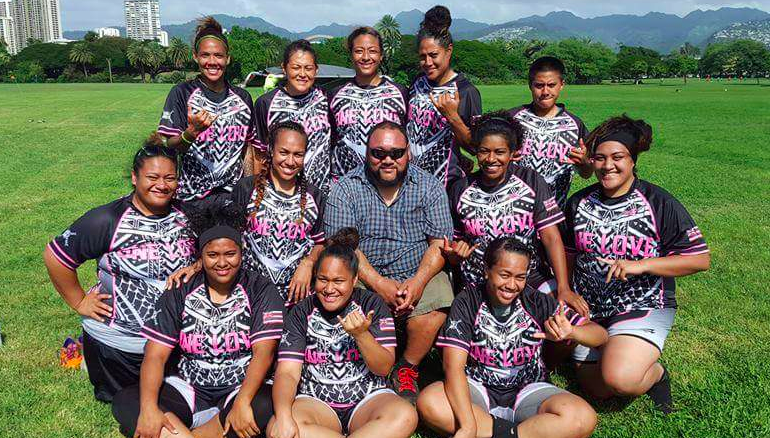 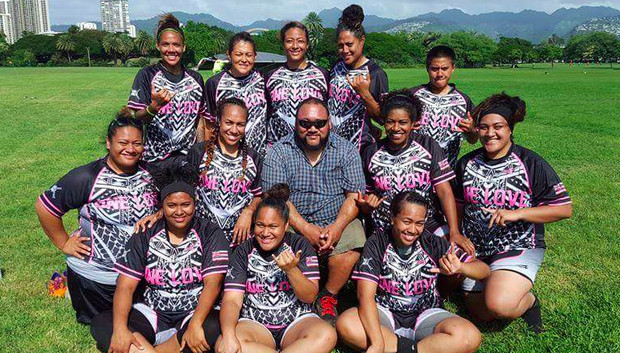 Sefesi Green (center) with the Lady Raiders during a recent 7s tournament.

“The Lady Raiders are truly honored to have both Sefesi Green and Sam Robinson on the coaching staff for this season. Both coaches bring a wealth of knowledge and passion for the game of rugby that is bound to inspire and motivate the women in our club,” said Lady Raiders Club President Tatti Sevelo.

Green is currently in his last season as head coach of the Sacramento Amazons. The program includes both high school and senior women teams. During his 15-year tenure with the Amazons, his high school team won the National Championship in 2003 and 2010, finished in the top three at nationals seven times, and earned nine Northern California titles. He also led the senior women’s team to the Division II National Championship in 2014 and 2015 and finished as runner-up in both appearances.

In addition to his experience with the Amazons, Green was the head coach of the Northern California High School All Stars from 2012-2014. While in this position, Green guided his team to a tournament victory win every year.

Green’s success on the pitch opened up an opportunity to work with USA Rugby where he continues to serve as scout for the Girls High School All Americans.

Green is looking forward to expanding rugby in the islands of Hawaii.

“I’m excited to work with the Kalihi Lady Raiders. We both wish to grow girls and women’s rugby here in Hawaii,” Green said.

Sam Robinson shares the same vision for women’s rugby in Hawaii. He has seen the talent in Hawaii and wants to be a part of the effort to develop rugby in the islands.

Many of the athletes that Robinson has coached have been selected for the USA National Team including Katie Johnson, Ashley Perry, Garrett Bender and Nate Augspurger.

“Green and Robinson are a good combination and their unique skill sets will help to take the Lady Raiders to the next level of rugby. We are very blessed to have both coaches on board. The ladies are eager to learn and looking forward to this season,” Sevelo said.

To kick off his inaugural year as head coach of the Lady Raiders, Green will be hosting a free rugby clinic on Saturday, January 23, from 9 a.m.-12 noon at Kapiolani Park. The clinic is open to females from the age of 16 and up.

If you would like more information about the Kalihi Lady Raiders Rugby Club or the clinic, send an e-mail to ladyraiders808@gmail.com or visit www.facebook.com/ladyraidersrugby.com.