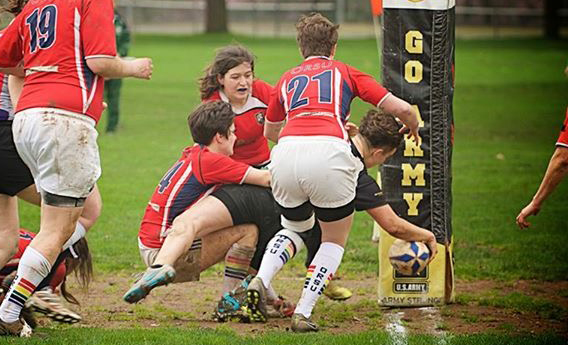 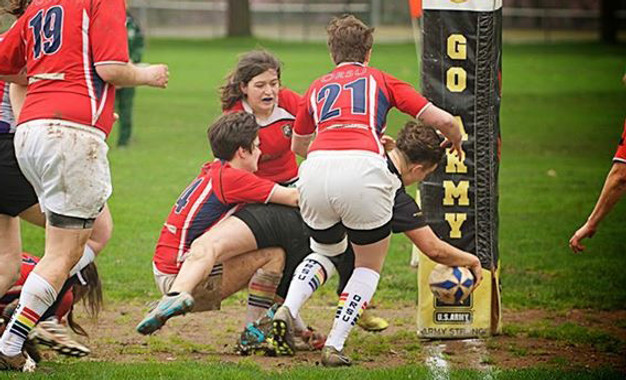 Aunnica O’Brien dives over for a try.

Emerald City restarted its campaign for a Pacific Northwest title, shutting out ORSU’s DII side 30-0 Saturday. The Mudhens are now 5-0 with three league games remaining.

The first quarter was evenly contested, with much of play contained near midfield. Mudhens flyhalf Aunnica O’Brien slotted a penalty from the 22, and then added a converted try. A second try gave Emerald City a 13-0 lead at the break.

“We were very strong on defense yesterday, but initially our blitz defense – we were getting called off sides quite a bit, coming up too quickly,” Emerald City coach John Wooler said. “So we had to make an adjustment there. We were not being too aggressive on attack either, so at halftime, we talked about really pushing the ball wide to space and go that route.”

The team embraced the changes, and wing Abigail Bishop sprinted into space for two tries in the second half. O’Brien continued to lead by example and accounted for 20 points on the day.

“She was very determined yesterday,” Wooler said of the co-captain. “She had a mentally strong game and that inspired her team. But it’s tough to pick any one player [who stood out]; they’re all pretty consistent now. I’d say that 20 of these players are legitimate starters, and really it’s about strategic subbing now than anything else. That’s one of the strongest things we have now; we really do have a very strong squad that I can utilize throughout the game.”

Having that depth allowed Emerald City to keep the tempo high, but ORSU kept pushing and did well to expose some areas in need of improvement during the spring opener.

“We’ve improved our defense but were weaker in the open-field tackles,” Wooler assessed. “We’ve worked on three basic defensive strategies to really tighten up that defense, to cut down the space of the attacking player and work together to getting up quickly. There’s always strong players out there who will make a break, etc., but collectively as a team we’re better defensively.”

Emerald City is a favorite for the league title, but Wooler stressed that the team is treating each week’s opponent with the same respect.

“This week’s mantra, coming back into playing mode, was: Same strategy, same team, same results,” Wooler said. “Our weakest performance last year was against the lowest-ranked team in the league. We won, but we didn’t play well. So we have to set our own standard, improve each game, and that’s the measurement we’ll go by.”

Although Wooler isn’t looking past any opponent, he is optimistic about the squad’s chances this year.

“They’re very similar to the UCLA team I coached in 2010, when we were ranked sixth in the nation and broke all the UCLA records,” Wooler said. “Every few years you get to a coach a team where it all comes together, the right players at the right time with the right strategy. I think this team could go very far in the playoffs, and it’s my job to make sure that happens.”

Emerald City will play Chuckanut Bay, Tacoma and Boise on the road before playoffs. Playoffs begin at the end of April in Bend, Ore.


The Love/Hate With the LVI