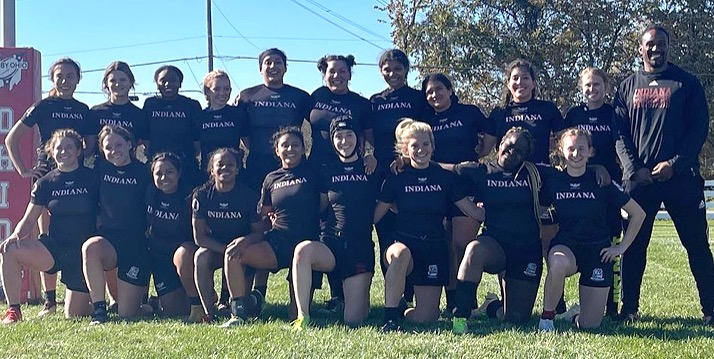 The College Rugby Association of America (CRAA) is fielding a full Round of 8 for its DI fall post-season. Teams from Big 10, Rocky Mountain and Northeast conferences are participating, as is independent Navy. Indiana University was the last team to be named, taking an at-large berth to the eastern portion of regionals in Annapolis, Md.

Vaughn Mitchell is the long-time coach at Indiana and he indicated that there wasn’t much organized activity during the pandemic shutdown. Players got together in small groups and worked together when they could.

“Numbers have been low unfortunately,” Mitchell said of the fall roster. “There were 25 girls at the first practice and I knew maybe 4-5.”

With that said, Mitchell explained that it’s not uncommon for newcomers to join with high school rugby experience.

“We have a young team but there are some good athletes in that group,” the coach said. “And a lot of them have played in high school. That’s pretty standard. Of the 25 we have now, I’d say 19 have high school experience. Rugby in Indianapolis has been exploding the last couple of years.”

With that said, a year of inactivity means there are two classes of newcomers who need education on the pace, physicality and extended match time of the collegiate game. Fitness and body prep were the focus for the first few weeks.

Setting the example is president and team captain, Zoe Goldenberg, who leads from scrumhalf and also kicks for points. Goldenberg is the pivot between a young forward pack and more experienced back line.

“All of our forwards are underclassmen except for one senior lock,” Mitchell explained. “All of our experience is in the back line and that does shape our game a little bit. We don’t focus on forwards or backs so much, but try to play an open game as best we can. Plus, a lot of our forwards were backs in high school. Even my starting loosehead prop was a scrumhalf in high school. Usually we have size in our pack, but we’re so small this year and that’s why we’re trying to play an open game.”

Breanna Steiff is the mark of experience in the pack, and the second row is aided by breakout performers Shaianne Mcgruder, the No. 8, and freshmen flankers Olivia Venditti and Ella Kibbe. Gaby Malave and Arie O’Brien are difference-makers in the backs, and fullback Anna Hensel has been playing well after rehabbing a knee injury.

“The biggest thing is, all of our losses were close,” said Mitchell, whose team lost three games by a combined 18 points. “Even Davenport, we played them tough in the second game of the season. They were blowing out teams by 50, 100 points, and we were tied with them at half. We were tied at the 70th minute even. That’s when it was, ‘OK, you’re actually pretty good.’”

The losses to Notre Dame and Michigan both occurred in the rain, and Indiana’s speed was nullified.

“That really hurt us,” Mitchell said. “Please don’t let it rain [this weekend]! We don’t need a forward-dominated game. We need to use our ball skills the best we can and play in open space.”

Mitchell indicated that taking the at-large berth to regionals was a last-minute decision – namely because they didn’t know whether their record was good enough for a post-season spot. The team wanted to give their seniors one more run after such a long hiatus, and it knows the experience will shape the newcomers’ expectations for the future.

“Everyone’s really happy,” Mitchell said of the team vibe right now. “They’re really excited to just play another game and the fact that season’s not over yet. This is a fun road trip; we’ve never been to Annapolis before.”

Indiana also hasn’t played Northeastern University in recent history and will face the Northeast conference champions in Saturday’s quarterfinals. The victor will then play the winner of Navy and UCONN on Sunday, and then the DI fall final will be held on Dec. 4 in Mathews, N.C.


Shindledecker: We’re Not 1 and Done