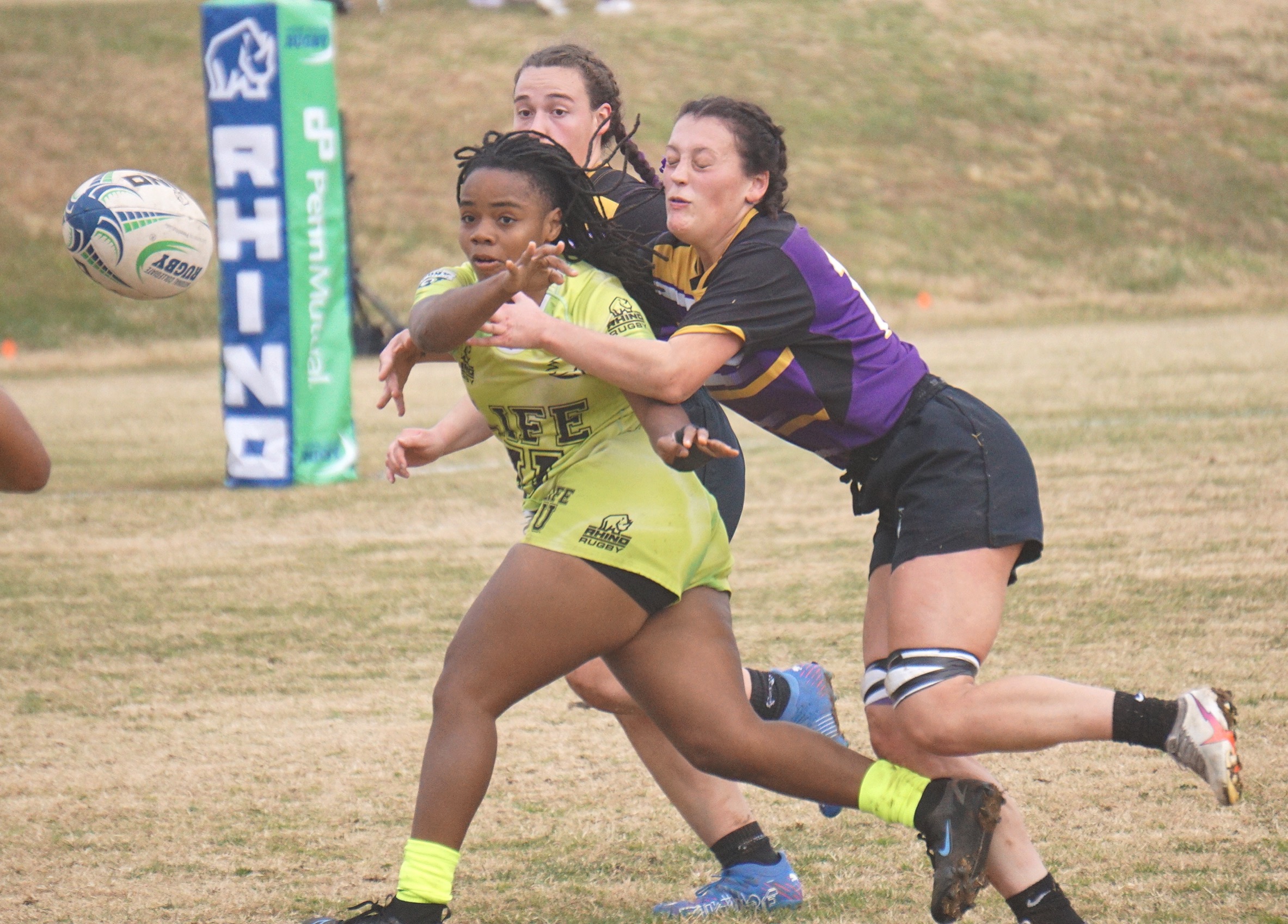 National Collegiate Rugby (NCR) held its first Division I competition, which culminated with a 15s national championship weekend in Knoxville, Tenn. Live University JV and Univ. Northern Iowa won their respective semifinals on Saturday, and then the Running Eagles defeated the Panthers 87-3 Sunday to claim the national title.

Life defeated Marquette 103-0 in the semifinals, while UNI battled Notre Dame College to a 35-29 victory. Panthers captain Maggie Burns said that that comeback victory brought new confidence, and that’s how UNI played from the opening whistle. Freshman Emma Bacon quick-tapped from a penalty and tore into Life’s end, eventually setting up a shot at goal that just fell short.

That did put the ball in Life’s hands and the Running Eagles used the next few minutes to get in range for a Brooklyn Vaifanua try – the sophomore inside center’s first of three scores in the final. Freshman flyhalf Nina Mason, who was named championship MVP, kicked the first of eight conversions: 7-0. 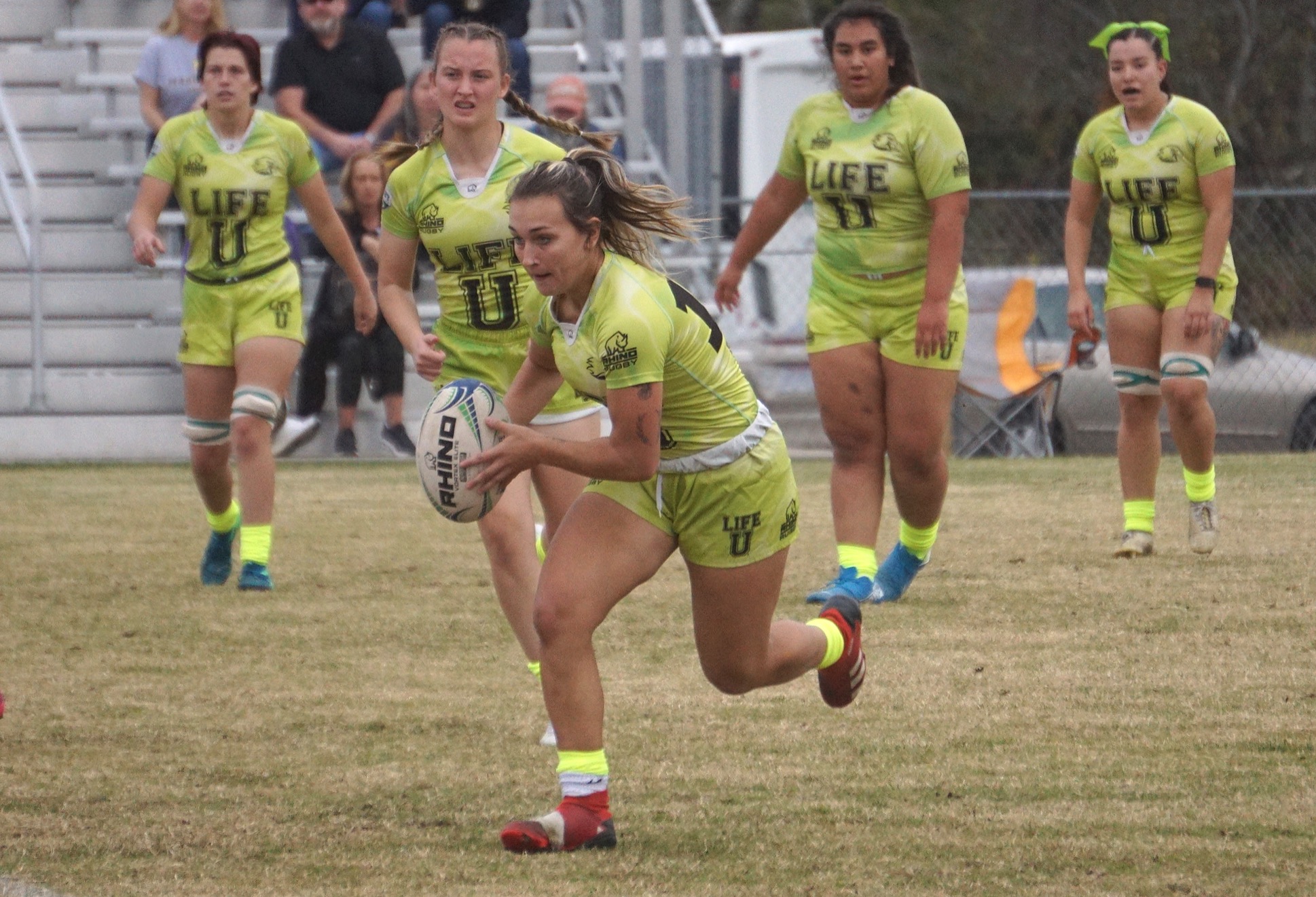 It wasn’t long, however, before UNI was back in Life’s end attacking again, and when another penalty occurred in front of the posts, Bacon nailed the kick for three: 7-3 to Life.

“Our goal throughout the tournament was to not get scored on, but they did get a penalty,” Mason said. “We watched [UNI] in their game yesterday. It was a tough game against Notre Dame [College], but we knew if we played like we did on Saturday, we’d be fine. But they played really well and put a lot of heart into it.”

UNI ended up playing a lot of defense and players like lock Jessi Inman, hooker Isabelle Thomasee and fullback Ciara Stanerson-Edwards led in the way of tireless tackling and work rate. There was some confusion and/or handling errors when UNI transited to offense quickly, and Life made good use of those mistakes. 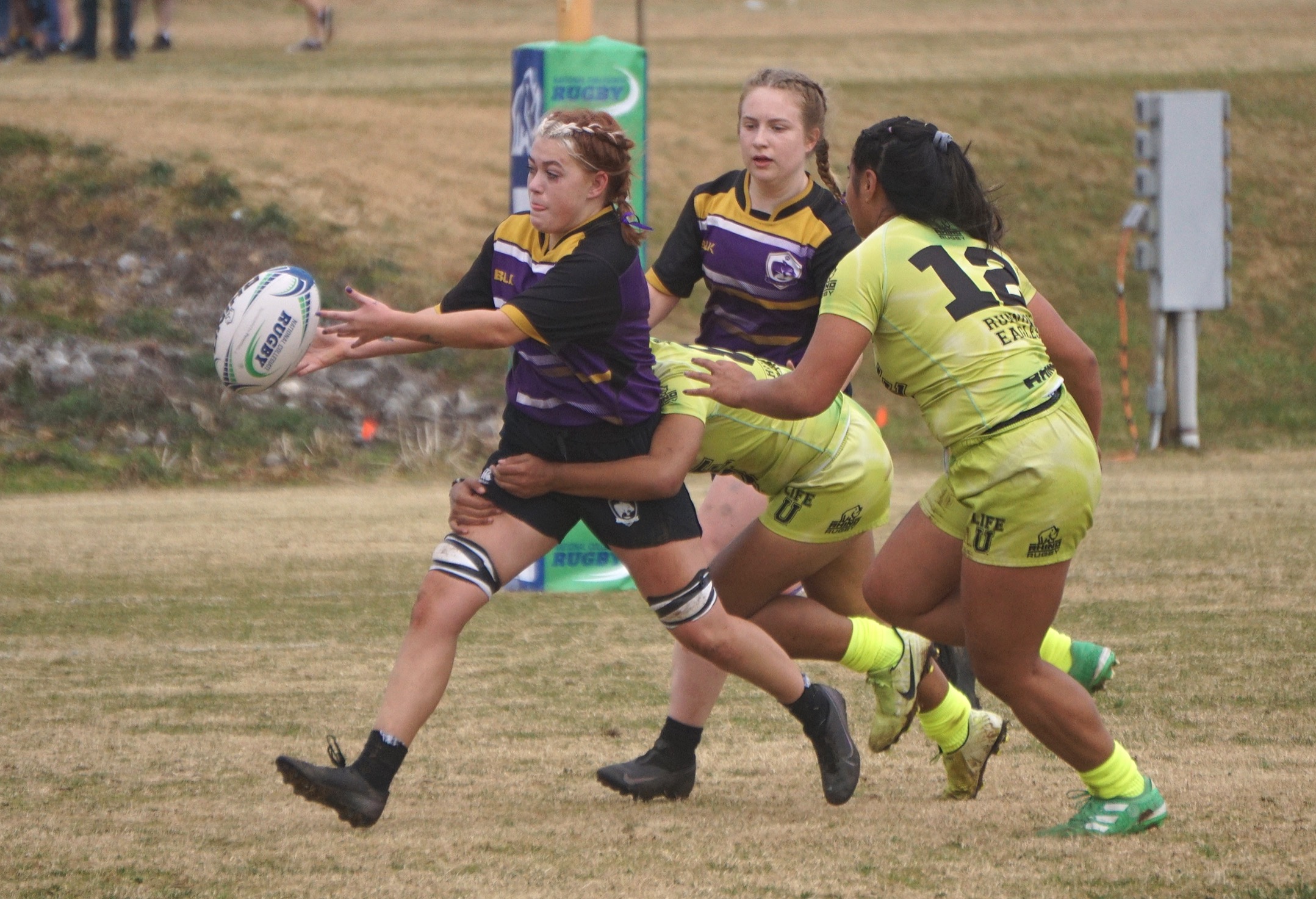 In the second 20 minutes of the first half, Life put down six tries. Ballcarriers like Nickky Nguyen, Reece Sakamoto-Wolfgramm and Tynesa Taulua charged hard into and off of contact. Flanker Abigail Bachman scored two tries from close range, and lock Sakamoto-Wolfgramm ended the half with a try.

Mason deployed a really fast, nifty back line that operated at top speed. The flyhalf took a couple of nice looping lines that sliced through the defense, and the freshman scored a couple of tries in the second half. Fullback Destiny Roberts and wing Sarah Barsoum were great finishers on the day as well. 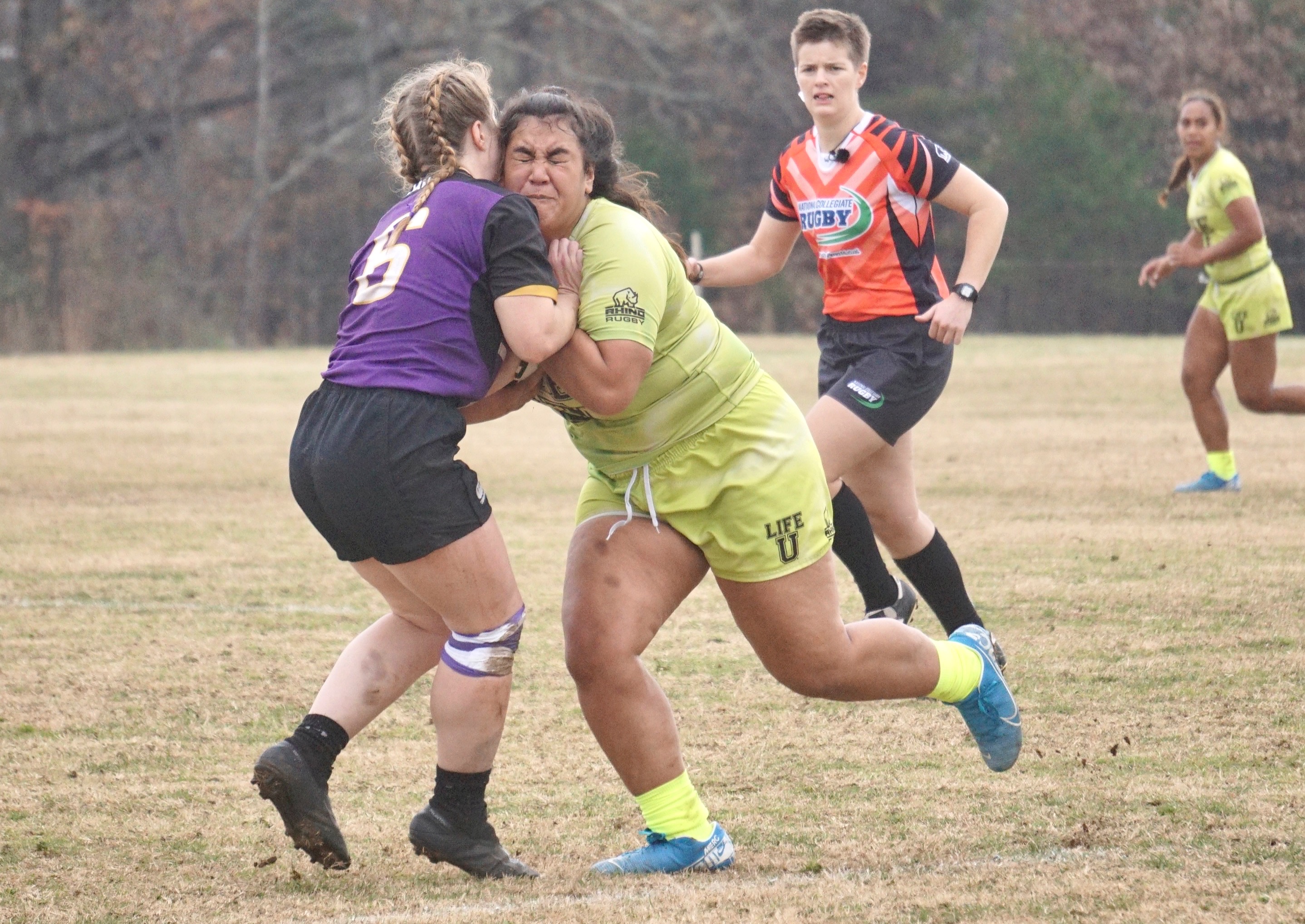 “In the beginning of the season, I wasn’t as confident, but everyone kept telling me that I could tell them what to do and they wouldn’t get mad at me,” Mason said of commanding the backs as a freshman. “I gradually learned to deal with that, and as I got used to the structure, I got more assertive and got control of things.”

Life held a 45-3 lead at halftime and added five tries from Mason (2), Roberts (2) and Vaifanua. Mason also kicked two penalties and another three conversions in the 87-3 win.

“Dez Roberts and [outside center] Amaya Moala in the back line, they thrive in this stuff,” Mason called out teammates. “Amelia [Noa] is a truck and she just started playing so she’s just getting into it. She’s learning and doing really well and we’re really proud of her.” 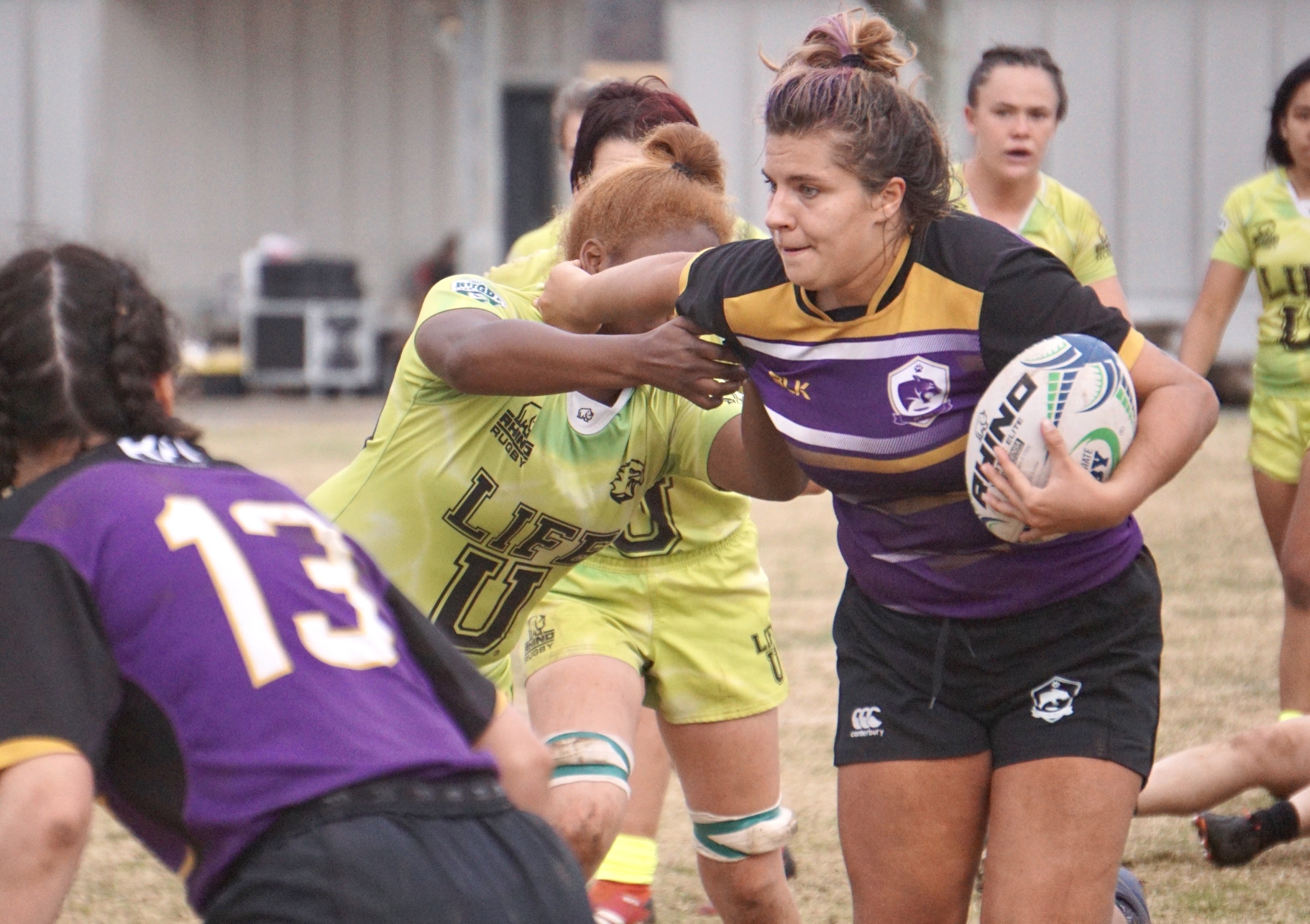 NCR also names Heart & Soul Awards – a player from each team that is emotionally supportive and inspirational. UNI prop Kayla Dustin (who is also an NCR intern and filled in as Illinois conference commissioner this year) and Life prop Amelia Noa, who played her first game of rugby at NCR regionals a few weeks ago and lit up the sidelines every time she touched the ball.