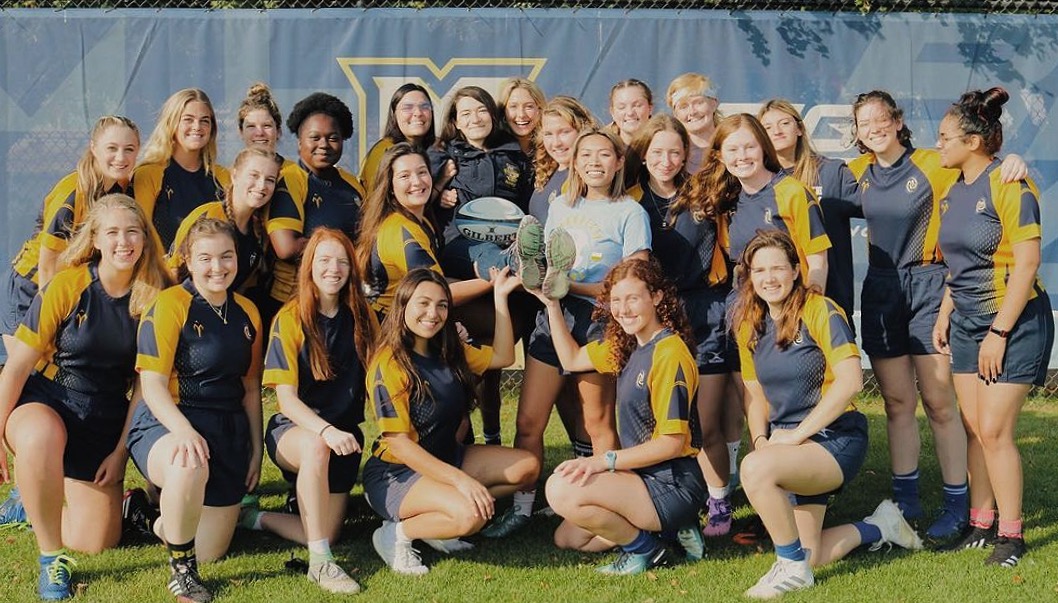 The Great Waters conference will be well represented at the National Collegiate Rugby (NCR) 15s championships this weekend, as Northern Michigan (small college) and Marquette University (DI) travel to Knoxville, Tenn., this weekend. It’s a big step for the Milwaukee program, which has been making a push for regionals the last few years. Marquette is eager to play good competition this weekend and to also realize the benefits of national exposure.

Covid-19 prevented any real activity during the 2020-21 school year, and there was concern about numbers as the fall 2021 season approached. But the veterans were pleased by recruitment numbers, and a squad that normally hovers around 20 players has held steady at 30 this season. Marquette is also fortunate to have 8-10 returners with good rugby experience.

“When we came into the fall, we were focusing on fun and thought this would be a rebuilding year for us,” said Marquette president Kayla McQuestion, who played rugby at Catholic Memorial High School. “But before our first game, we were already transitioning to a how-far-can-we-go [mindset], just because of our numbers. We started talking about the season and what we’d do for starting positions, because we had a lot of starters already.” 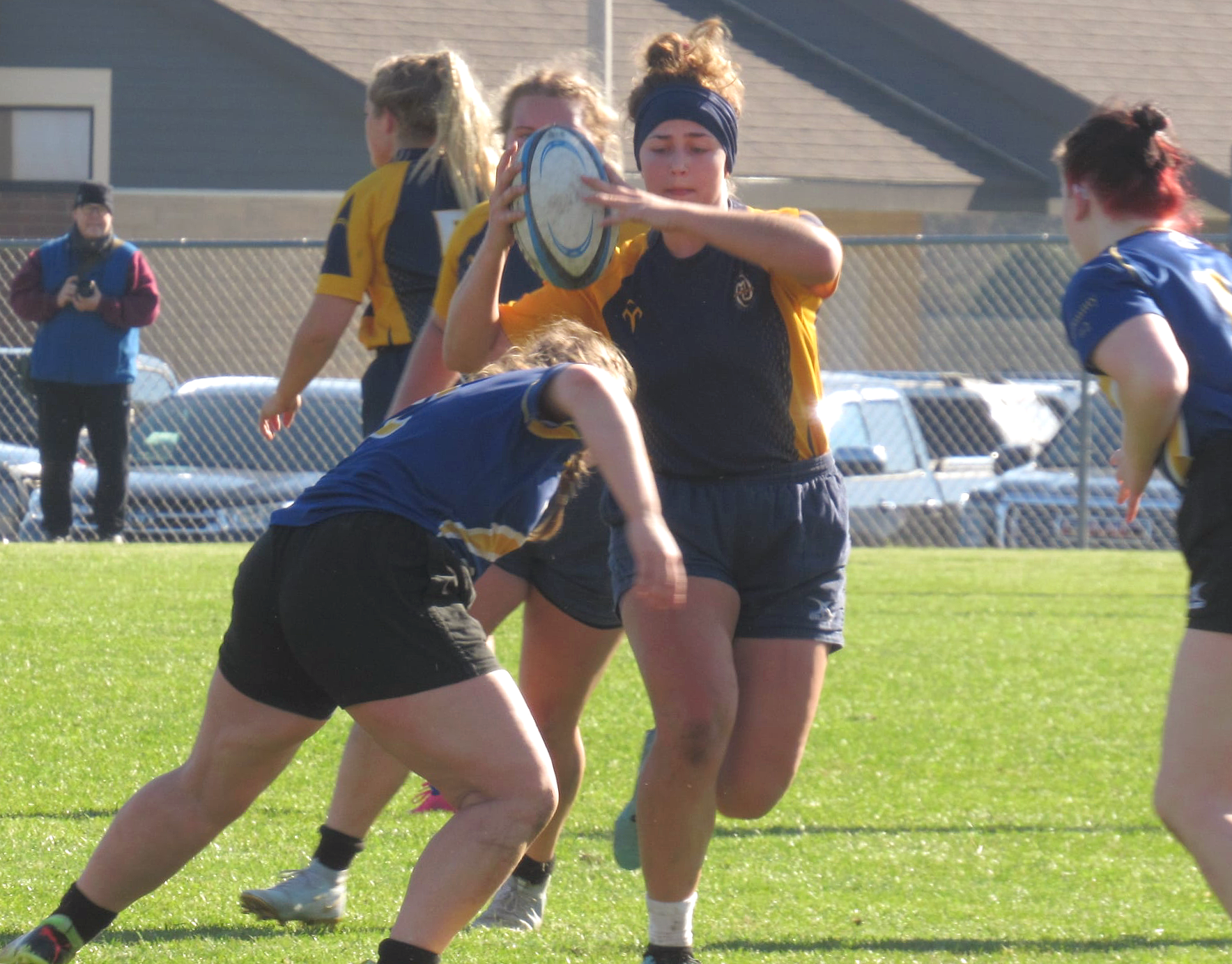 For Marquette captain and flyhalf Angela Andrews, post-season visions started to appear after a couple of league games.

“Our first game against La Crosse was a hard-fought game, then the next week against Whitewater we were pretty dominant. That’s when I started thinking about post-season and future plans for the program,” Andrews said. “We’ve been a historically strong team, but that’s when I thought, ‘Oh we’re a strong team and we can do something special.’”

Marquette beat UW La Crosse 68-32, UW Whitewater 85-0, UW Oshkosh 98-0 and UW Platteville 45-0, and took the No. 1 seed into the Great Waters DI quarterfinals. Whitewater was the intended opponent on Oct. 30 but forfeited its match. That set up a Sunday semifinal against Loyola, which had defeated Univ. Illinois Chicago 19-12 the previous day.

“We wanted to focus on our game plan and following through with it,” said Marquette head coach and alumna Aoife Hanley, also a DSHA product. “Sometimes we can get excited and a little crazy with our play, and things get messy. We wanted to make sure that we knew our plans for the game and didn’t play to the other team.”

A disciplined game followed and Marquette won 95-0 to advance to the Nov. 6 Great Waters DI championship against UW Eau Claire.

“In the past, it’s always been Oshkosh that beats us [in the conference semifinals], and it was heart-wrenching for us. So to just make it to that last game was amazing,” Hanley said. “But the down side of blowouts is that when you get to the higher levels, you might not be accustomed to being down and fighting back to win. You can get an ego. … We were just excited to play against another top team in the division but there were some nerves and that added to it being such a close game.” 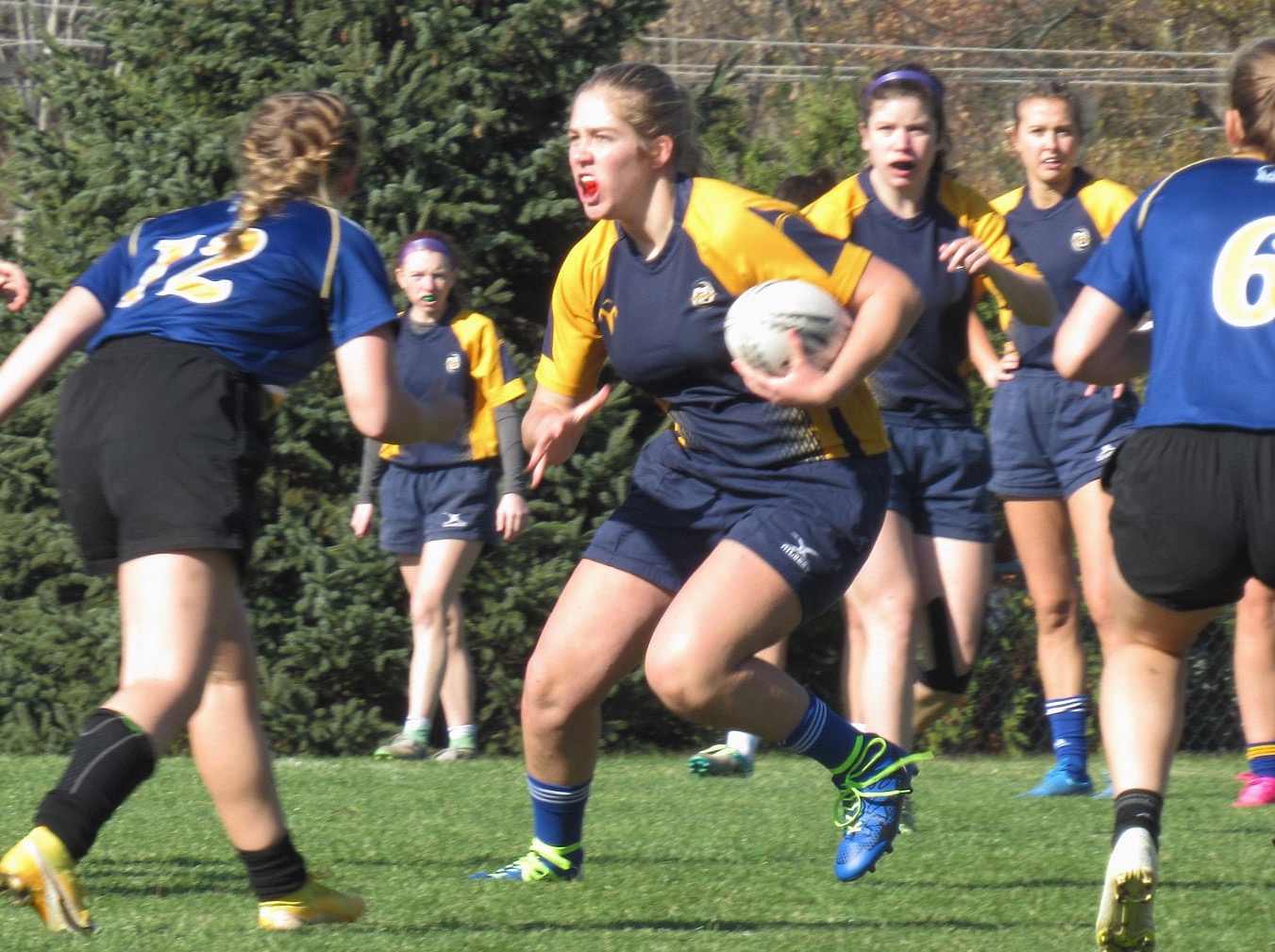 The first 20 minutes of the final evolved without a score, and then Marquette kicked off a try-trading match. Marquette never lost the lead but the win was never certain in the 17-10 victory.

“During that game you really saw us come out fighting hard and able to maintain that fitness through the end of game,” flanker McQuestion said. “Everyone had a really positive spirit and was cheering each other on to help us stay motivated until the last whistle. It took a lot of heart.”

“Our team was a lot of juniors and seniors who had experienced those losses to Oshkosh in previous years, so we all knew it was an honor to be in that game,” Andrews added.

And with that win came the Great Waters championship and two weeks later the NCR regional playoffs. As McQuestion crossed into unknown territory that is post-season paperwork and fundraising, the president described an overall vibe of excitement with the team. Everyone just wanted to play more rugby against even better competition. Marquette traveled to Elkhart, Ind., for the Nov. 13-14 double-header and lined up against Midwest runner-up Iowa State in the Round of 16.

“Given that we stayed in the lead for a lot of our games, it was always easier to have a positive attitude,” McQuestion said. “Against Iowa State, they were ahead 21-7 at halftime. It was cold, and we were really fighting and trying to keep a positive mentality. When we did get scored on, we’d come together. ‘What did we do and how can we fix it?’ There was no blame place. We wanted to come together as a team and show that we could persevere.”

“The first try we made in the second half, that revved us up,” Hanley said of a turning point. “Then it was, ‘We can bring this back really easily, so let’s keep going and making tries,’ and we did. It was such a team effort. There isn’t one person who drove us over.” 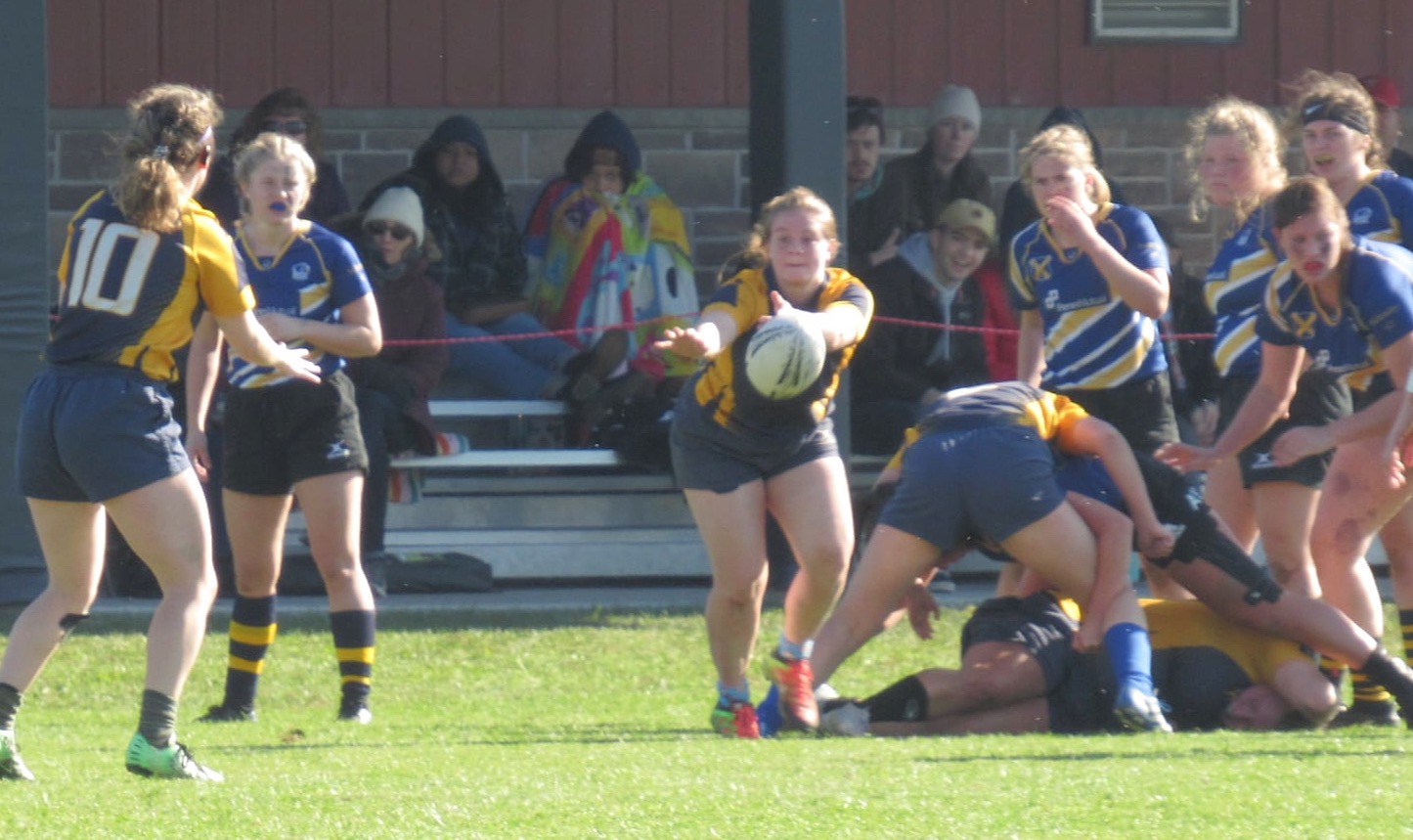 Marquette fought back from the first-half deficit to beat Iowa State 29-26. The team then readied for Great Lakes champion Grand Valley State University in Sunday’s quarterfinals.

“We came in with a serious amount of focus for Grand Valley,” McQuestion said. “They had beaten teams 125-0 during the regular season, so we were more prepared for that game than Iowa State. But we definitely had more of an underdog mentality.”

Marquette reviewed its film from Saturday and focused on its work-ons, and committed to more intensity for Sunday. A 41-12 victory evolved and Marquette’s season continues on.

The trio asserted that everyone had played a role in getting the team to Knoxville, Tenn., this weekend, but there are a few key contributors who inspire the squad.

“Our 9, Evelyn [Mitchell], played in high school and she’s a big leader on the field,” McQuestion said of the scrumhalf. “Her rugby IQ is so high and she does a good job of giving input at practice. We lean on her experience to know what we need to work on.

“Hayley Weeder, our 12, does a really good job working with [flyhalf] Angela in the back line,” the president continued. “There’s a good relationship there and she’s come into her own this year.”

“A big player for our forward pack – other than Kayla – is Ryley Rand,” Andrews said of the lock. “She can play any position we need her to, and is a good person to communicate between the forwards and backs. She gets be
tter every practice, and it’s so awesome to watch her develop.” 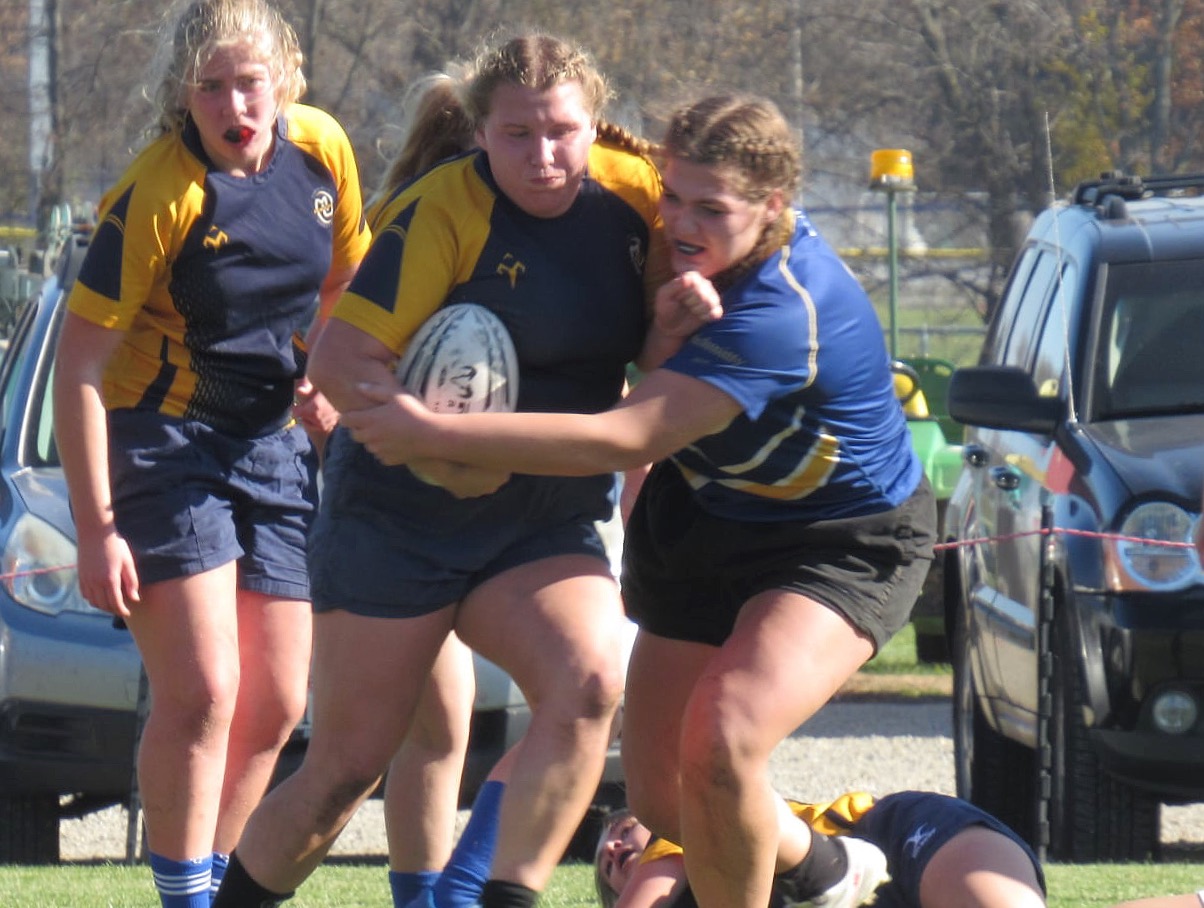 Since qualifying for nationals, the leadership team has been gathering film on fellow semifinalists Life University, Notre Dame college and Notre Dame to prepare as much as possible.

“We’re super excited to bring our all this weekend and have a great time, but we’re also hoping other girls, whether in high school or transferring from other universities, see that we’re not just a talented team but that we care about one another,” McQuestion said. “Hopefully people see that and it can add to our roster in the future.”

“Life and Notre Dame are such incredible rugby programs and to have our name just be in there with the final four, just like Kayla said, that draws a lot of attention,” Andrews talked significance of this weekend. “We’re getting better and we have a lot to offer.”

“When I first started playing at Marquette everyone told me that it was a social club and to not expect much,” Hanley added. “I played very competitive rugby in high school, and this team was not competitive at first. We’ve grown to be so strong. I can see us being such a strong, competitive team, unlike the first year I started.”


Vassar’s Back on the Title Hunt