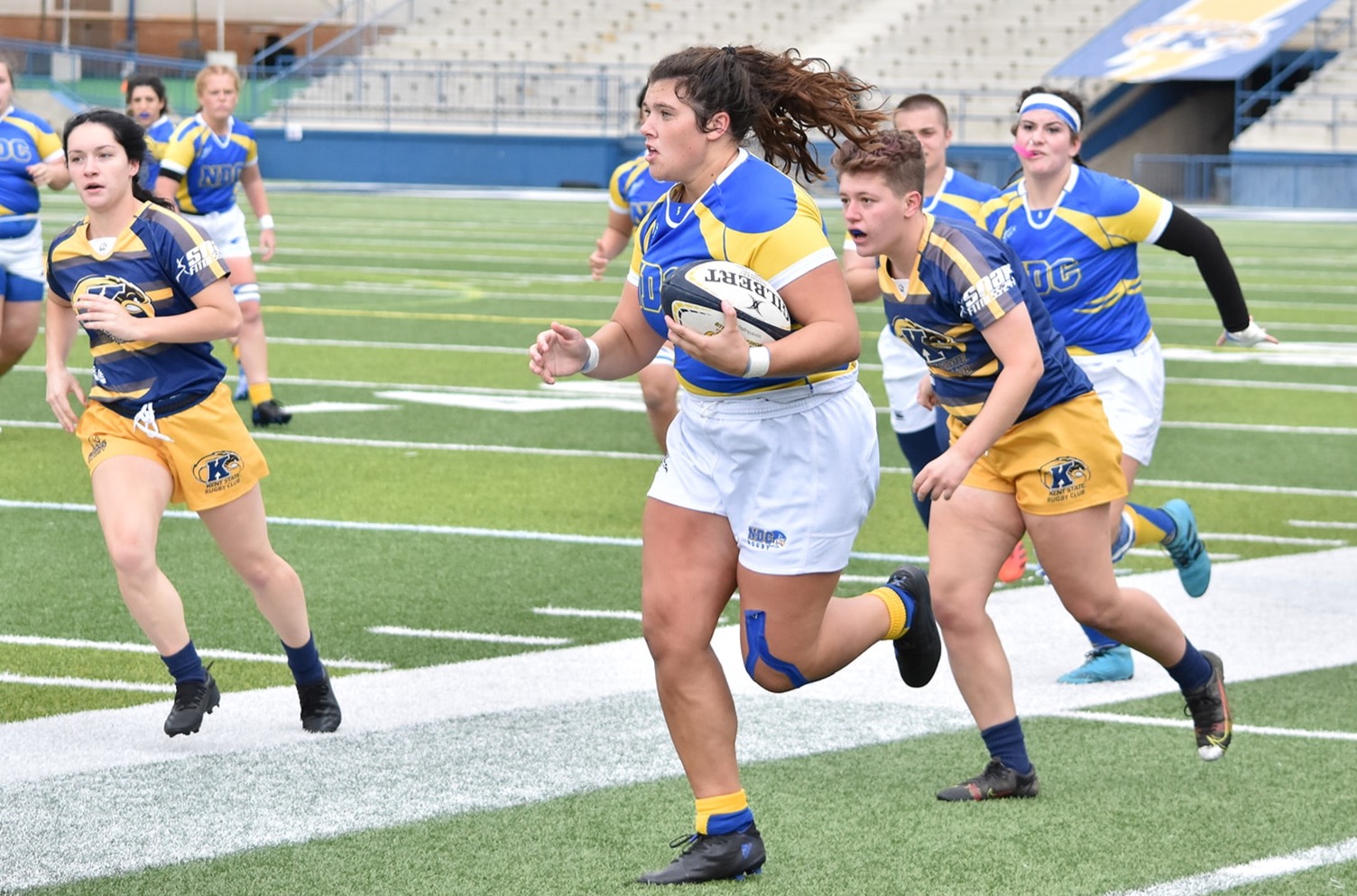 Notre Dame College was in a rough spot as the 2021-22 school year approached. As the program looked to fill the head coaching vacancy, recruitment suffered and amplified the stalling effects of Covid-19. The Falcons withdrew from the National Intercollegiate Rugby Association, and while there’s hope to rejoin the NCAA varsity league at some point, the program is focusing on rebuilding in National Collegiate Rugby (NCR). The team is heading to the NCR DI regional playoffs this weekend, so that visibility and momentum for which the Falcons are hoping might arrive sooner than anticipated.

In August 2021, Notre Dame College hired 25-year-old Jack Nece as head coach and aligned with NCR’s Allegheny conference. Approximately a dozen players were expected for the fall season, so the plan was to play 7s in the fall, culture some stability and attract big recruitment classes the next two years. But then once some normalcy returned to the college level, some former players re-enrolled in school and the club fair recruitment table drummed up enough interest that now made 7s an ill fit for the fall.

“We had optics on that early on so we did what we could to scramble and get some 15s games added to our schedule. I will say that the Allegheny conference was incredibly responsive to our plans, which was a lack of a plan,” Nece said. “Our season wasn’t supposed to be like this. We were supposed to get our reps in and build during this gap year.” 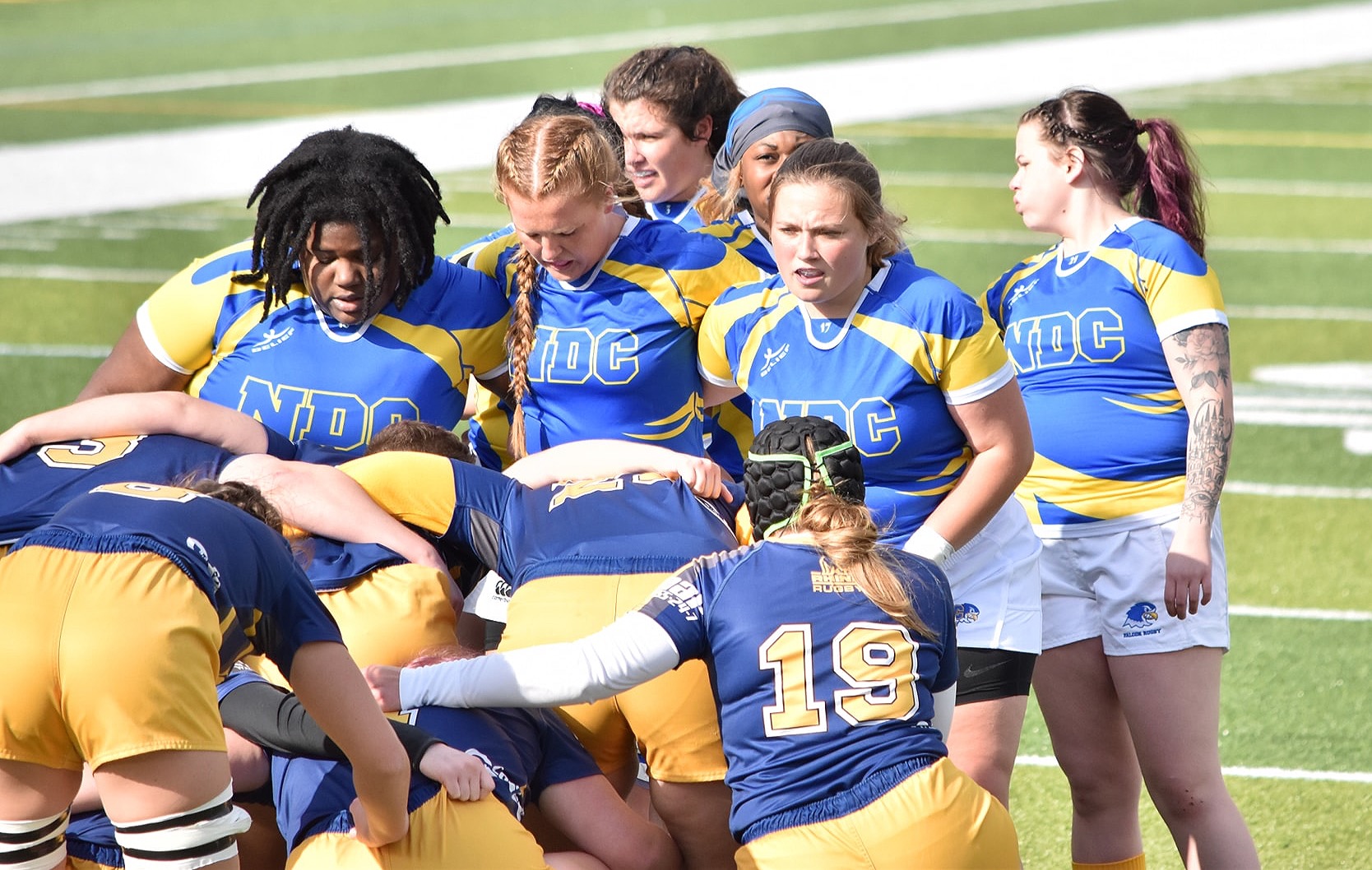 Nece is young and was playing in college not too long ago. His assistant coaches are also recent grads. Danielle Walko-Suia is a former Falcon and has played with some of the senior players, making the alumna a particularly good bridge between players and staff.

“There is a really solid class of seniors who have been incredibly helpful,” said Nece, who has a full-time job outside of coaching. “To be honest I leveraged their knowledge and experience a lot, and they’ve been very responsive to it.”

Senior Kelly Wallenhorst is the forwards captain and handles all of the social media marketing. She leads alongside senior flyhalf Avania Matteo, the backs captain, who is a major resource for Nece.

“I text her, ‘Can you do this?’ And it’s, ‘Yes, I’m on it.’ No questions asked,” Nece said. “She takes everything very seriously and has been pivotal in getting the girls bought in and working hard and doing more workouts – all that stuff. She’s a team leader in all aspects.”

The bonding process started during “hell week,” a pre-season ritual that involves two practices per day as well as film and lifting sessions in the morning. 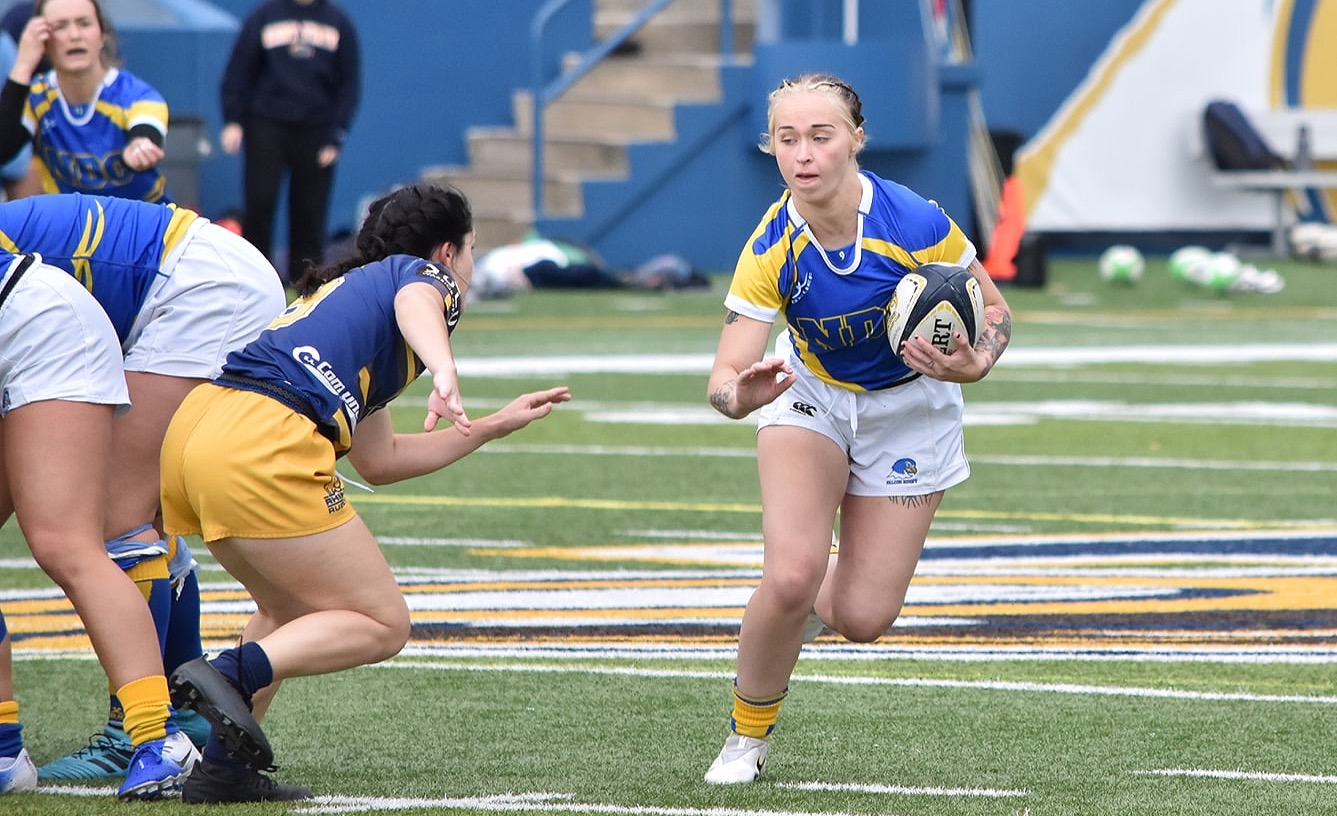 “It gets people into the mold of, ‘This is what you signed up for,’” Nece said. “That hadn’t happened the last two years and so there wasn’t that level of bonding that is necessary for the program. All the freshmen get to meet the upperclassmen, and everyone’s becoming friends because they’re spending so many hours each day together. The camaraderie that came out of that was important, and they’re a genuinely good, very coachable team to work with now.”

Notre Dame College played in two Allegheny conference 7s tournaments in Fairmont, W.Va., and Indiana, Pa. The Falcons went 5-1 across the two events, and played its closest games against Fairmont State (22-15 loss) and Indiana University of Pennsylvania (15-12 win). The team played its first 15s game on Oct. 3 and traveled to the University of Pittsburgh. The pack leaned on its size advantage and went to work in and around the breakdown – lots of picks-and-goes – and a 60-0 victory followed.

“When the chemistry is good, you’re learning each other’s playing style and how to support it,” Nece said. “And when you’re good friends off the field, then everyone picks each other up on the field. There are always multiple people supporting the try, and overall, everyone’s a good teammate.” 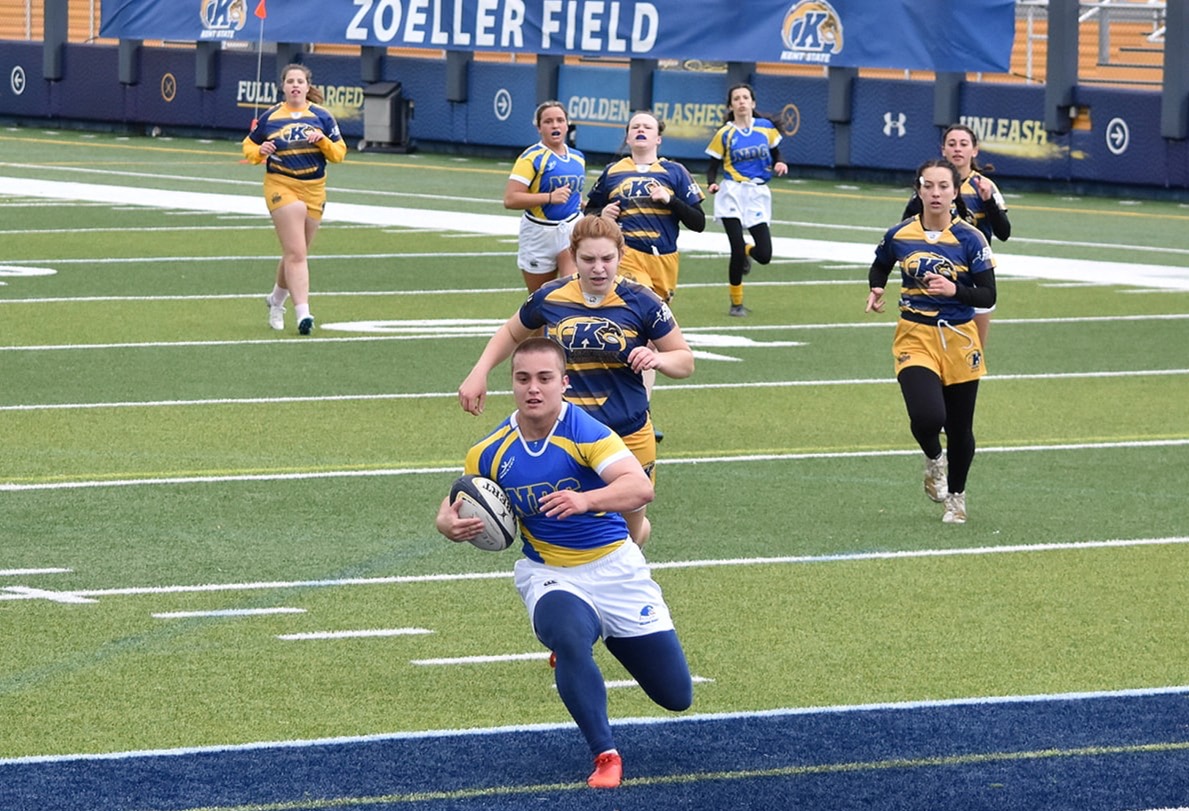 “The girls were incredibly nervous because they knew players on the other team,” Nece said. “Being a local school, they played high school and select side with the Kent State girls. Again, it was big points [79-5 win]. It was a big deal.”

Notre Dame College hadn’t played enough Allegheny conference teams to qualify for the league championship, and Kent State beat Pitt for the title and automatic berth to NCR regionals. But the Falcons received an at-large invitation to the DI Round of 16/8.

“The girls went ballistic,” Nece said. “Ever since then they’ve been more locked in at practice. They’re nailing down their reps and there’s an added level of intensity, too.”

Last weekend, Notre Dame College was able to add a home fixture against the University of Cincinnati, the Ohio Valley champion. The Falcons wanted to work on more strategy pieces, as regionals loom this weekend.

“They’re higher ranked us,” Nece said in advance of Saturday’s game. “We’re playing like it means something.”

The Falcons won 65-17, a nice vote of confidence heading into the post-season. 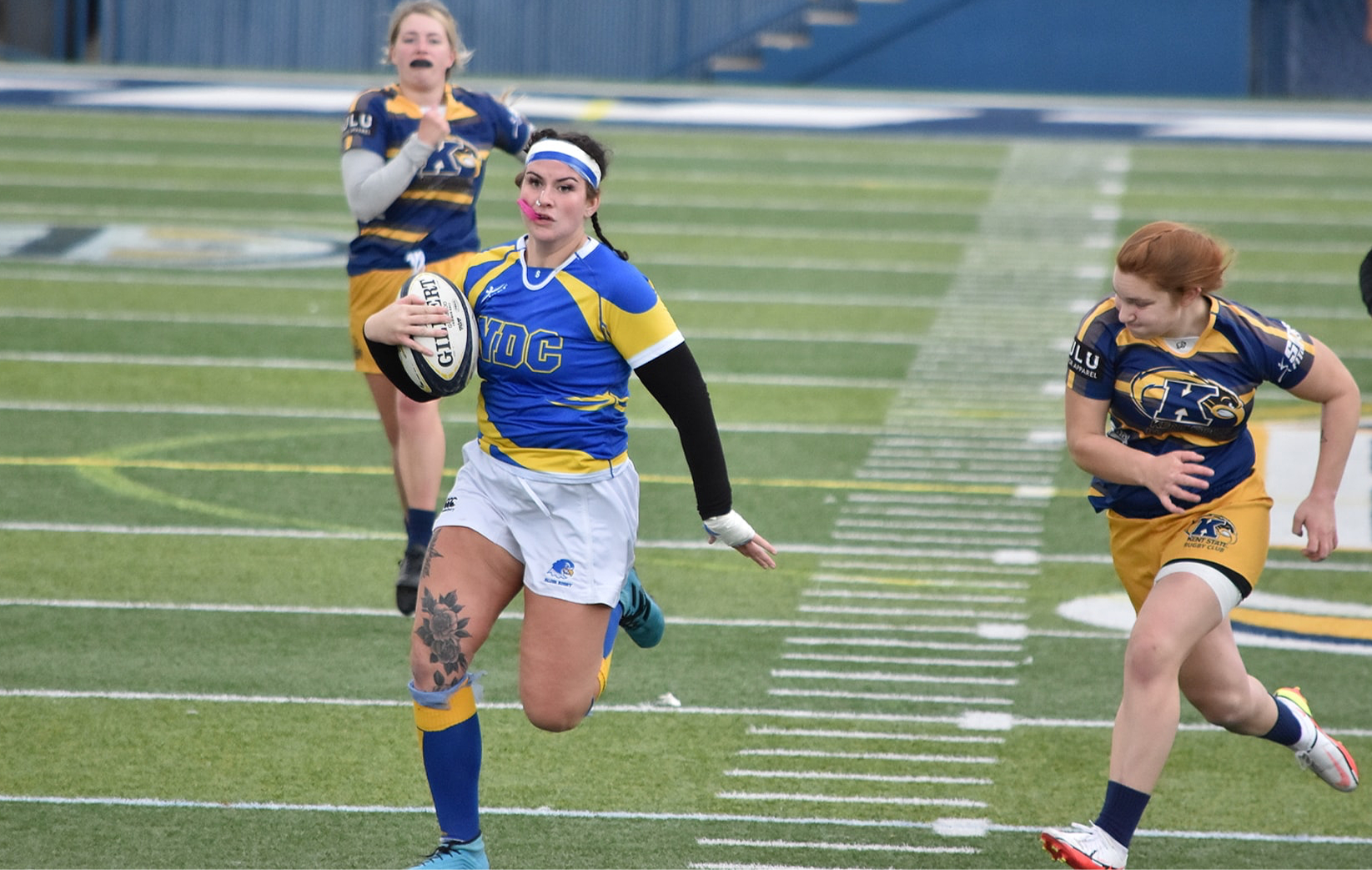 Everyone is working like there’s something to play for. Leading the charge alongside Matteo, junior Aubrey Boing has played scrumhalf and center this season. The Brunswick product injects a high level of rugby IQ to the pitch.

“She’s going to be someone who takes over the main leadership role next year, and she’s already recognizing that,” Nece said. “She has really stepped up the last couple of weeks, too.”

Raina Perciak is also a junior and has had a great fall season so far.

“She’s a monster on the pitch, to be honest,” Nece said. “She scores a lot of tries and is an absolute beast of a talent. We play her at any loose forward position. She loves to hit and the contact area. Just an insane athlete.”

The younger classes are pushing as well. Sophomore Alivia Leatherman had originally signed with Queens University of Charlotte but returned to Ohio to be closer to home. Nece also described the first-year in “monster” terms.

“I have a goals and expectations meeting with every player, and hers are focused on the national team level,” Nece said. “She’s putting in the time with the S&C coach and has truly bought in, and she’s made an immedi
ate impact on the program. She was selected to the USA U20 development camp in San Diego this winter, and she went ballistic. I said, ‘No, I told you, you’re that good.’” 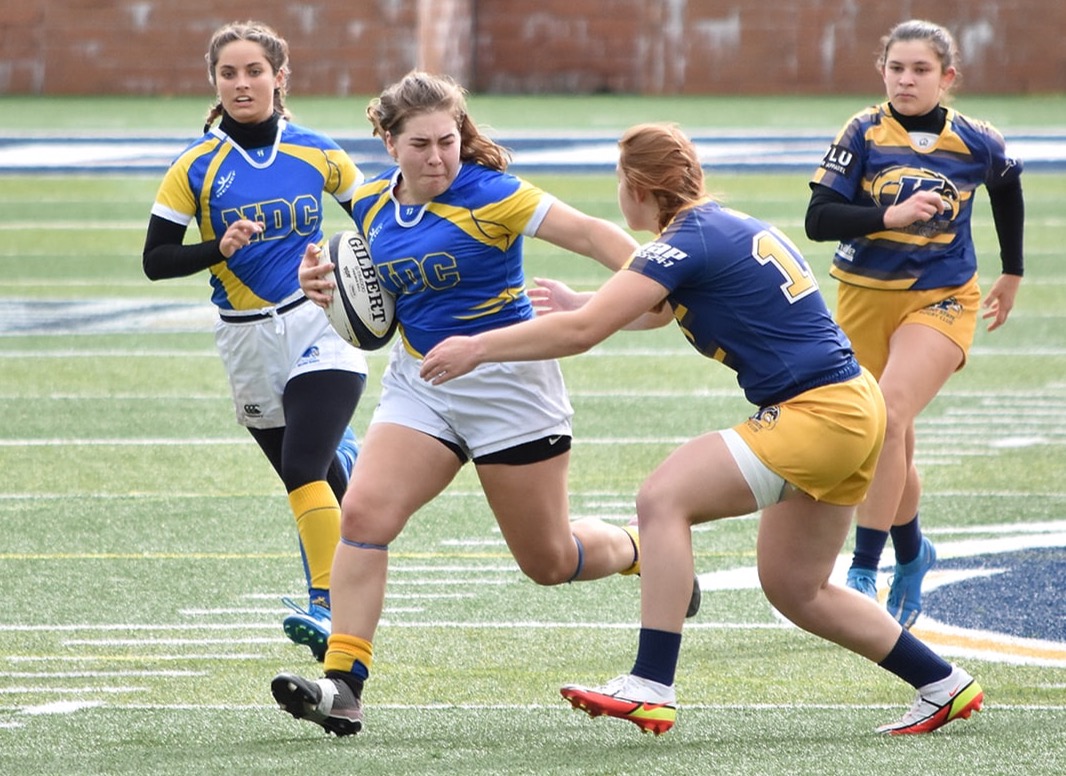 Sarah Valentine has stood out among the freshmen. She’s a utility player who started at outside center, grimaced at the move to hooker – and then loved it – and now moved back to the back line.

“She has so much pace for her size and is by far the most devoted to the gym,” Nece said. “My physio tells me that she’s squatting as much as the guys’ players. She comes from a military family and she brings this instinctual work ethic. Without all of these players, the program would not be where it is right now.”

Notre Dame College is heading to Syracuse, N.Y., for this weekend’s DI Round of 16/8, and will face Rugby Northeast’s Roger Williams University on Saturday. Depending on the outcome, the Falcons will play either Upstate New York champion Colgate University or Kent State on Sunday, Nov. 14. Should the Falcons win both matches, then the team will head to Knoxville, Tenn., for the national semifinals and final on Dec. 4-5.

The Falcons see the opportunity ahead of them, and know these higher-visibility appearances will build more buzz and notoriety for the program.

“It takes everyone,” Nece said. “Everyone is buying in at different levels and that is driving success now and for the future.” 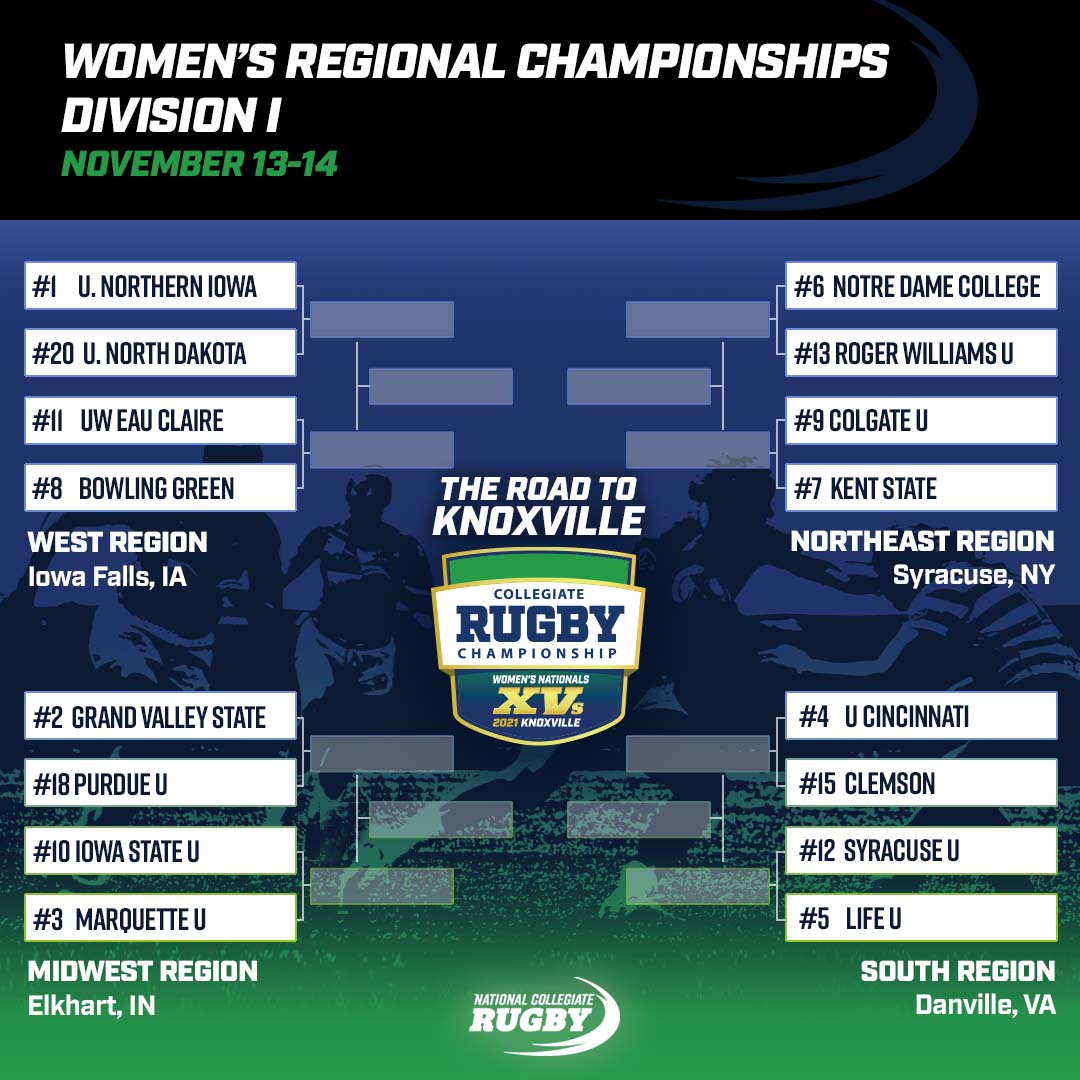