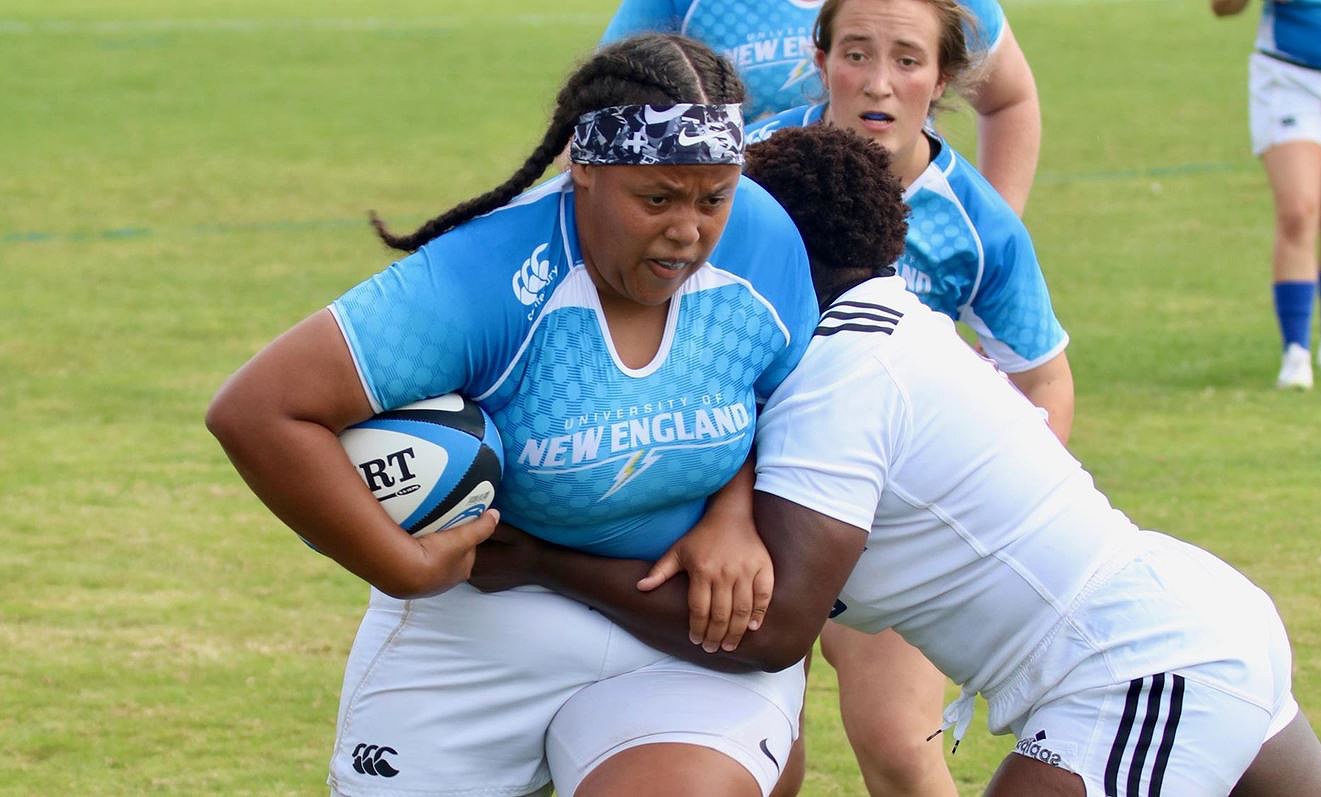 The University of New England (UNE) is heading to the National Intercollegiate Rugby Association (NIRA) DIII National Championship after defeating Norwich in last Saturday’s semifinals. The match marked the Nor’easters’ third victory against the Cadets this fall, and the reward is a return trip to the title match against reigning champion Bowdoin College.

During the regular season, UNE and Norwich played each other twice, and the Nor’easters won both outings: 19-15 and 29-14. But UNE wasn’t relying on those results to predict the teams’ third meeting, especially as the squad was constantly adjusting to personnel shifts.

For one, there were different people in different positions. Olivia Mitchell sustained a season-ending injury and now the center attack is driven by Mackenzie Burke and Brianna Dargin. Senior Emily Ramsey went back and forth between flanker and fullback depending on the team’s needs and remained a powerful spark in both crucial positions. Meanwhile, others began flourishing in their roles as the fall progressed. Senior Katie Berger is a confident flyhalf and play-caller, and new wing Meghan Smith has come back from injury and lit up the outside attack. The speedy finisher has racked up the tries this season and grows more dangerous with every touch of the ball.

“I definitely think our loosehead prop, Salma Bezzat, is one of the most underrated players this season,” said senior co-captain and No. 8 Alyssa Ehrenfried, a NIRA All-American. “She isn’t out there scoring a bunch of tries, but she’s created this amazing atmosphere between all of us. She’s literally one of the best players on the field and it’s something that fans or even coaches haven’t really been able to see. She’s always gaining ground, always making her tackles. She’s solid.”

UNE had two weeks to prepare for its semifinal and the team used that time to layer in more game strategy. Coach Ashley Potvin-Fulford introduced a second attack plan, and the team loved the opportunity to employ more thinking rugby into its game. This allowed UNE to switch between a forward pod-driven scheme with one that allowed the backs to gain meters out wide and score tries. The team was eager to employ these newly learned weapons against Norwich.

“We definitely talked about how it’s hard to beat a team three times, but all of us turned that nervousness into excitement. We knew we could do it because we had done it before,” Ehrenfried said. “The week leading up to the game, that was the hardest we had worked all year, because we wanted it that bad. And we focused on positivity, too, because our team can easily get down if one person is down. So that was the main thing: Stay positive and work hard.”

UNE took a 15-0 halftime lead, as Fiona Thomas and Ramsey scored tries, and prop Bezzat kicked a conversion and penalty kick. The second half saw Ramsey, Julia Mast and Burke score, and another Bezzat conversion afforded 32 points. Norwich sent Audrey Greeno into the try zone at the turn of the fourth quarter to prevent the shutout: 32-5 the final.

On the other side of the bracket, Bowdoin beat Colby-Sawyer 54-7 and will return to the national final this Sunday (stay tuned for an interview with Bowdoin’s Ella Slaby). The Polar Bears played UNE on Sept. 25 and won 41-12.

“When we played them the first time, it was at their home field and we got in our heads when it came to them and their fans being right in our ears,” Ehrenfried said of the regular-season match against Bowdoin. “We had a bad day and didn’t show our potential. We talked about that in our film review and we watched that old game. Everyone said, ‘That doesn’t look like us. The defense is clumped and spread out in other places. We’re not that team anymore.’ We’ve grown so much throughout the year, and I don’t think Bowdoin knows that we’ve been working this hard and how much we’ve changed in six weeks. We’re in such a better place now.”

UNE competed in the first official DIII NIRA National Championship in 2019 and dropped a 27-5 decision to Bowdoin. For those who experienced that game, getting back to the title match has definitely been a topic of conversation.

“One thousand percent,” Ehrenfried said of whether talks of redemption circulate throughout the team. “We have a big senior class – there are eight of us – and most us were there in 2019. The entire senior class is out there starting and being amazing, and we want to win so bad. We want to show that Bowdoin isn’t the only team in our division that can play rugby. We’re a hard-working team and we have to show that we’ve got this.” 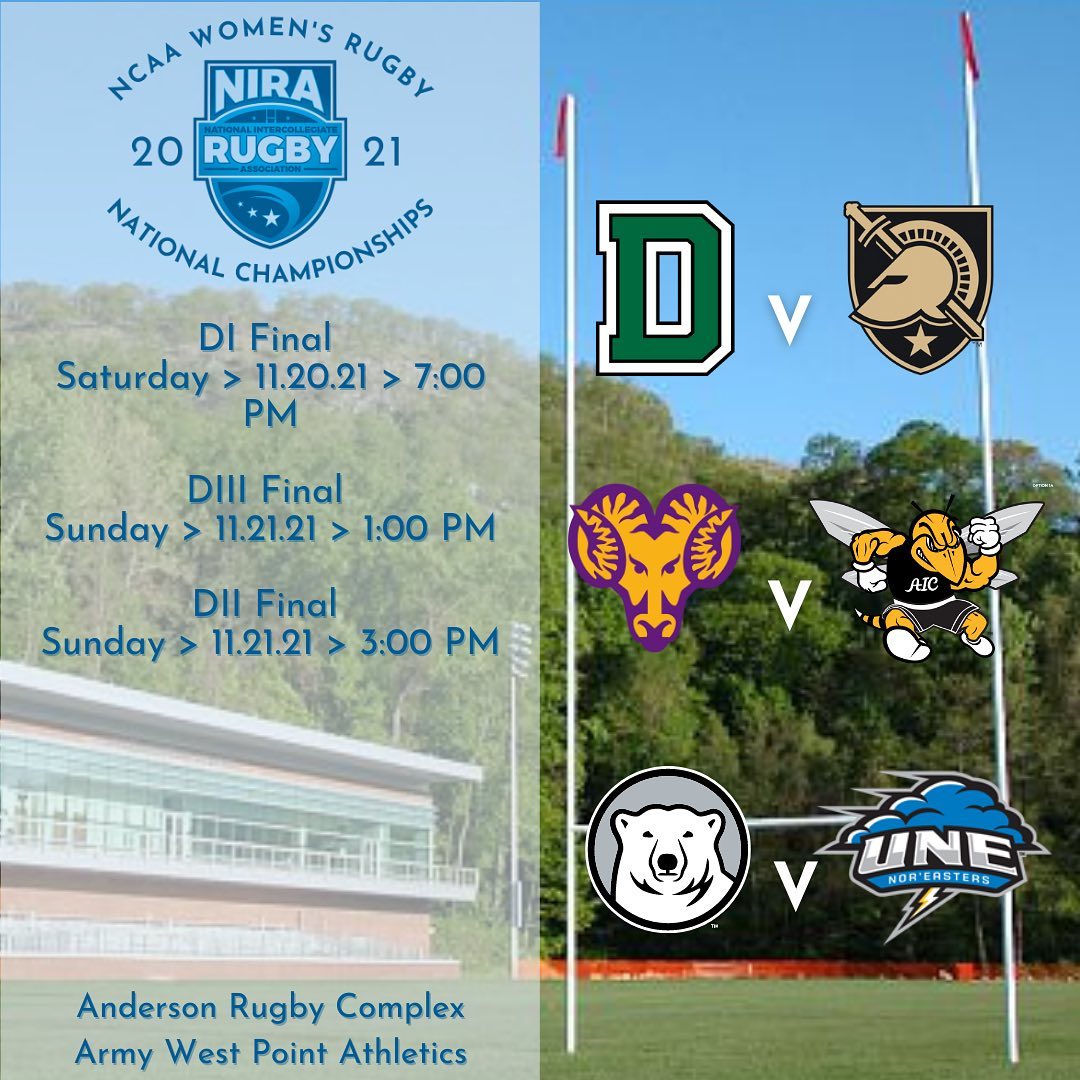