The DI Northeast conference returned all of its members this fall 15s season, and three out of five schools are fielding B sides to boot. Northeastern University, however, has experienced robust growth during the pandemic year and boasts a roster that could support three full squads. Head coach Keith Cattanach has added staff and adjusted roles, and a solid group of returners have not only provided continuity on the pitch but embraced the crucial responsibilities that impact retention. On Saturday, the Maddogs celebrated a 36-0 win against UCONN to improve to 2-0 in the league.

This time last year, Northeastern and the rest of the region were prohibited from training in person due to Covid-19, but the team did stay active during the 2020-21 school year. In fall 2020, Monday nights were reserved for virtual info sessions. The coaching staff created and delivered PowerPoint presentations that broke down the game and introduced plays. On Wednesday nights, assistant coach and current Boston WRFC player Maggie Reiss (UCONN ’14) would lead fitness sessions via Zoom. Both sessions were recorded and uploaded to YouTube for those who could not attend, and now the program has a solid online resource.

Zoom fatigue hit around Thanksgiving, so the team eased off until in-person training was allowed. Northeastern started with 10-people cohorts in the spring and then grew into full-team training. The school year ended with an internal touch 7s scrimmage. All of that activity not only kept the veterans engaged but also advanced the core’s rugby IQ, building some momentum into the fall. The Maddogs were poised to return approximately 30 players for the championship 15s season.

Cattanach explained that a normal fall might bring 20 recruits who remain with the sport. On recruitment night, more than 100 players showed up to rugby practice.

“After COVID, I was definitely surprised,” Cattanach said of the numbers. “The players who were recruiting at the school fair said, honestly, it was Ilona [Maher] in the Olympics that got people interested in playing. They did a shoutout and she saw it and reposted it. That was a big factor.”

Today, the Maddogs have settled near 70 consistent players, and that retention would not have been possible without a few key adjustments.

“Maybe it’s just increased interest, or maybe it’s how we structured our coaching,” Cattanach said. “We have one coach – Olivia [Giorlandino], who is a former player – she’s dedicated to improving younger players.”

Giorlandino graduated Northeastern in 2019 and is also the forwards coach. Reiss is the backs and fitness coach, and Caroline Angele (Northeastern ’18) assists Reiss with the backs.

“Having three other coaches really helps. I wouldn’t be able to do this without them,” Cattanach said. “We bounce ideas off each other, and know what each other’s thinking. There’s a major connection there.” 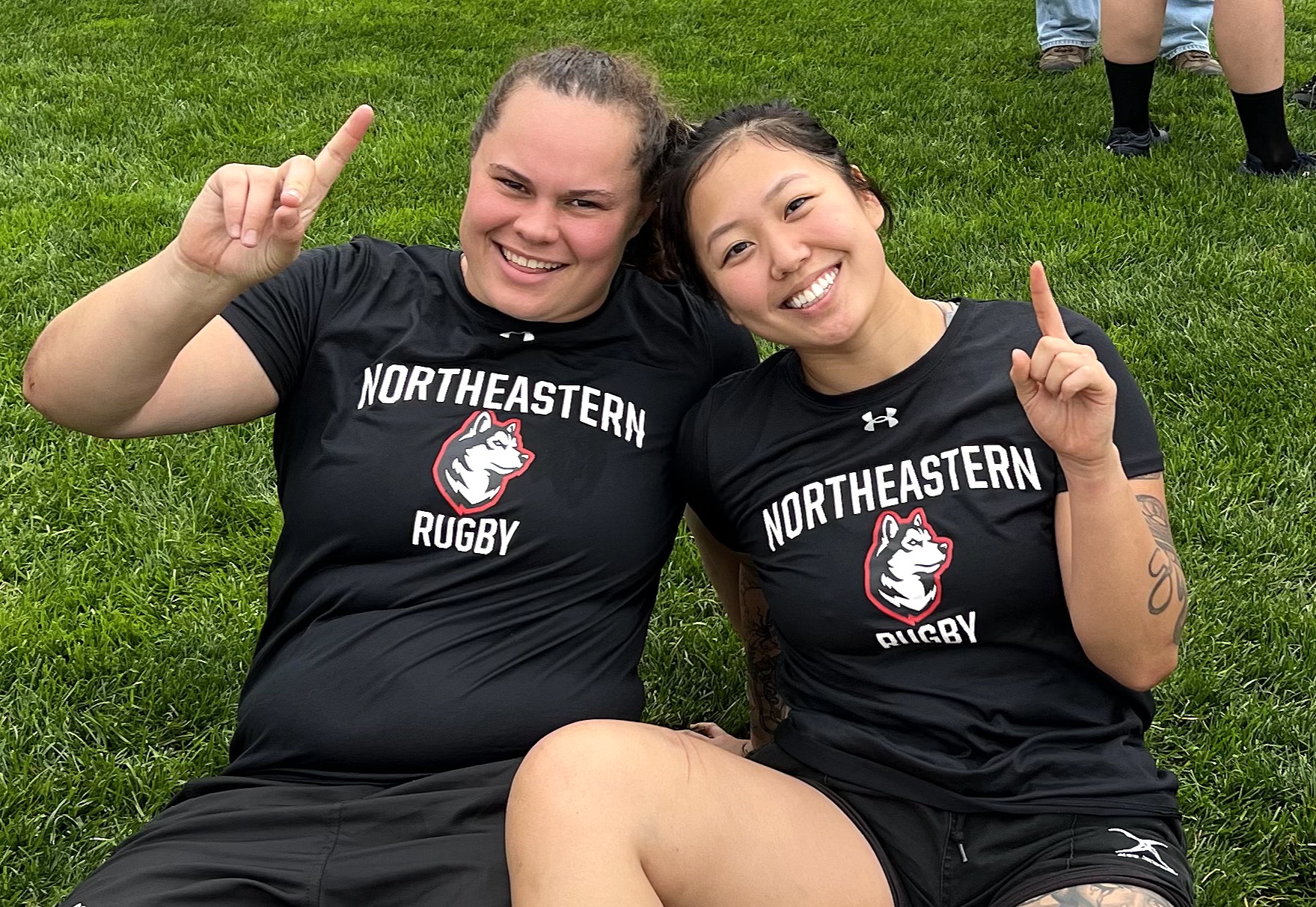 Co-captains Grace Arevalo and Caroline Swenson have also stepped up in leading such a large group.

“They’re leading the team quite well, but all of the veteran players are answering questions from younger players and getting them up to speed. We knew this was going to be a tough year with recruits and so it was, ‘Let’s put in the work and do everything we can for retention,’” Cattanach said. “We also have alumni coming to training Wednesday to do some scrum work with our B side, and we have good support from the local women’s clubs.”

Retention is an on-going practice, and Northeastern knows this.

“As a team we are focused on our culture and keeping that the whole time,” Cattanach said of major goals. “Basically we set the precedent that if you’re at practice and you’re attending, then you’ll grow. That’s what we push for.”

The Maddogs began the DI Northeast season with a 35-0 win against UMass, and that experience allowed training to evolve from a basics-only focus. The coaching staff introduced more challenges and mixed up rosters during the two weeks leading up to UCONN.

“The team had nerves for UCONN because they’re a great adversary, and we have mutual respect for each other because we expect a hard game,” Cattanach said. “At first the team was focused on what UCONN was going to do, but then this past week it changed into, ‘What do we need to do to win this match?’”

Defense was one of the answers, and Northeastern banked time getting that communication and sync together. The result was a second win and a second shutout.

“It’s no secret that we run a 1-3-3-1, and that worked out well for us,” Cattanach explained the difference-makers in the 36-0 win against UCONN. “We were starting to draw the defense in with pod crashes and such, and had a lot of wide plays, which we’ll work on more because we could have done a better job there. But our side-to-side movement was strong, and we got the ball wide like we wanted to. And some players, being in the roles that they were in, helped us as well.”

Juniors Arevalo and Grace Pattarini were excellent lead runners in the pod system. The former is very hard to tackle and set the tone as co-captain. The latter also made good go-forward and the hooker currently leads the team with 16 points this season – all off the tee (5C, 2P). Cattanach has also been impressed with freshman Ella Hughes (Essex, Vt.) who has been starting at lock, and grad student Madeline Eppley, who reinforces the front row at prop.

Several Maddogs played with the Boston Women during the summer and that translated into confident, shifty ball movement in the backs. Junior scrumhalf Maya Raghavan did an excellent job of managing the game alongside sophomore flyhalf Anastasia Hudak, who played in Hong Kong and did well to distribute and attack gaps on the pitch. Hudak and fullback Mireille Berry lead the team with three tries apiece this fall.

“Our game against UMASS was sloppy and we needed about 20 minutes against UCONN before our game came together,” Cattanach said. “UCONN held us to 14 in the first half. They had a good rhythm and a lot of new players, but they’ll still be a competitor going forward. We were just firing on all cylinders.”

The last time Northeastern and UCONN met in the regular season – Oct. 26, 2019 – the Maddogs banked their first win against the Huskies in a long time (read more). That was a two-point decision, and then UCONN responded with a 51-5 victory to win the 2019 DI Northeast title.

“We’re still on cloud nine. Everyone is more confident heading into the remainder of the season,” Cattanach said of the game’s impact. “But we take each game week by week, and we still have BU, BC and URI. The coaches and I will have to find ways to finesse the team and continue to improve.”

Cattanach is also looking for more B side games, as only Boston University has promised a second match after their league game. The coach has been in contact with NIRA’s AIC, Bowdoin and Queens, and is trying to match up weekends.

The full scope of the post-season is not yet known. The DI Northeast is now a member of the Collegiate Rugby Associati
on of America (CRAA), which is holding the DI and DII fall championships in Charlotte, N.C., the weekend of Dec. 4-5. However, the regional playoff system that leads to those finals has not been announced. Rocky Mountain and the Big 10 are the two other DI conferences funneling into the CRAA fall championship, and teams like independent Navy are also eligible for play-ins.