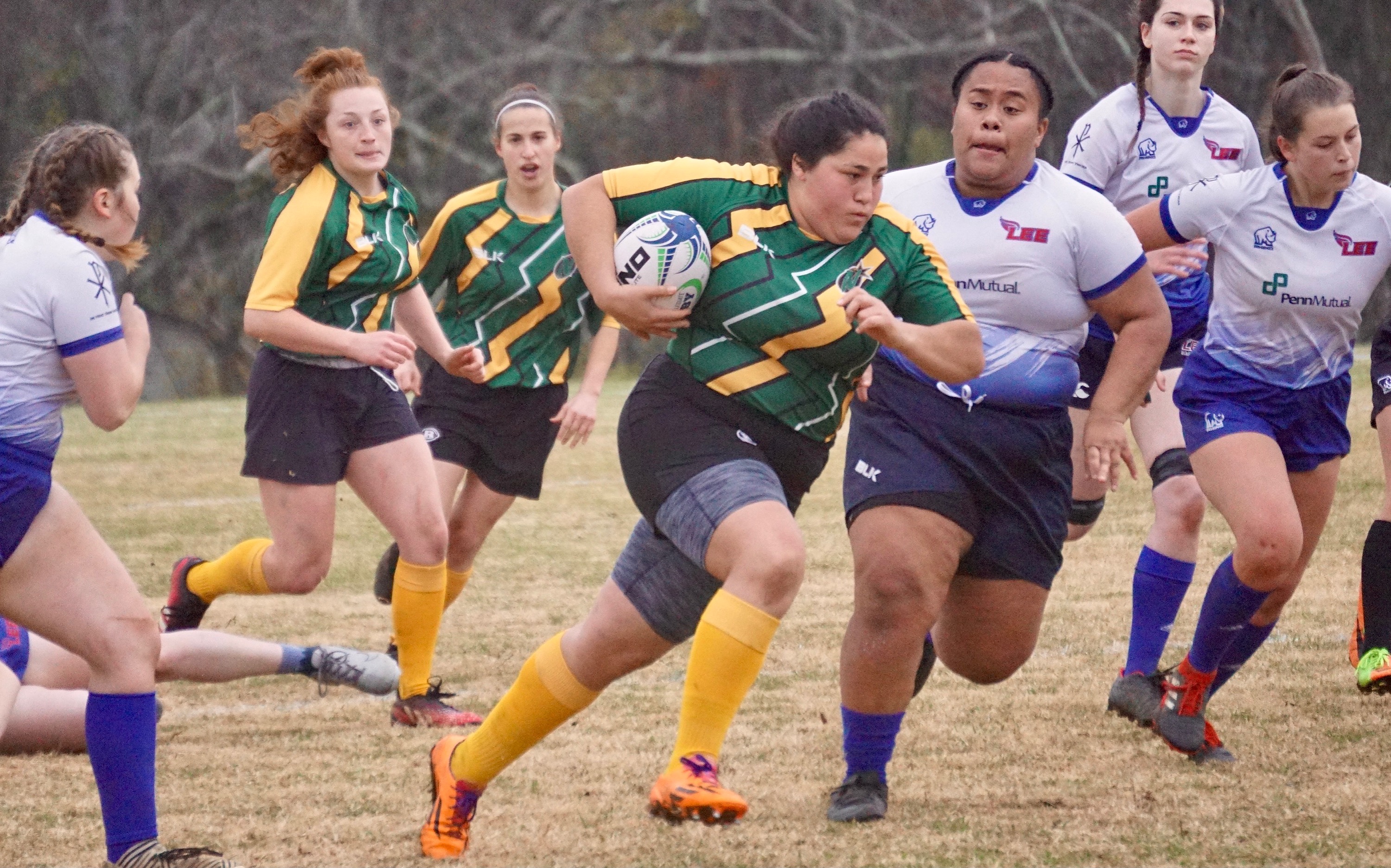 NMU had reached the national Round of 16 in fall 2018, and started the regional post-season against Wayne State College. It was a big loss that senior co-captains Chance McDougal and Kaitlyn Bammel weren’t eager to revisit, but the draw pit the two teams against each other in the national semifinals. The Wildcats won Saturday’s semifinal 96-5. 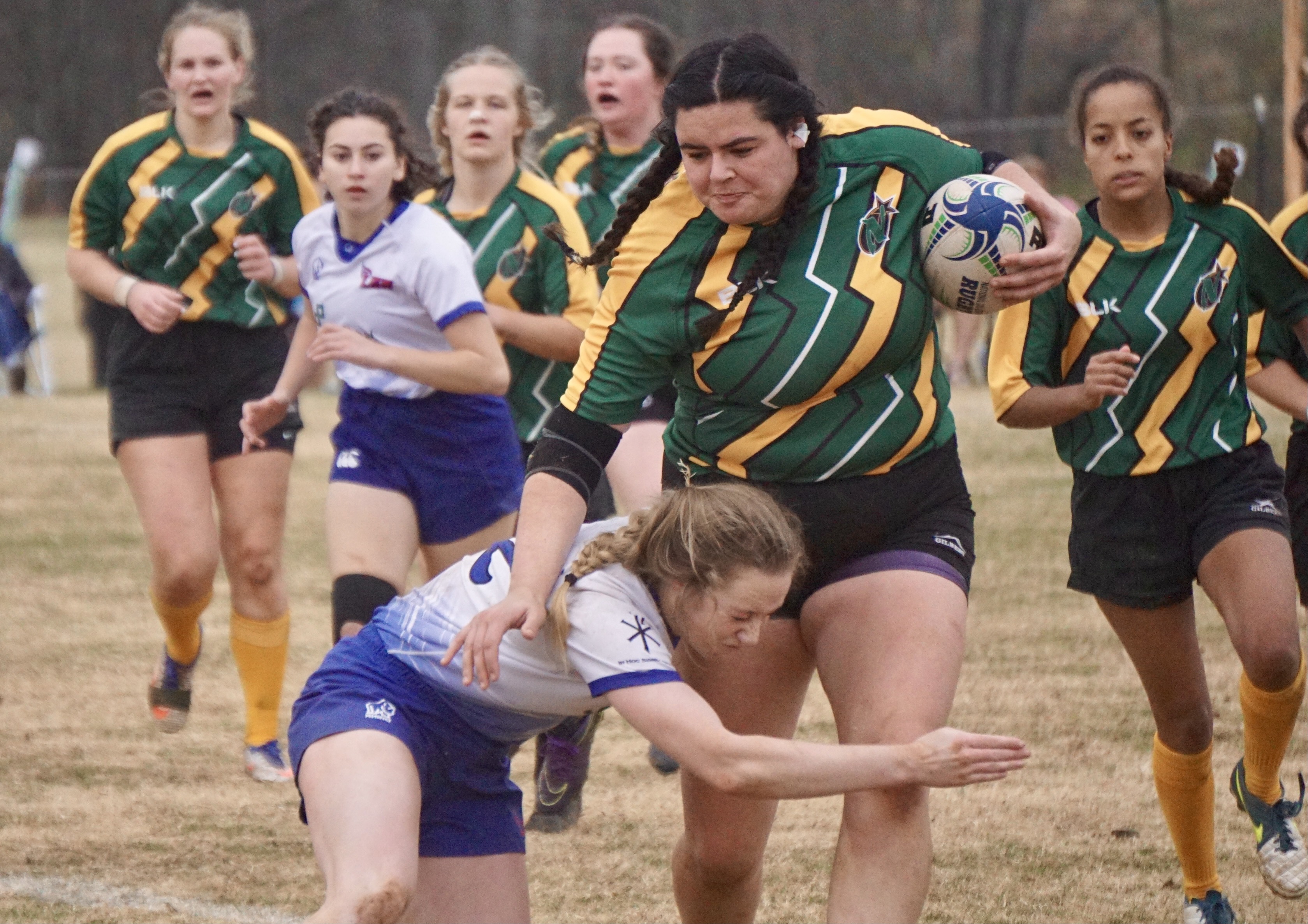 “I’d say, ‘mixed,’” Northern Michigan scrumhalf Claire Engmann said of the team’s spirits on day two. “We definitely got beat down after playing Wayne, but we had confidence in ourselves that we could bring it back for this game. And we knew [the 3rd place match] was going to be a closer game, a little more even competition, so we had high hopes for ourselves.”

On the other side of the bracket, Lee University dropped its semifinal 39-12 to SUNY Cortland on Saturday.

“Our offense was probably 90% of what we wanted it to be. Our defense was our biggest issue,” Lee head coach Chris Martin said of the semifinal loss. “A lot of players were just anxious going in. They weren’t cycling around rucks. They were very focused on the ruck itself and weren’t getting into defensive position. We push hard on the idea that if you’re in the right position, then everything else will work itself out, and we just never made it to the right place [Saturday].” 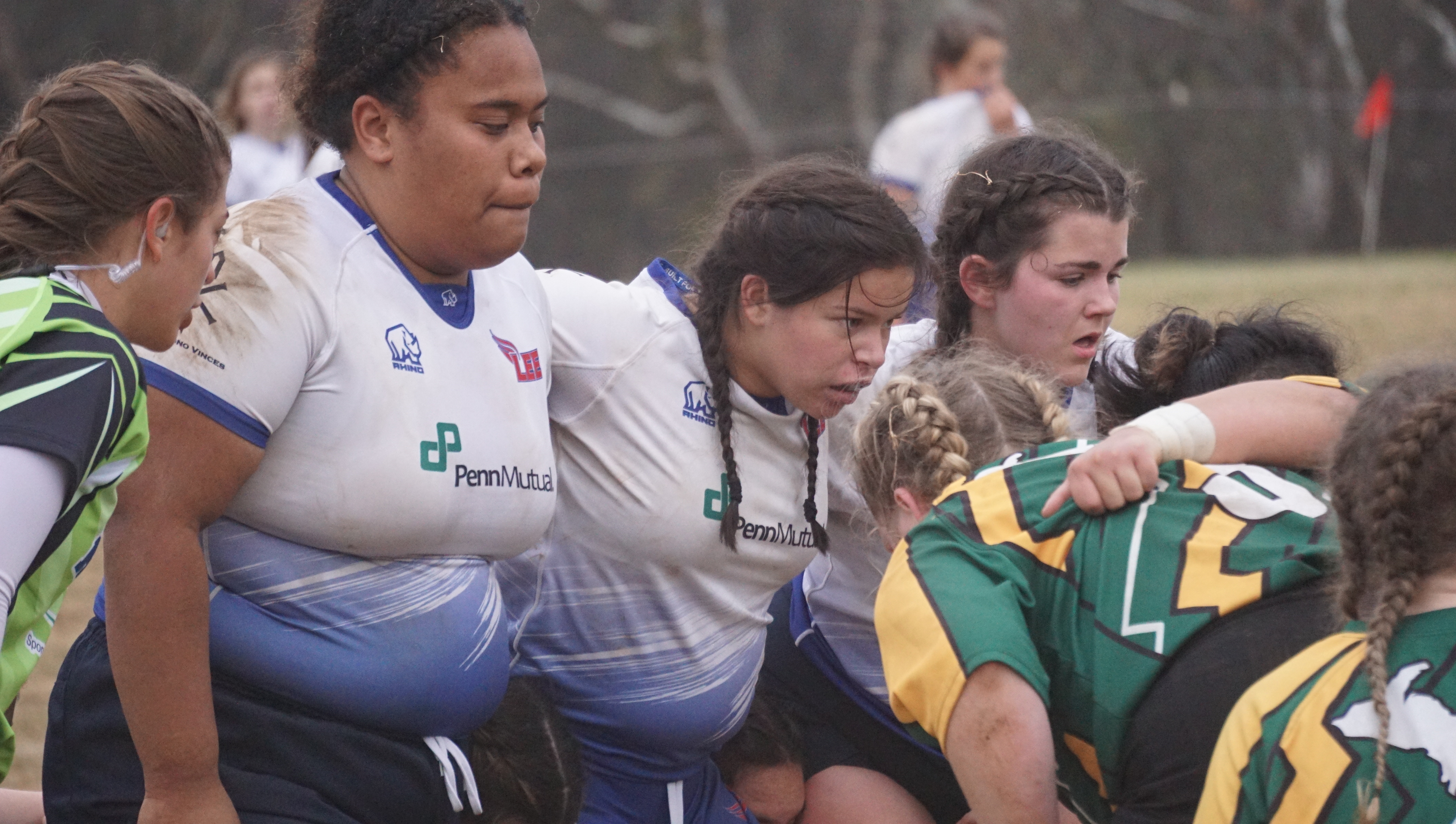 Third-place games can be tough in terms of motivation, but not at nationals, and Northern Michigan took control of the opening 10 minutes. Powerful carriers like prop Reese Hetherington, outside center Hanna McBride, and inside center Bianca Rosales – whose size was amplified by good pace – confronted the Lee defense. From a turnover inside Lee’s 22, Engmann dashed across the try line four minutes into the game and kicked the conversion for the 7-0 lead. 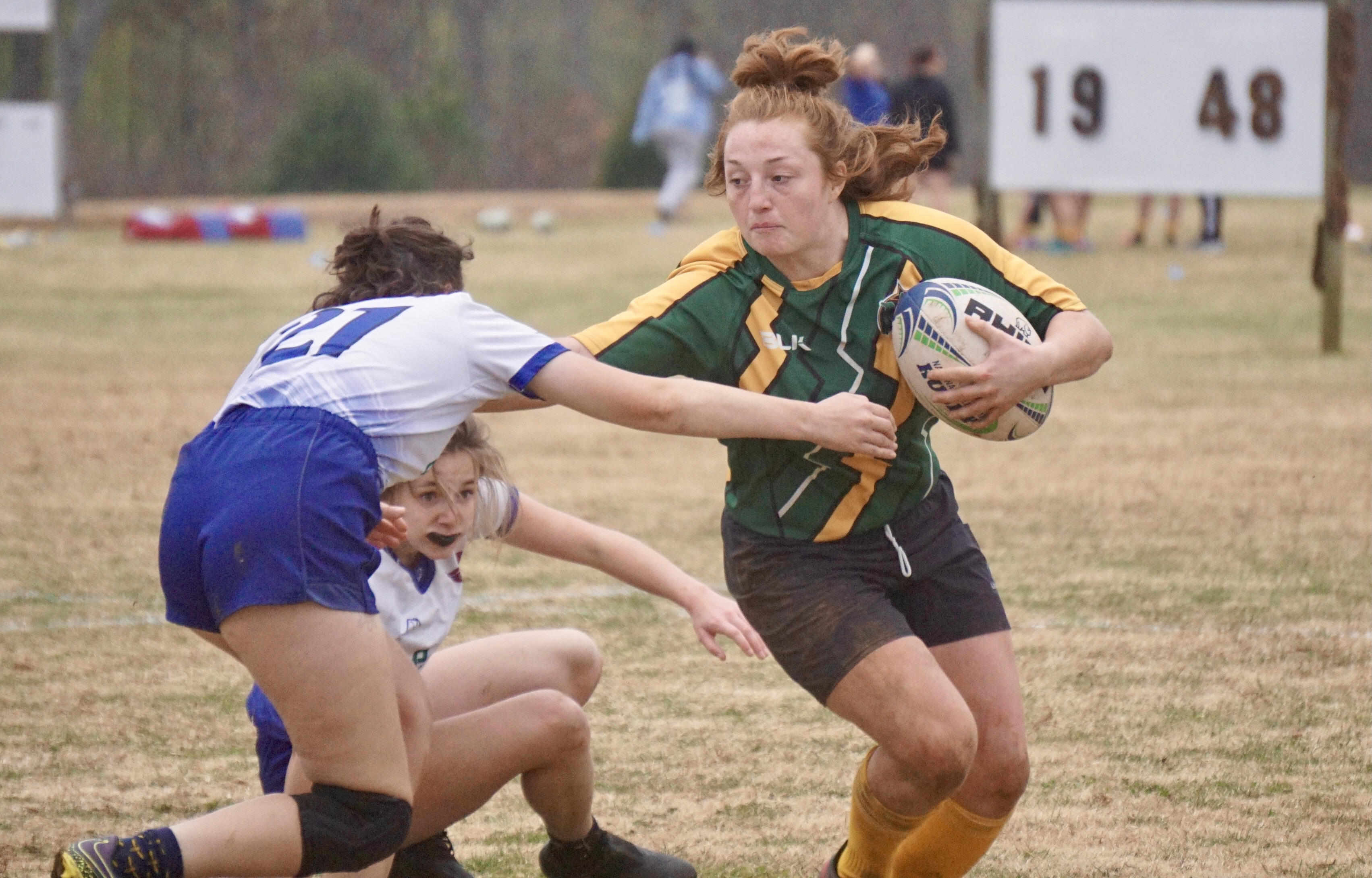 A deep restart put the game in NMU’s end and then Lee gained some momentum through penalties. Lock Kayla Sharpe scored at the 15-minute mark and flyhalf Siena Macy’s conversion made it 14-7.

Of all the teams at DI and small college nationals, only Life University JV (Nina Mason) and Wayne State College (Izzy Robinson) had the personnel with the skill set for a strategic kicking game (coincidentally, both teams’ kickers were named championship MVPs). But Macy heeded calls from the sideline and started to test Northern Michigan’s back three. It was an astute call, and the first big kick down field resulted in a forward pass, turnover and good territory.

Lee nearly scored through wing Holland Vaughn, but Rebecca Cheeseman did an excellent job of stripping the ball in the try-line tackle. Northern Michigan had possession on its tryline but then the ball hit the ground, confusion ensued, and no one dotted down the ball to halt play. Instead, Lee hooker and senior co-captain Anna Gilliam pounced on the loose ball for the try, 14-12. 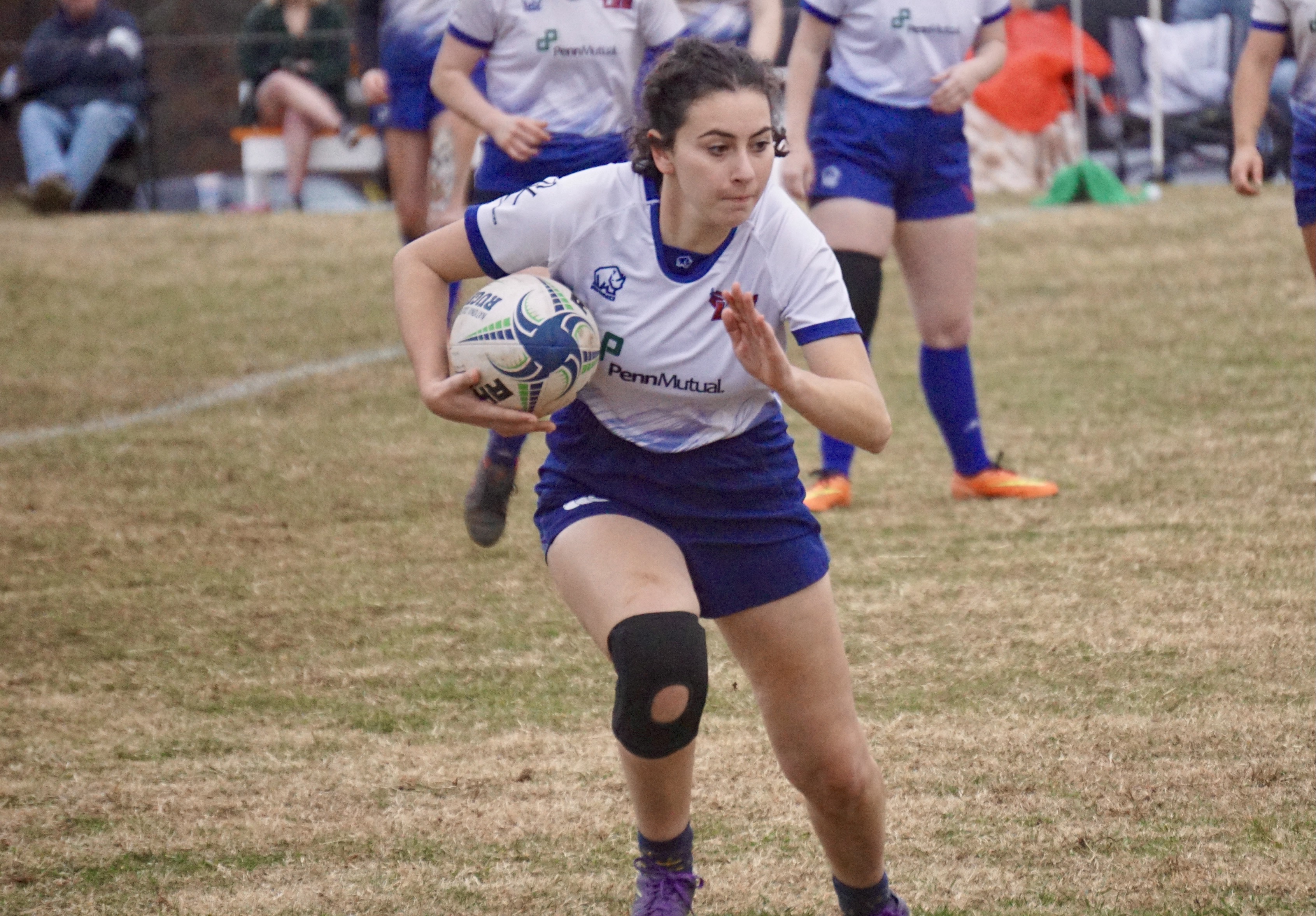 “We were definitely getting a little frustrated,” Engmann said. “Everyone was shouting in the huddles, everything that we could do better. We’ve been taking deep breaths in all of our huddles with our coach [Tina Nesburg], and we did that in the try zone after they scored. Take a second, deep breath, reset ourselves. We just needed to calm down.”

This was a major turning point in the game. Would Lee keep building on its momentum and overtake the lead? Or would Northern Michigan find a pivot point to regain control of the match? That question would not be answered for the next 15 minutes, as the teams stayed between the 22s. Northern Michigan was having better success in the breakdowns, retaining its own ball and jackaling some of Lee’s possession. NMU’s size hadn’t broken Lee, though, as players like Gilliam and inside center Jamee Lawyer leaned into every hit. 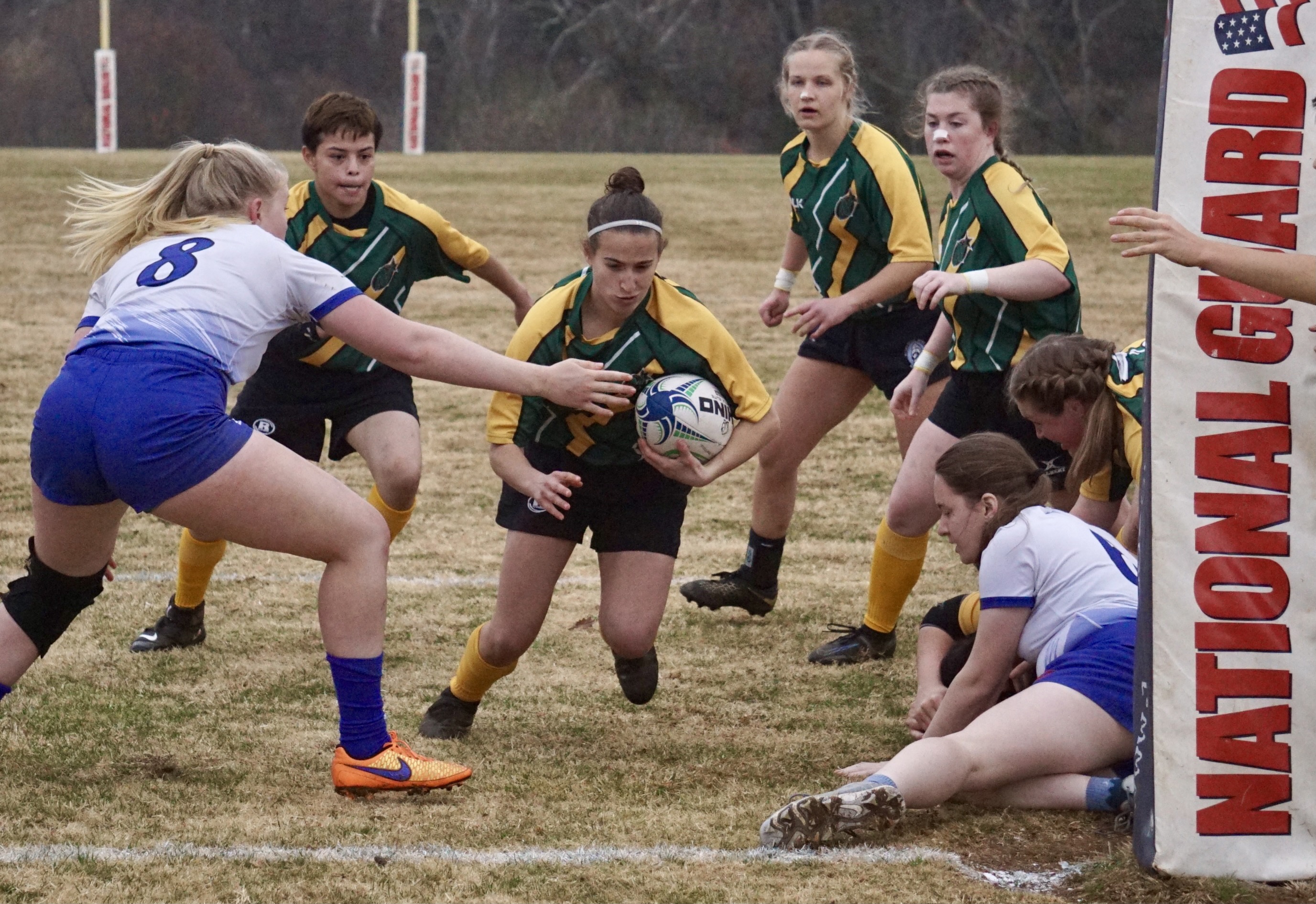 “[Lawyer] is just lights-out on defense,” Martin called out first-years. “She had several hits where I was getting texts from my men’s club that I play with. ‘Dude, your number 12!’ … And on offense, our #2 [Alyssa Woody] scored one of our two tries [Saturday] and she also had a super consistent game as far as ball-carrying. Again with all these brand-new kids there’s sometimes a big hesitancy in what they’re doing and she didn’t hesitate a single time. Good to see that consistency from such a young player.”

The final five minutes of the half, however, saw Northern Michigan surge. Struble and Engmann scored their second tries of the match, and a third conversion gave North Star a 26-12 halftime lead. Engmann did a great job all game attacking around the breakdown or turning loose ball into solid meters gained.

The second half resumed in Northern Michigan’s favor. A poach in Lee’s 22 put McBride in position to score (31-12), but then some trouble at the breakdown produced advantageous penalties for Lee, and Lawyer capitalized with a try. Macy’s conversion made it 31-19 with plenty of game to play. 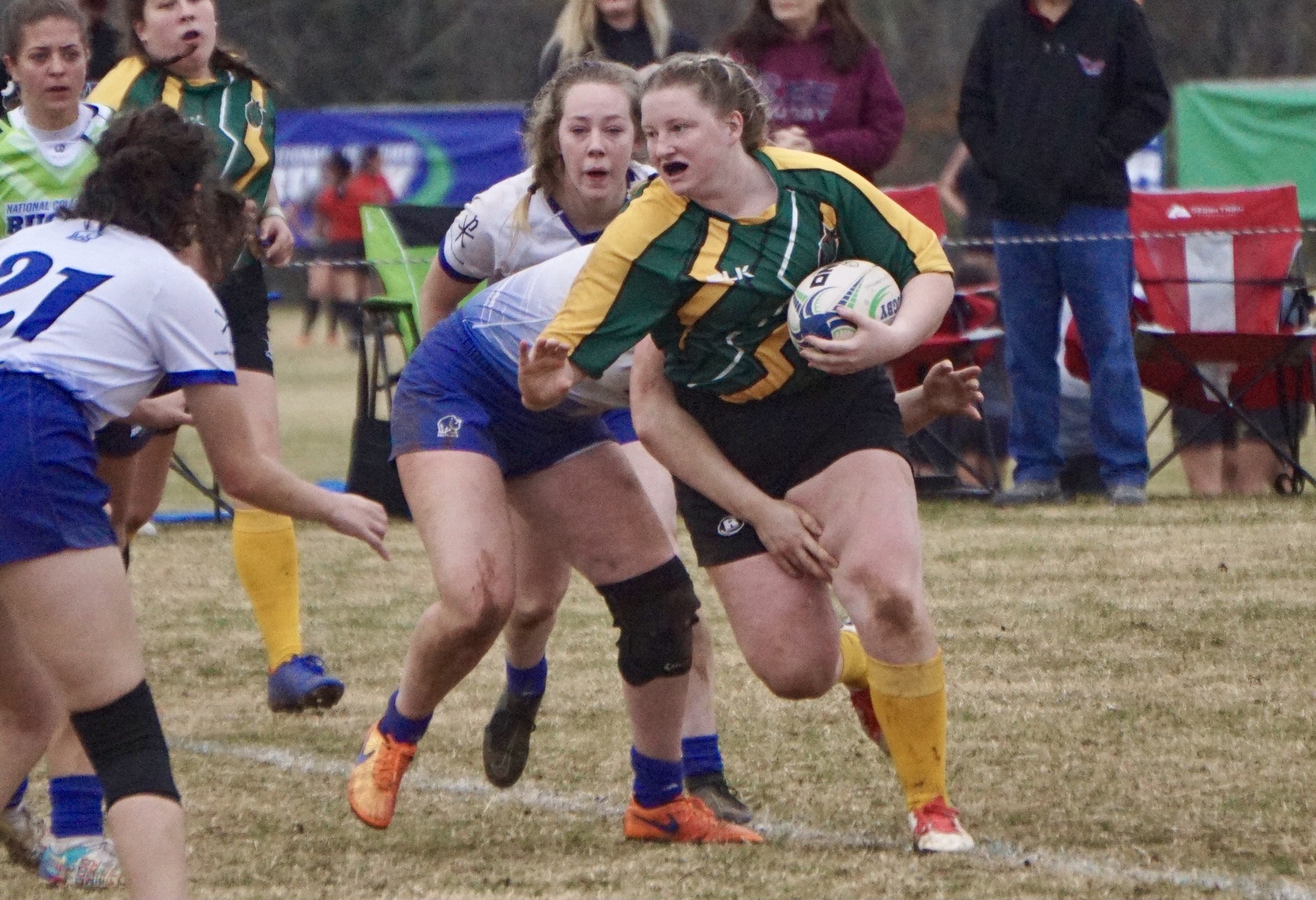 But there was no more comeback in Lee, as Northern Michigan answered immediately
and started to wear down the integrity of the defense. NMU kept the restart, ran through outstretched arms, and moved the ball to Rosales, who is so tough to stop with a head of steam. The center scored a second try in a similar fashion later in the match.

“Once we got our defensive line set and were launching together,” Engmann said of when the team game felt good. “And on offense, once we started supporting each other and setting the rucks, and just getting our line and controlling it – no crazy passes and rushing things.” 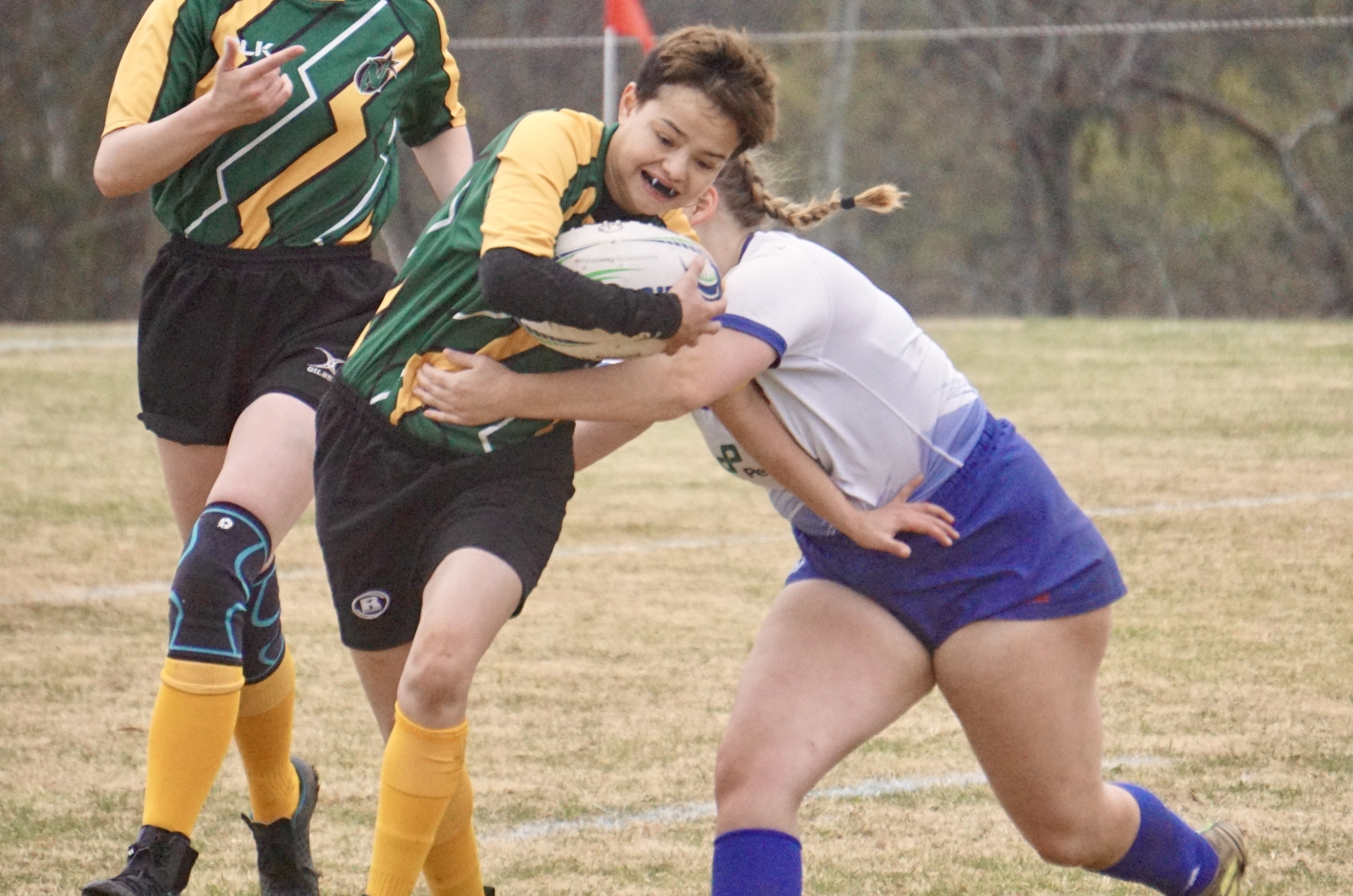 Lee had the opportunity to reset with an attacking scrum and put its fast backs into space, but an unexpected cutback ran away from support and Northern Michigan stripped the ball. Shortly afterward, junior president and flanker Rachel Placeway scored the first of her two tries in the 53-19 decision.

“A lot of people really,” Engmann thought on standouts. “Reese [Hetherington], Claudine [Bellot], Moose. A lot of the forwards did a really nice job of taking it forward nice and strong. Hanna [McBride] and Mini [Duran] on the wing – they were good getting to the outside and offloading to people that were in support.”

“It feels amazing,” the scrumhalf said of the win. “This was our first time in school history we got to nationals so to get that 3rd place – we’re really proud of ourselves.”