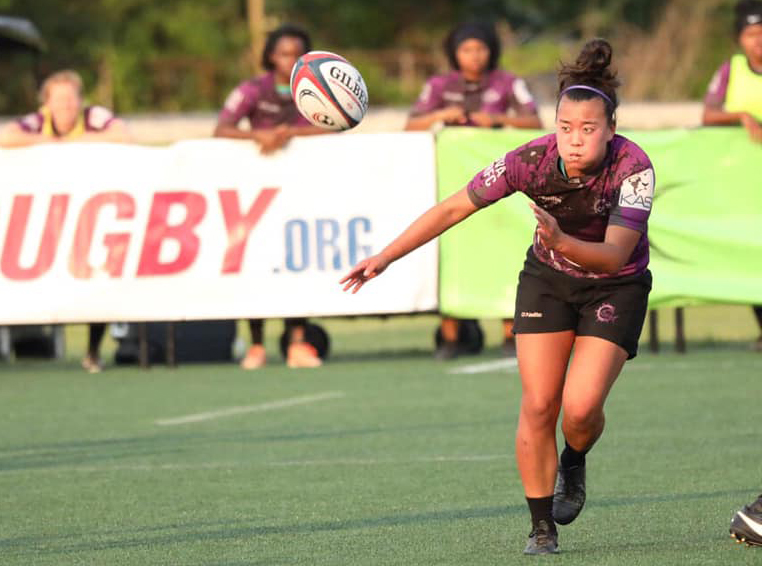 It’s been almost a week since Northern Virginia (NOVA) won its first-ever USA Rugby DI Club National Championship. Scrumhalf championship MVP Bri Kim has now had time to appreciate the achievement and the brutally tough Austin Valkyries. With that said, Kim and team are already thinking about next steps to improve.

NOVA scored the first try of the match, but Austin commanded the next 20 minutes to eventually take the lead. Kim recalled missed kicks to touch, lost set pieces and slow adjustment to the referee – eventually resulting in a yellow card to an important player – that starved the team of possession and favorable territory.

“Honestly, I don’t think there was a certain moment where everything felt like it clicked into place,” Kim noted. “I think things started to turn our way once we won that defensive scrum about midfield and were finally playing in their 40. Once we actually had possession, we were able to string phases together and have continuity, which allowed us to come up with that try to ride a little momentum into halftime.”

That second try produced a 12-12 tie into the break, and it was the result of NOVA getting back to its plan and regaining some composure and control. Austin had its own plans and would take the lead in the second half.

“Austin really challenged us with their constant field reversals, having strong ballcarriers on either side,” Kim evaluated the Valkyries. “We knew their flyhalf [Jordan Heller] was going to be the biggest threat and their command center, and our back three prepped very well for that, but their loose forwards in particular were very good at spotting the holes in our defensive wall and exposing them. They were able to get good go-forward on that, especially when our hips were already slightly turned, anticipating the ball going the opposite direction. In order to adjust, we had to adapt our game to the ref and make sure we were effectively launching from both sides of the ruck.”

The game never spiraled out of control for either side, and so NOVA was able to stay calm as it closed in and reversed the point differential. Kim reflected gratefully on the game’s opening try, when Kate Lutton set up wing Steph Barros, who did the extra work to center the try. That effort made Kim’s conversion attempt easier, and ultimately, the comeback easier.

“It might seem like big, highlight reel plays that make the comeback but truthfully it’s the little things,” Kim explained. “[Chrissy Metzmaier] Crusty unfortunately didn’t get as many offensive opportunities as I would’ve liked her to have had but her ‘ball and all’ tackles on defense were crucial in preventing more Austin tries. Kay Onyekwere is the definition of an impact sub/finisher, and her constant go forward carries set the platform for our scores in the second half.”

NOVA carried a two-try lead into the final 12 minutes of the match and the defense surged to make sure that Austin didn’t have the opportunity for back-to-back surges. While the team was disappointed to let up a final try to end the game, it was a concerted, patient defense that killed the clock and allowed for just one score.

“These leaders gave different dimensions to our staunch defense,” Kim thought on defensive MVPs. “[Steph Iacobucci] Bucci’s dogged and tenacious work rate was unmatched, not to mention Bucci created turnovers for us in the first half that we desperately needed. [Liz Wilson] Moose’s thumping hits were consistent all game, as well as her bulldozing carries on the other side of the ball. And of course, my co-captain who truly leads by example, Avery Rain, was a rock wall on defense and hard, go forward carrier on offense. On the flanks, our front three – Emily Blease, CJ Hildreth, Ariel Johnson – truly led on each launch, with both experience and aggressiveness.”

As Heller’s conversion sailed through the uprights, the final whistle sounded, and elation followed.

“It’s incredible,” Kim returned to that moment. “To bring the title home to NOVA is a tremendous honor because as a NOVA player, you truly understand how much it means not just to the current players and coaches but to the rich sisterhood and family behind this club. This club has and always will be full of talent, dedication, and most importantly, commitment to one another – from players, to coaches, to every person part of NOVA Nation. There’s a reason alumni are always coming back to games, practices, and financially supporting us. Every person that is a part of this club, no matter how old or young, comes in humbled, hungry to learn, and ready to work for one another – and that’s what’s made this club so successful for such a long time.”

The national title has stoked an even deeper hunger to keep achieving, and while the squad has reveled in the past week, it’s equally eager to get back to work.

“We put in a lot of hard work and solid performances to get to where we are now but we certainly weren’t perfect,” Kim concluded. “We’re already going back and reviewing the strengths to carry on through next year, and the weaknesses where we got exposed to focus on and sharpen, both on and off the field. To be a part of the first title is a blessing but to be able to achieve multiple titles wearing the purple jersey would mean even more.”

Fortunately, there’s an immediate, dense summer 7s season to absorb all of that enthusiasm.