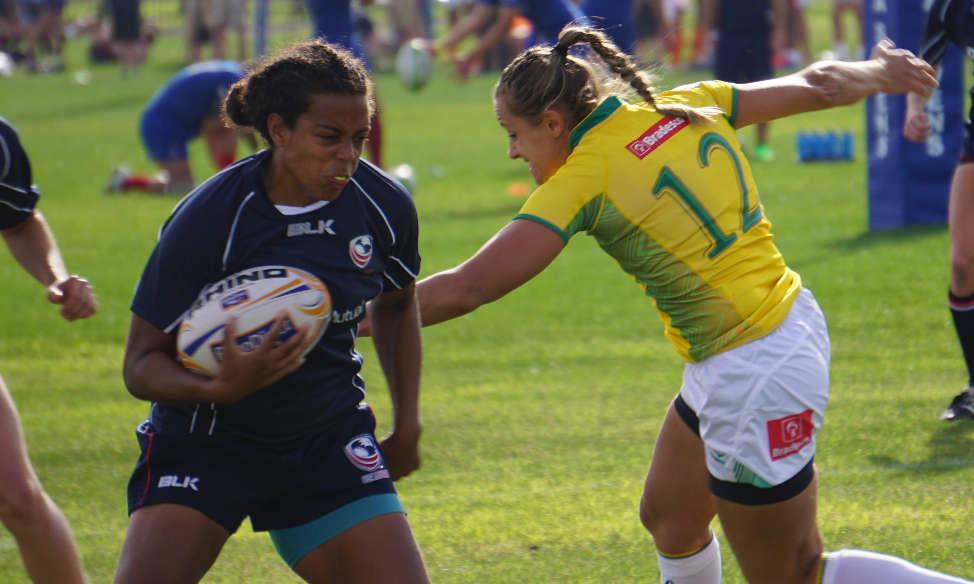 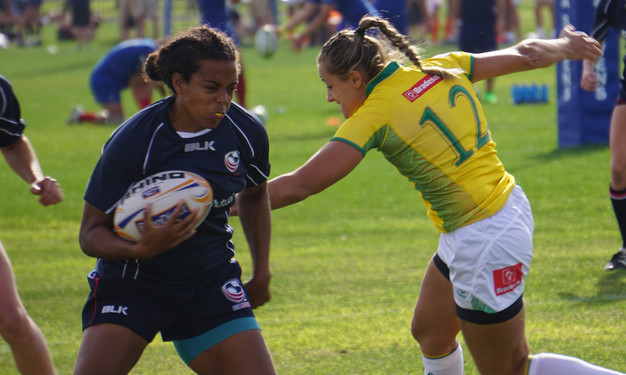 The USA Falcons, presented by sponsor Penn Mutual, went 2-0 today in the LVI’s Women’s Elite division. The representative side was composed of capped Eagles who are attempting to make the Olympic squad, and the group beat Brazil 36-0 and Stars 2 40-5.

Naya Tapper and Ashley Perry are two of the newest Eagles in the mix, and the pair took some time between games today to talk about their first international caps in Sao Paulo and the stakes in Vegas.

Sao Paulo was your first international tournament. Can you talk a little about what it’s like to play on the world stage?

TAPPER: I played the last game of the day on Saturday, in the last minute, and did pretty well for the time that I had. [Coach McCoy] is just easing me in. Then the next day I played a little bit of each game. It was a good experience playing a higher level internationally.

PERRY: You’re being modest – that try.

That’s right, you scored that big stiff-arm try during your first minute. How was that?

TAPPER, laughing: I was very happy because I was a little down about not playing [in the first two games] but had to stay optimistic about it and know that when it was my time, it was my time. And that ended up being a great way to make up for it.

World Rugby kept playing that clip of you celebrating.

TAPPER: All my friends made fun of me because I was crying – tears of joy. It was really good to receive that much support from those whom I’m try to prove myself to. That was reassuring.

PERRY: It was emotional for all of us. I was so happy she got her try in such an amazing way.

TAPPER: Perry got her try in, too.

PERRY: I did. Sao Paulo was a great experience. I’m glad I got my feet on the field and my jitters out. I want to work off of that – getting my conditioning in and being able to go full force and know that I can put everything on the field, and have my teammates’ backs and hopefully make things happen.

In Sao Paulo, did anything – the speed of the game, physicality of opponents, etc. – stand out as markedly better than what you are used to?

PERRY: Coach has put me through the steps so I can go out there and perform. So it wasn’t that much of a jump – I knew what to expect. There was a lot of film review and preparation in practices, so it wasn’t that much of a shock. When we have people coming in and scrimmaging, we’re working out those bugs. That’s when I notice a jump between academy and international.

TAPPER: Another thing is just transferring from 15s to 7s. I played 15s in college and we were a club team, so we weren’t playing at the level we are now. Physically, it was fine for me, but conditioning wise … playing seven minutes but running 100% the whole time. That was a big difference for me.

Did you face any memorable opponents?

TAPPER: Ellia Green from Australia. I ‘ve watched her a couple times because I’ve been told that I replicate her in some ways. She’s really fast and big and she’s a wing, and that’s kinda how I am. So I watched her on t.v. and it felt good to test my speed against her. She’s really fast and she’s someone I constantly competed with down the sideline.

PERRY: I agree with that. When we had a lineout, she just knows what decisions to make. She reads it. She had an upper hand on us.

Is there a different feeling to this tournament in Las Vegas, since it’s not on the World Rugby circuit?

PERRY: In our jersey ceremony – we’re a part of the U.S, and we’re on our soil. We have to represent ourselves for our country. It means a lot.

TAPPER: And me and Perry are still kinda new to the OTC and our teammates. We’re out here still trying to prove ourselves and to show coach that we deserve to be on the team and have that spot.

If you make it to the final four, then you’ll play inside Sam Boyd Stadium. Any nerves with a crowd like that?

TAPPER: I get pumped.

PERRY: I try not to think about it. It’s really just same stuff different day. I focus on the connection with my teammates, so I don’t have that extra thing about listening to the crowd or them saying our names.

TAPPER: The rowdiness and the pumping-up and the music and the yelling, it calms me down. It just reminds me to have fun. To dance – on the field in a good way, like running, but it helps me out a little bit.

Do you two find youselves playing together much on the field?

PERRY: We’re working differeant areas of the field. She’s pretty strong on her own, pretty square in contact when she does take contact. I like to try and support people like Kris [Thomas]. Basically be there for the offload. I want to talk to them and make sure theyr’e comfortable with offloads. And if we need to ruck, then ruck. That’s my job.

TAPPER: I just need to catch. And run.

The USA Falcons will play the third pool game against South Africa at 8:40 a.m. PST.