Angels captain Jaime Filipek pulls away from NOVA during a fall friendly.

By 2014, Pittsburgh had outgrown Division II. The Angels were regulars at the DII national championships (winning in 2012 and 2014), but had distanced itself so far from its league-season opponents. The result was an inefficient and unfulfilling build-up to nationals. So in the fall of 2014, Pittsburgh left the DII Midwest for the DI Mid-Atlantic (MAC), and set modest goals as it entered this unfamiliar league.

“We wanted to move up and maintain being competitive,” said Pittsburgh spokesperson Angela Smarto, a Penn State alumna who joined in fall 2012. “We had scheduled friendlies with DI teams before and were successful, so we knew we could compete while raising our level of play.”

But to Pittsburgh’s surprise, the Angels turned out to be the team to beat, finishing the league season undefeated. That unblemished record included two wins against traditional MAC powerhouse NOVA as well as an automatic berth to the Eastern Championship.

“I thought we would do well, but … we just didn’t want to be a rollover team,” Smarto remembered. “That happens sometimes when a team moves up a division. We were very proud of ourselves for maintaining that trajectory of winning into DII to DI.”

Pittsburgh defeated Detroit in the first round of playoffs, and then faced Beantown in the Eastern Championship final. The Boston side was a founding member of the Women’s Premier League and participated in the elite division from 2009-2013 before relegating itself to DI.

“Beantown was a little more – not a reality check – humbling,” Smarto said. “We knew we were really good, but not as good as the long-timers.

“Beantown has a different skill set,” Smarto explained. “In DII, you can out-athlete teams without necessarily needing to out-rugby them. In DI, everyone has athletes, so you need to have a game play, be able to execute, be fit – all of those things. That’s the biggest difference: playing against more knowledgeable players.”

Pittsburgh gleaned a lot of confidence from its first DI season and was eager to start working again in the fall. Unfortunately, the second half of 2015 was not as fruitful as the first. Keystone folded, leaving two vacancies in the schedule. Denver Black Ice, NOVA, and Penn State provided tough friendlies, but the Angels ended up playing only one league game (53-7 win vs. Severn River).

“The fall felt like being on hold,” Smarto said of the light schedule. “You can practice as long as you want, but you have to play games. Four games is not enough playing time.” 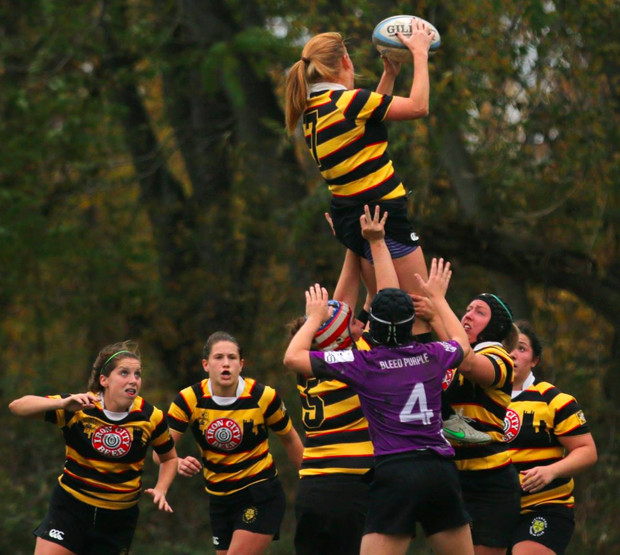 That puts pressure on the spring, but Pittsburgh is embracing it. When the Angels retake the pitch, watch for longtime captain Jaime Filipek to lead the way. She moved from hooker to inside center this season, and first-year captain and back row Annie Buches has assumed forward duties.

“In the past, our forwards have dominated, but our backs are dangerous,” Smarto said to a shift in style.

The ball likes to get wide and into the hands of players like outside center Jessie Young, an excellent athlete with physicality to boot. Raleigh transfer Raven Jones has been a great addition to the back three, immediately inserting her extensive experience into a leadership role. And of course there’s Donita Thomas, the resident fullback and game-changer.

“I’m confident in our chances to win most of the time,” Smarto said. “I don’t think we would be dominated by any one team. When we played in DII, we knew we were going to beat our league opponents by 80 points. But that doesn’t happen anymore; in fact, we know we’re going to get scored on, and we might be losing at some point in the game.”

Pittsburgh is eager to continue testing itself and will play Severn River and Philadelphia twice to round out the league season. The MAC will host a final four weekend, bringing the top two teams from each pool to name its geographic union rep to Eastern Championships. The MAC resumes play in April but member teams have packed their schedules with strong friendlies in preparation for playoffs. Stay tuned.