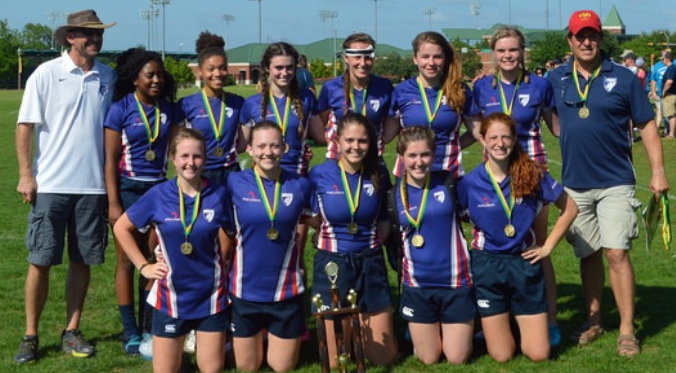 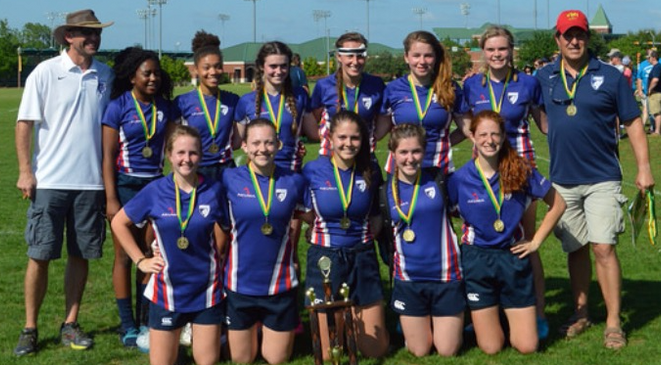 Texas launched its girls high school 7s league in 2014, and that first season saw eight teams vying for the inaugural title. Three seasons later and the field competing at various Texas Cup tournaments has doubled, cultivating a true standings race to the state championship. The top eight teams convened last weekend for the final tournament, and 2014 titleholder Plano rallied from an early pool defeat to beat standings leader Kingwood 33-0 in the final.

“The level of play is absolutely getting better,” Plano co-coach John Hunter reflected on his three years with the girls’ team. “Two years ago, if a team had one or two good athletes, then they could dominate the field. Last weekend was chock-full of outstanding players, and it now comes down to team play. Who can pass? Who can think critically and tactically? Who has more fitness?”

Those questions took some time to answer on Saturday, as Plano faced crosstown rival HEB, the 2015 state champion, in pool play and lost 7-5.

“We have a quite a few returners, but the game’s not for everyone. Kids show up and disappear,” Hunter explained. “Month to month, there’s a different set of players, and the team that plays at one Cup match to the next can be vastly different.”

Fortunately, Plano has a good core of experience that keeps the team on track, and with eight returners for next year, the near future is bright. Leading the way was flyhalf Niahm Savage, daughter to co-coach Jon Savage. The senior has committed to DI varsity Quinnipiac University for fall 2016 and was named championship MVP.

“She was masterful. She’s got a very strategic mind,” Hunter said. “She has a fantastic dummy pass and is able to elude defenders and set up outside runners for scores. She’s also our kicker and hit almost all of her conversions – that can make a tremendous difference in 7s. We’re going to miss her.”

Victoria Waller, daughter to the boys’ team head coach, has been a staple to success as well, as has forward of the year Reagan Hunter. They helped Plano overcome pool leader Round Rock in the semifinals, setting up a title bout with single-school Kingwood.

“They had been around for a while when we showed up in 2014,” Hunter said. “They’re an excellent team and their players have been recruited to college rugby schools and played at the international level.

“The final started slowly. The teams were well matched,” the coach continued. “We have some really talented players who can turn over the ball and create play at the ruck. That’s a signature for all of the Plano teams. Our forwards maintained our ball and poached enough times that we eventually put our really talented, athletic wings around the corner and down the stretch for points.”

The 33-0 victory was an emphatic win against a good team, and the staff was proud of the way the squad rallied after defeat.

“It speaks to the character of our girls,” Hunter said. “They were a little beat up, had 11 going into the championship, and each was called on to expend every last ounce of energy.”

The effort paid off and now Plano has the beginnings of a legacy, claiming two of three state championships and setting the standard for 7s play in the state.