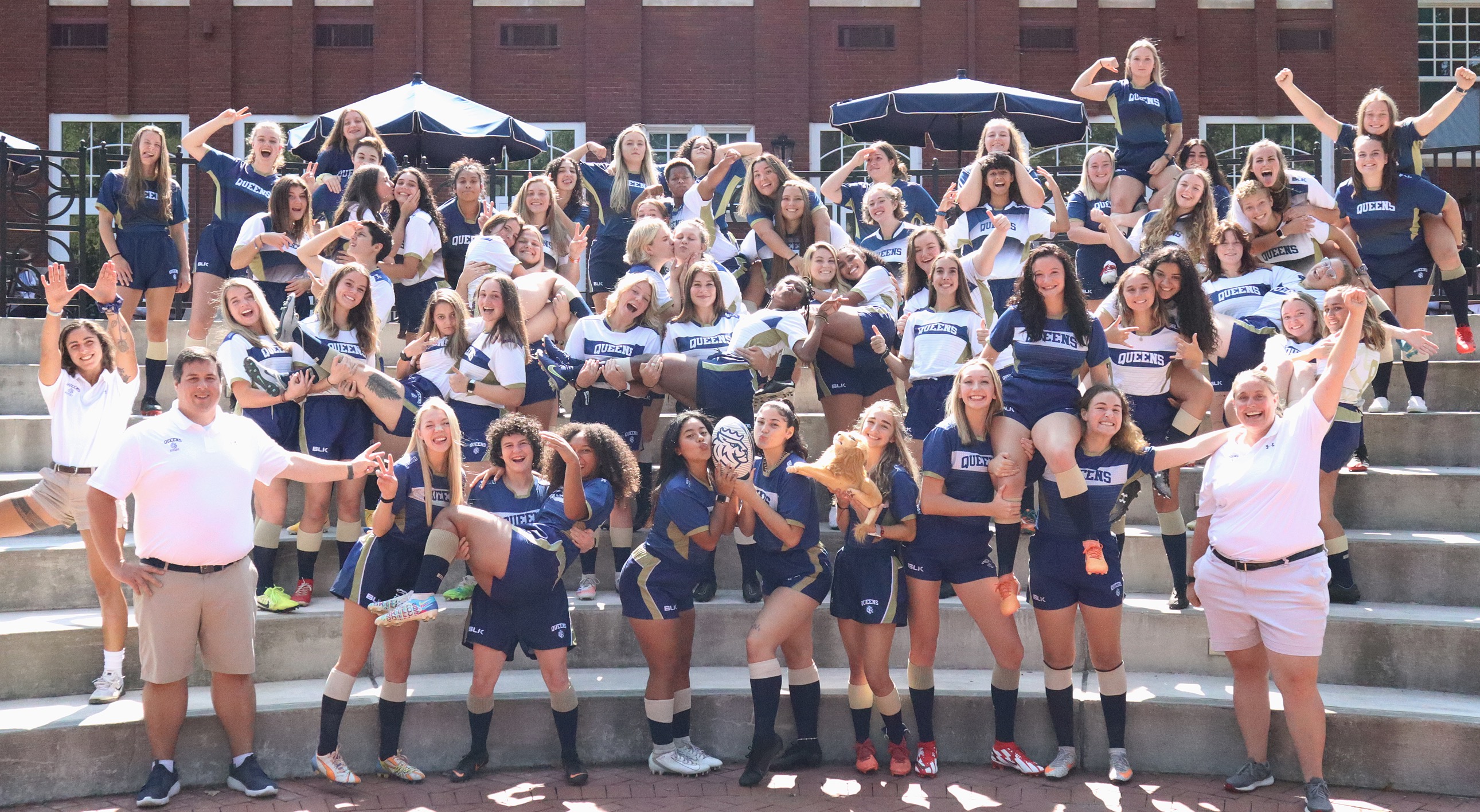 Queens University of Charlotte has not played an official National Intercollegiate Rugby Association (NIRA) conference game yet; however, the Royals have already banked multiple victories this school year. The North Carolina team is celebrating its fifth year as an NCAA DII varsity program, welcomed 60 student-athletes to the roster this year, and in its seven wins this fall has only allowed one try against.

Queens had a very strong recruitment class this year with 23 freshmen joining the roster, accounting for 38% of the player group. Those numbers aren’t magic but the product of hard work from the staff and student-athletes.

“We tried to make a lot of connections to clubs and coaches, and that relationship-building has been pretty key for us,” Queens head coach Katie Wurst said of the good numbers. “We are really proud of the university that we represent, and that comes across as very authentic and helpful. So that’s what we work on: Knowing who we are and making sure we can share that with other people.” 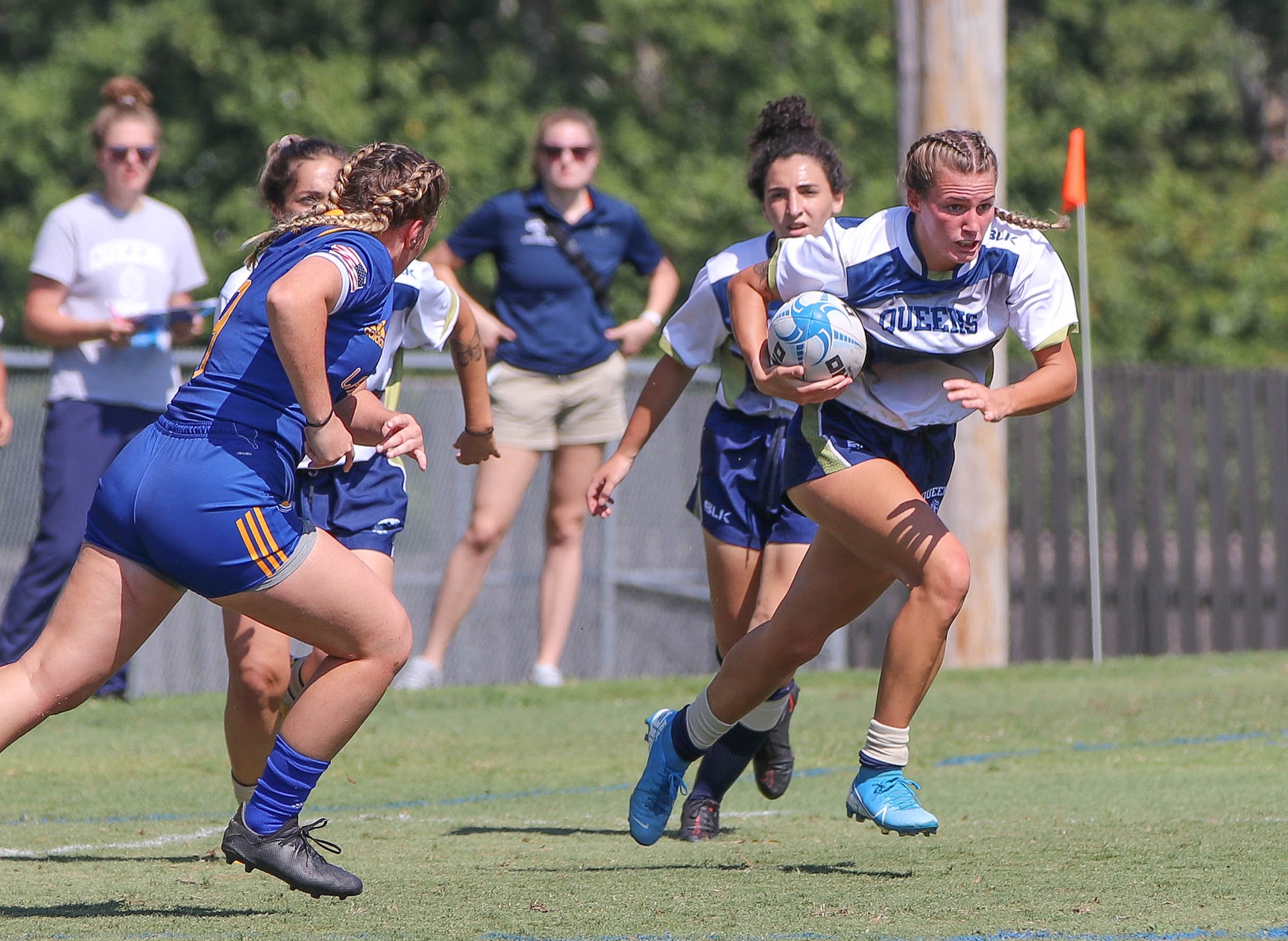 Queens connects with the community. Players are involved with youth teams, community service is a priority, and they’re visible members of Charlotte. The program stayed connected with the high school sphere during the pandemic, and was able to hold both in-person and virtual player camps while adhering to all safety guidelines.

“There’s growth in high school girls’ rugby in the Carolinas, so there’s more opportunity here,” Wurst added. “It’s interesting because our growth as a program has also stimulated quite a bit of growth in the high schools, so it’s worked together. I like that part, it’s kind of growing the game across all fronts. … It’s just being active in the community, hosting coaching courses, getting engaged in everything we can to try to grow the game. That really helps create recognition and people know who you are.” 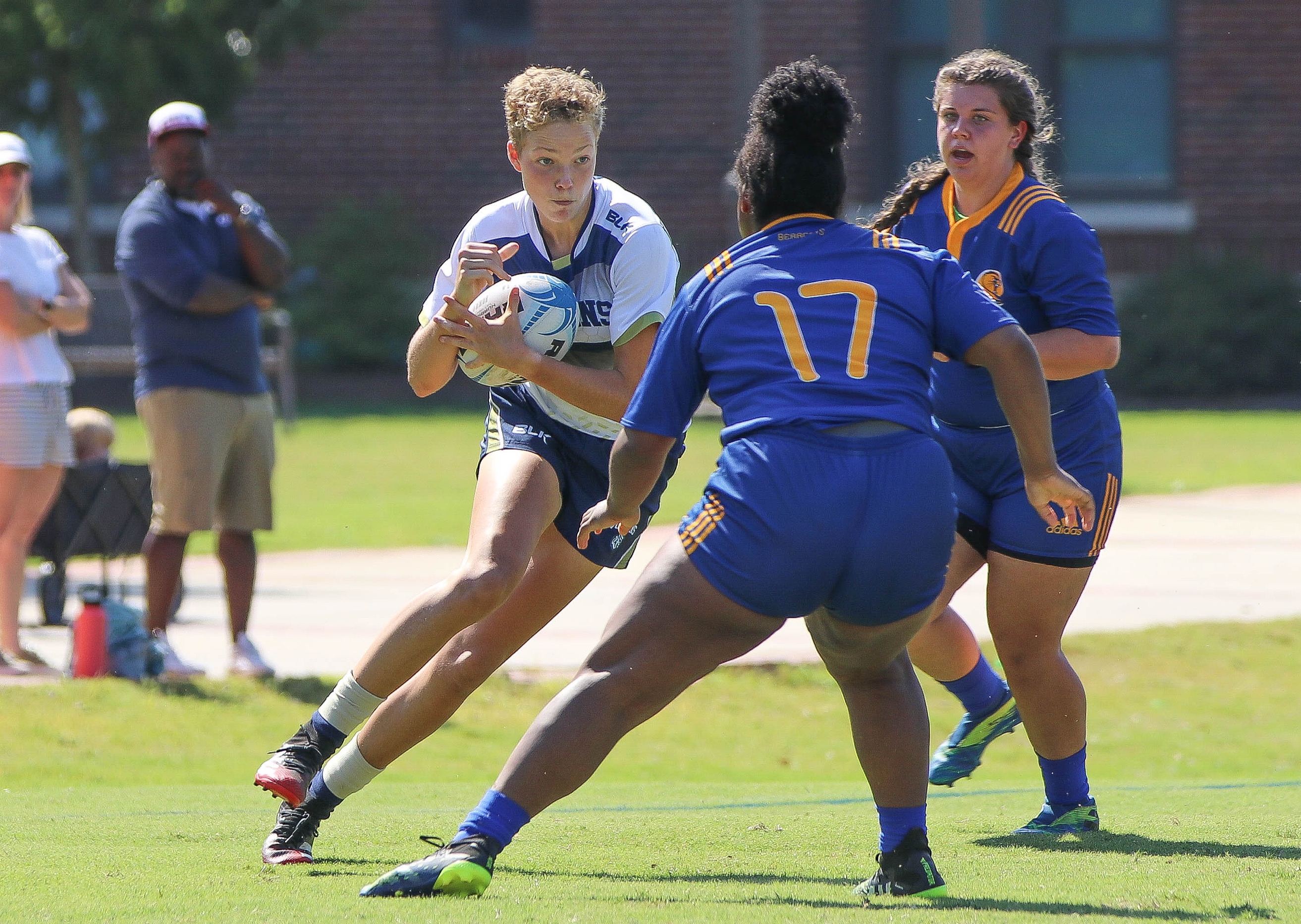 As the recruitment took off, the program expanded its official leadership roles. Senior Teaghan Steele has returned as team captain, and she’s supported by vice captain Jenna Klenz (jr.). They delegate duties to backs captain Alle English (jr.) and forwards captain Hailey Thomas (sr.). Senior Sara Linton is the Diversity, Equity & Inclusion rep, and sophomores Avery Kemora and Shelby Tippin are also stepping up as Student Advisory Council reps. They are the face of women’s rugby in the athletics department and their exposure to that side of the game will serve as a natural runway to future leadership roles with the team.

“When we started the program, it was a very young team with a couple of transfer students and a lot of very young players,” Wurst reflected. “And now we have some great upperclassmen who have been here and know what it’s like to be a student-athlete, mixed in with a number of really talented, with a lot of experience, underclassmen. I have to give a lot of credit to our team leaders. They set the tone for a lot of the things we do. We make a lot of decisions with their guidance in terms of what is going to work well for the team.” 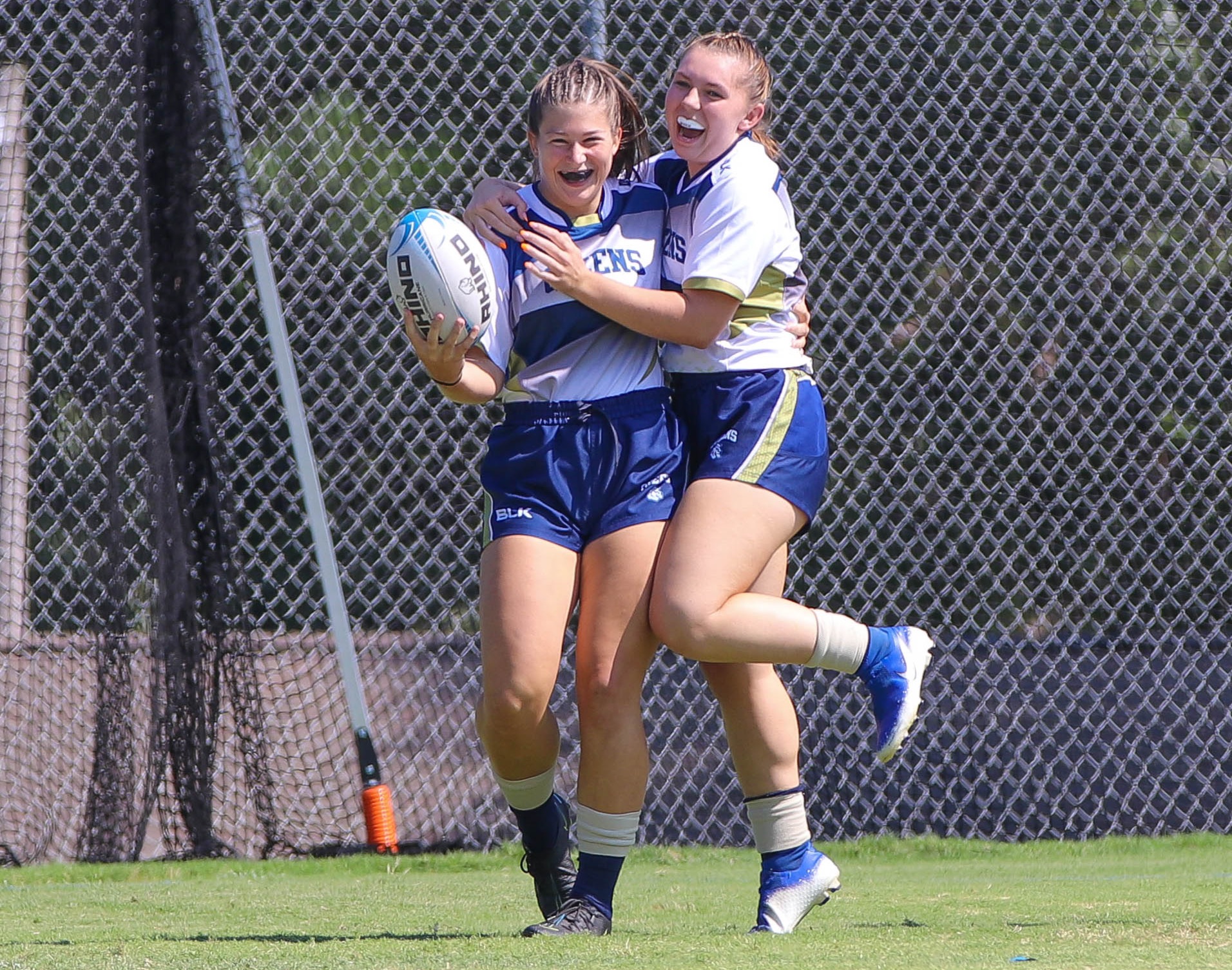 In preparing the fall 2021 schedule, Wurst was mindful of the fact that many players had not played rugby in a while. So the coach lined up local colleges, military academies and clubs that would support a proper return-to-play.

“We’ve been trying to make sure everyone with the roster gets the chance to play in a high-pressure situation to build depth and to test the depth of the roster, because that’s how we make sure we do well and finish the season in a good place,” Wurst said.

“We came off a great contest against Virginia Tech. I love that we have them as a geographically close competitor,” said Wurst, who noted a slew of 7s match-ups between the two teams but no 15s games prior to Oct. 2. “Credit to the athletes we have who were really excited and motivated to play a great opponent.”

Saturday’s contest resulted in an 82-0 win. 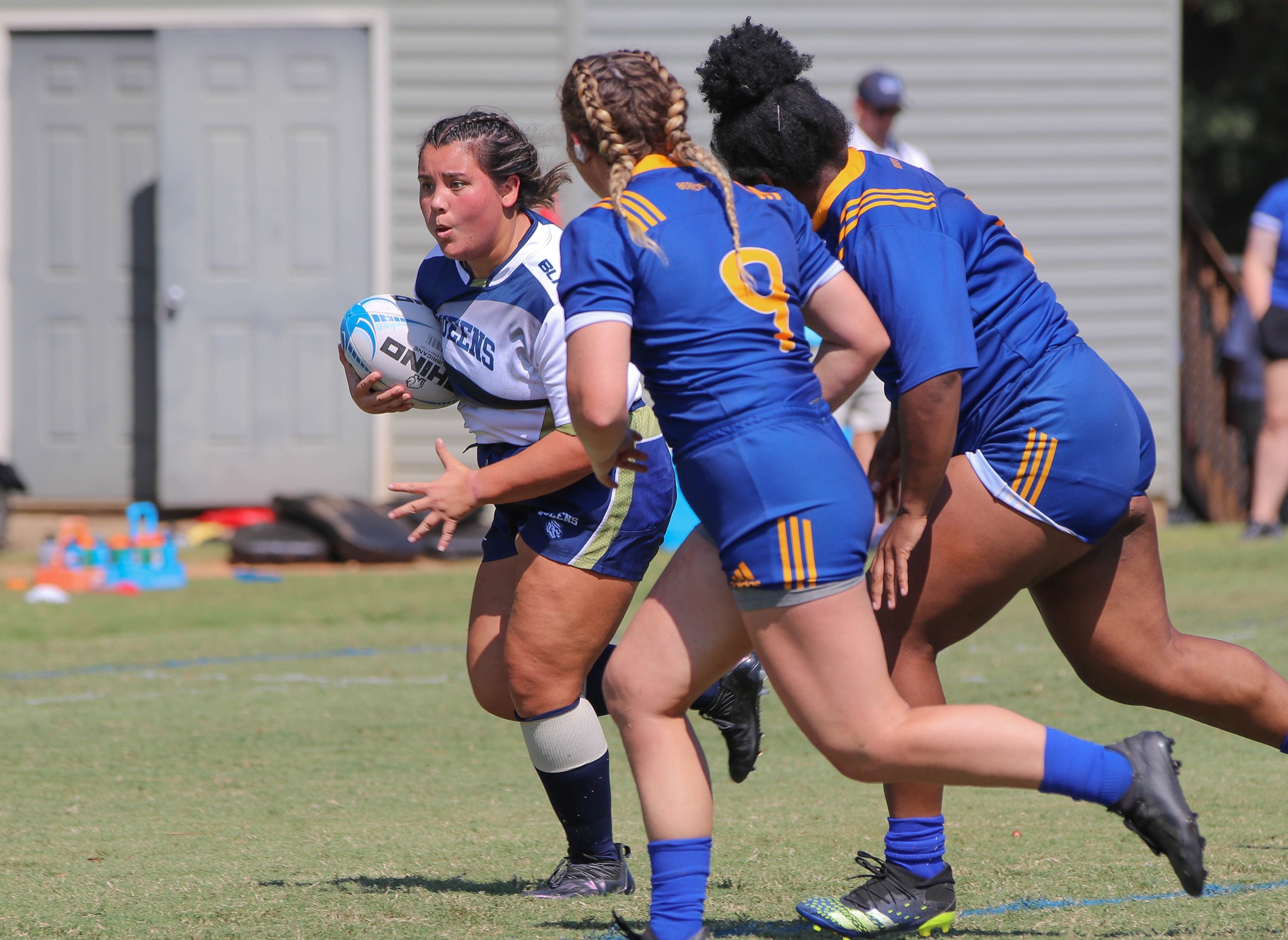 “Virginia Tech did a great job of, ‘Hey, let’s do a social,’ and everything else. They made dinner for us,” the coach continued. “I really love to see the best parts of rugby – the social atmosphere. Just because you are an NCAA program doesn’t mean you can’t do those things. Some of the joyful parts of rugby, that’s something NCAA athletics can learn from us. That was something that both sets of athletes were thrilled to do. Their leadership group and their organization, they operate in a way that is totally professional, and they do it as college students. And I just have to give tons of credit for that.” 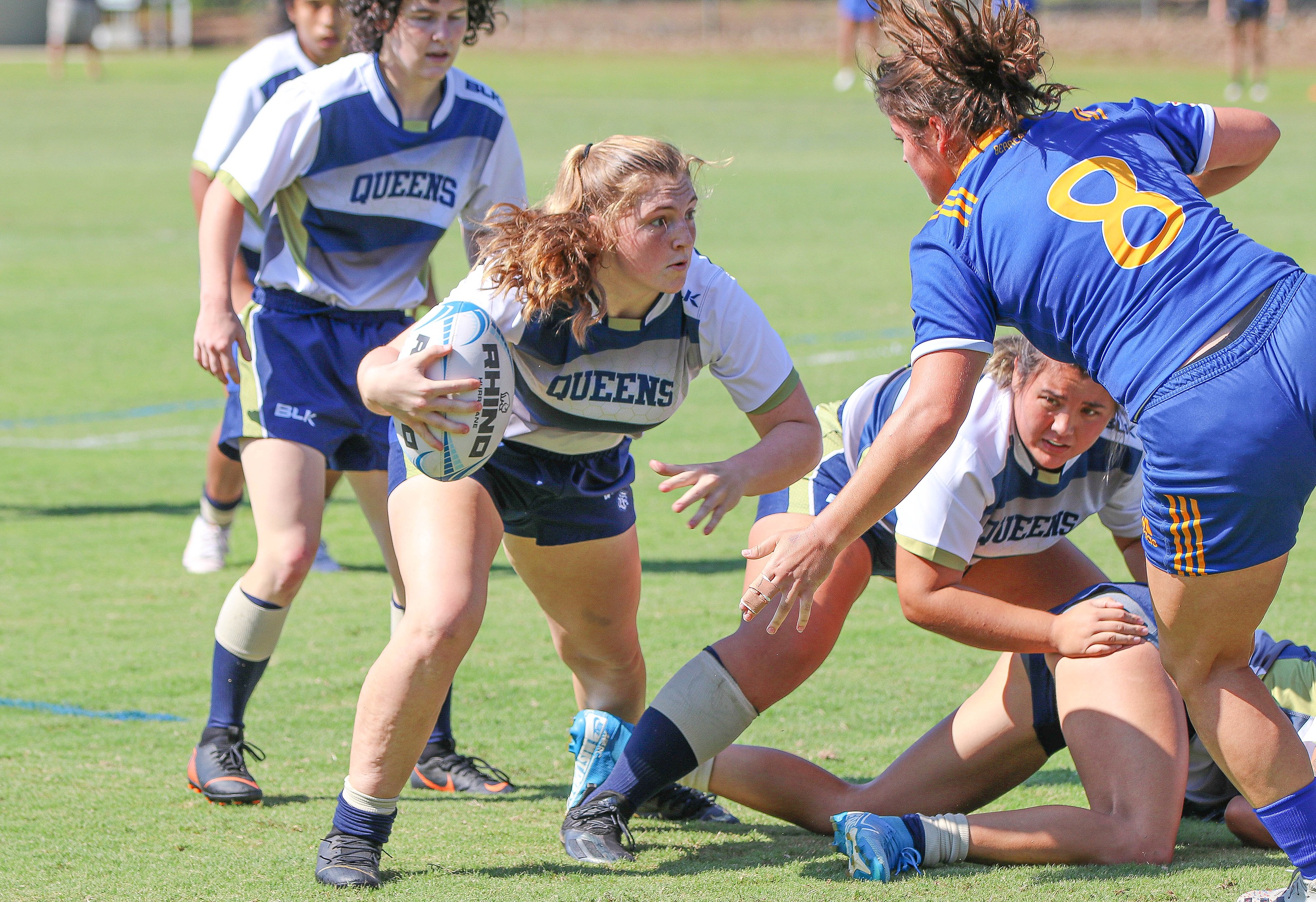 “Look at the score sheets. It’s multiple threats,” Wurst said of standouts. “We have strong leadership that is welcoming new, talented individuals. And that can be a challenge for some teams where you have young people who are very talented. How does that blend. It’s a credit to teammates who have been here for a while to say, ‘We’re glad they’re on OUR team.’”

The team is enjoying fall break right now and will return to campus next week refreshed and focused. On Oct. 16, Mount St. Mary’s will host a festival-like day for four NIRA teams. The Mount will play fellow DI Sacred Heart in their conference game, and Queens and American Internati
onal College will contest their first official DII conference match against each other. The third match will pit the Mount’s and Royals’ second sides against each other. The duo actually played a 15s game against each other at the end of the 2021 spring season, and Queens won that game 21-17. 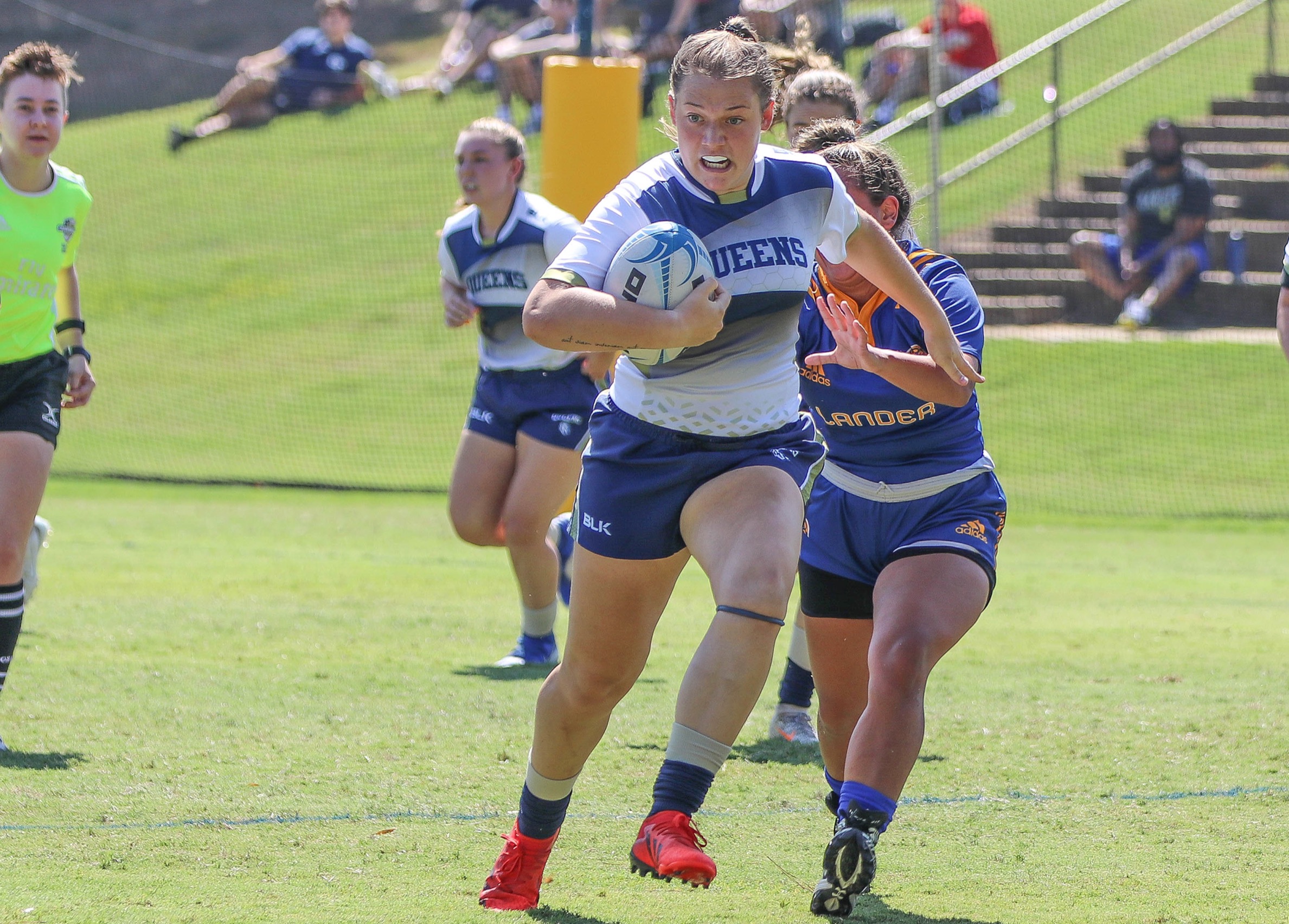 “I think they’re really excited. It’s going to be a great road trip where they know two great contests await,” said Wurst said. “We have had some amazing competitors and some amazing matches so far, and we just keep building, which is a lot of fun and what every coach wants. They know the competition is going to continue to get more and more challenging, and that’s what they want to have.”

A truly unknown awaits on Oct. 23, when the University of Northern Iowa (NCR DI), Denison University (NCR Small College) and East Carolina University (CRAA DI) travel to Charlotte. Fifteens and 7s will be played and afford a lot of playing options. The regular season will end with West Chester University, the reigning NIRA DII National Champion, on Oct. 30, and that game will occur at Philippi, W. Va. The NIRA semifinals follow on Nov. 13 and the national championships occur Nov. 20. 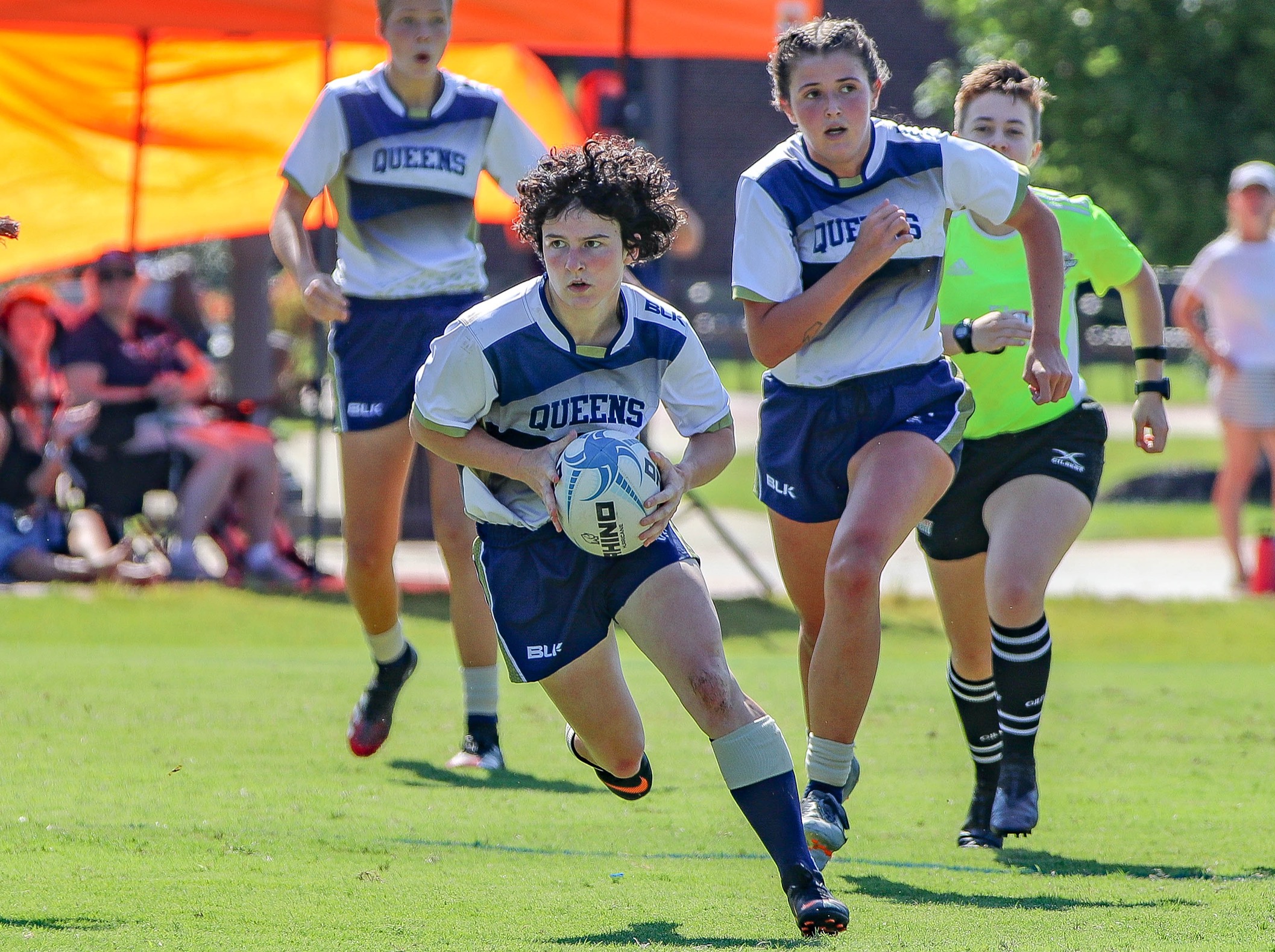 Queens is the juggernaut in the southeast corner of the nation, and it’s an area that is adding teams to the NIRA movement. Newberry College (S.C.) just announced women’s rugby as a new varsity sport for fall 2022, and the Wolves compete in Queens’ NCAA conference, the South Atlantic.

“It’s really incredible to have that step forward with these new programs in our region wanting to be a part of it,” Wurst hinted at more announcements to come. “When they’re around campus and talking to lacrosse or volleyball or anyone else, it’s, ‘How are we doing in the South Atlantic Conference?’ It’s exciting for our student-athletes that we’re moving in that direction. It moves us more toward mainstream NCAA athletics in creating those opportunities, which is really fun. And it’s building more of the Southeast footprint, which is super exciting, too.”