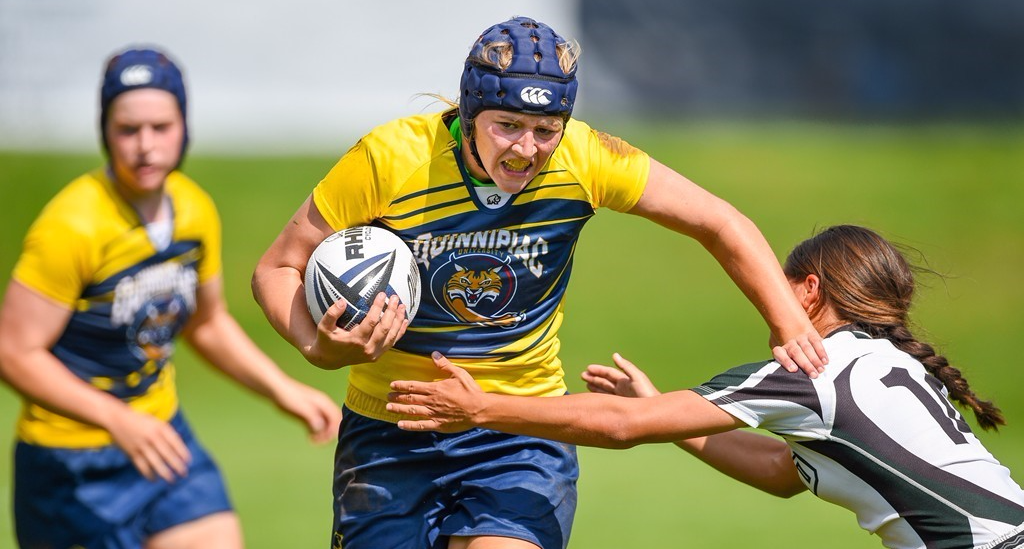 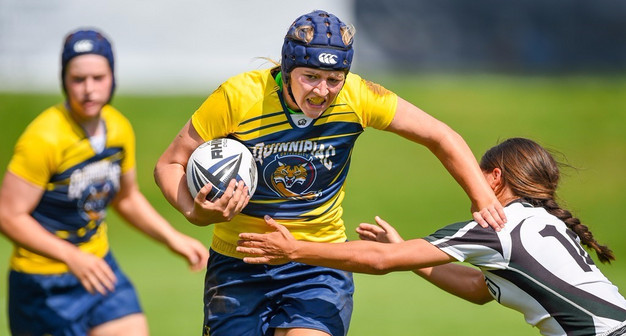 It was a thrilling day in Hamden, Conn., as eight DI sides convened for the first stop on the NCAA Varsity 7s series. After pool play and the semifinals, it was only Quinnipiac and American International College that remained undefeated, and a fantastic final followed. After a lead exchange, the host pulled away in the final minute for a 17-14 victory, the Bobcats’ second tournament trophy in as many weeks.

“Although the day was windy and rainy, the NCAA athletes of the seven teams in attendance exhibited an amazing level of resilience,” reported Quinnipiac coach Becky Carlson. “The weather was a bit of an equalizer for the teams. Some of the faster teams had to adjust to the soupy conditions. The dark horse of the tournament had to be Harvard.”

During pool play, Quinnipiac outscored West Chester, Dartmouth and Norwich A 64-12, with the latter giving the host a good 15-7 game. AIC topped Harvard, Norwich B and Army 82-12, getting the best game out of Harvard, 10-7. Norwich A and Harvard advanced to the Cup semifinals but were outmatched. Quinnipiac beat Harvard 29-5, and AIC bettered Norwich A 25-5.

“We watched AIC all day prior to the final, and it was clear their speed, quickness and relentless pursuit of possession were all dangerous weapons,” Carlson acknowledged.

Quinnipiac was also aware of weapons like Anne-Laurence Harvey, an MA Sorensen Award nominee, who by day’s end scored eight tries and kicked eight conversions for 56 points. Sister Elizabeth Harvey was right behind her and accounted for seven tries. Shamira Robles dotted down three, and try-scorer Kayla Clark also impressed on the day.

The Bobcats spread out their scoring a bit more, seeing players like Hailey Wyatt, Jennifer Fremd, Taylor Schussler, Jessica Maricich, Flora Poole and Mason Johnson taking turns in the try zone. But the squad was led by Ilona Maher and Rebecca Haight, who combined for 10 tries throughout the tournament.

Quinnipiac’s leading scorers gave the home side an early 10-point lead in the final against AIC. Maher scored in the opening 30 seconds, and then Poole put Haight into space for a 40-meter score. As the half wound down, AIC’s Robles dotted down and the conversion closed the gap to 10-7, Quinnipiac.

AIC scored another converted try to put Quinnipiac at a 14-10 deficit, but in the final minute of play, freshman Emily Roskopf tore down the sideline for the try and go-ahead points. Maggie Myles added the extras for the 17-14 victory.

“The final was about as exciting as it gets,” Carlson enthused. “We are looking forward to seeing everyone next weekend because the all-NCAA series only gets better from here.”

The field will reconvene this Saturday, April 9 in Providence, R.I., as host Brown University joins the competition after a spring break tour abroad.