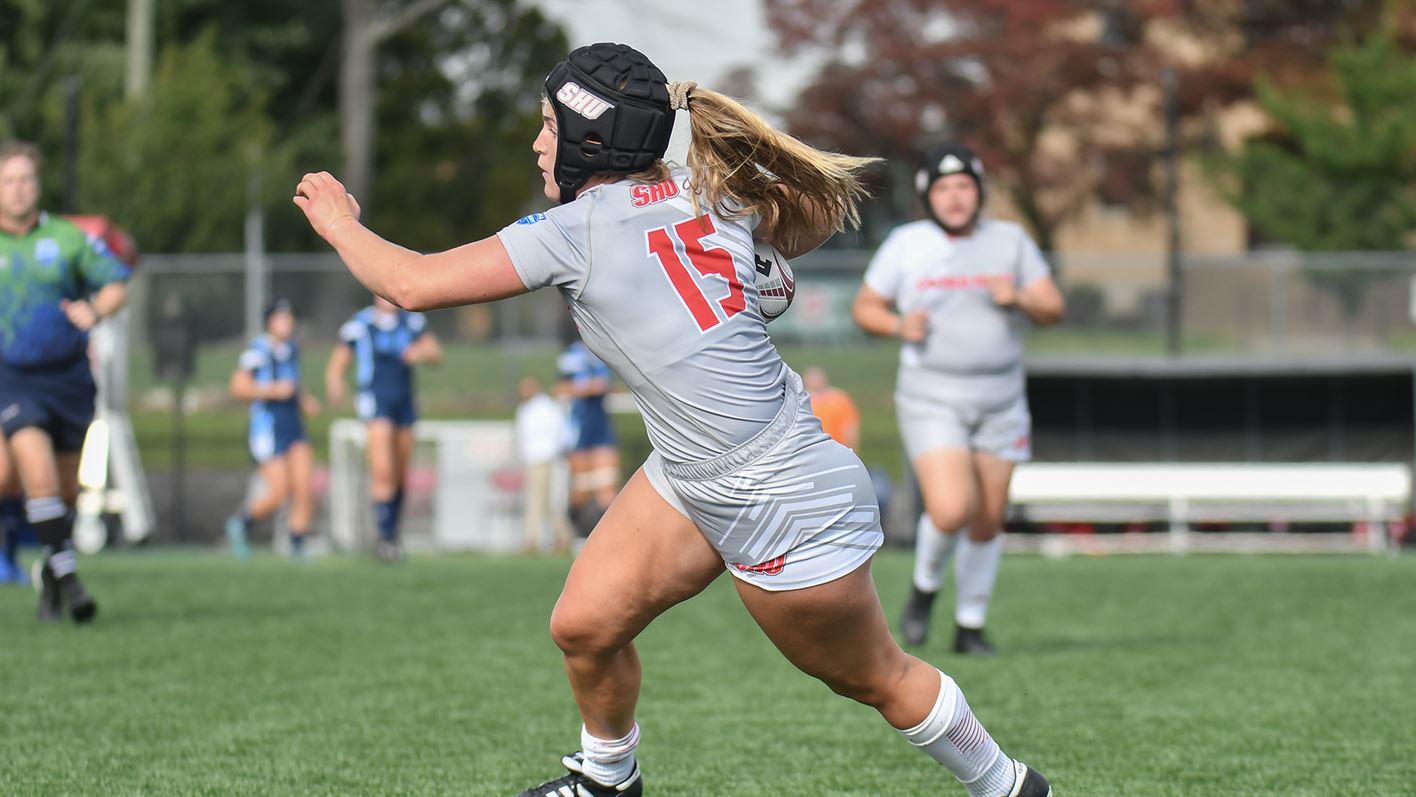 Sacred Heart University won its first game of the 2021 DI National Intercollegiate Rugby Association (NIRA) season, and it was the culmination of a lot of hard work, adjustments and belief. The Pioneers traveled to Emmitsburg, Md., to face Mount St. Mary’s and returned to Connecticut with a 22-20 victory. Army and Long Island remain on Sacred Heart’s DI schedule.

Sacred Heart knew that fall 2021 was going to be a season of adjustments. There was a staffing change, as former assistant coach Jenn Salomon, who had been with the team for six years, left to pursue playing opportunities with the Mexico 7s National Team and London Irish. Sacred Heart head coach Michelle Reed hired Salvatore Tondi as a replacement.

“We were sad to see Jenn go but Sal has come in and put his own footprint on the program already,” Reed said. “We have a really good chemistry and work well together, and I know the team really likes him. As a head coach, you’re always worried how transitions like that will go, but it’s been smooth and he’s been a real blessing for our program.”

Recruiting was tough during the pandemic, as Sacred Heart traditionally hits the high school tournament circuit to identify talent and build relationships in person. There was none of that in 2020-21, but the Pioneers did land two important first-years: Aly Cunningham from Catholic Memorial High in Waukesha, Wisc., and transfer student Fabiola Millien-Faustin, who comes in as a sophomore 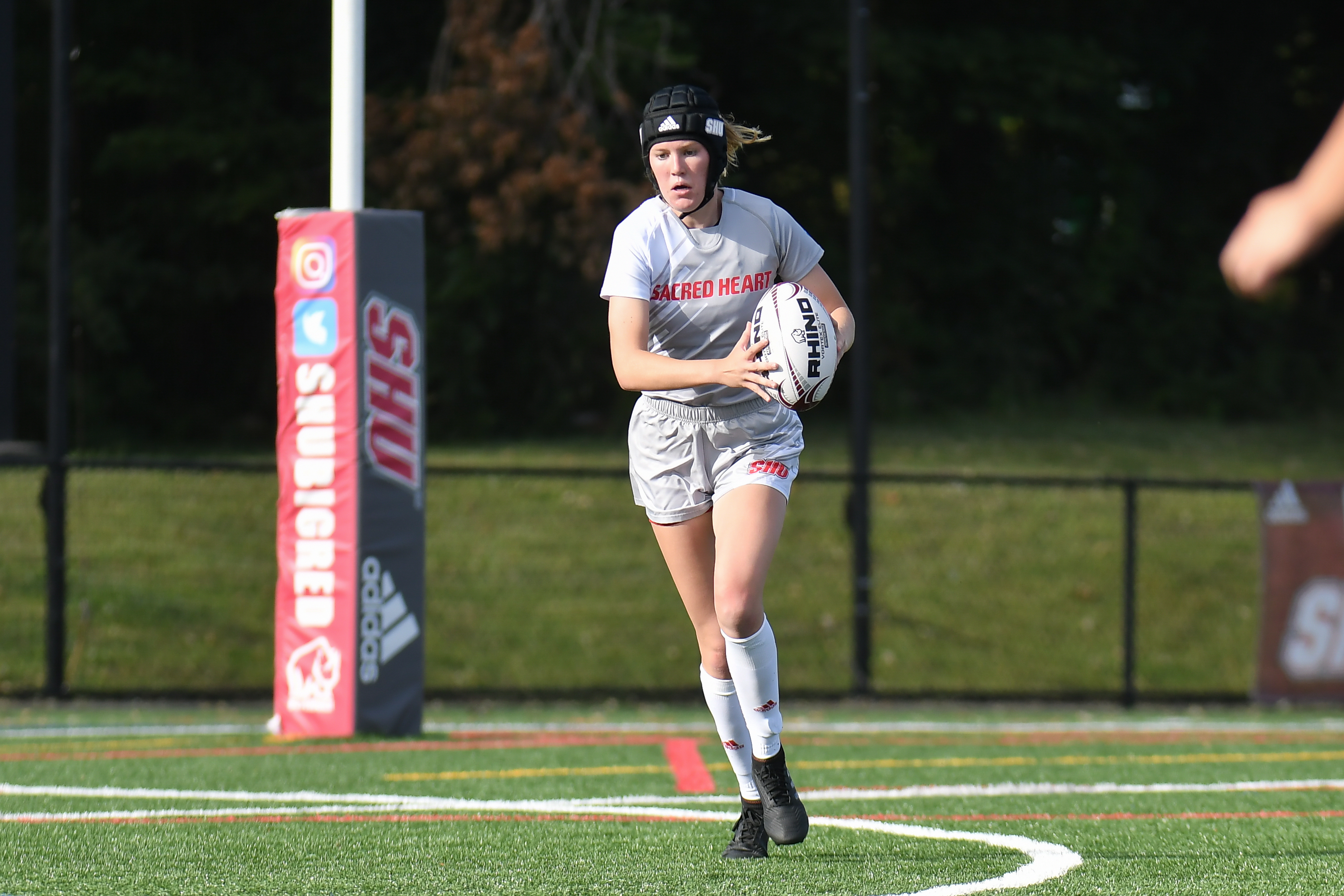 “They have both brought an intensity to the game that we had been seeking,” Reed said. “It’s been a really easy transition. They are great people, not just rugby players, and the team has brought them in and accepted them.

“We’re still wearing masks and dealing with policies, but the fact that we can practice together and travel and have locker-room usage and team bonding, it’s been a huge change,” the coach added. “It’s helped the incoming freshmen and also the freshmen from last year who didn’t have a freshmen year at all. This is a real year for them to bond with their teammates.”

Fall 2021 also marked the first year in which the team named captains. Reed had been waiting for the program to reach a certain stage of maturity, and after a proper application and interview process, Jasmin Quinones (Grandville, Mich.) and Stephanie Wilson (Catholic Memorial, Wis.) were selected to lead the squad. They had a hefty task at hand, as this season also marked the first time the team had an all-DI schedule.

“We knew it was going to be challenging,” Reed said. “Against Quinnipiac, the first game, we saw really great spurts of team play and realized, especially after watching film, that we should be at this level. We just needed to improve some things.” 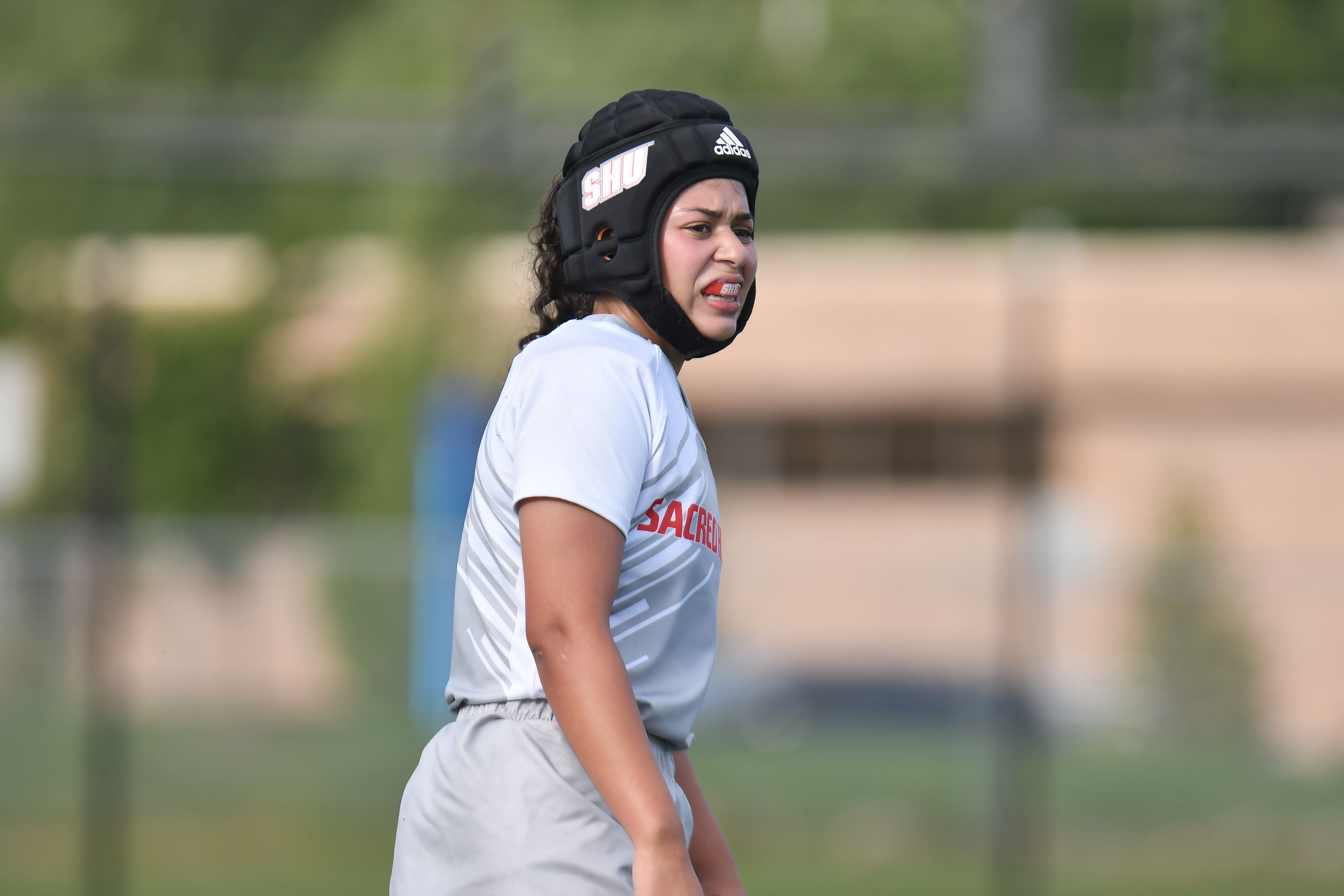 Sacred Heart lost its opener 48-24 but ended up outscoring Quinnipiac 21-17 in the second half. That good momentum was challenged in game two against Brown.

“Brown was disappointing,” Reed said of the 46-3 loss. “Our performance was not where it should have been.”

Reed noted some officiating issues in that match – but not as a factor in the loss – and had the opportunity to address them through the league’s use of the Advantage Sports Software.

“I’ve enjoyed having Advantage referees and working with Rich Every to help refs, especially with the ref shortage,” said Reed, who is also the NIRA DI commissioner. “It gives coaches the opportunity to see how the refs are reffing the game, what they’re looking at, how they interpret the laws. And we have a platform to voice concerns, give our opinions on how the game went, and what we saw. It’s been really helpful for the league to have that ability to meet every Wednesday, see clips and talk about it. It’s making coaches and refs better.”

The Brown game brought about a shift, and the team started focusing on incremental improvements every week.

“We came out hard against Harvard and were ready to play,” Reed said of the week three showdown. “The score [53-0] might suggest something else, but talking to [Harvard head coach] Mel [Denham], and even between the players, they said it was the best defense they faced all season. 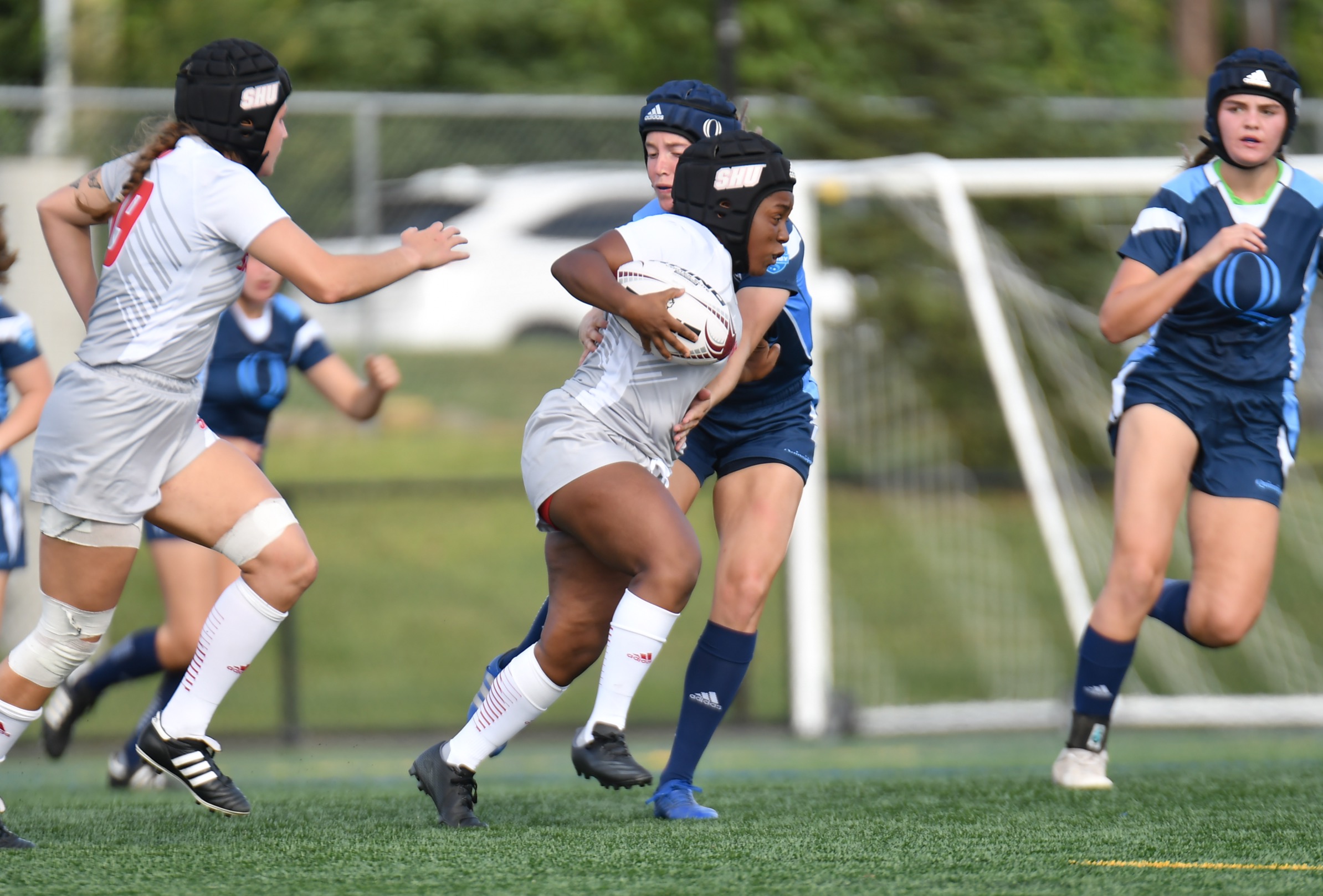 “The team was coming together more and getting more resilient each game,” the coach added. “They set goals around line-breaks and positive tackles and not letting the opposition score in the last 10 minutes, and those more attainable goals build confidence.”

Dartmouth followed in round four, and it was another tough one – 63-10 loss – but there were still positives to be gleaned.

“The last 10 minutes against Dartmouth, coach Sal and I told the team, ‘We saw you play with passion and fire and aggression. You never gave up and we need to see that next game. We saw it, and you can’t take it back now,’” Reed said.

“The biggest thing is belief,” the coach continued. “You see big names and national players that you’re going to play against, and the belief in yourself can be a struggle. The last 10 minutes against Dartmouth, especially when we were watching the film the next day, the players realized, ‘This is what we can do. This is who we are and so we need to do it.’ In practice they were holding each other to a higher standard. ‘We can stiff-arm and run through and make those tackles.’ And it’s validation that all the work they were doing does pay off.”

Last weekend, Sacred Heart traveled to Mount St. Mary’s for its fifth league game. Queens University of Charlotte and American International College were also on campus contesting their DII conference match at a neutral location (Queens won 36-5). The two DI teams had had similar experiences throughout the season; however, the Mount had already won its first game of the fall: a 45-15 victory against Long Island

“Mount is always a rival,” Reed said. “You know it’s always going to be an intense, competitive game, because we’re at the same level and it’s a chance for either of us to win. For the team, they said their goals were to win, but also to score first and score last. They wanted 10 positive tackles and 15 line-breaks. And in this game, especially, it was, ‘Stop looking across the field at the other team’s jerseys, and look side to side at the jerseys next to you.’”

Sacred Heart achieved one of its goals early on, as Cunningham scored the game-opening try and conversion approximately six minutes after kickoff.

“We spent a year-and-a-half recruiting Cunningham,” Reed said of the freshman. “She knew Stephanie Wilson from Catholic Memorial, and Makinzie Youngblood from Wisconsin [DSHA], so it was nice for her to know people who were also top performers on our team. She’s so coachable and always wants to do more – film, training outside of practice. She’s very motivated but also wants to have fun, and I like that she has that balance. Her kicking game is phenomenal and we’ll keep helping her improve, but she does a lot of that work on her own. She told me, ‘We have other things to work on as a team, but we’ll do that outside of practice.’ You appreciate that because you only have so much time with them.”

The home side then surged to overtake the lead, as Jade Garcia and Veronica Blair scored tries, and Maya Grassi kicked a conversion and penalty kick. Mount led 15-7 at the break.

“We’ve really learned in the last two games how to forgive each other,” Reed said. “A teammate made a mistake and at the next kickoff, it was, ‘Flush it, we forgive you, let’s go.’ That note of trust and belief in each other, that really helped us.”

In the second half, junior Samantha Carroll scored her first-ever try for Sacred Heart, closing the Mount lead to 15-12. Scrumhalf Grassi then restored the point differential by diving on a loose ball in the try zone: 20-12 to the Mount.

“We knew we still had time to win, and we showed good resilience and that bounce-back when we were playing down,” Reed said. “They dug deep in the last 10 minutes, but they also played smarter. They’ve been watching film and asking good questions, and their rugby IQ is higher. They’re figuring out which plays to call, how to hold onto the ball when you need to run out the clock. It was nice to see that flow for them.”

When there was an opportunity to go for points, Sacred Heart pointed to Cunningham and the tee. If the freshman made the kick, then the team would only need a try to tie and a conversion to win. 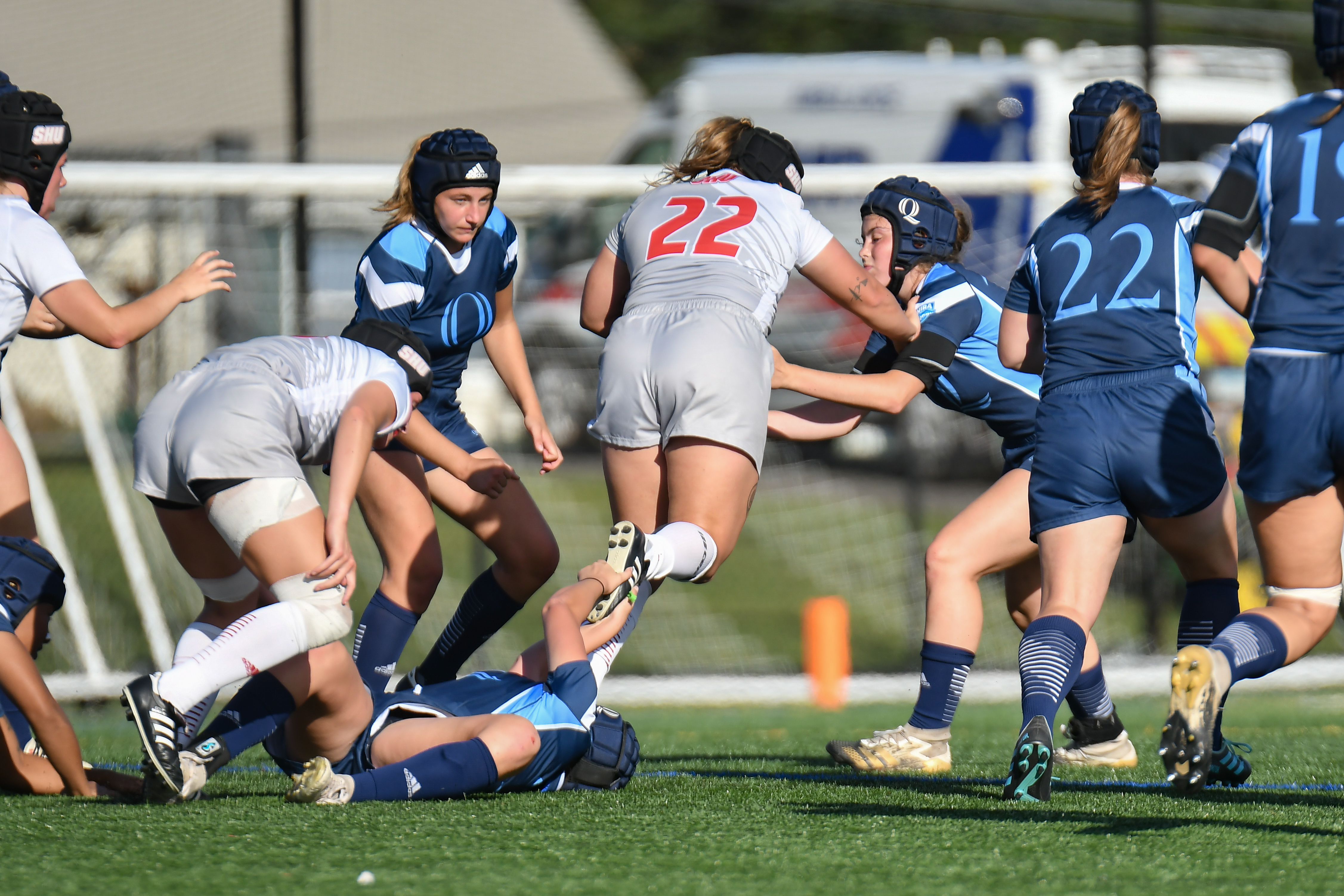 “In pressure situations, top performers were Aly, when kicking,” Reed said. “When we need her to hit the post and make conversions, she comes across. Top notch. Youngblood was fantastic against Mount. She was making her tackles and breaking the line. Wilson, too, I trust her. We moved her from center to flanker, and she puts great defensive pressure off the scrums, makes positive tackles and hard hits and line-breaks. Those three stood out in in this game. You see the confidence coming through in everyone, but when it comes to pressure situations, Wisconsin does a really good job bringing good high school rugby to the table, and so those players have a background [in high stakes games] and transition well to us.”

Cunningham slotted three points, and Mount held a 20-15 lead until two minutes before the final whistle. That’s when Youngblood crossed for the final try, and Cunningham hit the extras for the 22-20 lead that held through regulation.

“The number-one thing is confidence,” Reed said of the game’s impact. “Knowing we do have the ability and athletic skills to perform at this level. The next thing it does, and I’ve seen it, is there’s a belief in what we’re doing as a program – not just the wins and playing at that level, but the actual development of the game itself. … The win really exemplifies the values and morals we hold as a program. It’s the base of our success, they’re seeing that and verbalizing that and enjoying that. They want to leave a legacy with this program.”

Army is up next, and Sacred Heart will travel to West Point, N.Y., for the Sunday, Oct. 24 fixture.

“Same as Mount – very physical, up in your face, aggressive rugby,” Reed said of expectations against the Black Knights. “Going back to what the Mount win does for the team, we have confidence that we can compete against Army. I’m not necessarily saying that it’s a guarantee or that we think we’ll dominate or win, but we know what this aggression looks like and can play toward that and not give up.”

The Oct. 30 match against Long Island is supposed to be Senior Day at home, but there’s question as to whether the Sharks will be able to honor that fixture. According to Army, LIU only had eight players available for its canceled game against the Black Knights last weekend. If that game falls through, then Reed is looking for a replacement game the first weekend in November.

The DI semifinals are not yet set, but odds are that 5-0 Harvard and Dartmouth, which play each other this weekend, Army and Brown will advance to the post-season.