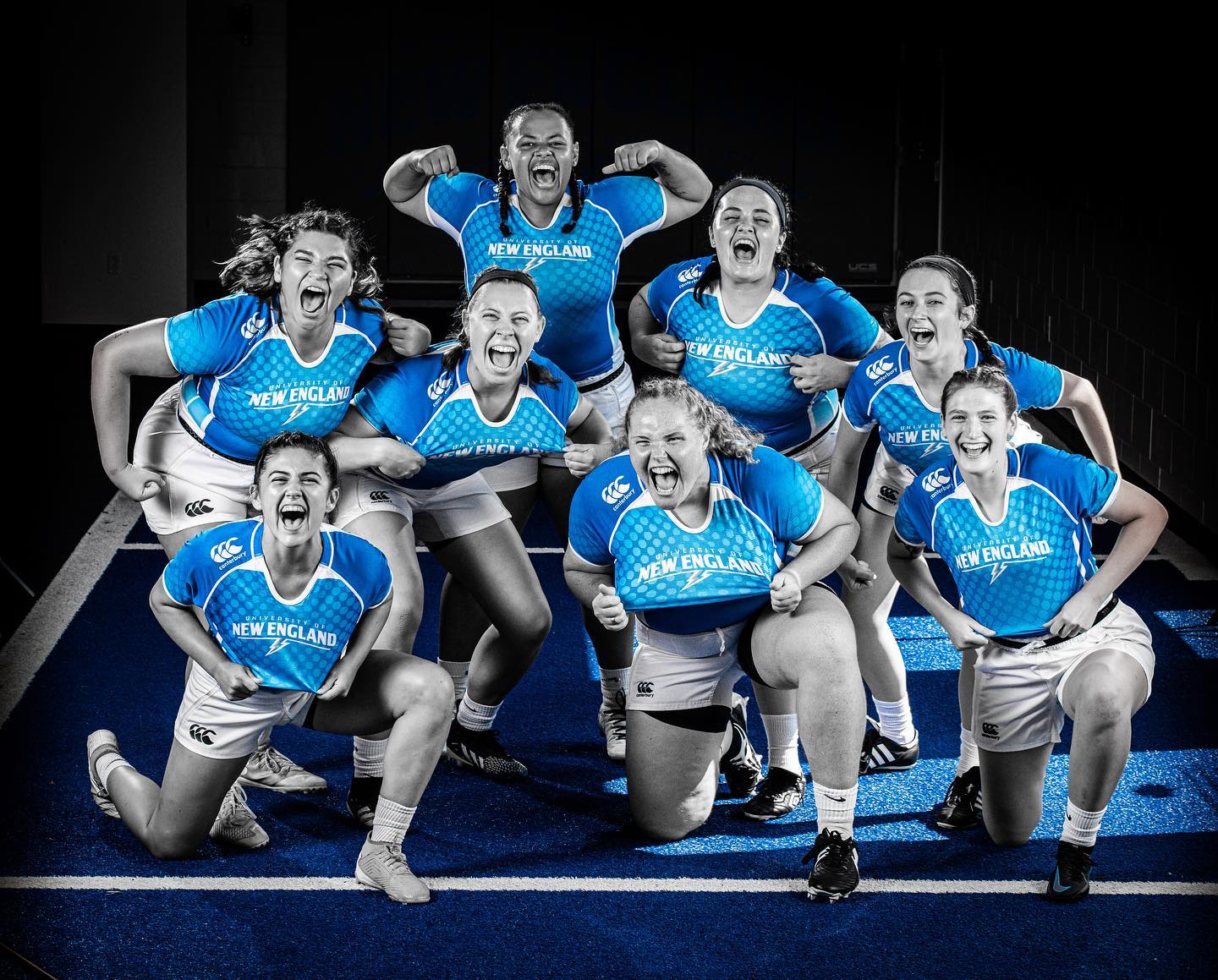 The University of New England (UNE) featured in the 2019 National Intercollegiate Rugby Association (NIRA) DIII National Championship, and the Nor’easters are currently seeded second in the standings this fall. The Biddeford, Maine, program is 2-1 in conference play, although its fall schedule has included many other fixtures to work its depth.

UNE was able to train three times per week in fall 2020, but the squad was divided into two groups that did not overlap, and everything was social distant. Late in 2020, restrictions loosened, limited contact was reintroduced, and the year ended with a Blue vs. White scrimmage. Spring 2021 was much of the same, but the team was able to progress to contact more quickly, again ending the season with an internal scrimmage.

“Knowing what other teams have, we’re in a great place,” UNE head coach Ashley Potvin-Fulford said of stability. “We are really fortunate to have the numbers we have, but in reality, our seniors don’t have the amount of playing experience as traditional seniors in a college setting. So in terms of goals this year, it’s: Put a viable team on the field, build through the season, and be competitive.”

A strong senior class leads the way. Alyssa Ehrenfried is the No. 8 and was a 2019 All-NIRA DIII selection as a prop. The senior is solid, crucial to the set piece and very good in open play. Fellow loose forward Emily Ramsey brings a lot of tenacity to the pitch and currently leads the team in tackles. They both work well with fellow senior Katie Berger at flyhalf. The pivotal player is all about hard work and has set the tone for the team, particularly in the weight room and strength and conditioning, which has greatly benefitted the team’s stamina.

There is a solid class of juniors, as well, lending support. Salma Bezzat was a 2019 All-NIRA DIII Honorable Mention and is learning the nuances of the front row. That said, the prop is continually “a force to be reckoned with,” per Potvin-Fulford. Delaney Hanson has really stepped up as a starter and is a strong ballcarrier in contact. And outside center Mackenzie Burke is actually in her first competitive season, having joined the team in spring 2020, which kicked off a year-and-a-half of Covid rugby. Burke has quickly become a major contributor on the pitch, leads the backs in tackles, and earned high praise from Potvin-Fulford for an influential turnover at the end of the Norwich game.

“The upperclassmen certainly feel or understand that, on the field, we are a young team,” Potvin-Fulford said. “But they’ve done a great job off the field in terms of heightening that rugby IQ and hitting the weight room more frequently, which has made us more durable.”

“It was the kind of match-up we had been expecting,” Potvin-Fulford said. “Norwich historically has been super physical and we knew that going in. We also knew that we like to play with a little more finesse, move the ball on all areas of the field, and all positions doing a lot of carrying. We knew it was going to be a battle of contrasting styles of play.”

Potvin-Fulford described a hard, back-and-forth match, but the home side surged early on. The coach called out Ehrenfried for two tries scored, as well as fellow try-scorer and senior Fiona Thomas, who has been a steady, effective ballcarrier all season. Junior Meg Smith, a first-year and starting wing, thrived in the high-stakes environment, slotting two of three conversions. Smith is speedy, has a good boot and is very important to the defense. In fact, Smith was responsible for a try-saving tackle that would have put Norwich in the lead.

The freshman recruits also performed well. Duchene is the starting fullback and confident in the open-field tackle, and Cogan is a solid, tough blindside flanker who punches up the defensive pressure. In the end, UNE was able to hold off a surging Norwich for a 19-15 win. The victory marked the team’s first-ever win against Norwich, Potvin-Fulford’s alma mater.

“The seniors knew and they were super hyped,” the coach said of whether players were aware of the win’s significance. “It was Senior Night as well as alumni weekend, so we had a packed house. It was a really nice to see the team perform well under that pressure in a super competitive match.”

The Norwich game capped the conference schedule, and now the team is focusing on building younger players’ game experience before playoffs begin. Last weekend, UNE won a pair of 7s matches against NIRA newcomer Univ. New Haven. Fortunately, UNE was able to replace the canceled Adrian College match (the Bulldogs have canceled all of their NIRA fixtures this fall) with a B side scrimmage against Bowdoin. The Oct. 30 rematch against Norwich is a friendly, and then playoffs begin Nov. 13. In all likelihood, that semifinal round will pair UNE and Norwich against each other, and Bowdoin against Colby-Sawyer.

“I always think it’s tough to see a team three times in the same season,” Potvin-Fulford looked toward the Norwich rematch. “We’ve done it before – in the 2019 season with Colby-Sawyer. Some pros: You’re familiarized with their style of play and know what to expect, but that’s also a con because the other team feels the same way. It will be a great match-up and will be more of the same – two contrasting styles of play.”

So far, UNE is meeting its goals of fielding a legitimate team and challenging fellow DIII programs.

“Our team culture and dynamic are fantastic this year. They’re very much acting in a ‘we before me’ way,” Potvin-Fulford said. “We’re really making sure that we have conversations that we’re doing things that are in the best interest of the team. In terms of observations on the competition, I do thing everyone feels a little young on the field this year – across divisions, across conferences – but the overall rugby has been tremendous.”