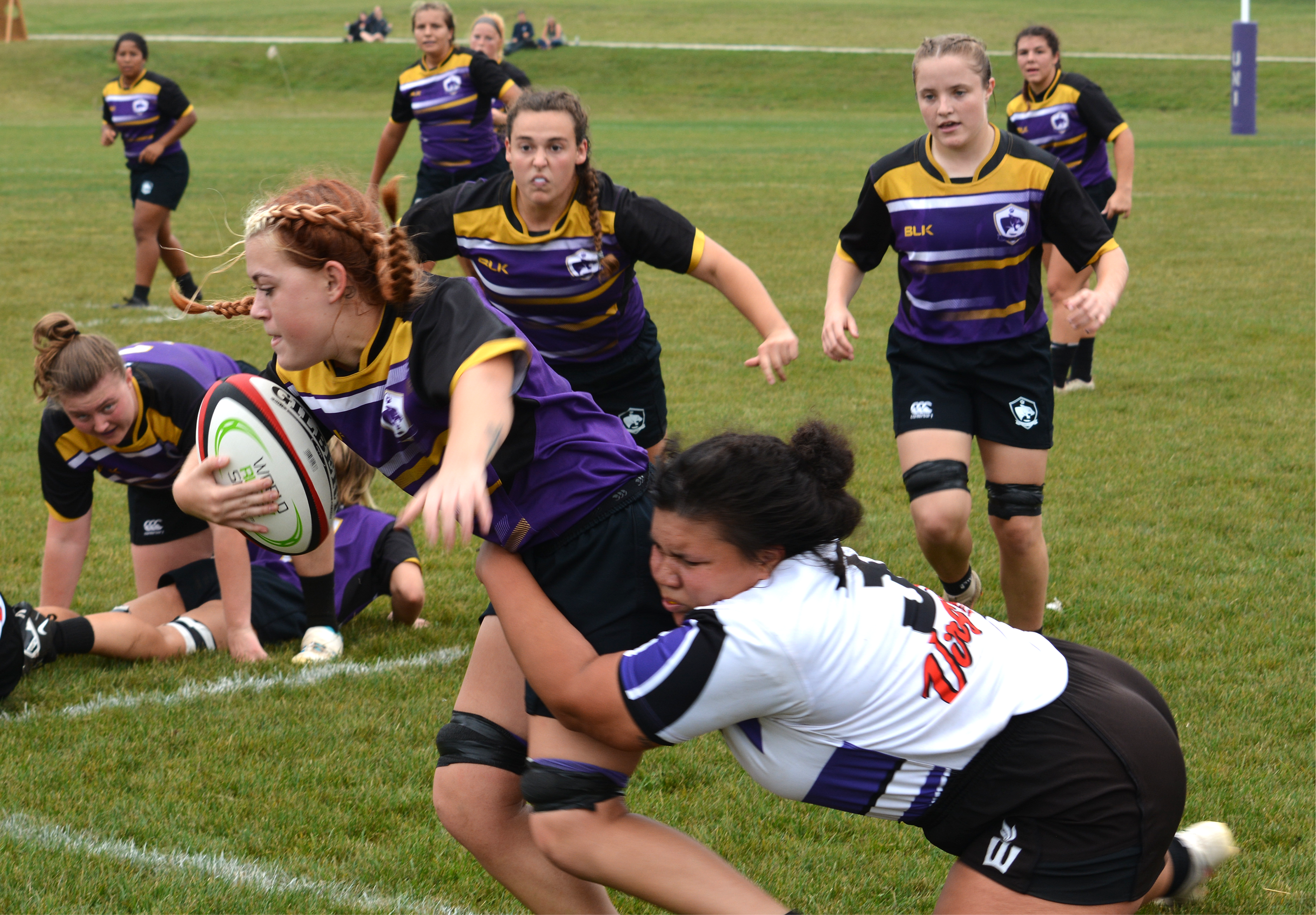 The University of Northern Iowa has won the DI Midwest conference and advances to the National Collegiate Rugby (NCR) post-season with a 4-0 record. For Panthers head coach Meghan Flanigan, this year’s team is reminiscent of UNI rugby in its heyday. Yes, the wins and on-field success are there, but it’s the family feel and joy that make the alumna nostalgic.

“That makes the past 5-6 years worth it,” Flanigan reflected on her tenure as head coach.

Many of those gains were in jeopardy, however, when Covid-19 suspended rugby activity. But that lull saw Flanigan and team launch into action.

“We knew that if we didn’t stay active, then we could lose the program and the team,” Flanigan said. “So we did anything and everything, from a virtual season, to volunteering, to making stuff up on our own, just to keep new players engaged. We had a big, good freshman class last year and I wanted to keep those players out, and we were fortunate that the university let us do non-contact practices starting in the fall [of 2020].” 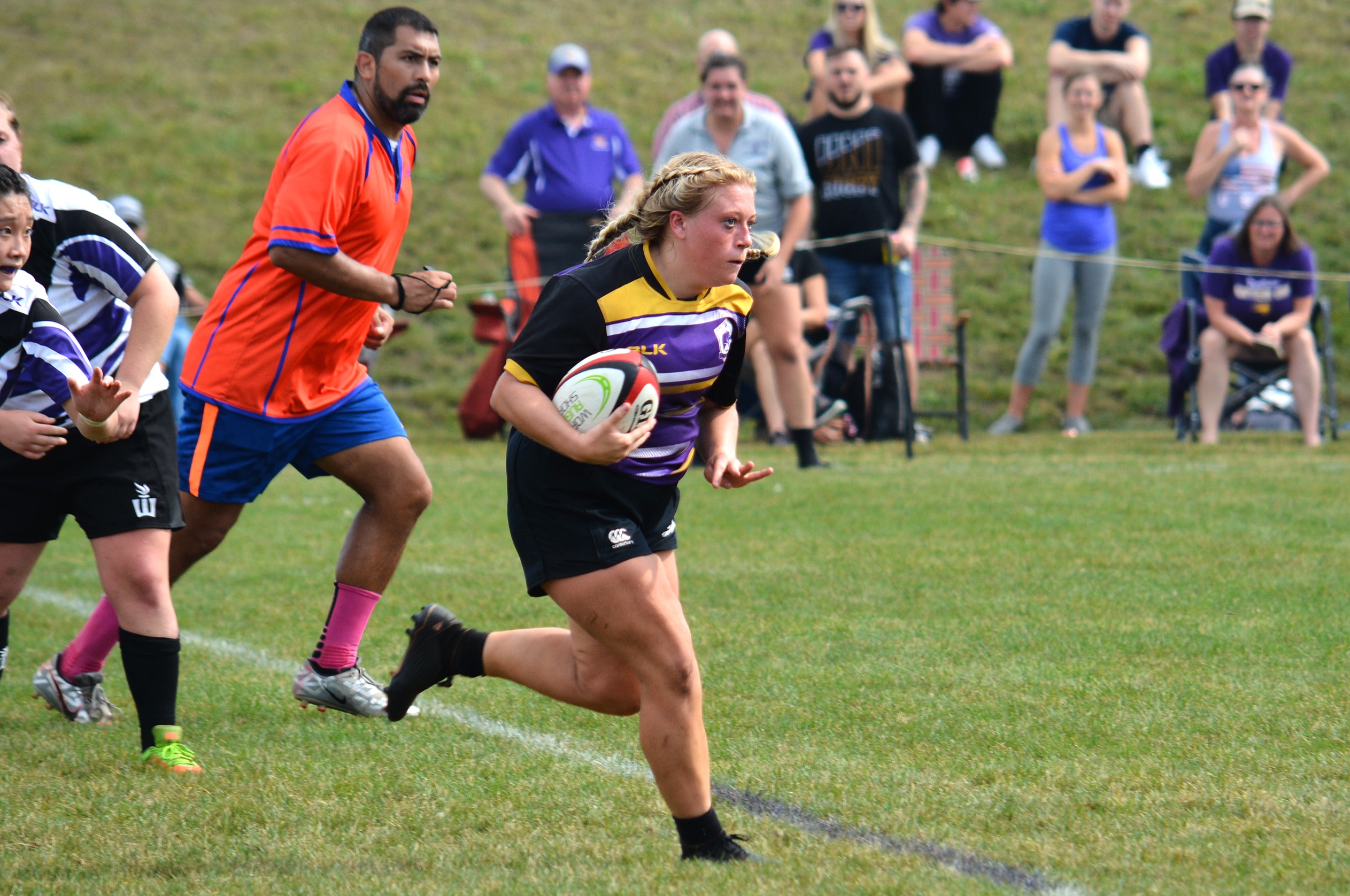 UNI and Iowa State were in similar situations, playing 7s in spring 2021 and competing at CRC 7s in New Orleans. Similarly, the Cyclones benefitted from an abbreviated season last year and currently sit in second place in the standings. Meanwhile, Minnesota, Winona State and Wisconsin were much more locked down.

“Our conference shows what can happen if a team stayed active and practiced, and what happens if they don’t,” Flanigan said. “And a lot of that was up to the universities and out of the teams’ hands. We were very fortunate in Iowa.”

Players were active in the summer, too, and former captain Lynn Kleyer and one of three current captains, Maggie Burns, played with the NCR All-Stars at the Falcon 7s.

“Their hard work and leadership trickled down through the team, and it allows people to fall in love with rugby in their own way,” Flanigan said. 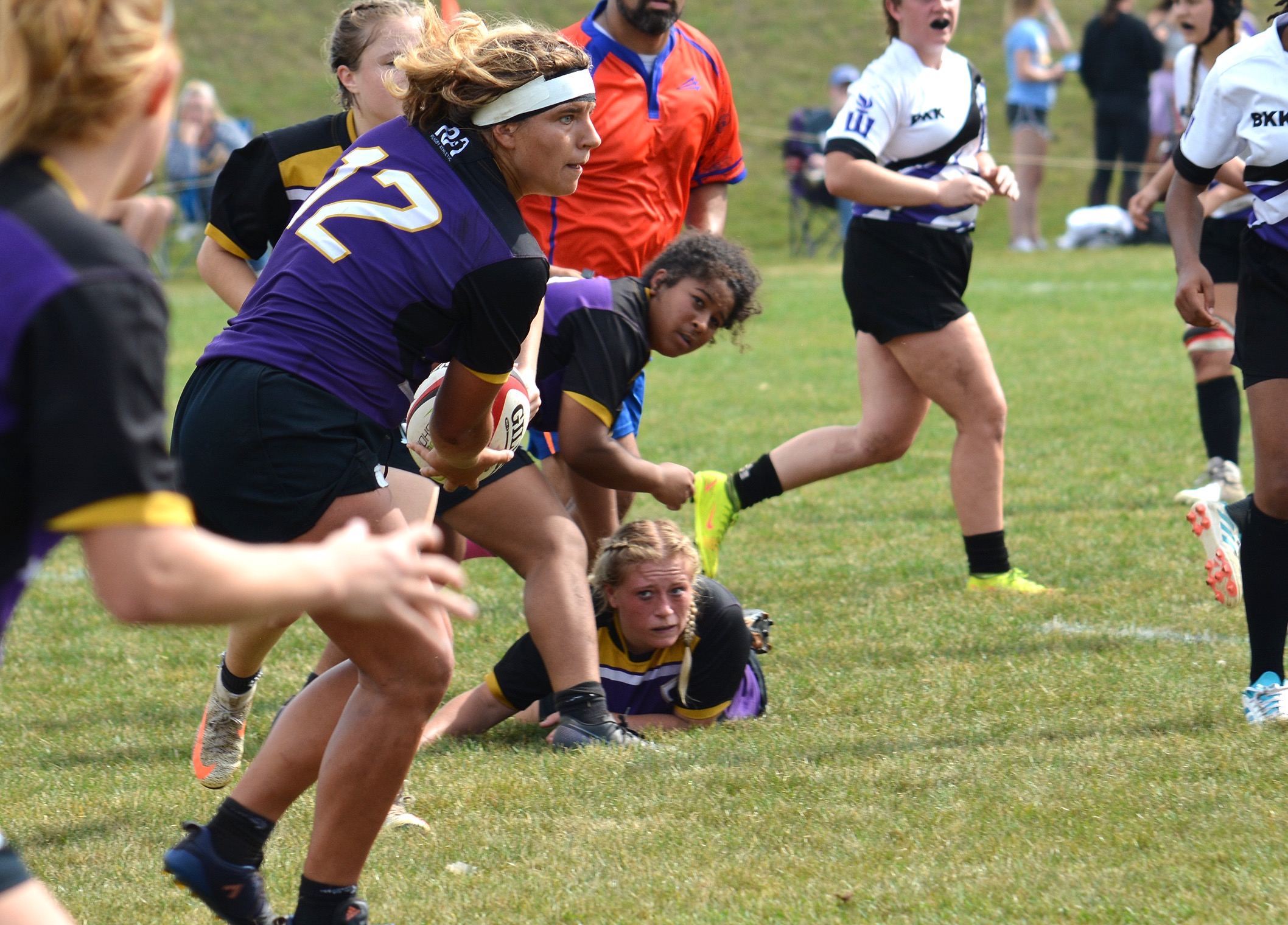 “It’s hard to explain but I’ve had a feeling from the get-go that we had a really good team,” Flanigan said of the run-up to fall 2021. “The chemistry of the players off the field is so strong that going into the fall season – and we talked about this goal as a team – that we could end up at the top of our conference and had a really good shot of going far in the post-season, solely because we were able to have a full year last year, minus playing games in the fall. We set our standards high this fall based on what we were able to do last year.”

Flanigan’s suspicions inched closer to reality during Super Saturday – a pre-season tournament between all of the DI Midwest teams. The 20-minute quarters allowed squads to ease back into the game, considering no one (save those who made the Iowa Selects side that played Palmer College in spring 2021) had played 15s since 2019.

“The first game, the continuity and chemistry on the field – it blew my mind,” Flanigan said. “We looked like a team at the end of the season. We gelled so quickly. That weekend was a pivotal moment in terms of thinking about the preparation for the season. ‘This is going to be a good fall for us.’”

UNI started its season against Iowa State and banked a 63-10 win. 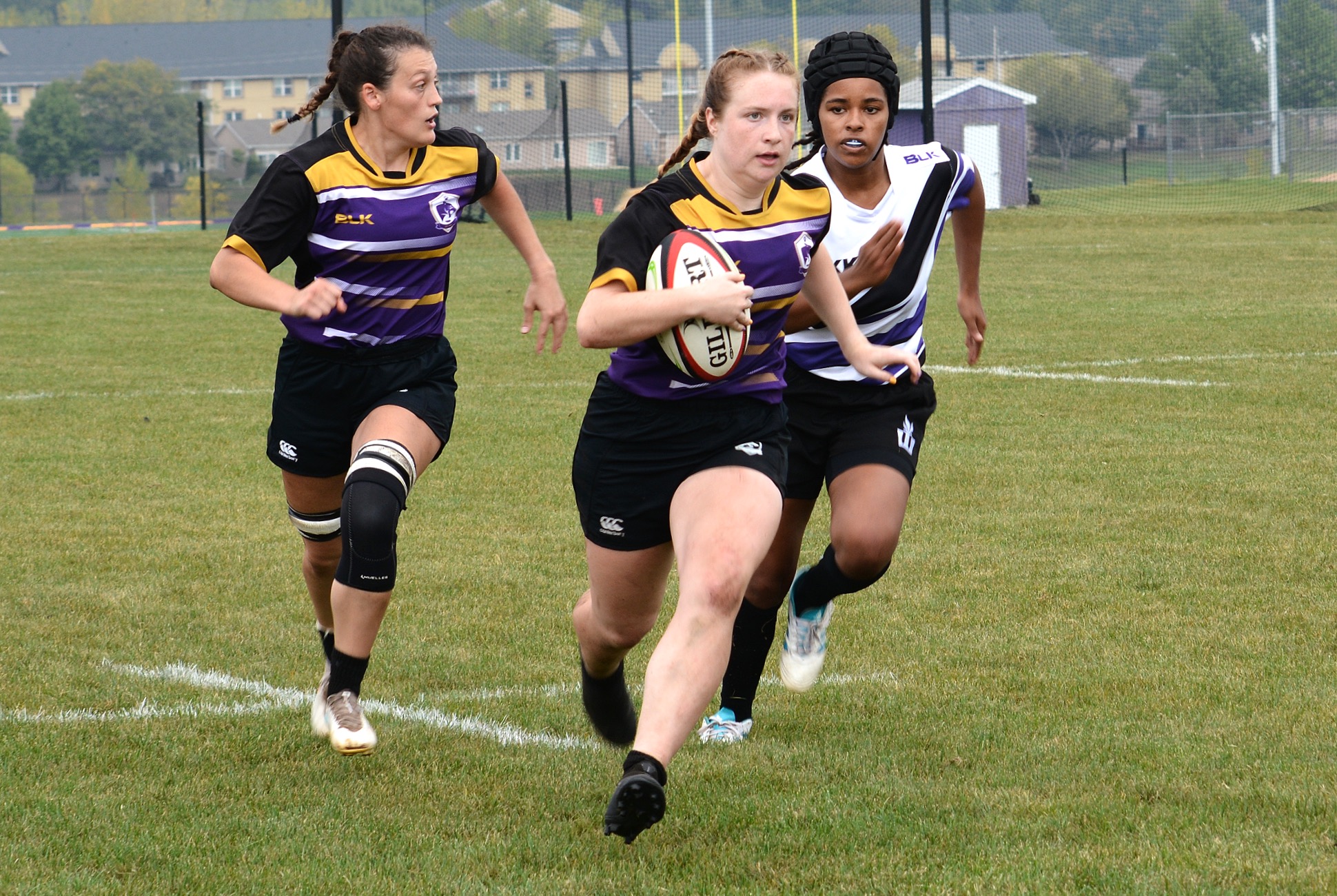 “We knew they’d be tough but also there are so many factors in playing them,” Flanigan said. “Number one, my relationship with [ISU head coach] Kelsie [McDowell]. We played together at UNI and are best friends. And second, since we were the only teams that could play last spring, we played each other 10 times in the last eight months. So that was hard. It was, ‘OK … here we go again.’ All the players are friends with one another, which is good for the Iowa Select side, but makes for a weird, mental, tough game [in league]. They’re a really good team and we had to come out and go right away. The first half was tough and then we got our feet running under us.”

It was a good win, but Flanigan noticed that Burns was reluctant to lean on any early-season success. That’s when the coach realized that the captain was operating from a fall 2019 mindset. The last time UNI competed in a regular season, the Panthers finished runner-up in the DI Midwest conference and advanced to regional playoffs. Only two players on that team had experience in the post-season so there was little understanding of what awaited. UNI played Davenport in the Wild Card round and lost by 60 points, but it was an important marker for the squad. 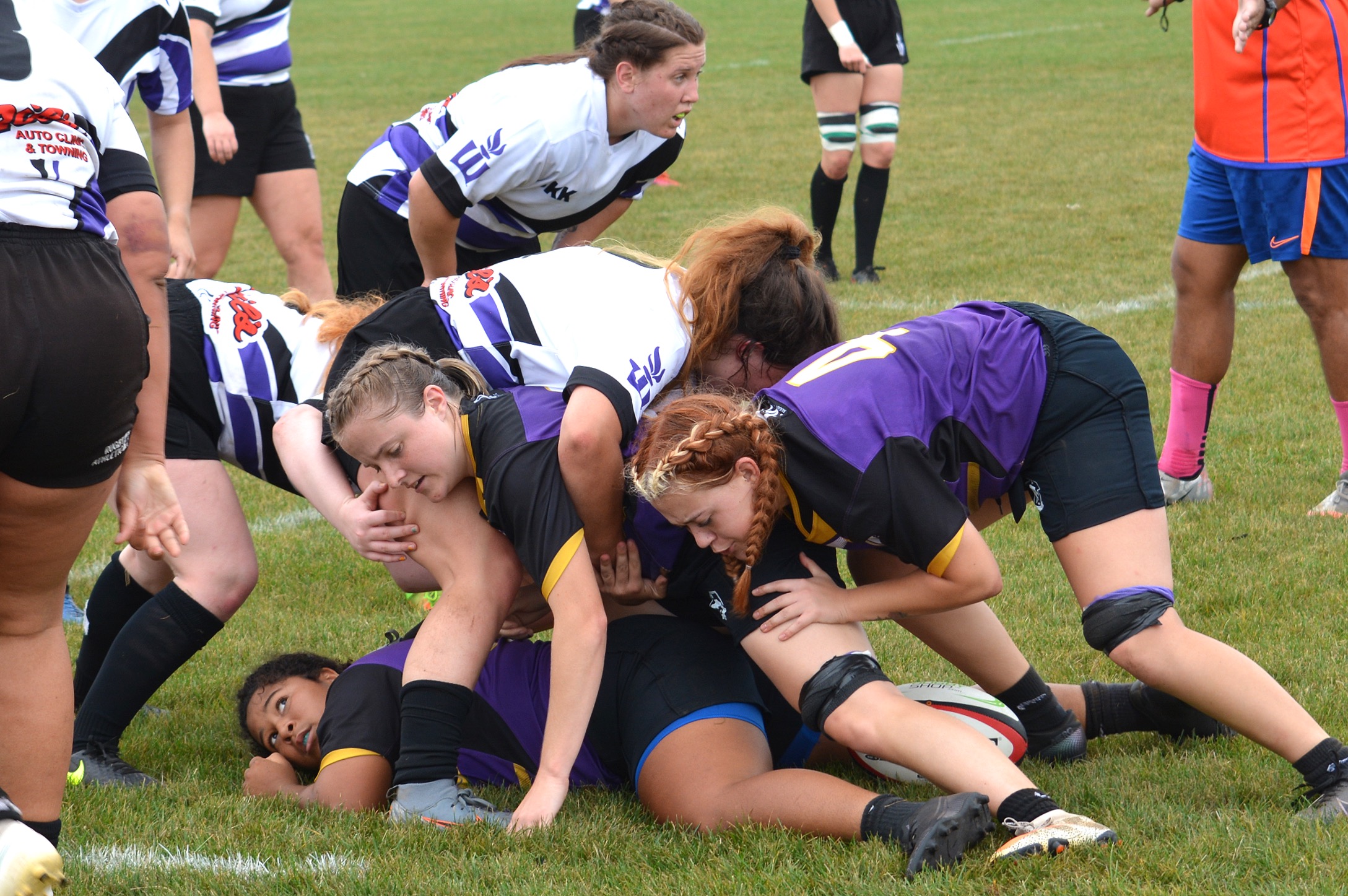 “That’s when the tide started to change. ‘Oh, this is the post-season,’” Flanigan said of valuable context. “We worked hard that [2020] spring, and then Covid happened. And that’s also why we worked so hard last year.”

When Burns started to talking to the team about goals for the impending Winona State match, she was tapping into the experiences from fall 2019.

“It was, ‘This team’s going to score on us and we’ve got to come back ready.’ That’s when we talked,” Flanigan said of Burns’ shift. “‘We’re not that team anymore. You need that confidence that you are a good team. We’re different now.’ She took that and put the past behind her and really took the team to the next level of confidence. After the Winona game, it was, ‘O.K., we got this.’”

Flanigan chalked Burns’ mindset up to her competitive nature and the drive to be as prepared as possible. The team met her, and banked a 105-0 win against Winona State, followed by a forfeit win against Wisconsin, which was actually two 10s matches.

“Our biggest test was last weekend against Minnesota, just because of their physicality,” Flanigan said. “They’re disciplined and well coached, and I knew they’d get better as the season went on. We were preparing for a hard match with them.” 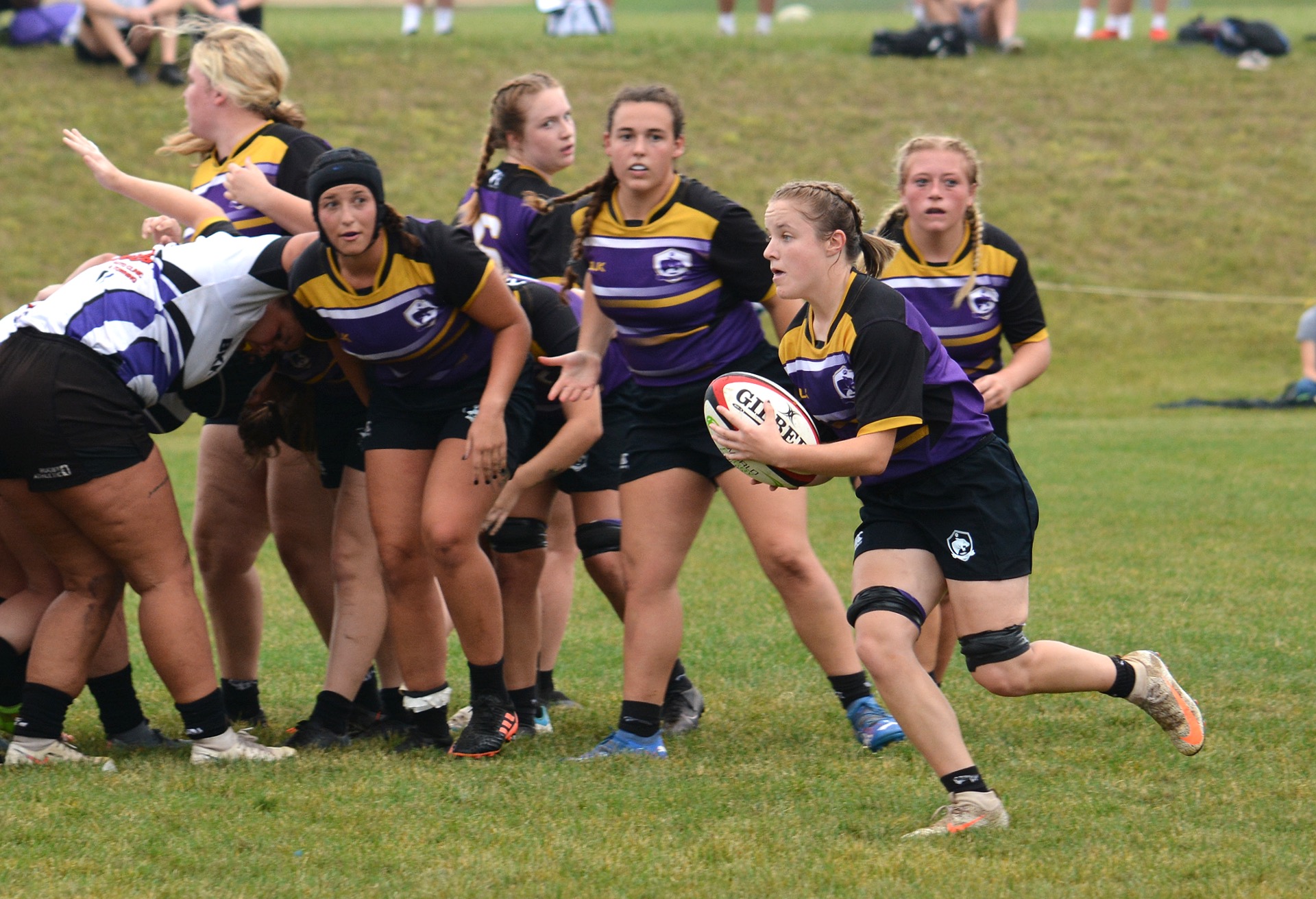 “Aub
rey Buresh has had a standout season,” Flanigan said of the junior. “She puts her head down and works hard. She’s huge on defense for us and averages 10 tackles a game. Same on offense. She averages at least three tries a game.”

Junior fullback Sierra Norman and Isabelle Thomasee have been welcome returners as well. They’re playing for the first time since fall 2019, as both attended school virtually for the entirety of the 2020-21 school year.

“It’s like riding a bike,” Flanigan marveled. “They’ve come back and nothing’s changed.”

Flanigan has also been impressed with Emma Bacon, a high school recruit out of Southeast Polk.

“She was a top prospect for the last two years,” the coach said of the freshman. “We got her to tour the campus this summer and she committed, and she’s been a standout. She’s a hard, hard worker, and a playmaker. She makes a big impact every time she touches the ball, and we’re so pumped to have her.” 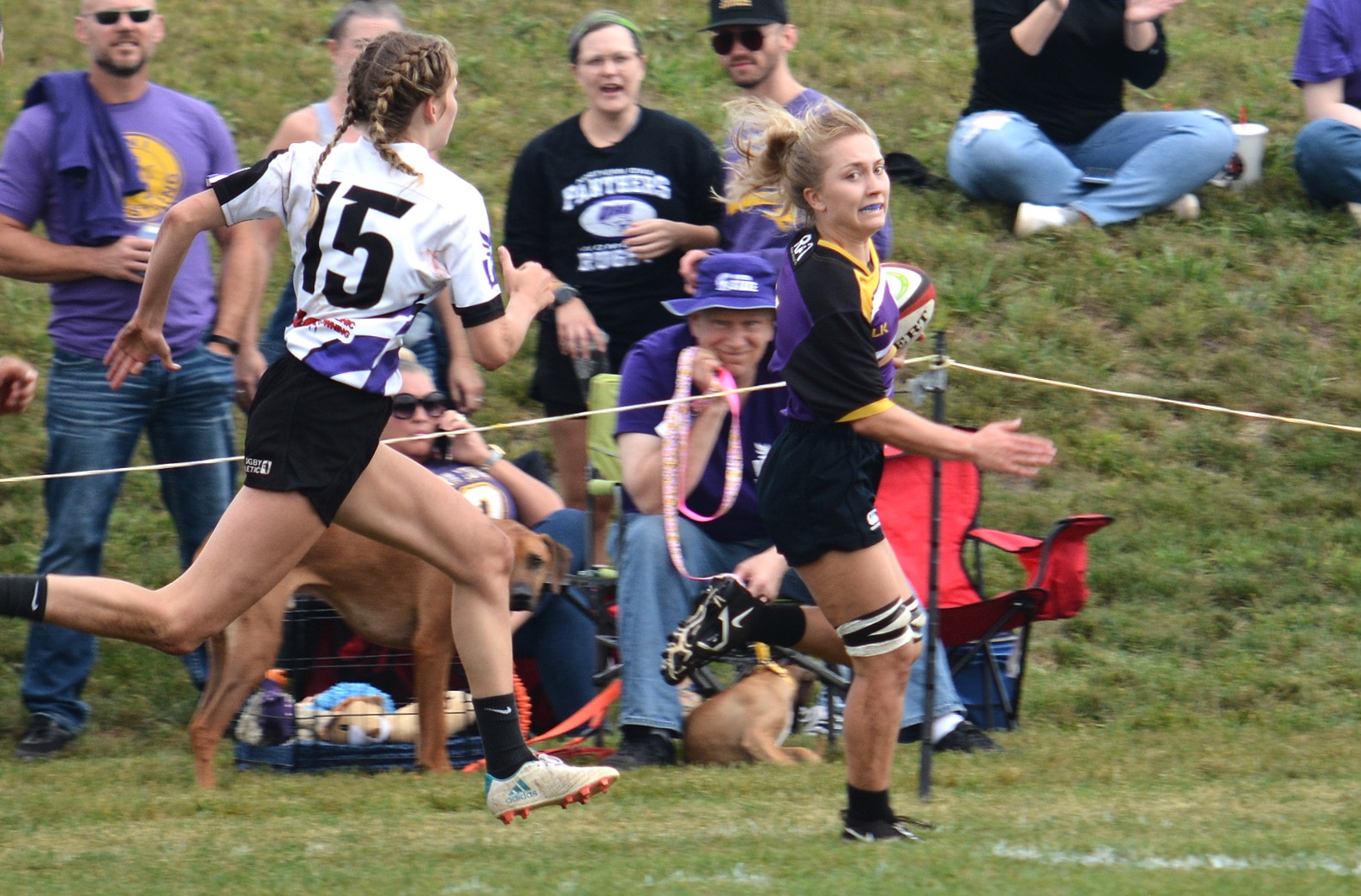 The whole squad has a unique opportunity to test itself this weekend, as UNI is traveling to Queens University of Charlotte (N.C.) for 15s friendlies.

“Katie [Wurst] and I set that up early this summer,” said Flanigan, who also registered her players with USA Rugby to avoid any potential red tape. The dual registration also allowed eight players to attend a U23 camp with USA staff earlier this fall.

“Queens is really good and we’ll see where we’re at with them since they’re at a different level with NIRA. It’ll be a good testament to who we are as a team,” the coach continued. “We’re calling it a ‘Team VayKay,’ our get-away. Then we’ll come back and hit the ground running and keep working hard at practice.”

When the team does return home, they’ll be preparing for the NCR DI Round of 16 on Nov. 13-14. The Panthers are fortunate to be competing locally in Iowa Falls. 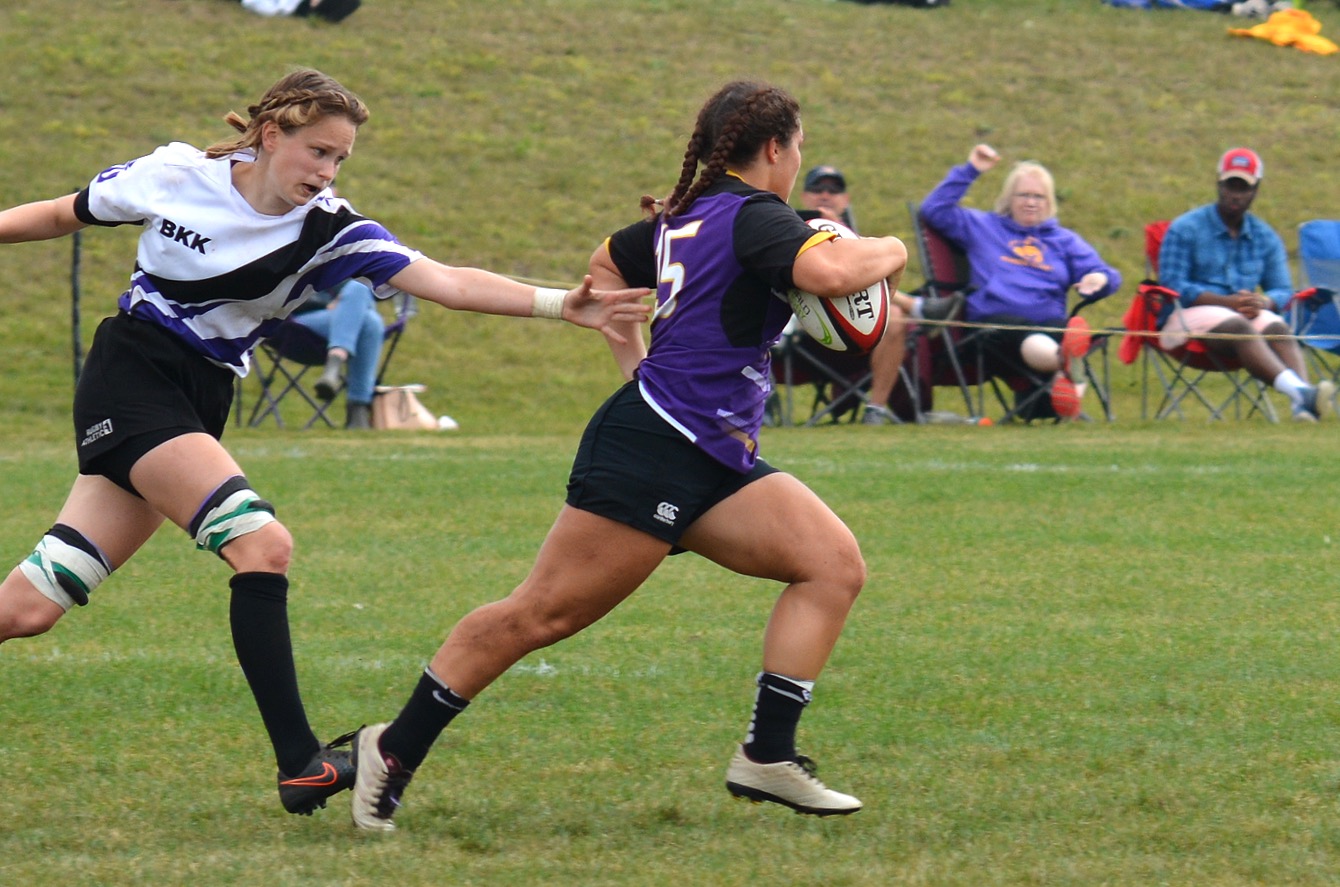 “We found that we work better when we have no pressure,” Flanigan said of post-season goals. “They learned that from last year while winning regionals for 7s and at the CRCs, when there are no expectations. The goal is to always win and make it as far as you can; a national championship is always the long-term goal. But we put that in our rearview mirror and know it’s there, but we haven’t touched base with it since, because we don’t want to overthink it. Each week has its own little goals. Get 1% better every day, then everything else will fall in line.”

Iowa Falls is hosting the West Region, while Elkhart, Ind. (Midwest), Danville, Va. (South) and Syracuse, N.Y. (Northeast) are also hosting DI and small college playoffs. The four regional victors will then report to Life Univ. in Marietta, Ga., on Dec. 4-5 for the national 15s championships.

“I’m very proud of them and try to tell them as often as I can,” Flanigan closed. “It’s really cool from an alumni perspective. This is UNI rugby. This is what it’s always been. Yes, there are successes on the field and winning, but you can see how much they love each other as friends and family. I’ve been trying to get that back and it’s better than ever before. I’m having the time of life with the team.”