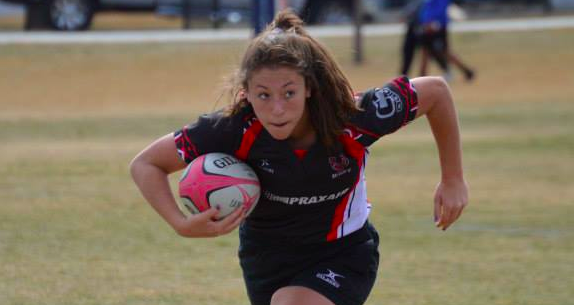 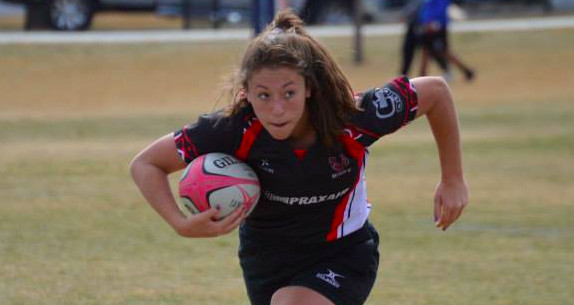 “I was more nervous than anyone,” United coach Matt Kanenwisher said of the build-up. “You think you have this strength or that strength, but you really don’t know what you can do until you’re tested. The game could have gone differently all based on that first try, but when we scored first, that was a huge psychological edge for us.

“The girls now know that they can compete,” the coach added. “Obviously, playing one game against a team that’s traveled and is playing in 4,000 ft. elevation is different than playing three high-level games in two days. So it’s not an indication of how we’d do at [high school club nationals], but it gives us context.”

United has traditionally lacked in size, so the team has embraced a fast-ball strategy to keep defenses moving. But that attack hinges on ball retention and the ability to drive the defense backward – a difficult task when facing the hard-running, ultra-physical Danville. Prop Cheyenne Nielsen set the standard in the forwards. The Idaho native joined during the fall 7s season and gave United good go-forward with ball in hand, jarring the defense and allowing the backs to enjoy more space.

That strategy saw United take a 17-5 lead with 10 minutes remaining in the first half, and then Danville answered with tries on either side of the break to lead 19-17. The teams traded scores afterward, and with 10 minutes in the game, United led 29-26. The home side scored in minute 57 to hold on for the win.

Inside center Charity Tenney was dynamite on offense and scored three of the team’s six tries.

“I continue to be surprised by Charity Tenney,” the coach said. “She’s talented and fast, but she is the hardest worker. Her tries, they weren’t backline moves, but came from a high work rate and finding herself in the right position again. I shouldn’t be surprised by her anymore, but I still am.”

Tenney transferred to United from the now-defunct Orem, along with several other backs like Kat Stowers and Addilyn Sorensen. They represent a portion of the players with higher-level experience, especially in 7s. Along with Lewanda Aspinall, Seini Ieremia and McKay Peisley, they receive extra instruction with the Utah Rugby Academy and impressed in the LVI’s Girls High School Elite division.

“The Orem players are great 7s – and 15s – players and fit right in,” Kanenwisher said. “When we’re outside the 15 meter, you don’t want to spend too much time rucking. They have such a rugby brain for keeping the ball alive, and we don’t need a ruck and can have a second backline full of loose forwards setting up and coming back the other way.”

Of course the other side of this free-flowing offense is a stout defense, and that was a struggle last night. High School All American Mata Hingano led the way in line-breaking and was a hallmark of the punishing brand of rugby that Danville embraces.

“Our biggest challenge was the hard running,” Kanenwisher said. “[Hingano] was unreal. She, a couple of their forwards, their No. 8 would hit the hole so hard and with great timing that they virtually went through every time. It’s the best I’ve seen. We set up a second line of defense – not because it was a strategy but because it was required the entire time.

“It was a hard game and got messy as the defense started to fall apart,” the coach added. “You get pounded in the middle and you start getting softened up.”

Both teams were grateful for the competitive match, especially United, which committed Monday to the High School Club Championship. Danville is returning to the event and preceded this Utah trip with one south to the Fullerton Invitational. The Lady Oaks move into the NorCal post-season against Sacramento next weekend, while United looks forward to its league game against Herriman as another test.