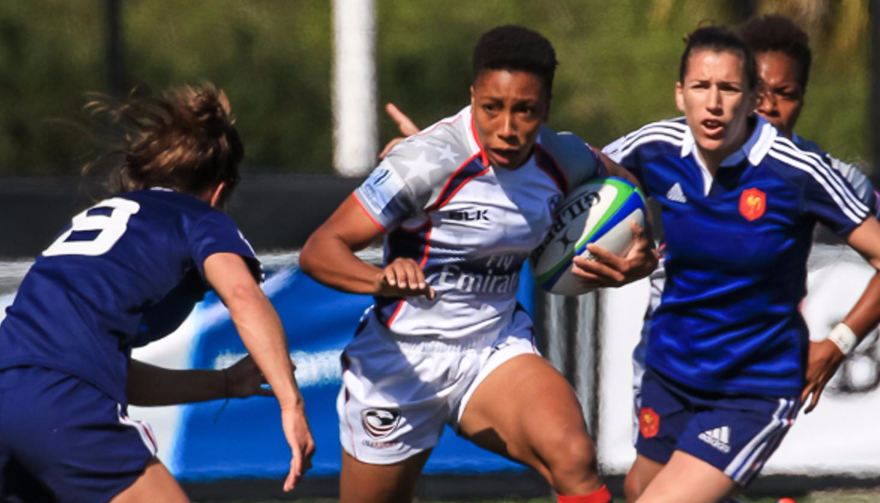 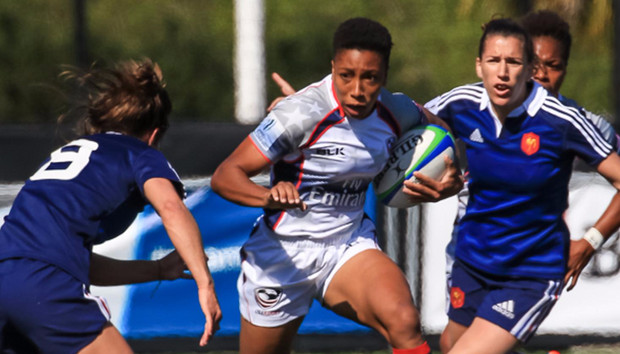 The USA Women 7s waited all of 30 seconds before scoring on England during the Sao Paulo 7s Cup quarterfinals. After a strong first half, a couple of lucky bounces, and a death knell try from Jessica Javelet, the Eagles beat the Roses 22-12 and advance to the Cup semifinals against Australia (1:12 p.m. EST).

The USA gathered the opening kickoff and moved it to Kristen Thomas on the sideline. There, the wing paused and assessed the situation, then took on her opposite, Abigail Brown. A step and a fend later, Thomas was in the open field cutting back past the sweeper and beneath the posts. Bui Baravilala converted for the 7-0 lead.

The Americans were a little more comfortable in their phases, although USA Women’s 7s coach Jules McCoy later instructed to play the sidelines more and resist the temptation to attack the center too early. A nice offensive set put the ball in Alev Kelter’s hands, and the scrumhalf took on Alice Richardson. The tackler got around Kelter’s legs, but the power runner kept pumping until Richardson slipped off. It took two more defenders to slow Kelter, which was enough time for Baravilala to pick from the tackle and score from a meter out, 12-0.

With approximately four minutes gone, the English finally got to play offense. Long, crisp passes filled the field, and the Roses built toward the Americans’ try line. Sarah McKenna got the line break that was all but a given try, but the finishing pass to Joanne Watmore was off. Watmore was taking an inside line and the pass hit the grass. Thomas was on the scene, scooped up the ball and trotted to the try line untouched. The USA took a 17-0 lead into the break.

Unsurprisingly, England returned to the pitch renewed, eager to put points on the board. The English were also very good at getting their hands on the ball and punished the USA for slow support. Heather Fisher made good use of the possession, switching into open field and just beating Kelter into the try zone (17-7).  Minutes later, two English defenders forced a not-releasing penalty, and a couple of sideline-to-sideline phases put Watmore into the corner, 17-12 with plenty of playing time remaining.

It looked like the game was going to turn completely when England turned over possession in the USA’s end, but fortunately for the Americans, Victoria Fleetwood was penalized for not releasing the ball as she attempted to give her breakaway second life. With approximately two minutes left, the USA was working in its own end, and a bad, trickling pass made its way to Ryan Carlyle. It was the perfect opportunity for the English defense to swarm and force a turnover, but instead, Carlyle kick-passed off the ground to Javelet, who tore away, weaving behind Watmore until she had the space to pull away untouched. After the conversion attempt, there was only a minute of play remaining, and it ended with a Fisher knock-on inside the USA’s 22 meter, 22-12.

A big test lies ahead in Australia, which beat Fiji 10-0 in the Cup quarterfinals. In the other Cup semifinal, Canada plays New Zealand.