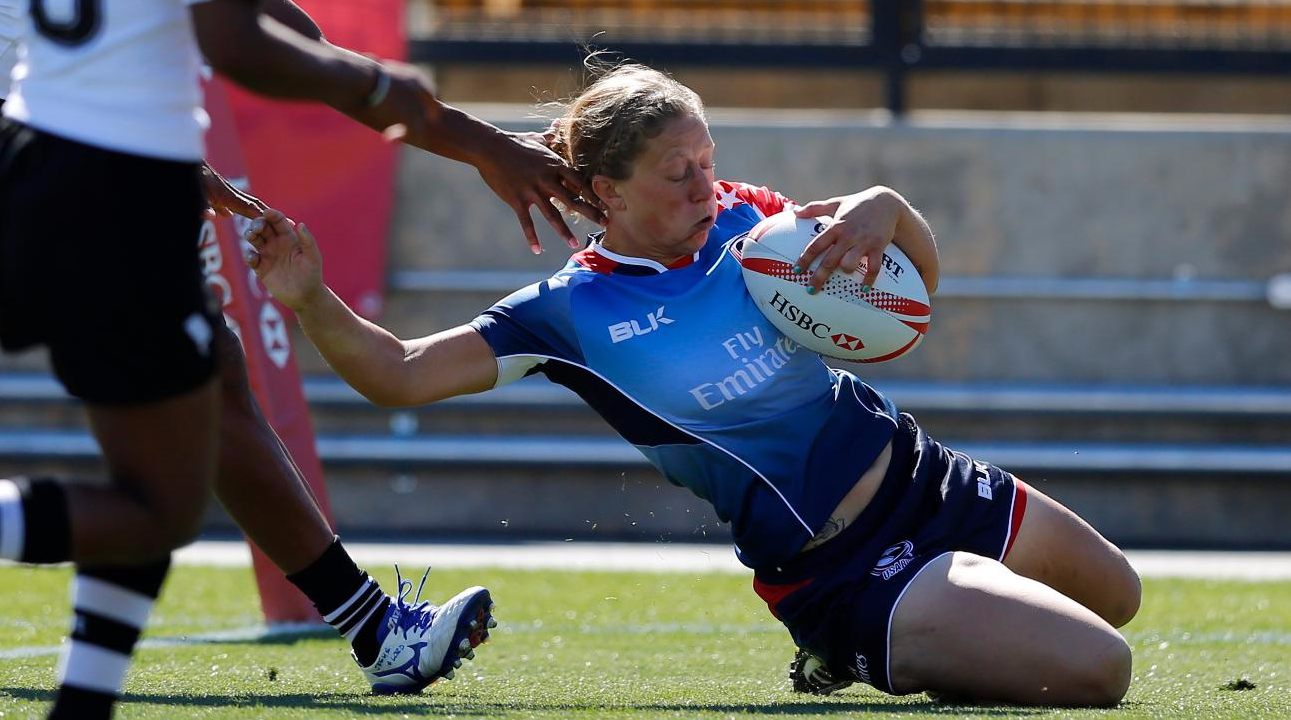 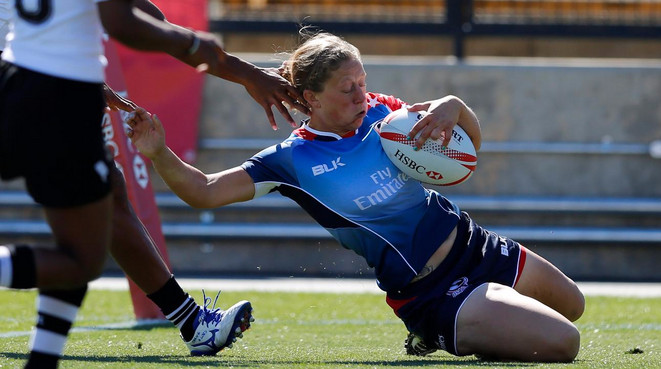 The USA defeated Fiji 38-0 in the Plate semifinals to advance. /// Photo: World Rugby

The tone was set by none other than Alev Kelter. After Russia bobbled the opening kickoff, Kelter busted through the defense until a lane opened up for Kristen Thomas on the wing. The flyer got close to the tryline but was pushed into touch. Russia moved its lineout ball to the far side and kicked downfield. Thomas had time to gather it and returned it well. Kate Zackary picked a little closer to the line, and then Richelle Stephens moved the ball to Ryan Carlyle and then Kelter on the sideline for the try, 5-0.

Russia came right back. A tricky scrumhalf, Nadezda Kudinova took a looping run around the breakdown to pull away into space. Bui Baravilala made the tackle from sweeper, while Baizat Khamidova was there for the offload. She palmed off Carlyle en route to the try. The conversion gave Russia the 7-5 lead.

Russia seemed to be gaining in confidence but committed a costly error when a pass was thrown into touch. Russia got its hands on the lineout throw-in but the ball fortuitously bobbled into Carlyle’s hands for the recovery. Ball moved wide to Stephens, who shrugged out of contact and finished her break in the try zone. Baravilala’s conversion gave the Eagles a 12-7 lead into the break.

During halftime, USA Women’s 7s coach Richie Walker told his players: No messing in the middle. The Eagles stretched the field during the first few phases of the second half, but turned the ball over when Nicole Heavirland cut back inside and was left isolated. Russia kicked away its possession again, and Javelet was there to move the ball away from chasers. Megan Bonny made some ground and drew a penalty after Russia didn’t release in the tackle. Baravilala kicked to touch to return to Russia’s end.

The lineout ball moved to Javelet, who kicked ahead twice with Khamidova in pursuit. The winger tripped up before reaching the try zone, but that put the USA in good field position. Russia got the scrum but sent a pass to ground, and Stephens was there to pounce on on it. But the drive ended in a dive-over attempt from Javelet, who lost control in the grounding.

Russia sent a booming kick into the USA’s end, and although the Eagles were there for the coverage, a forward pass to still-retreating teammates meant play was there to stay. But more Russian penalties allowed the U.S. a chance for relief, and it came in the form of a Thomas-Javelet track meet down the sideline. The ball then moved to Bonny on the far side, who was unintentionally high-tackled. The ref didn’t play advantage, which visibly irritated Heavirland, who was on the scene and already quick-tapping through the mark.

But the Eagles made good on the opportunity, moving the penalty back to Potter, who bullied to the line, offloaded to Baravilala whose quick hands put Bonny away. The flyhalf added the conversion for the 19-7 lead.

With the game in hand, there was still some excitement to play out. In injury time, Russia looked well on its way to a breakaway try, as Kudinova slipped past the defense with plenty of room to maneuver. Thomas closed the gap and made the tackle on Kudinova, who offloaded to a teammate. Thomas promptly tackled that player, who was now isolated. Javelet scooped up the ball and kicked to touch to end the game.

The USA will have the chance to immediately build on this performance, as the series continues in Vancouver next weekend.