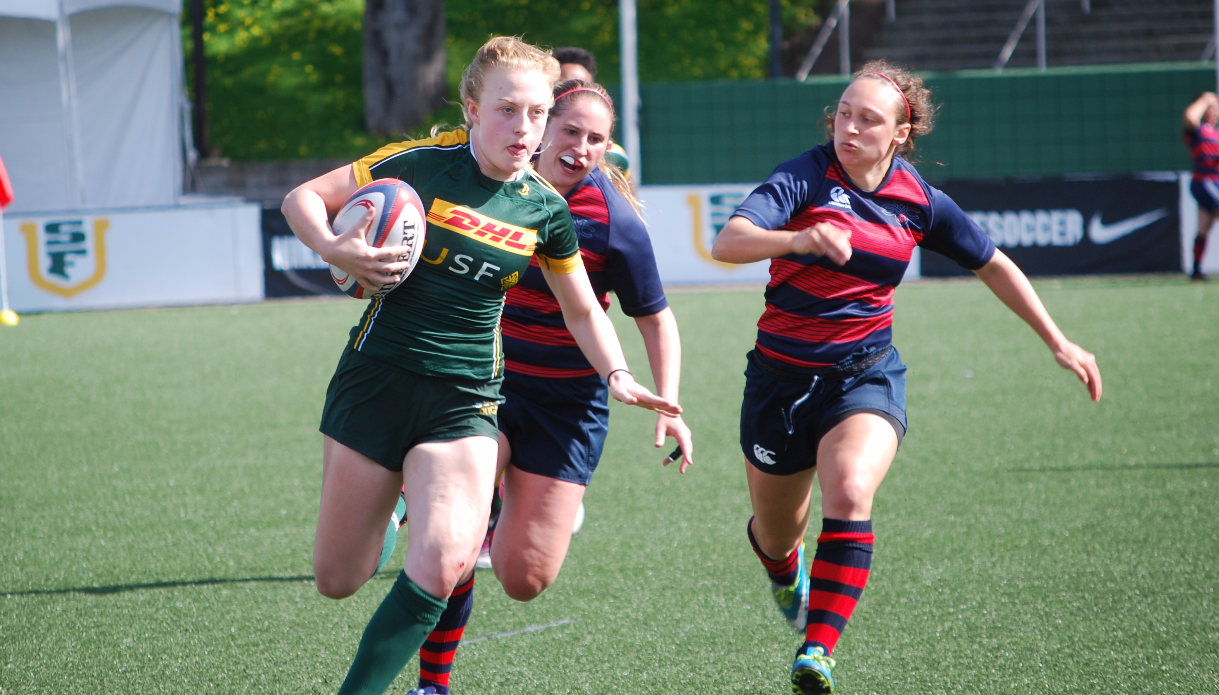 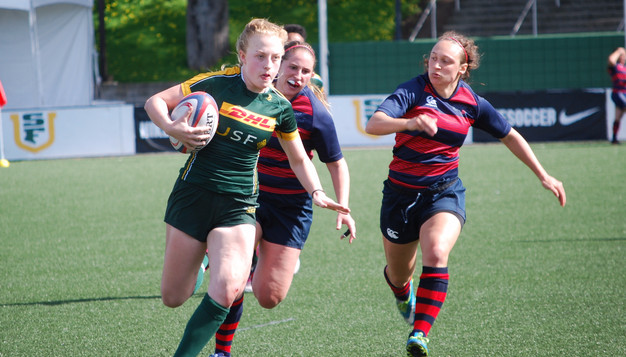 When USA Rugby announced the creation of DIII for women’s colleges, the West Coast conference embraced it. Led by conference commissioner Vicki Hudson, the northern California (plus one Nevada school) league split into DII and DIII to account for the divide in strength. And thus far, the move has proved advantageous.

“It’s made a big difference across the whole conference,” Hudson said. “For the first time, there have been no forfeits because lower-division teams didn’t want to travel to Humboldt or Reno for a 100-point loss. Last year, Humboldt had something like two games and no home games before playoffs.

“In the lower divisions, and in DII, teams had 30-40% growth on their rosters – except those teams that already 30-40 players,” the commissioner added. “St. Mary’s could barely field 15 at the beginning of last season and are now well over 30. USF is over 30, UC Santa Cruz in the 40s, Monterey Bay over 30. All of these teams have something to look forward to in the league. Two teams advance to the conference championship and someone would have a postseason ride into regionals.”

Hudson transferred from St. Mary’s to become the University of San Francisco’s head coach in the fall, and the new partnership has been mutually beneficial to both entities. The players were more amenable to Hudson’s style of coaching, and the commissioner also helped USF wade through eligibility issues.

Up until this season, USF had competed in the West Coast conference but was ineligible for playoffs due to its multi-school roster. Evidently, waivers can be attained for a number of non-USF students, meaning that the team could now compete in its first official season in 2016.

“I have a very positive approach to the game,” the coach explained. “I don’t believe that winning is everything or that winning should be the goal. Our goal is to play the best we can and have fun, and however the scoreboard turns out, that’s the consequence of what we achieve on the field.”

The first official game occurred on Jan. 30 against CSU Monterey Bay, and USF won 26-12. It was a pleasant surprise, but there were trials ahead. Hudson considers herself an old school coach, and her responsibilities end once the whistle blows. But with a very new team, Hudson found herself dictating from the sideline, but noticed the team’s performance suffered for it.

“I now limit the things I say to when a player does something good, calling that out,” Hudson said. “The captains have stepped up to fill that void of decision-making. They calm the team down – when we were down against Fresno, they got the team together for three deep breaths, and then kicked butt afterward.”

Halfbacks Kristie Dolan and Sydney Abel serve as captains. The former has assumed the role of scrumhalf and has managed the position well. Abel moved from the forwards into the flyhalf position and is the main voice on the field.

“We didn’t have a strong 10, but with her game knowledge and experience, I knew she could learn the position – she already has the hands and ability to kick,” Hudson said of Abel. “She’s been learning under the gun but has done a good job at flyhalf. She’s very level headed.”

“We were surprised with how well we did and didn’t anticipate as strong a season as we got,” Hudson said. “We only played the game right in front of us and never talked about the next game. My goal was not to end up at the bottom of the league, so after we won our first game, I thought: We’re good. We met our goal. Each week was a happy surprise.”

There is one more league game Saturday, but regardless of the outcome, USF will play Fresno State for the West Coast DIII conference championship on March 26.

“They were ecstatic once we knew that was going to happen,” Hudson said of playoffs. “They’ve never been able to play an on-record game, and now we’re going to the championship. We have five seniors, and they were playing four years ago when we qualified for the conference championship, but couldn’t play in it because we had no games on record. To get that whole experience resolved – they can now go on and finish a rugby career like that. It’s a great way to go out.”

Even though the conference title is important, it also won’t affect who moves onto DIII regionals. A technicality has eliminated Fresno State from participating at the DIII regionals; however, the team is able to apply for a DII at-large bid should it desire. Hudson indicated that more information on the DIII regional championship will be provided by Rich Cortez on Wednesday, but the games will occur at either UC Riverside or UC Davis. The DIII competition will not advance beyond the regional stage in this pilot year.