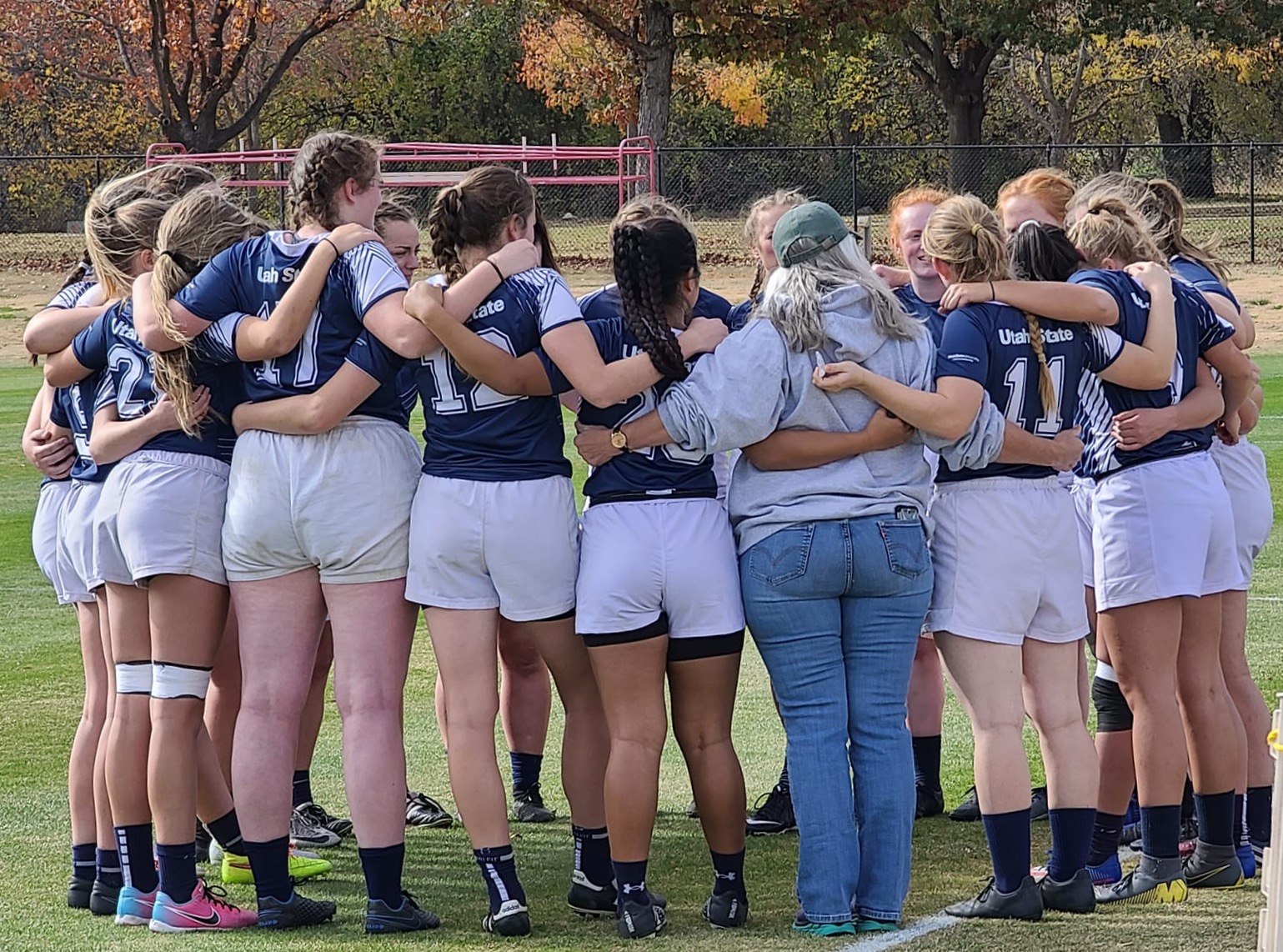 The western portion of the Collegiate Rugby Association of America (CRAA) DI Fall Championship playoffs are in Norman, Okla., and the top-seeded teams won their respective quarterfinals today. Rocky Mountain champion beat Michigan 40-19, and then Big 10 champion Davenport University topped Colorado University 72-10. The victors will face each other in Sunday’s semifinal to determine whose season will continue.

Davenport looked good. Crisp passes, running on – mistakes, of course – but good stalwart players to rein the performance back in. Addie Ochoa is a great 10, just calm in the face of defensive pressure, good vision and moved the ball at the right times. There was good incentive to do so, considering the evasion skills and lights-out speed of players like Grace Gohl. The outside center was fast that a single change of direction was all that was needed to keep the tracking defense at bay. Gohl had a hat trick, and speed wings Kaley Gustavus (2) and Lauren Peterson were also effective finishers and try-scorers.

Ochoa worked well with first-year scrumhalf Aubrey Crist, who showcased tear-away speed and managed the forwards well. And Bayleigh Gable of course was always working around the ball and kept the pack moving. From a penalty at the scrum, the No. 8 tapped through the mark, connected with flanker Valerie Goldsmith, who timed the pass to Gohl for the final pierce through the defense and try.

Lock Elizabeth O’Connor and flanker Ashleigh DeWitt – who took most of the conversions – were fun to watch, too. Getting involved with the backs and attacking confidently in space. Davenport was on attack a lot, but the defense had its highlights as well.

Colorado center Meghan Tualamalii was too subdue and so good about staying upright while bouncing out of contact. Tualamalii scored both second-half tries. After the second score, Davenport buckled down on defense and forced Colorado to move laterally deep in its end. Gohl finally stepped into a passing lane for the intercept and the ball eventually moved to O’Connor for the try.

Davenport built a 36-0 halftime lead and started bringing on subs in the second half. Colorado kept pushing and got those two second-half tries, as did the Panthers, who showed their depth by sending reserves Abbi Kowalczak, Anise Tuia and Chloe Baumann in for tries. Davenport banked the 72-10 win and berth to the semis.

The Utah State and Michigan game was more competitive, but the Rocky Mountain champs also showcased speed that Big Blue couldn’t contain. Abigail Hymas enforced her will from outside center and accounted for 35 points on five tries and five conversions. Of course, a lot of things have to go right in order for Hymas to have an opportunity to score. The set pieces have to be good, breakdowns must be secure, and passing skills need to connect. But Hymas can also pick up a loose ball and turn into into five points.

Minutes into the game an unforced error while crossing the try line halted play, but the referee was playing advantage and Utah State restarted with a penalty. The ball went immediately to the backs and flyhalf Brynn Ditman, whose mobility and size draws attention so close to the try line, went for a mini-break before sending it. Hymas beat the sliding defense for the converted try, 7-0.

Michigan was up for it and back-to-back scores produced the first lead change of the game. A quick tap penalty inside Utah State’s 22 moved to flanker Phoebe Block, who smartly cut back inside for lack of support out wide. The hard drive forward ended with a try and Kendall Skore conversion.

Big Blue was back on the board immediately. Jillian Cwycyshyn broke through the middle of the back line and tore away from Michigan’s end. A sure try looked like it was in the making and then fullback Rachel Billings and scrumhalf Kate Dittman closed the distance with an incredible chase. All three of them met at the try line and the initial call was for a held-up try. But after the assistant referee consultation, five points were awarded: 12-7 to Michigan.

All of this action occurred in the opening 10 minutes and then evened out for the next 10. Hymas reclaimed the lead for Utah State, going for a long run and converted try, and then the Rocky Mountain held onto the lead for the remainder of the game. Lauren Holding added a try before the break and Utah State enjoyed a 26-12 cushion.

Cwycyshyn was back at it and scored a second try that Block converted (26-19) but Utah State answered right away, as good teams do, to restore the point differential. Who did the honors? You guessed it: Hymas. Teh outside center added seven more points before game’s end for the 40-19 win.

Tomorrow, Davenport and Utah State will face each other in the western semifinal, and the victor will advance to the CRAA DI Fall Championship title match against the winner of Navy vs. Northeastern – the eastern semifinalists. The title match is Saturday, Dec. 4 in Matthews, N.C.