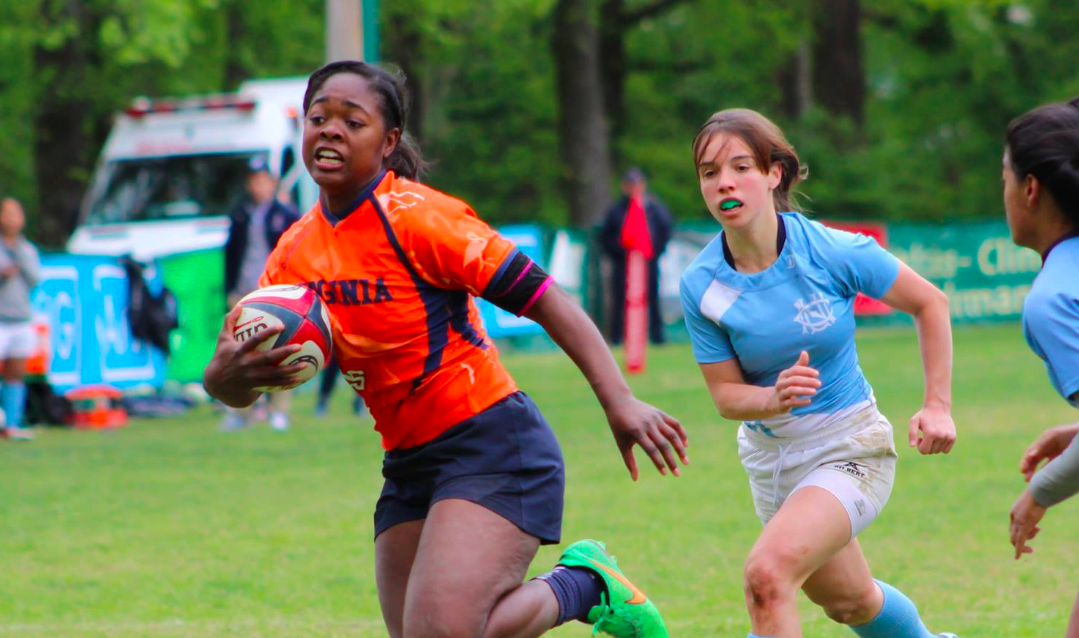 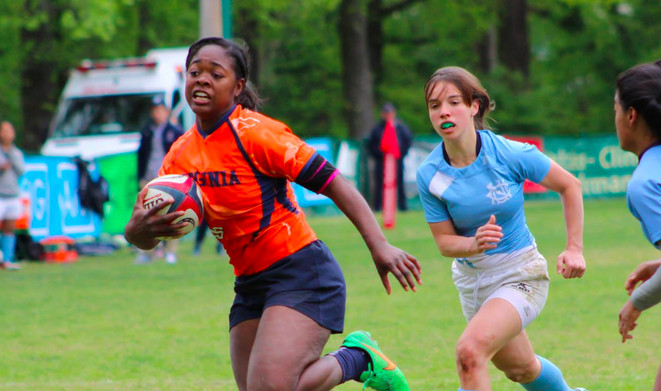 UVA travelled all the way to Marietta, Ga., to play two other Mason Dixon teams in the DI spring Round of 8. The Virginia side produced results similar to the previous weekend’s conference championship, defeating James Madison 82-12 on day one and North Carolina 36-7 for the berth to the DI spring championship on May 7.

On Saturday, James Madison launched a defense aimed at shutting down the wide attack, where top scorers like wing Joy Jefferson awaited. UVA adapted and shifted its attack to the center of the field and empowered the forward pack to make an impact. The call was more than answered by players like Luma Abunimer, Elizabeth Anderson, Debbie Ledezma and tighhead prop Christy Haney (pictured below, Mean Photography), who runs like a center and has a knack for squeezing through half-gaps. James Madison could only withstand that barrage for so long, and while Meg Rich performed admirably in her role as fullback, the floodgates opened to the tune of 82-12.

“We just knew too much about each other,” UVA coach Nancy Kechner said. “We never take any game for granted, but we felt like we’d see UNC on Sunday. Although it could have been UCF – that game was a slugfest.”

UNC has big forwards, but Central Florida has larger ones. They pounded each other, and while the Tar Heels prevailed 39-29, they also entered Sunday’s match more tender than usual (UCF defeated James Madison 34-24 in the consolation match Sunday). In contrast, UVA had played a speed game against James Madison and hadn’t spent the day running into a brick wall.

But it took some time for UNC’s tank to empty, and the Mason Dixon runner-up started the game by pinning UVA on its own five meter.

“They came out ready to play, but they got really tired because of their hard Saturday,” Kechner observed. “They also didn’t add any new wrinkles to their game plan. When they play it, it sucks for you. They just didn’t have the gas.”

But UNC did have Naya Tapper back. The USA Women’s 7s Eagle had left the program to take up residency at the Chula Vista OTC and earned her first cap at Sao Paulo 7s. She added some punch to the lineup and scored four tries against Central Florida. A powerful ballcarrier, Tapper scored the opening try against UVA and Tavoiya Whitworth converted for the 7-0 lead. 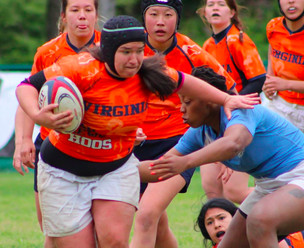 UVA answered with two tries to lead 10-7 at the half, but there was no sense of despair during the break.

“Frankie Beller in particular said, ‘This is what I live for,’” Kechner recounted. “The kids were stoked to have a good, tight game. But after that, they knuckled down, and any opportunity they saw, they just went.”

Centers Summer Harris-Jones and Zoe Schmitt neutralized Tapper, who preferred to crash rather than offload, with big double tackles. Tapper was eventually subbed out as was influential prop Tanya Houston, a big, mobile athlete who often scores from quick penalties. Hannah Turley did well to meet Houston on these penalties, wrapping her body around the front row, and UNC started opting for scrums instead.

UVA added 26 points in the second half while holding UNC scoreless for the 36-7 victory and spot in the spring championship. The team was fortunate to escape the weekend with no injuries, which is important for the roster of 22.

“I think we’ll match up well. We’re really excited to play a team that wants to play open rugby,” Kechner looked across the country to UC Davis, the other DI spring finalist. “And we’re going to California!”

UVA will take it easy this weekend and look toward D.C. Ruggerfest for some friendly matches on Saturday. It’s all refinement from here on out.


Player of the Week: Alev Kelter