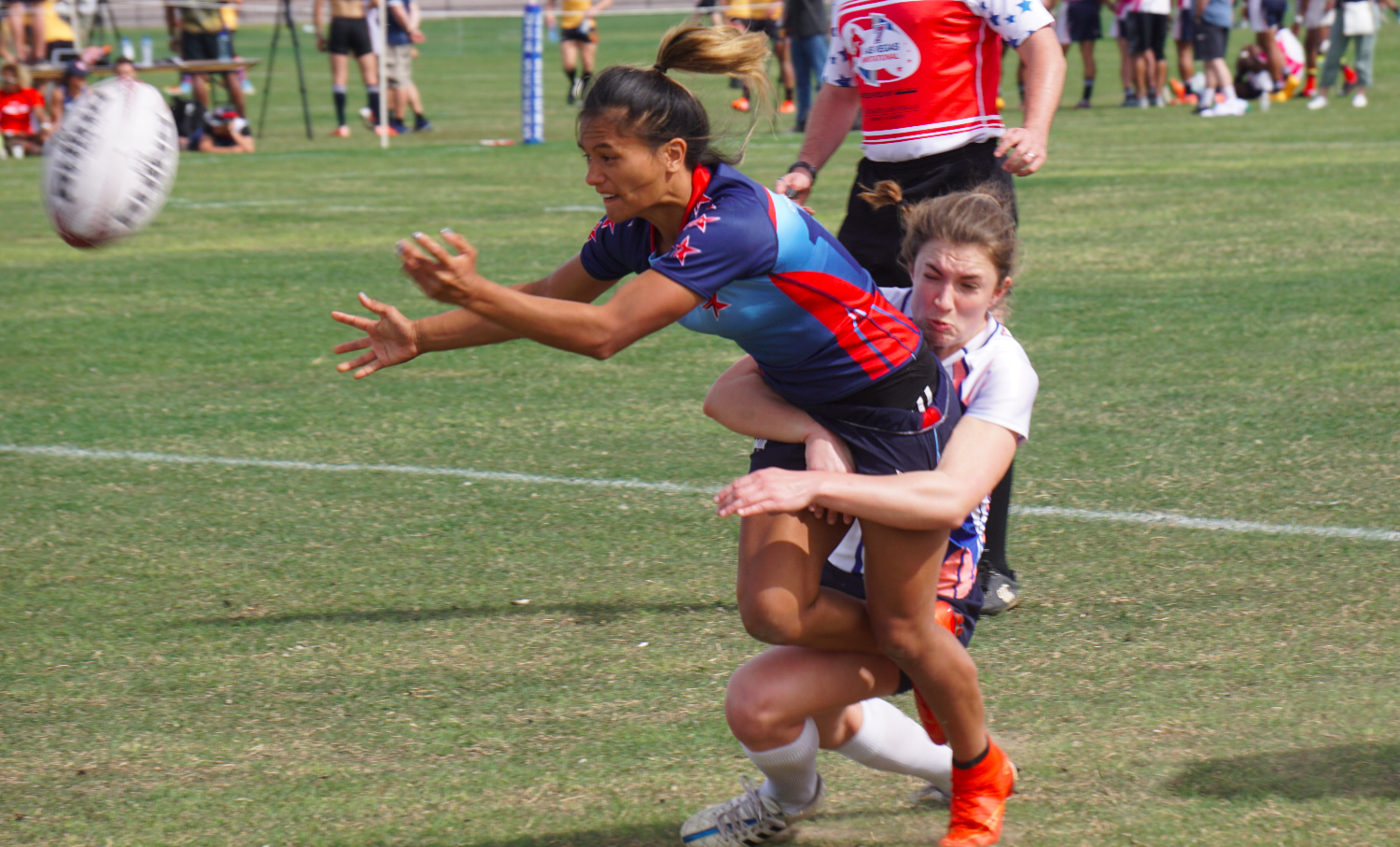 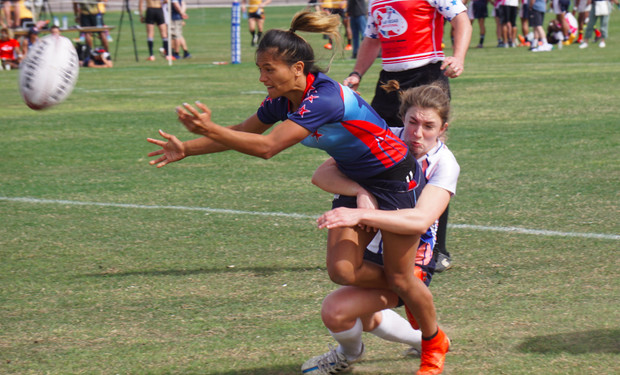 One of the best games of the day: Stars 1 vs. Northeast Academy.

The LVI Women’s Elite Division is spread out over four days, which is a difficult schedule logistically and physically. Today, the 15 teams (Mexico did not show) played the first two rounds of pool play, and tomorrow, the third round and quarterfinals will be contested.

The most interesting pool includes France, Japan, Scion and Florida; it’s the only one without two undefeated teams thus far. Scion pressured France to a 12-0 loss and then played a thriller against Japan. Two tries from Danielle Miano and one from Stacey Bridges gave Scion a 19-5 halftime lead, and then Emily Fulbrook added another five-pointer for the 26-5 lead after the break (Rozier was hitting some sideline conversions, too). Japan then rallied with three quick tries to pull within two (26-24) and was awarded an attacking scrum in Scion’s end with no time. Fortuitously, there was a turnover and Miano was able to kick to touch and secure the win.

Scion currently sits in third in its pool standings, but has winless Florida tomorrow while Japan plays 2-0 France. To make the Cup quarterfinals, Scion needs to beat Florida and the point differential, and hope France beats Japan by a big margin.

The USA Falcons won their two games against Brazil and Stars 2 by healthy margins. Kristen Thomas was lead try-scorer with four, whil Meya Bizer, Richelle Stephens and Nicole Heavirland hit some nice conversions on the day. The lone points-against came from Stars 2, a young team with lots of collegiate talent. Emilia Ferrara fought her way through contact on the sideline and fed SUNY Geneseo’s Tahlia Brody for the pull-away try. (Read Naya Tapper and Ashley Perry’s interview from the LVI today.)

But the best game in this pool occurred between South Africa (2-0) and Brazil. It was a very heated game with quick turns of possession and nice fends along the sideline. South Africa just pulled off the 12-5 win and has secured its Cup quarterfinal berth, regardless of what happens against the Falcons tomorrow morning.

Great Britain and ATAVUS lead their pool, which is missing Mexico. The pair played Rugby Quebec today, and Great Britain’s 40-5 win placed it above ATAVUS in the standings. The latter topped Rugby Quebec, which was highlighted by Alex Tessier, 24-14. Lilly Durbin played above her age grade and scored the opening try. The scrumhalf also jumped in the lineout and chased down a guaranteed try from long range. She was really superb. Nathalie Marchino looked as comfortable as ever and celebrated her returns with a try, and recent college grads Chelsey Sveinsson and Megan Foster both scored. Quebec is arguably the best team that will not be advancing to the Cup quarterfinals.

The Maple Leafs and Stars 1 are both undefeated, although that will change tomorrow morning. The best game in this pool occurred between the Northeast Academy and Stars 1 in the first round. The teams were well matched, with the Stars’ star found in Australia World Cup scrumhalf Nita Maynard. The Northeast’s youth impressed, especially Tess Feury who was able to chase down the wily Maynard and plant a couple of solid fends for ground. The Northeast’s Morgan Roberts dotted down after a Stars yellow card but the conversion missed. Frieda Fetu’u broke away and nearly scored a long-range try for the Stars, but good retention put the ball in the side-stepping Ashlee Byrge’s hands for the score. The conversion was good, and that made all the difference in the scoreless second half, 7-5 to the Stars.

For all but Japan and Scion, tomorrow’s third-round matches have little weight save seeding into knockouts. France, USA, South Africa, Great Britain, ATAVUS, Maple Leafs, Stars 1, and either Japan or Scion will compete in the Cup quarterfinals. All but the Cup semifinalists will play out the rest of their tournament on Saturday, while the final four wait for in-stadium games on Sunday.