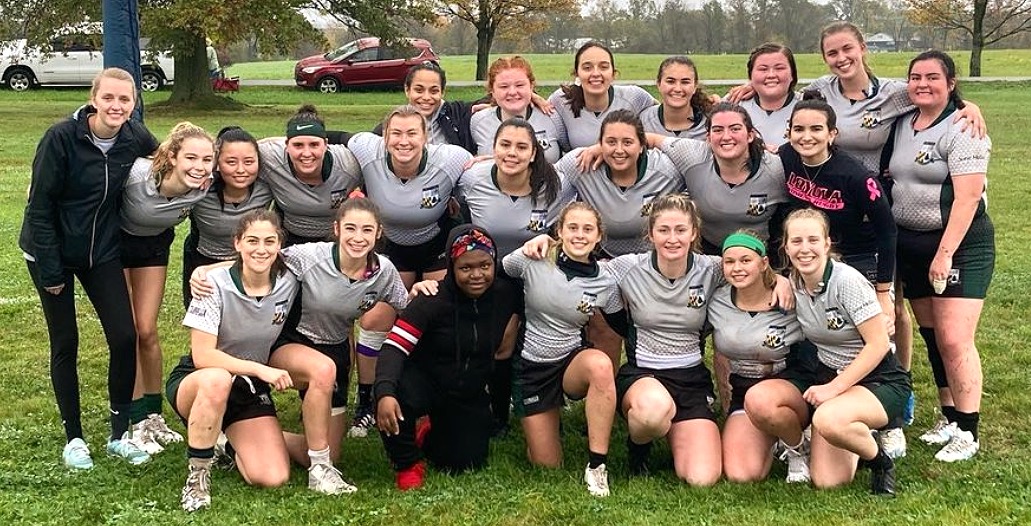 Loyola University of Maryland fielded a women’s side in the 80s, but the team disbanded for decades until returning in 2019. The Greyhounds were officially chartered in October 2019, and with the support of the university and larger Loyola Rugby organization, the team is re-establishing itself with ambitious goals.

Senior captains Mary Amonica and Gianna Calciano are founding members of this generation’s team, and were sophomores in fall 2019. Everyone was a rookie then, so that inaugural season was spent training and building a knowledge base. The fall ended with a controlled scrimmage against Catholic University, the alma mater of Loyola head coach Kathleen Malcotti. The Malcottis are a rugby family, and the coach’s dad and aunt played at Loyola, while her brother is the current captain of the men’s team.

In spring 2020, Loyola was able to scrimmage Marywood University before Covid-19 arrived. The pandemic year was tough on all teams, but especially young ones. Fortunately, the Greyhounds had a support structure already in place, so while hard work in terms of recruitment and retention awaited, the team wasn’t as vulnerable to dissolution like other teams that are solely student-run.

“We were worried coming into the fall,” Amonica said. “We lost a lot of seniors [to graduation] and it was hard to recruit. We assumed we’d be playing 7s in the fall, but not 10s or 15s.”

“We joined the EPRU and told them we were low on numbers and we would do what we can,” Calciano said. “But all the teams in the EPRU are in a similar situation because they lost two years of rugby players.”

The team buckled down on recruitment, attending the club sports fair and advertising on campus. The roster grew from single digits to 26, with 23-24 attending training regularly. As numbers grew, so did Loyola’s ambition. They started with 10s, and then learned of an interesting proposition.

“York had reached out and said if won one 15s game, then we had a shot at nationals,” Amonica said of the National Collegiate Rugby (NCR) small-college championship. “We had the numbers now, so why not? We’ve never played 15s but wanted to take this chance because we might never have an opportunity to play in [to nationals] like this.”

EPRU’s Shippensburg University was also interested in an NCR post-season, so the teams scheduled an Oct. 30 15s game in Gettysburg, Pa. The weekend prior, Loyola beat Towson 55-35 in 10s, so the Greyhounds had a week to learn 15s.

“We’ve never played 15s before,” Calciano said. “We spent the week focusing on scrums and lineouts, because those are the only things that are really different from 10s.”

“But 10s and 7s comparatively are more individualistic [than 15s],” Amonica added. “In 15s everyone feels like they can make a difference. So, yes, there were some nerves, but there were no expectations.”

Calciano and Amonica are the team’s scrumhalf and flyhalf, respectively, and so they are the key decision-makers on the pitch. They drove a 60-0 win against Shippensburg.

“We definitely used our heads a lot and had a lot of smart plays,” Calciano said. “I don’t know if Shippensburg was expecting that. We kept playing at a fast pace and used that to our advantage.”

Freshman Amanda Belmont stood out. The first-year came with rugby experience, and she has quickly become a difference-maker, driving the fast, smart game that Loyola prizes.

“Our back line was basically the same [from 10s], so the ball movement was good,” Amonica said. “We got it out to the wing and succeeded in scoring tries there.”

Amonica called out Cat Giordano, who helped keep the team’s goal for a shutout intact. She’s been cleaning up breakaways and planting try-saving tackles all season and is stepping into a leadership role. Claudia Valentine was great in the rucks as well and is the younger sister to a former player.

“The forwards hit their tackles well and scored off a scrum one time,” Amonica continued. “It was their first [eight-person] scrum, and for them to win and score – it’s built a lot of momentum for them.”

Ema Brauchler led the forwards, and had the team expected to play 15s this year, then she would have been named pack captain.

“She led, I’d say, 80% of the pods and was curshing girls,” Calciano said. “She was gaining 10 meters with every pod, and several players were needed to take her down. That opened up a lot of space for our back line.”

The team didn’t set any expectations for its first 15s match, but it exited the game with a big boost of confidence.

“We played like a team, and we’ll take that going forward,” Amonica said.

Now Loyola is heading to the NCR Small College Round of 16/8 on Nov. 13-14. There are four regional playoff locations, and Danville, Va., is closest to the Greyhounds. The run-up is being spent honing skills and reviewing set pieces, and maybe adding in some new elements for post-season. The team has another fixture tonight, Friday, against a combined Catholic and Howard University squad.

“We threw everything together for our first 15s match and were just taking it as it goes, but now that we know what it looks like, we’ll work on other things,” Amonica said. “We played very simplistic on Saturday so we’ll need to work on more tactics.”

“This past Saturday was supposed to be our last game of the season so I think everyone is happy to play a little longer and be together,” Calciano said of the team’s mentality. “Honestly, we’re just looking to play as much as we can. This will be everyone’s first playoff experience and we want to give the seniors as good of a game as possible. Let’s end the season well and grow some interest in the game.”

It’s a win-win situation for Loyola, as this whole season and post-season push will form a foundation from which to grow. The captains are well aware of the impact of featuring on a national stage.

“Us going to nationals means more people will learn about rugby, and that’s what we want to do – get more recruits,” Amonica said. “Plus, this will be a great experience. We’ll travel together and mesh as a team, and that will help for the future, too.”

The duo also spoke about building its alumnae base and replicating the support system that the men’s program has. The team wants to do well at playoffs, but they’re looking at every gain in the context of long-term stability.