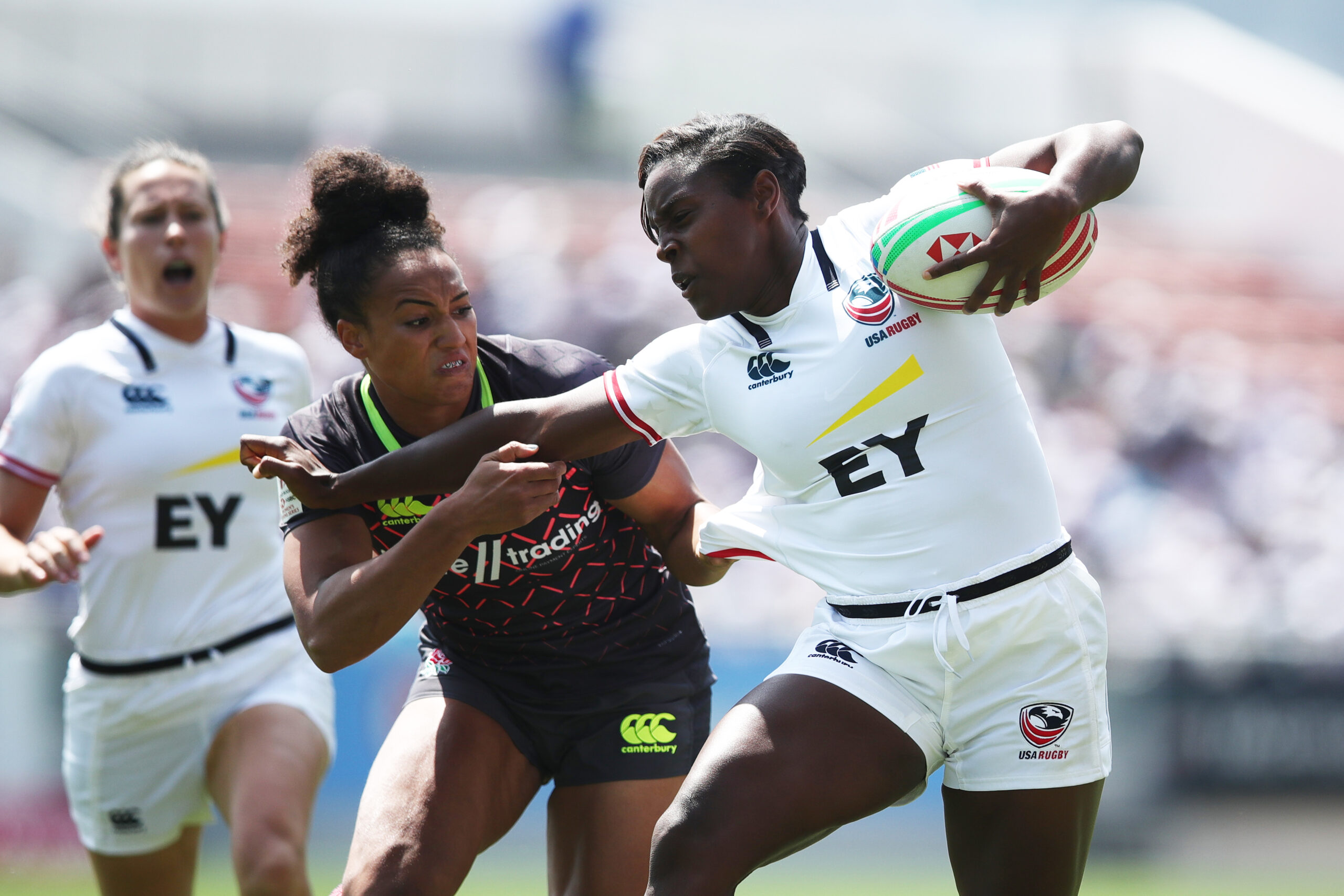 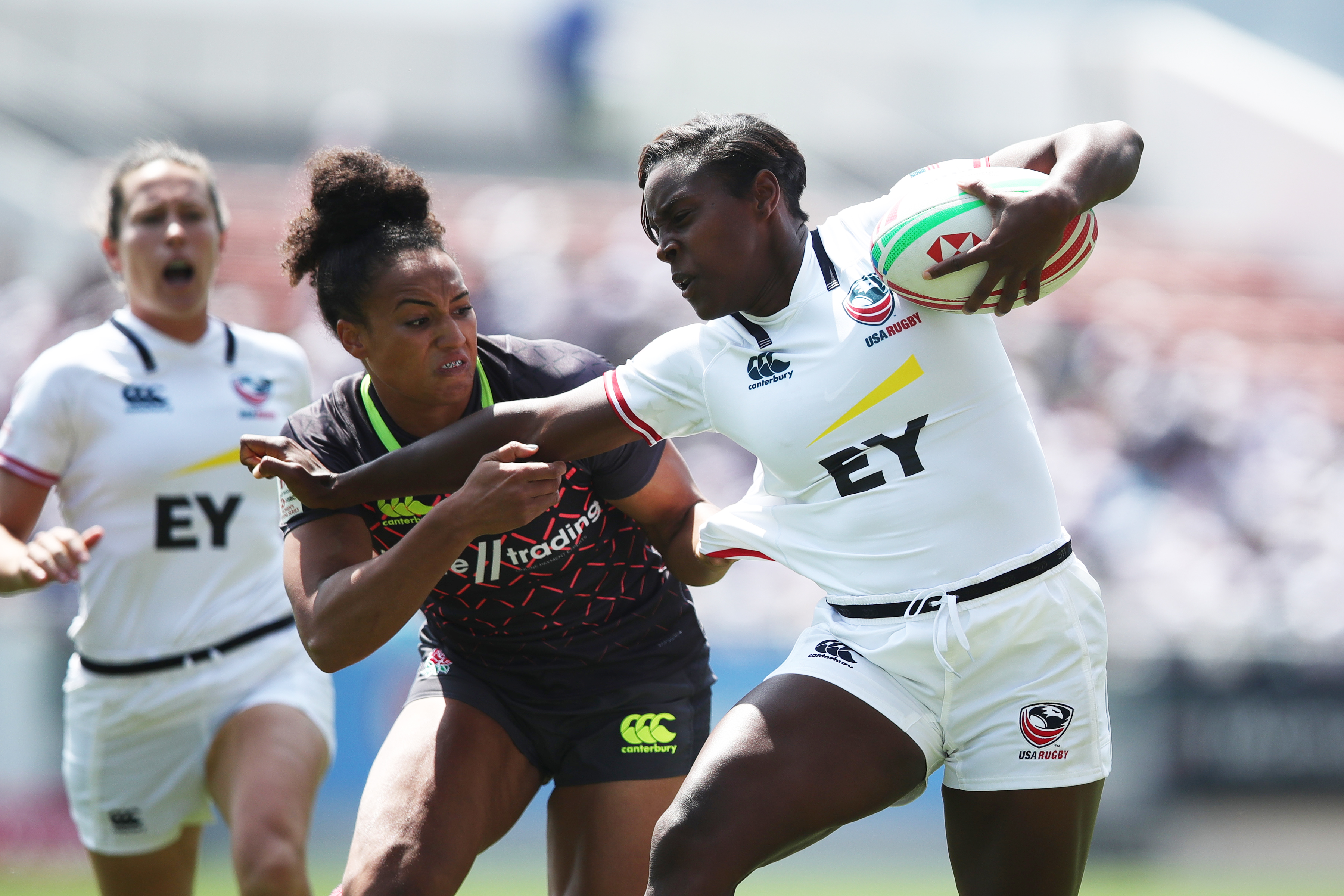 The USA dominated England in the opening round of the Kitakyushu 7s, the fourth stop on the HSBC World Rugby Women’s Sevens Series. Just one error – a not-10 restart – allowed England to get on the scoreboard, but it was all Eagles in the 43-7 victory.

The Eagles were sharp and did well to turn its opportunities – whether gifted or forced – into points. The kickoffs and restarts were a prime example. High flyers like Kristen Thomas exerted pressure in the air and co-captain Nicole Heavirland scrambled on the ground to steal possession. Meanwhile, England let nearly every restart hit the ground, allowing the USA defense to swarm or see the ball pushed into touch. The USA then played with great confidence on offense, sure in the tackle and breakdown, and calm when having to run the ball out of its own end.

England let the opening kickoff hit the ground and Heavirland drew a penalty when scooping up possession. Although there was a turnover out wide when a mistimed pass resulted in a knock-on, the USA forwards then stole the subsequent scrum. Thomas put a nice in-and-out move on her opposite for the opening score, 5-0.

The subsequent restart didn’t go 10 and England went quickly from the 50 meter. Holly Aitchison sent a flat pass to Helena Rowland on a nice line through the defense and pull-away try, which Aitchison converted, 7-5.

England restarted with the ball at the 50, as the referee awarded a penalty for a hit after the try was scored. The momentum didn’t last long though and a knock-on handed the ball back to the USA. A long pass from co-captain Lauren Doyle saw Alev Kelter float away from her opposite and tear away for a long score, 10-7.

Heavirland stole possession again after the restart but a turnover in contact allowed England to build a solid series to inside the USA’s 22 meter. The Eagles – Jordan Matyas in particular – did well to contest the breakdowns but England was calm and collected. When in striking distance, the ball moved wide to Celia Quansah, who had the corner but couldn’t slip past Naya Tapper. The U.S. wing did a great job quelling the attack and then drawing a not-releasing penalty.

Cheta Emba and Ilona Maher then came onto the pitch as Kelter kicked to touch from the USA’s five meter, and then a solid lineout got the Eagles out of its danger zone. With time expired, Emba took on Aitchison out wide, winning the physical and speed battle for the try, 17-7.

That score was everything. England was five meters from scoring but instead, the USA extended its lead, quickly, from the turnover. The mood was different for the second half. England sent the second-half kickoff deep and the Eagles were confident as they tried to run the ball out of its five meter. There was a testy moment when it appeared Joanne Fa’avesi was going to be held up in the tackle, but the ball went to ground and moved to Tapper, who drew defenders and sent the offload to Doyle looping around.

Doyle tore away but Emma Uren kept pace. The 21-year-old tracked down Doyle at the one meter and did a fabulous job of getting to her feet and preventing the ballcarrier from stretching over the line. Uren didn’t get the not-releasing penalty, however, and the USA support did well to retain possession and draw that very penalty shortly afterward. Maher drew in the defense and then Fa’avesi scored easily under the posts. Kelter converted, 24-7.

England couldn’t hold onto the ball long enough, and a forward pass handed the USA a scrum on England’s 40 meter. Penn State alumnae Kayla Canett and Meya Bizer both took pitch, with the former stepping in at scrumhalf. The ball moved to Tapper, who pushed off Uren and Ellie Kildunne coming across for her 66th try. Kelter converted, 31-7.

England let the restart roll into touch and the subsequent lineout set up near the 22 meter. The ball moved wide to Kristi Kirshe who drew in two defenders and did an excellent job of presenting the ball, so Canett could move it away quickly. Tapper took the outlet pass and – you guessed it – pushed off her opposite for the try, 36-7.

Another trend – England letting the restart hit the ground – allowed the defense to exert pressure and Tapper drew a holding-on penalty in the tackle. Maher dragged the defense to within meters of the try line and then it recycled to Kelter, who stepped through traffic for the dive-over and conversion, 43-7.

It was a replete performance from the USA and a really great platform off which to build. Up next: Fiji at 9:36 p.m. PT.