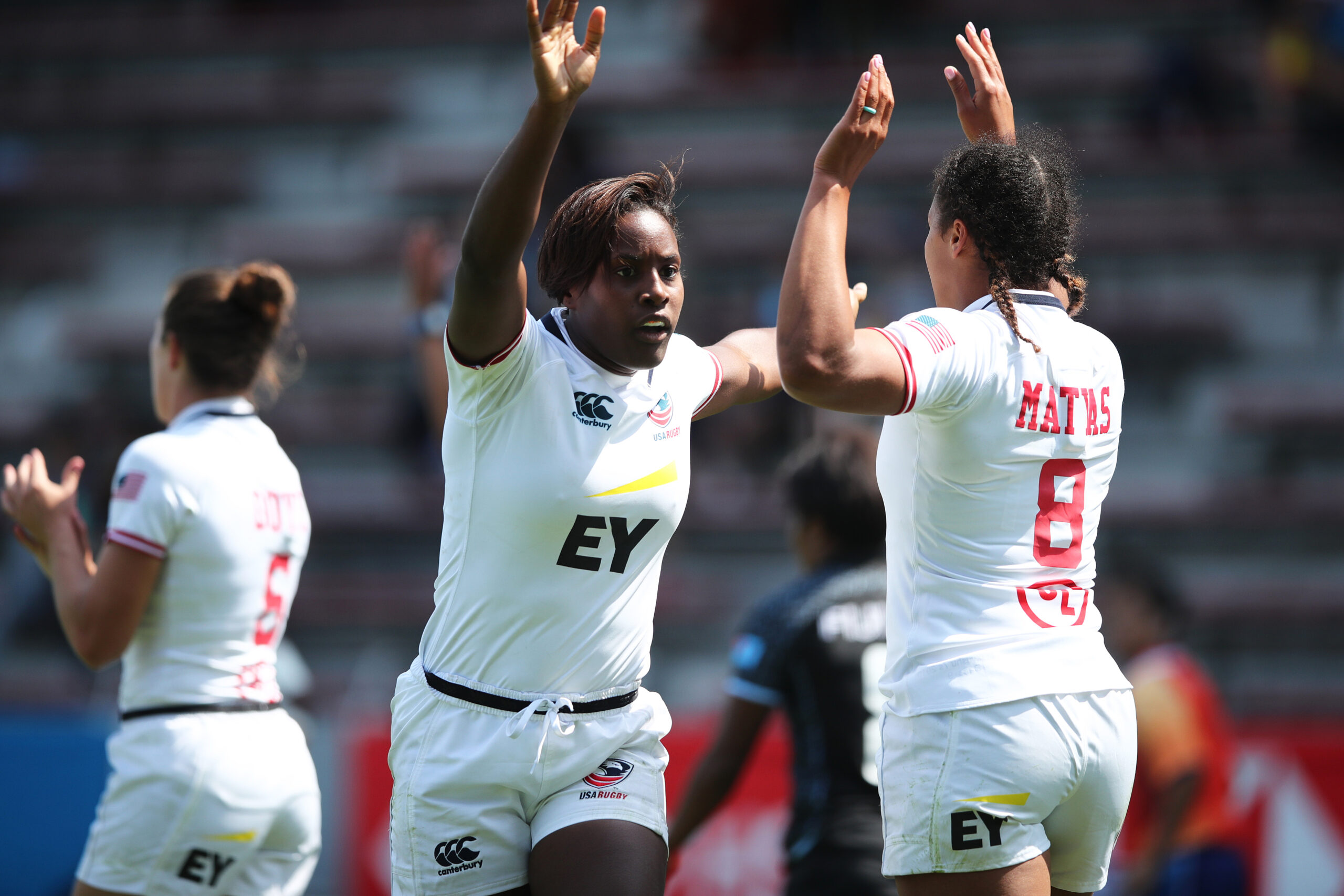 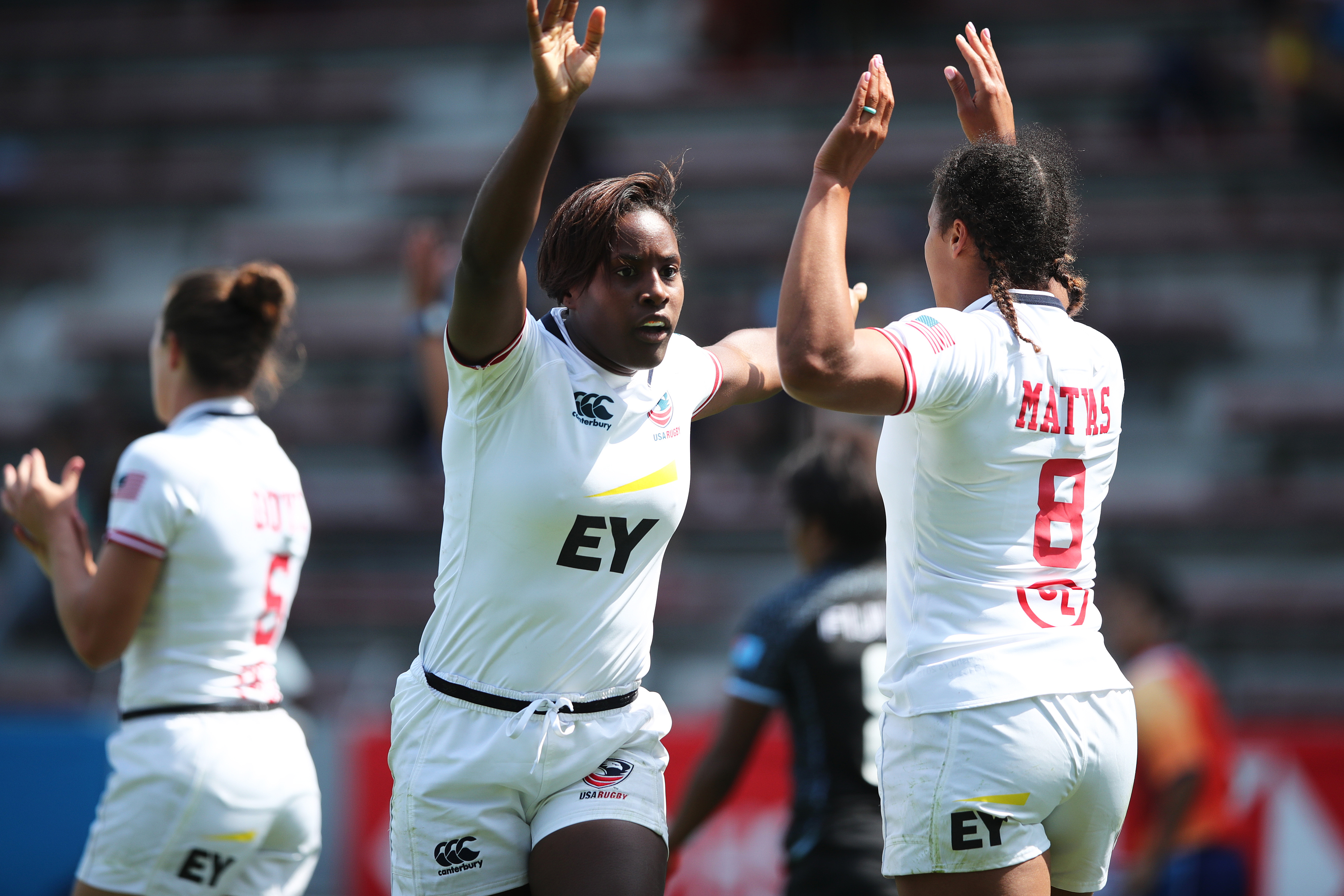 The USA is 3-0 in Kitakyushu, the fourth stop on the HSBC World Rugby Women’s Sevens Series, and takes the top seed out of the Pool C into the Cup Quarterfinals tomorrow. The Eagles will face the runner-up in Pool A at 6:52 p.m. PT Saturday.

The Eagles played from behind until the 12th minute of the match, and it was representative of the amount of the possession with which Ireland played. The USA never really settled into an offensive rhythm but did take advantage of a few key mistakes and turned them into points.

The opening kickoff went a little deeper than ideal and Ireland fielded it cleanly. Two quick penalties around the breakdown and then a kick to touch put play deep in the USA’s end. From the lineout, Ireland worked some defense-stretching phases sideline to sideline, and when Amee Murphy Crowe took the switch on the wing, she had enough room to push off the sliding defense. Lucy Mulhall converted the try for the 7-0 lead after three minutes.

Kayla Canett took the pitch and restarted play from the 50 when Ireland’s kick didn’t go 10 meters. After a few phases, Jordan Matyas timed her pass to Kirshe, who burst through the line and dragged defenders downfield. The ball then worked wide to Naya Tapper, who required two tacklers, and Canett was quick to ruck for a weak-side pick and swan dive try, 7-5.

The Eagles looked like they had another try in the works as Matyas, Kirshe and Ilona Maher all took power runs to the line, but Ireland poached the ball and returned solid phases to the 50. Alev Kelter did a good job of getting over the ball and drawing a not-releasing penalty, then returned play to Ireland’s end with a kick to touch. The lineout throw, however, went over the top, and Ireland worked it wide to Murphy Crowe, who was surely away for a try. But then Kirshe, who stood out today, went for a last-ditch ankle tap and tripped up the flyer. Ever-present Kelter was right there to get over the ball and draw the penalty.

The USA wasn’t able to turn that possession into points, and Ireland was eager to regain control after the break. The restart was knocked into Ireland’s possession and Murphy Crowe got the team into scoring position. A penalty on the five meter allowed Emily Lane to go quickly and dive over the line, 12-5.

Ireland’s kick hit the ground but the on the USA’s second attempt to bat it back toward teammates, the ball landed in Kirshe’s hands. The center curled around to assess the oncoming defense, kicked out of the first tackle and then outraced the masses for the long try, 12-10, Ireland’s lead.

A lovely restart from Heavirland allowed Kelter to fly into the air for the receipt, and then a penalty followed near the 22 meter. The next few phases saw the American opt for contact, and that tactic eventually drew a not-releasing penalty as the No. 2 was slow to the tackle. Ireland worked a lineout at its 30 meter but then a dropped pass at the center allowed Tapper to scoop up the ball and pop to Kirshe. Kelter looped around for the pass and scored down the sideline. The conversion kick hit the crossbar, 15-12 to the USA with fewer than two minutes remaining.

Ireland had multiple opportunities to overturn the scoreboard, as the USA was pinged again for not-releasing and a knock-on allowed the team to reset with a scrum. The game ended with Mulhall darting deep into the Americans’ end and Ireland scrambling to find that gap in the defense. Eventually Bizer got over the ball for the poach, got it to Heavirland, who quickly kicked to touch to end the game.

Good test for the Eagles heading into the knockout rounds. The USA awaits the results of Pool A, which saw Russia tie New Zealand to complicate standings.