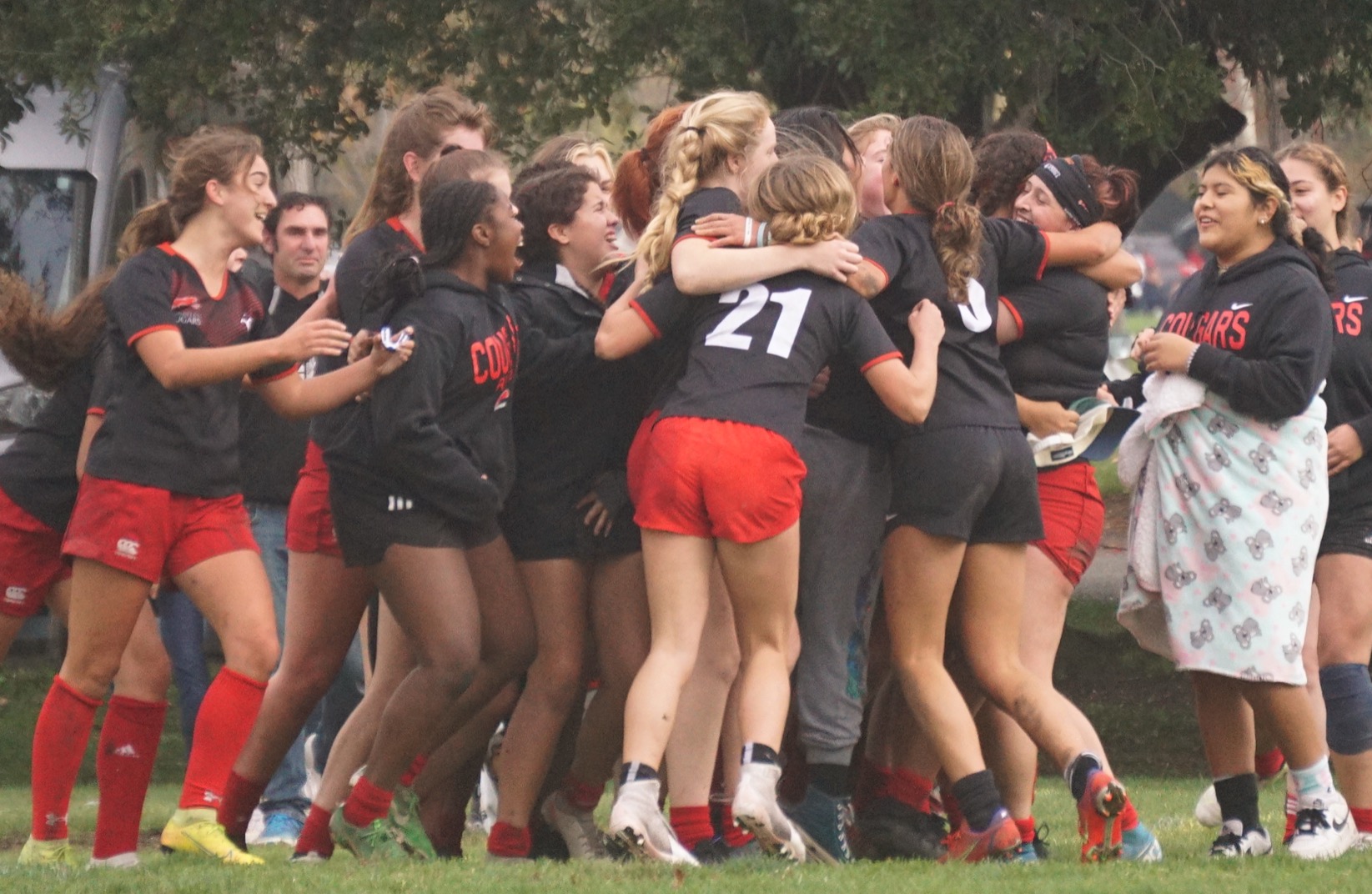 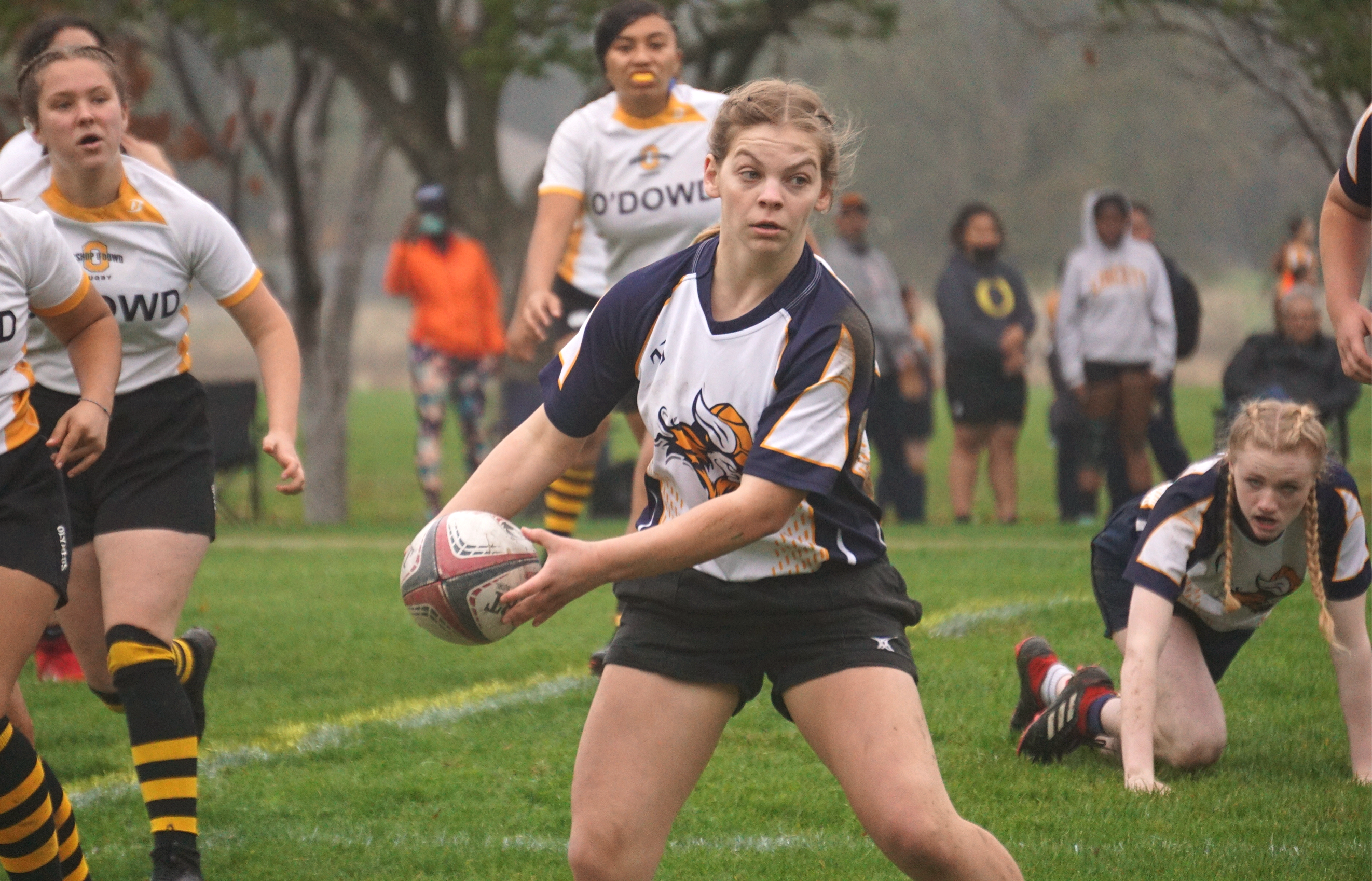 Fall 2021 marked the second year in which Rugby NorCal held a single school (as opposed to high school club) 7s season and championship. Fourteen teams attended at least one of the four regular-season events ahead of the playoffs. The Bay Area contributed more teams to the competition but teams like the Saints, River City and Laguna Creek represented the Sacramento region well. 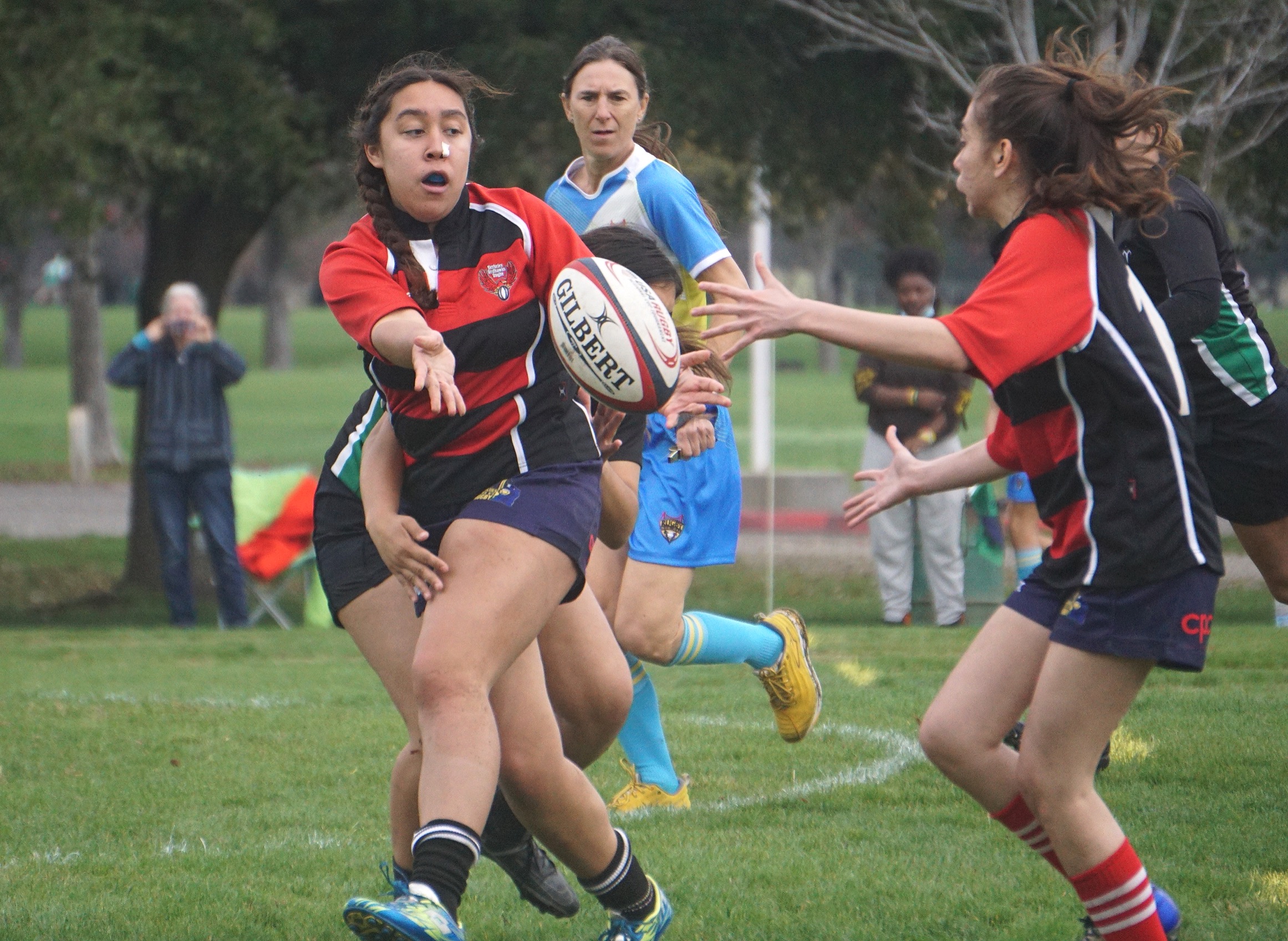 Berkeley against St. Mary’s 2nd side play in the Bowl / Photo: Jackie Finlan

On. Nov. 6, the field assembled in Danville, Calif., for a seeding tournament. Teams had played anywhere from 3-11 games and specific match-ups were scheduled so that championship rankings might be better informed. Read more. With 12 teams competing, the intent was to separate the top-eight teams in a Cup bracket and bottom-four teams in a Bowl competition. San Ramon Valley / Northgate then withdrew from the Nov. 13 tournament citing injuries, so the Cup quarterfinals included a bye to top-ranked Carondelet. 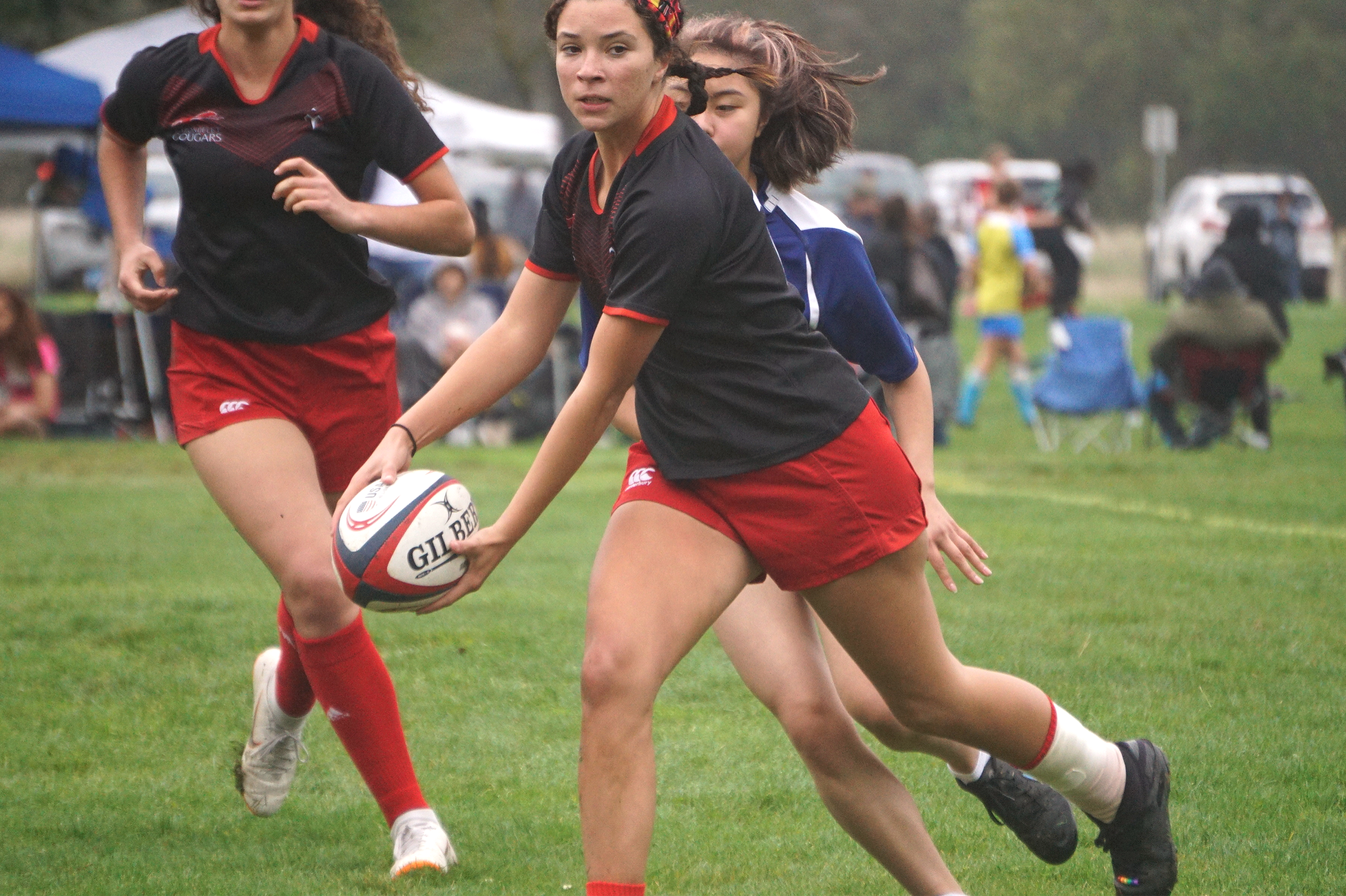 The championship started with a great back-and-forth between fourth- and fifth-ranked teams, Laguna Creek and Saints, respectively. Both hail from the Sacramento area and know each other well. Ro’Elenoa Lagilagi kicked off the scoring for Laguna Creek and Masalina Koi kicked the conversion. The duo were lights-out all day, making big tackles in the middle and covering the edges. They’re both power players but they can move. Koi also has a great dropkick, and was the best in the field alongside Carondelet freshman Amelia Bowes. 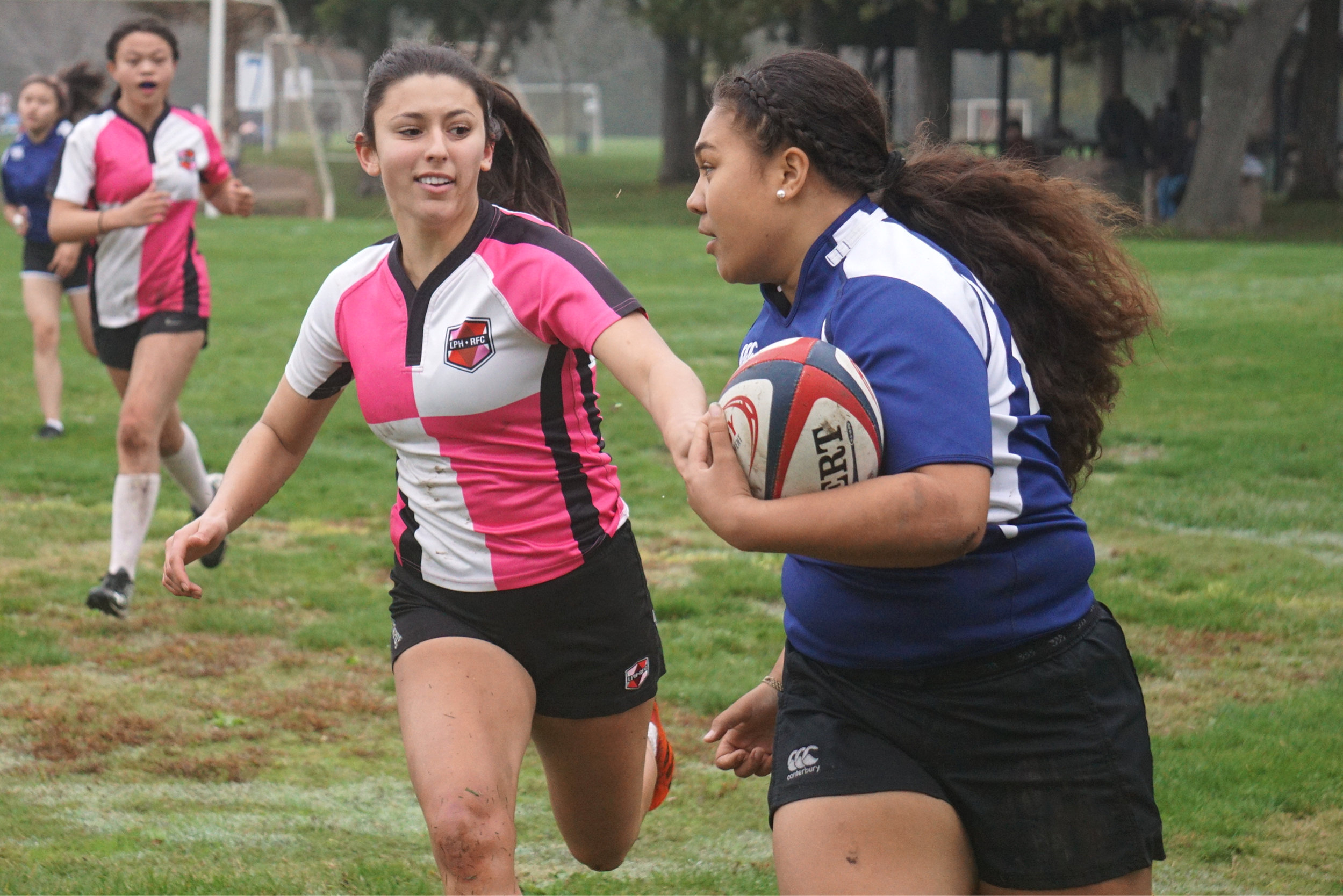 Then the Saints responded with back-to-back tries through stalwart Tohuia Kaihau and freshman scrumhalf Emily Hartman. The latter score evolved after the Saints stole a scrum deep in Laguna Creek’s end. Saints held a 12-7 lead into the break, but then Laguna Creek got ahead after Koi tore down the sideline and linked with Lagilagi. An offsides penalty allowed for quick ball movement out wide for the try: 14-12 with Koi’s extras.

The restart went out of bounds and the Saints reacted with a quick lineout. There were some big collisions in the middle of the pitch but then Kaihau found a gap for her second try. The conversion was good for the 19-14 lead. 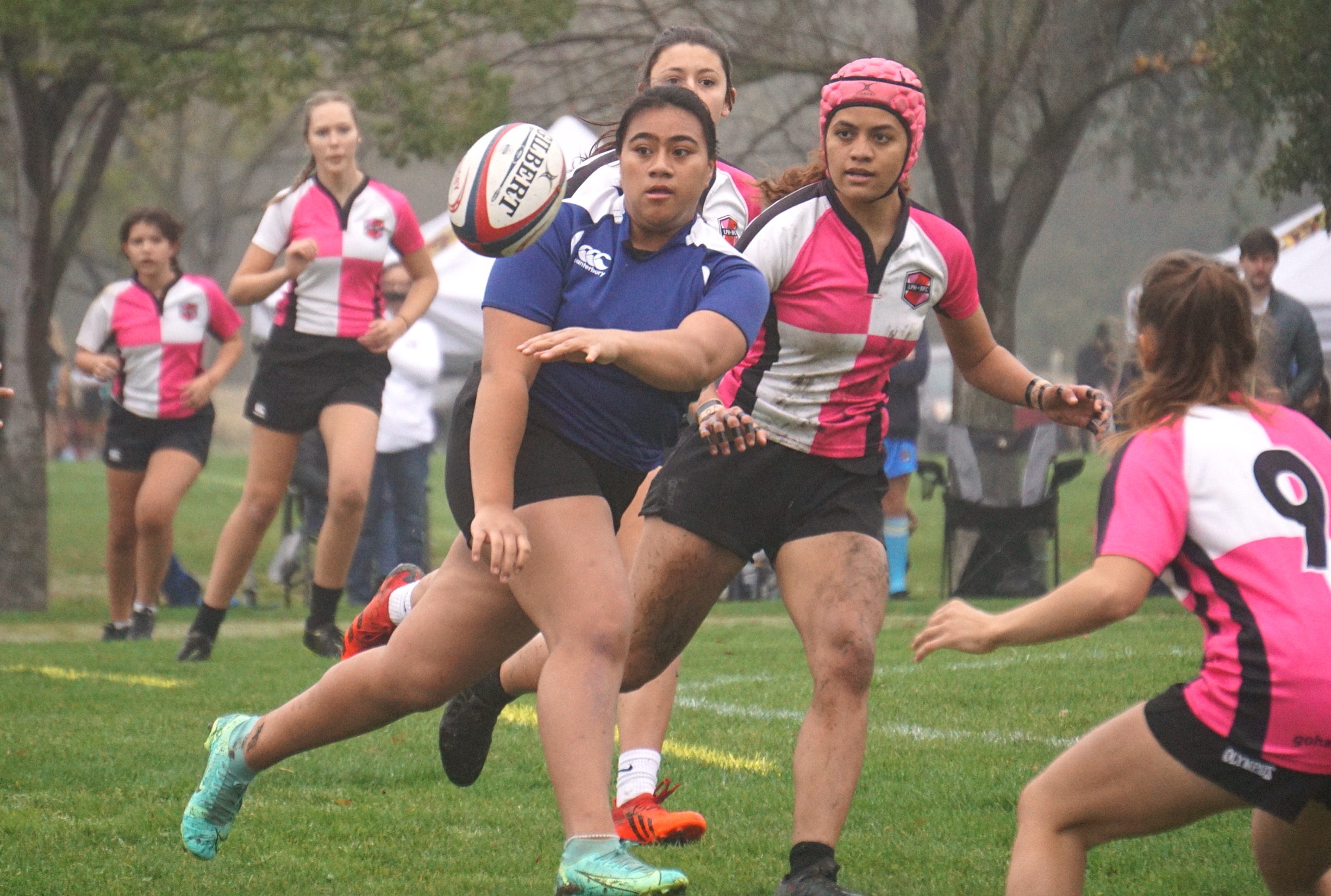 Louina Hafoka went on a long run for another lead change, and no one was chasing, so the hooker let the clock run down until a defender arrived. Koi was good with the extras and the 21-19 scoreline held through full time. Laguna Creek then readied for its semifinal against Carondelet.

On the other side of the bracket, St. Mary’s blanked Milpitas 36-0 and Bishop O’Dowd shut out River City 19-0. The two victors then met each other in the semifinals. St. Mary’s has better team speed overall, but the slippery and slow conditions challenged the team’s ball-handling and ultimately rhythm. Bishop O’Dowd was good in the tackle and reacted well to dropped balls. 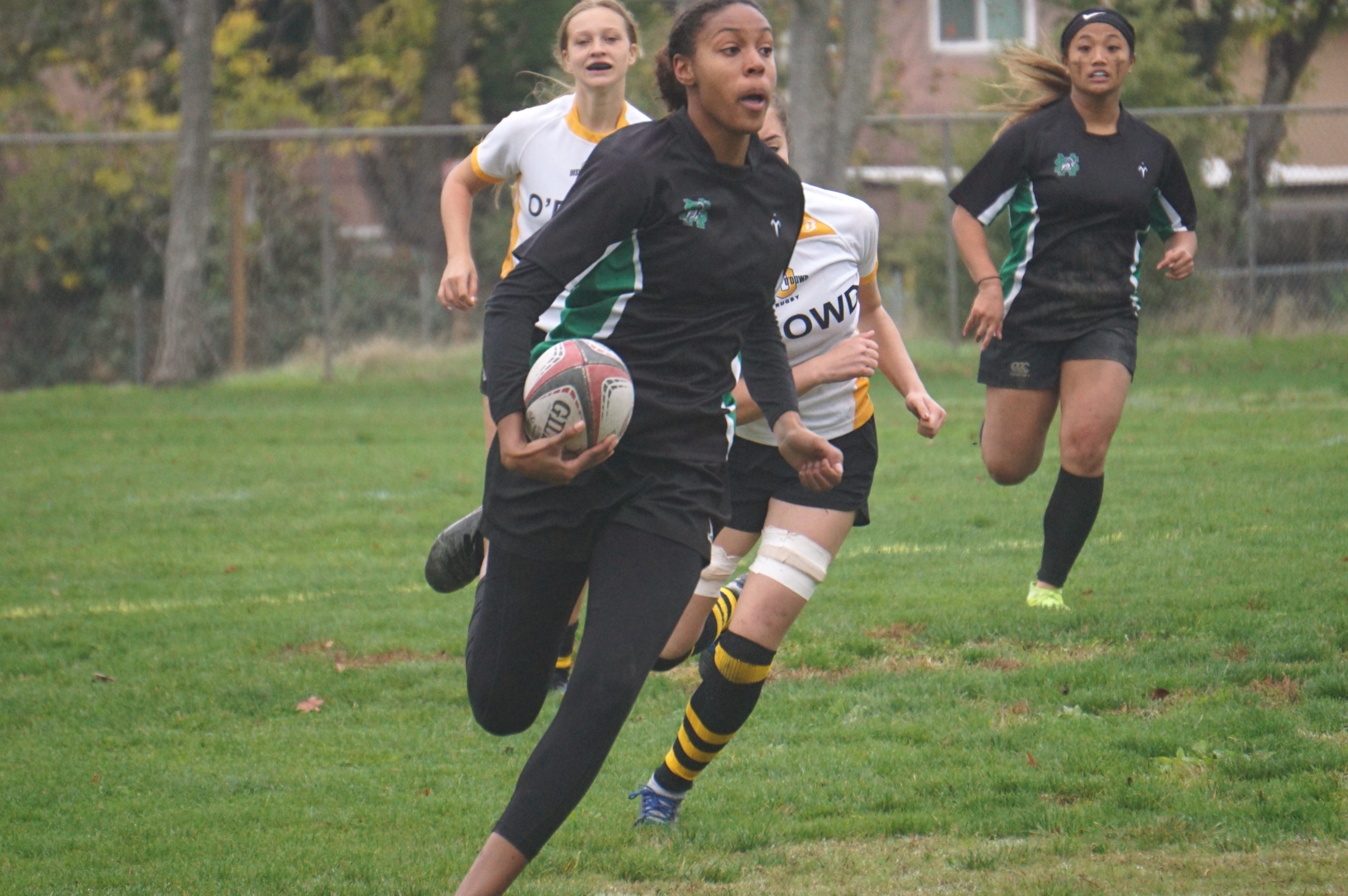 Vanessa Ortiz-Pallen led as always. The flyhalf is tough and savvy, and she scored the opening try for Bishop O’Dowd. Cam Fields then single-handedly tied it up, turning some confusion after the restart into a side-stepping, tackle-evading run and try. Sister Kori Fields added the extras for the 7-5 lead.

The Dragons have some serious around-the-corner pace that set up the team’s second try, and Ortiz-Pallen converted for the 12-7 lead. St. Mary’s has some fantastic tacklers – the Fields sister, Ryen Scott, Serina Yee – and they all have the ability to jar the ball loose in the hit. One such disruption allowed Cam Fields to stretch those long legs again for the try, which sister Kori converted: 14-12.

It looked like St. Mary’s was heading to the final but then Dragons scrumhalf Laila Hannum, who is always the first to react on either side of the ball, scored on the final play of the game: 19-14 to Bishop O’Dowd. The Dragons readied for the final. 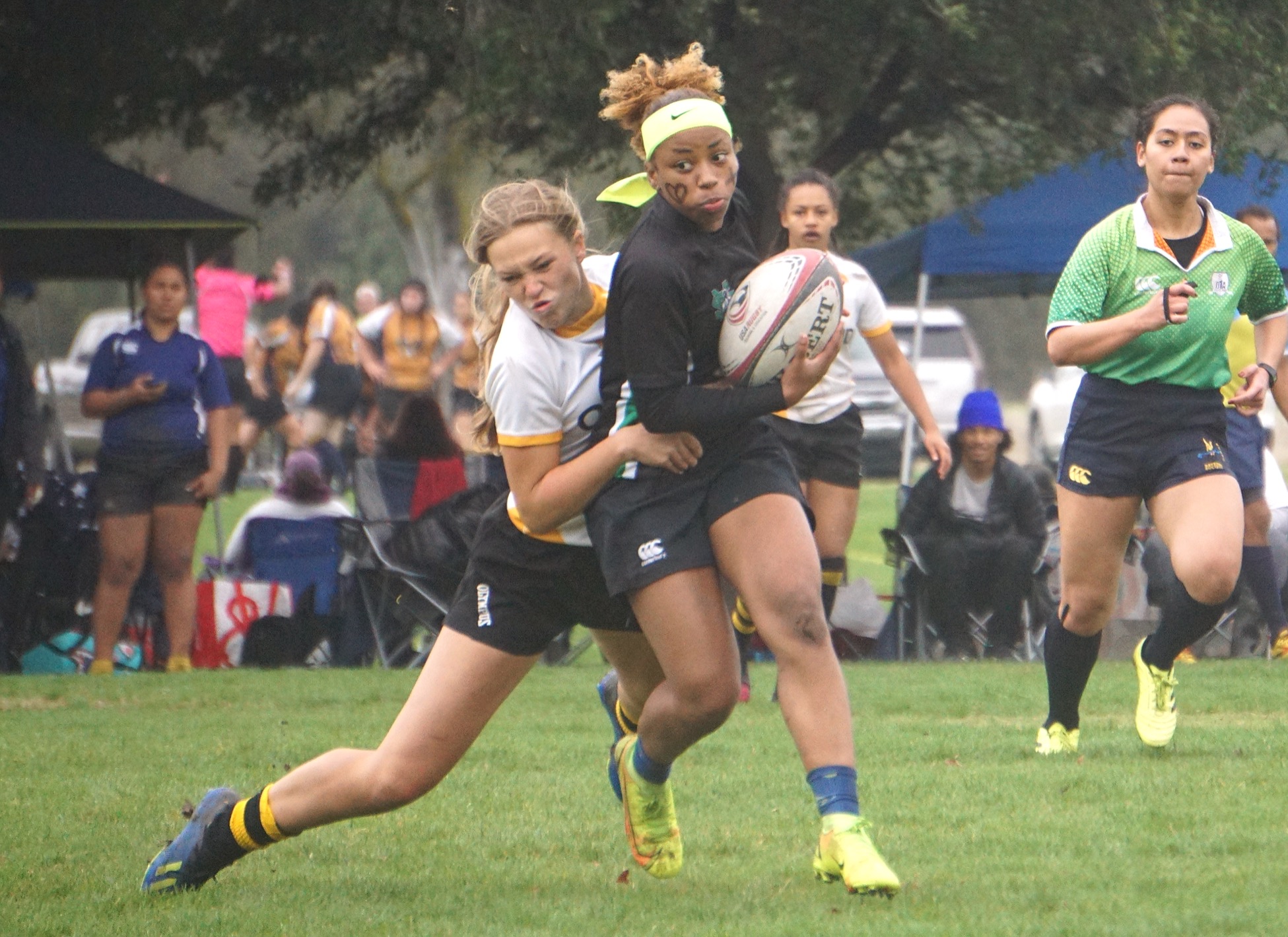 Laguna Creek and Carondelet saw each other in the Oct. 30 seeding tournament and the Cougars won that game behind relentless defense. Both sides were up for the physical game in the rematch, and neither backed down defensively. Although slow to move the ball to space, Carondelet did a better job of moving the ball on attack away from the heavy contact zones, where speed mismatches could be enjoyed.

That said, Lagilagi was the first to score and Koi’s conversion put Laguna Creek up 7-0. The slugfest ensued until Lucy Lamborn, who moved from flyhalf to wing to shore up the sideline defense, kicked the ball off the ground with Koi in pursuit. The senior captain kicked off the ground twice more and just knocked on in the pick-up. Lamborn unfortunately left the game after that stoppage, and Laguna Creek reset with a five meter scrum. An offsides penalty turned possession over and Savannah Short powered over the line for the score. Julia Jarrett’s conversion tied it up: 7-all. 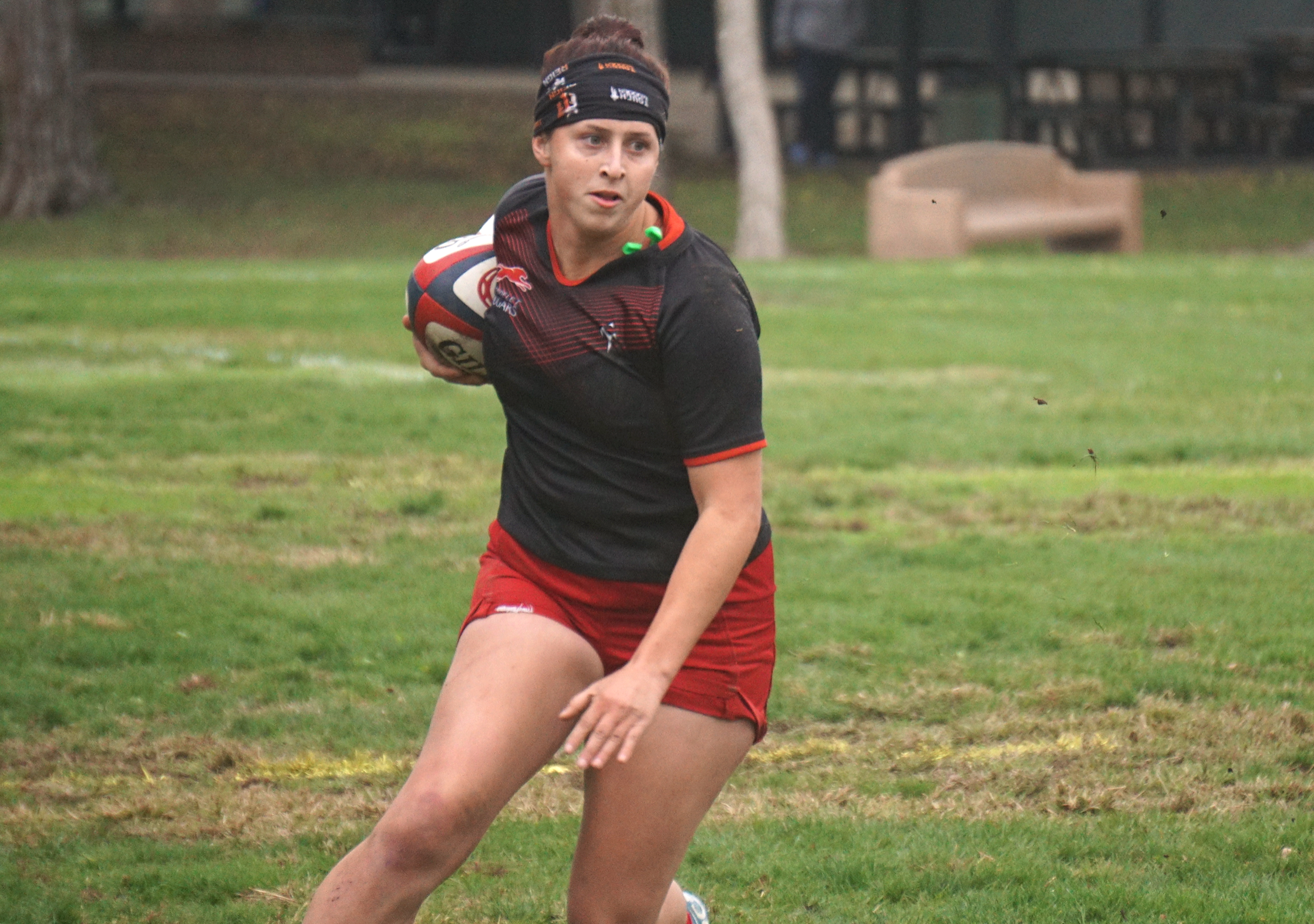 Jarrett again was so inspirational on defense. She’s up for contact
and works hard to be involved and clean up line-breaks. The scrumhalf was rewarded when a messy scrum on Laguna Creek’s five meter allowed Jarrett to simply apply pressure to the ball on the try line: 12-7 to Carondelet.

Laguna Creek returned to the pitch after halftime with renewed vigor. From the kickoff, players punched hard into the defense, retained ball, and then Hafoka struck at the right moment for a pull-away try. But the score was recalled for a yellow card penalty further up-field. That seemed to break Laguna Creek’s spirits and from the restart, Carondelet took advantage of a speed mismatch for a try: 17-7 the final. 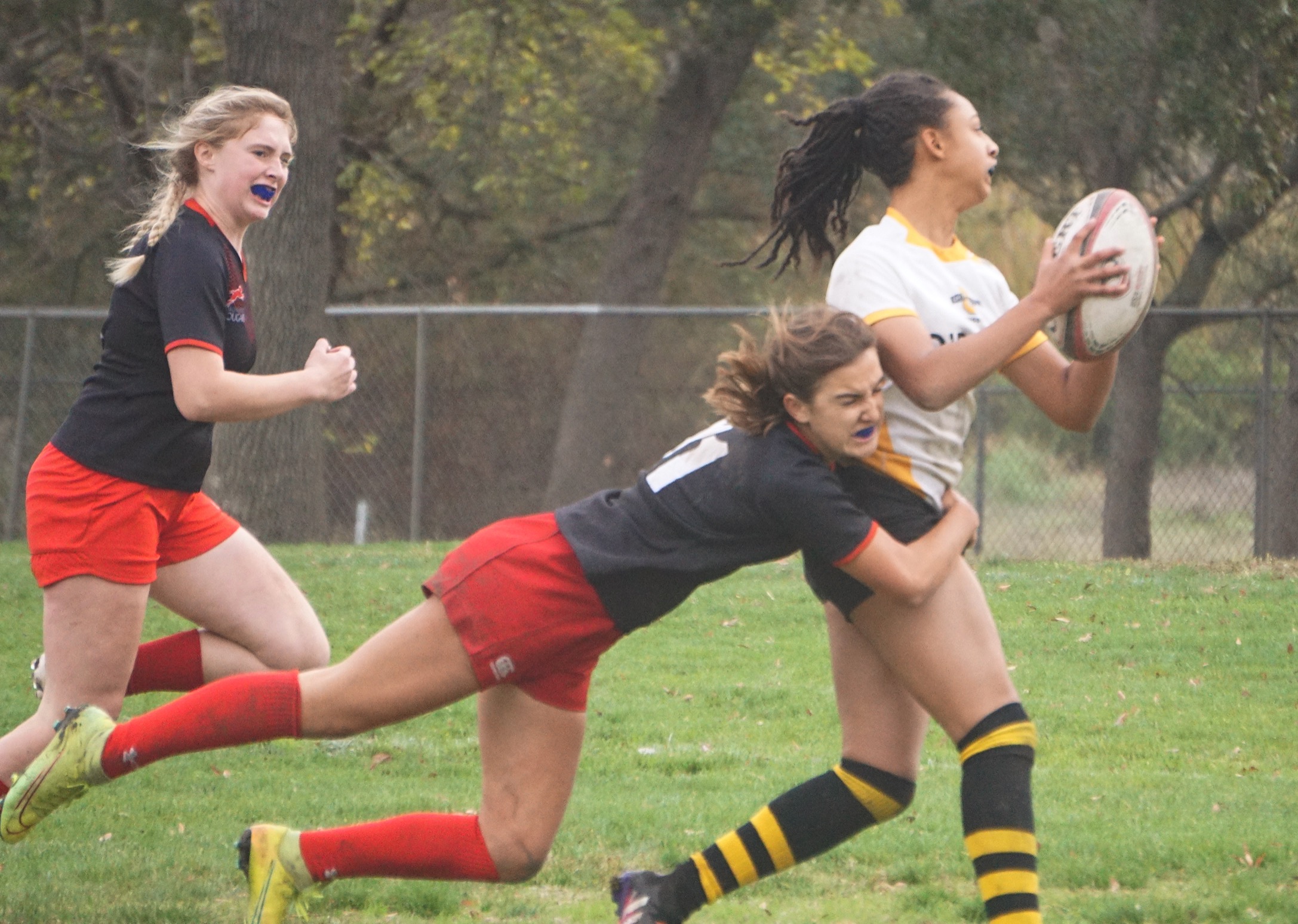 Did Jarrett make this tackle? Yes, yes, she did. / Photo: Jackie Finlan (TRB)

In the end, the top-two ranked teams met in the final: Carondelet vs. Bishop O’Dowd. While the Dragons never relented in their effort, the title match showcased the strength of the Cougars. Olivia Mazoleweski wasn’t just the fastest player on the pitch but reads her opposite so well and manipulates the defense with great footwork. She, too, is key to the pressure defense and a great gunner on kickoffs. 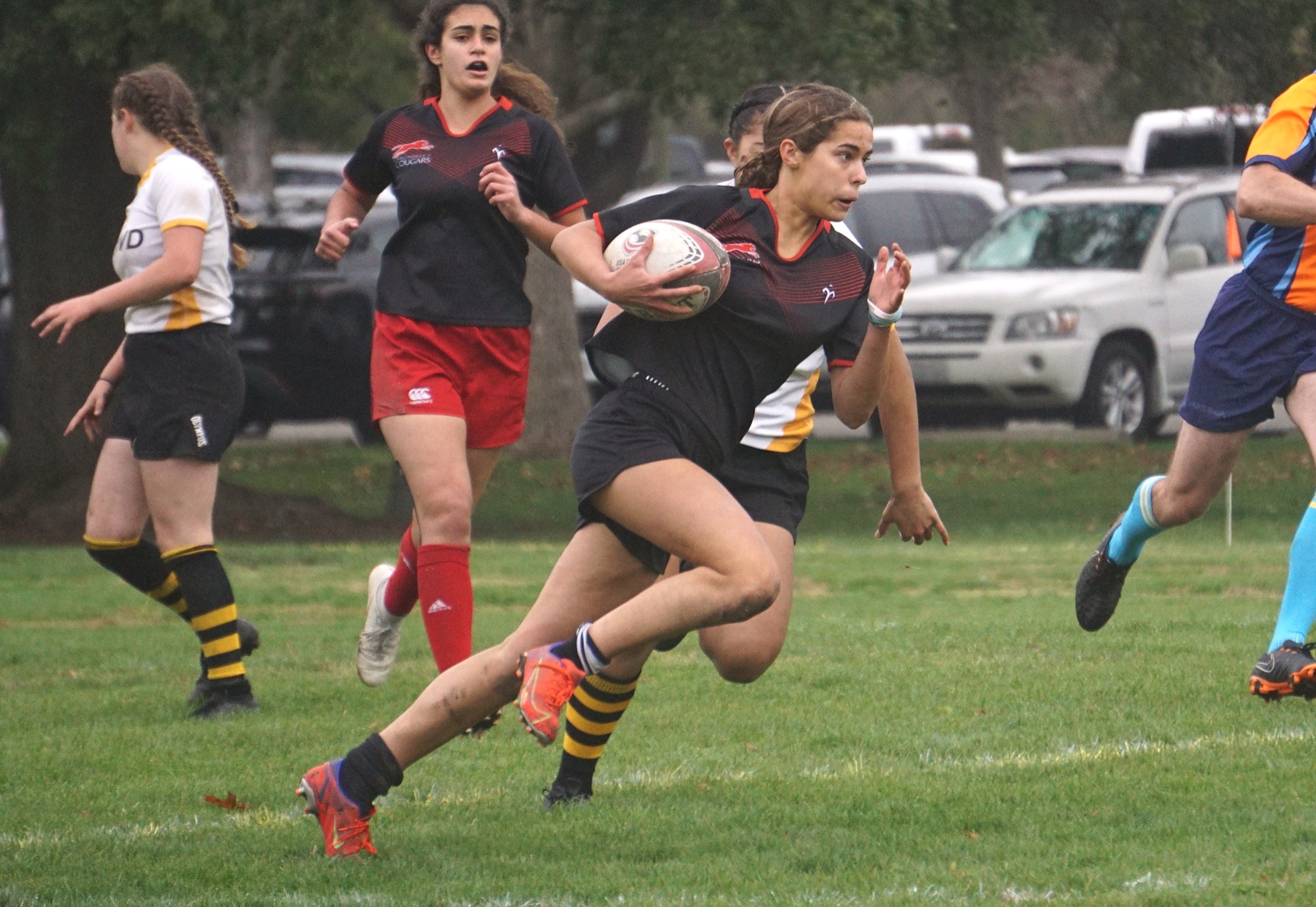 Mazoleweski cut through Bishop O’Dowd defense for the opening try, which Jarrett converted. A knock-on set up a Carondelet scrum near the 50 and Lamborn took the opportunity to power through the line for the try, 12-0. The Cougar defense took advantage of a flat attack and Mazoleweski stepped into the passing lanes for an intercept score: 17-0 into halftime.

The subsequent restart didn’t go 10 meters and Carondelet used that advantage to put Sabrina DeAraujo away, and then finished the game with a final try and 27 points. 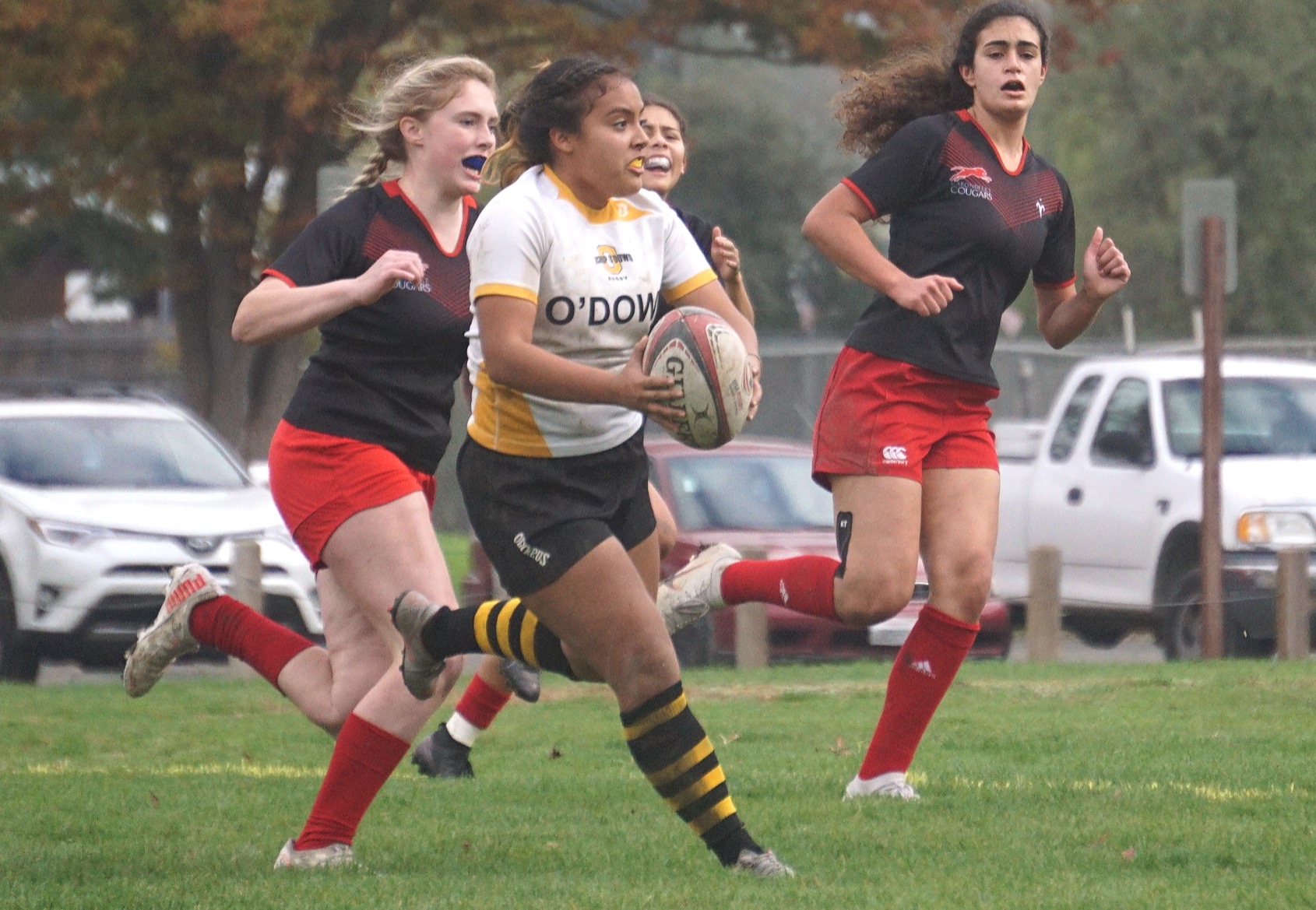 Bishop O’Dowd did put a converted try on the board but there was some frustration around the management of the back-10 on penalties. On two occasions, the Dragons went quickly from the mark and Carondelet defenders made contact within 10 meters (five meters really). Bishop O’Dowd played with the expectation that a second whistle was coming, while Carondelet kept playing until told otherwise. The Cougars turned over possession both times and scored two tries: 27-7 the final.

Carondelet was the class of the tournament and season, and had its full B side cheering on the final. The Cougars have great numbers and now they have recompense for the second place finish at the last Rugby NorCal High School 7s Championship in 2019.