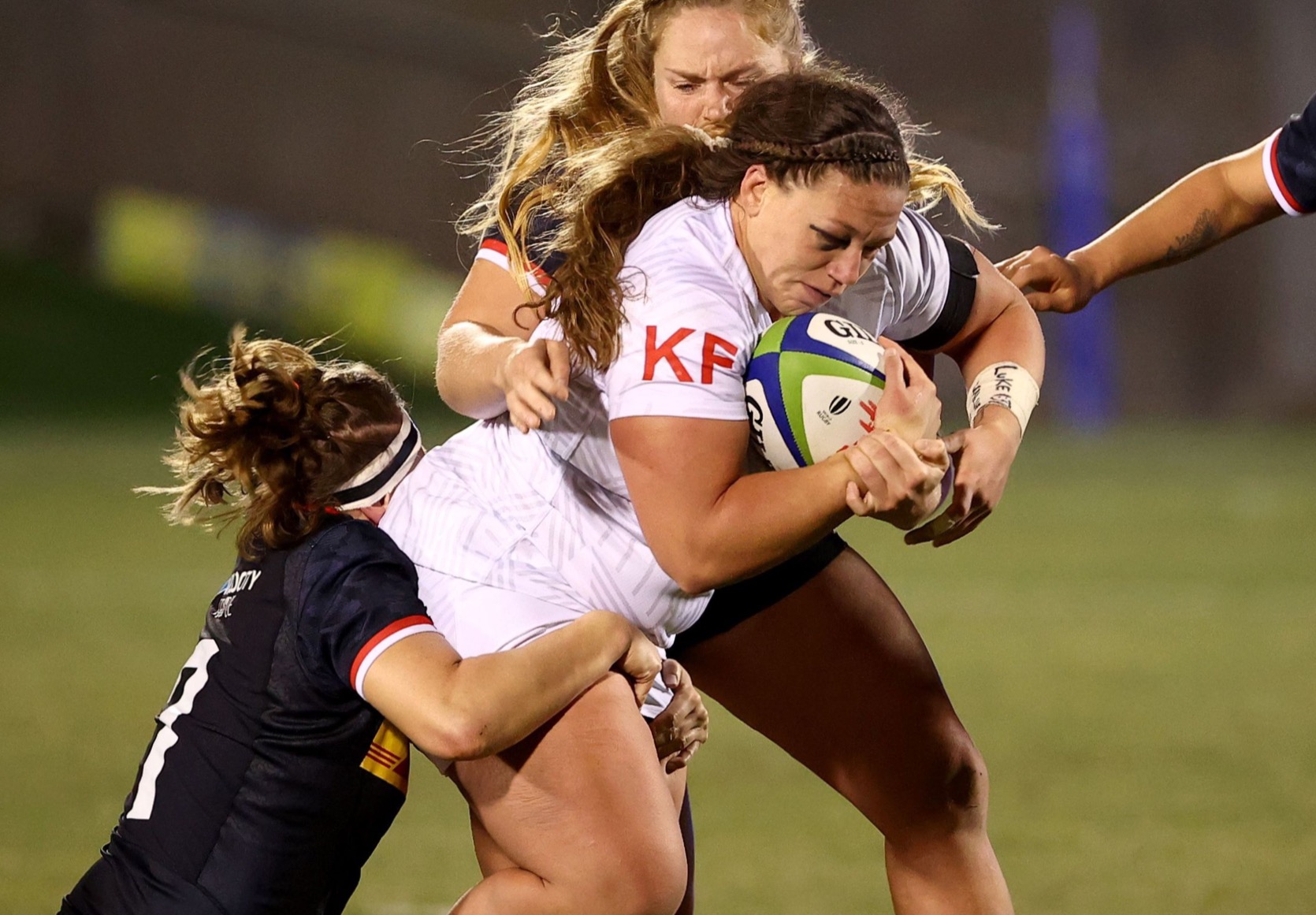 The USA Women’s National Team is 0-1 on fall tour, dropping a 20-10 decision to Ireland in Dublin this evening. The game was a much-needed victory for the host, which is still healing from its failure to qualify for the 2022 Rugby World Cup, and the fallout that followed. The Eagles will play their final fall test against England on Nov. 21.

The USA spent the opening two minutes in Ireland’s end, thanks to a knock-on after the kick-off, but the home side absorbed the attacked and turned over the Americans’ first foray in the 22. A couple of minutes later, the USA was regrouping with a mid-field scrum, and Ireland stole it against the head. Ireland dominated the set piece all game, drawing penalties and driving the Americans into retreat.

Ireland was also able to disrupt the Americans’ lineout in the first half, but locked it down in the second half, with one crucial exception. The Irish driving maul, however, was also a very good weapon all game long.

Both teams struggled with handling errors in the first half – eight to the U.S. and seven to Ireland – and that produced some stop-and-go play, and frustration. Once Ireland noted some inconsistency in kick receipts and coverage, flyhalf Stacey Flood kept the ball in the air. Fullback Kayla Canett was good under the ball and posed a big threat with ball in hand.

Ireland had issues with penalties, notably rolling away after the tackle, and that allowed the U.S. to gain territory. From a lineout, inside center Katana Howard – who was very good all evening – hit Tess Feury on a flat pass through the line, and it was a 2-on-1 with Bulou Mataitoga on the sideline. The finishing pass didn’t go to hand, and it was one of several lost opportunities for points.

Not long afterward, flanker Rachel Johnson – who was great in the #7 jersey against Canada – was charging down a Flood kick and then clutched a knee in pain before exiting the game. Bitsy Cairns came on and made good use of the field time.

Ireland was starting to build some momentum in the USA’s end when Hope Rogers popped up from the tackle and drove over the ruck, eventually setting up Alycia Washington for the turnover. Both were big ballcarriers in tight and farther from the breakdown – Rogers especially.

Two penalties and two excellent Megan Foster kicks to touch set up a USA lineout on the Ireland five meter. There were picks to the line and then Ireland prop Lindsay Peat ripped away possession. Following another penalty, Flood’s kick didn’t make touch and Mataitoga put the USA back on attack. The ball moved to Canett to Howard to Amy Talei Bonte, but the final pass to Feury wasn’t to hand. From that turnover, Ireland scored.

Ireland secured its scrum and Flood sent a crosskick into suspiciously unguarded territory. Wing Beibhinn Parsons was on the move and gathered the ball under no pressure. The wing cut across the covering defense for the try, 5-0.

The Americans responded well and were working hard to knit those fast-paced, tight offloads together. Penalties and kicks to touch set up the U.S. for a go at the line, and Rogers, Washington and Catie Benson inched the team closer. The final push came from hooker Saher Hamdan, who picked from the base then spun out of the grasp of the ruck defense. The Life University student fought over the line for the try – almost. The series was reviewed and found an earlier knock-on during one of the picks. Hamdan showed great footwork all game and continued to slip through seams.

The ref had been playing advantage so the USA restarted with a penalty on the 10 meter, followed by Foster kick and lineout. A maul ensued and then the ball spun out to the backs. Howard did a good job pinning defense and sent a miss pass past Talei Bonte on a hard under line. Canett moved the ball just before contact and Mataitoga finished for the try, 5-5.

Ireland scored right away. Carly Waters misplayed a clearance kick from Flood, setting up a lineout, good driving maul and subsequent collapsing penalty. Once five meters out, the team went to the pick-and-go game and eventually put Leah Lyons over for the try, which Flood converted: 12-5 into the break.

The USA closed the gap quickly after the break. The Eagles linked some fast phases together, and Rogers caught the defense off guard, looping around the breakdown and taking the pass with space and momentum. A nice offload to Bonte was the preamble of things to come. The ball went the other way to Washington, who fed back inside to Feury, to Foster, Canett and Howard, then Cairns – all at electric pace. The flanker had just enough to get over for a confident, boosting try. The score was in the corner, like the first try, and as Foster started her movement toward the tee, the Irish defense rushed up and nullified the attempt.

Right away, Ireland was back in the USA’s 30 attacking. Even after Peat knocked on the switch, the Irish drew a penalty on the USA scrum. A five-meter lineout followed and Mataitoga was yellow-carded for collapsing the maul. The repeat lineout put its maul across much more easily, and Peat dotted down the score, 17-10.

Captain Kate Zackary nearly scored after a line-break to the two meter, and then Cairns was held up diving across the line. A Foster chip landed in Canett’s hands and the fullback carved through the middle of the field. She hit Feury out wide and the wing side-stepped the first defender and had another come with her to the line. The call was a knock-on at the line, but the video review – which neither the center ref, assistant ref or Zackary requested – showed there was a good case for downward pressure on the try line. Suffice to say, one of the Irish commentators was livid.

Had Feury’s try been counted, it would have been at best 17-17, and perhaps that would lift the team’s performance even more. But the Americans played with a lot of ball in the middle of the second half and just weren’t getting the payout on the scoreboard. Some of that was simple mistakes – back-to-back passes that hit the ground and allowed the defense to swarm – and some was decision-making. Ireland kept a Howard penalty kick in play but the chase was on and the home side was under pressure. Flood kicked away, but not very far, and Canett fielded the ball well. The fullback connected with Sarah Levy, who did make ground in the interior, but the better option was the four teammates lined up outside and with little opposition.

Either way, it was Ireland that added more points to the board. The U.S. descended into penalties and an offsides infraction in front of the posts allowed Flood to add three more points: 20-10 the final.

The Eagles have one more match to cement some gains this tour, and it occurs against the number-one team in the world.