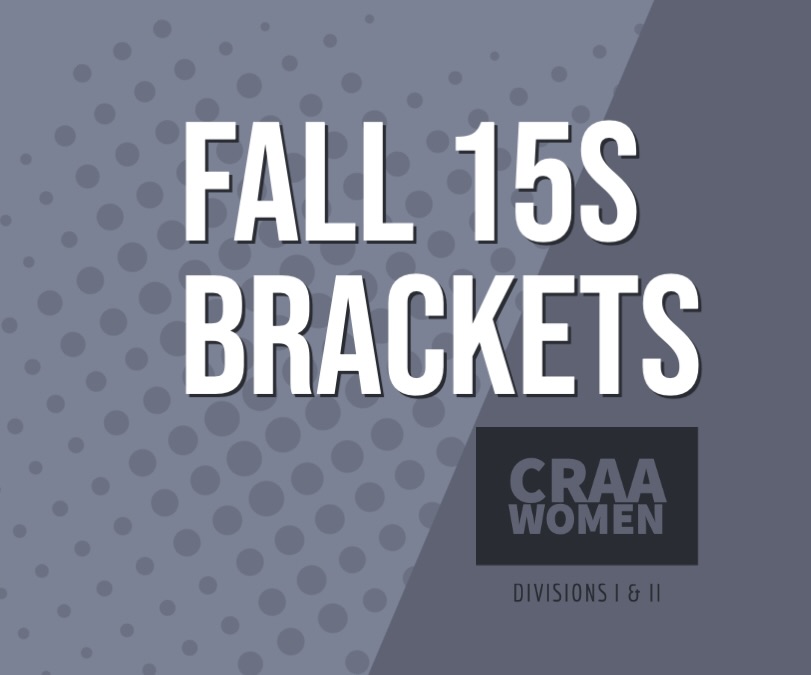 The College Rugby Association of America (CRAA) has released brackets for its Women’s Division I and Division II Fall 15s Championships. Some locations have been announced, so further updates remain. Fall champions will be named the weekend of Dec. 3-4 in Charlotte, N.C.

For Division I, it’s a three-stage playoff series: semifinal play-ins (aka, Wild Card round) on Nov. 12; semifinals on Nov. 19 (U.S. Naval Academy, Annapolis, Md.); and then the fall final on Dec. 4.

There are two conferences – Rugby Northeast and Rocky Mountain – and two independent teams vying for those playoff spots. The conference champions receive an automatic berth to the Nov. 19 semifinals at Navy, and their opponents will be determined on Nov. 12, when the conference runners-up host the independent teams.

The big surprise here is Virginia Tech, a pillar of the spring-based Blue Ridge conference. In fact, the Hokies have featured in the previous two DI spring 15s championship finals. Now Virginia Tech is taking an at-large berth to the semifinal play-ins and will travel to Rugby Northeast’s runner-up on Nov. 12.

Who might that be? Most likely Northeastern or UCONN, the leaders in the Rugby Northeast. The conference names its champion on standings, but the Oct. 29 league game between Northeastern and UCONN will feel like a final.

Navy is the reigning CRAA DI Fall 15s Championship titleholder, but as an independent team, it must play into the semifinals, too. The Midshipmen will fly to the Rocky Mountain runner-up on Nov. 12 for an opportunity to play at home on Nov. 19.

Utah State is undefeated in Rocky Mountain, but still has Colorado and Colorado State to play. It beat Air Force 40-12 last weekend, and Air Force beat both CU and CSU. Champion is named on standings, so the assumption at this point is: #1 Utah State, #2 Air Force. If that finish plays out, then Utah State is booked for the semifinals, and a long-awaited Air Force vs. Navy match will take place in Colorado Springs on Nov. 12. These two service academies have had friendlies scheduled in the past, but travel restrictions have canceled them the last few years. So it would be great to see these two teams play each other finally.

Division II includes five conferences and has a four-stage post-season beginning with Nov. 12 play-ins. The fall quarterfinals and semifinals will be Nov. 19-20, and then the final is the first weekend in December.

The Mid-Atlantic, New England Wide, Rocky Mountain, Rugby Northeast and Tri-State conference champions receive automatic berths to the Nov. 19 quarterfinals. Rocky Mountain will also send its runner-up to the quarterfinals, as the league is logistically isolated from the Northeast-based conferences and a play-in would be too much.

That means there are two quarterfinal vacancies – the perfect number for the four conferences’ runners-up to duke out Wild Card games Nov. 12. Check out the graphic for specific match-ups. The following is an Oct. 13 update on where each conference stands:

Mid-Atlantic – Bloomsburg, Kutztown and Temple are the teams winning in the Pennsylvania-New Jersey-Delaware region. The conference has always held a semifinal/final weekend to name its champion and post-season reps, and per the EPRU referee website, it’s scheduled for Oct. 29-30.

New England Wide – Conference championship is penciled in for Nov. 5 and will very likely be the season’s third meeting between Vermont and Coast Guard. UVM won the first outing 18-10 at home, and the Bears host the rematch this Saturday. [Update: UVM won the rematch 21-20.]

Rocky Mountain – The reps are known – Colorado School of Mines and Colorado Mesa State – but the order will be determined Oct. 29 at the conference championship. The Orediggers beat the Mavericks 65-29 during the regular season.

Rugby Northeast – The league will name its champion and runner-up via standings (check out the latest results on Instagram), and games are scheduled through Nov. 6. Providence College is undefeated (read more). Looking at the UMass Lowell vs. Wheaton match on Oct. 29 as a potential decider for the second berth.

Tri-State – Conference does a good job of maintaining public records, so here’s the current standings as of Oct. 11. League quarterfinals are Oct. 30 (higher seed hosts). Higher seeds will host their semifinals on Nov. 5, and then higher seed will host final on Nov. 6. The expectation is a conference title match at Vassar.

There are some locations that need filling in, but it’s the DI Elite post-season structure on which we’re waiting. DI Elite is a CRAA competition, which has moved its championship 15s season from the spring to the fall going forward. There will be semifinals (1 v 4, 2 v 3) on Nov. 19, and in recent years, the higher seed has hosted that semifinal. That hosting format might change this year, but that update is pending.