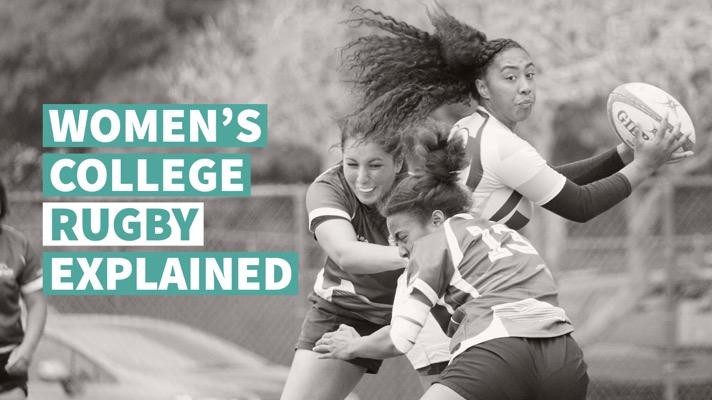 It’s important to note the publish date of this article – Sept. 21, 2022 – because defining the women’s rugby college space is an on-going process. The sphere is malleable, and without getting into the whys and wherefores, the following seeks to bring some clarity to the organization of women’s college rugby in the U.S. [Value this type of work? Then consider subscribing to The Rugby Breakdown.]

There are three organizations that oversee sectors of women’s college rugby:

Don’t get hung up on divisions. Outside of NIRA and NCR’s Small College competition, the division to which a team belongs can be arbitrary. NIRA members adhere to NCAA divisions. The top non-NCAA varsity programs have their own DI Elite competition. But the majority of women’s college teams are club sports programs, so they’re not beholden to enrollment requirements (again, except for NCR Small College) or NCAA alignments. Generally, teams can play up and down a division based on their relative strength, but none of them can be forced per se into a division.

NCR and CRAA have men’s college components, which are not covered here (or on TRB generally). Looking for men’s college information? Check out www.goffrugbypreport.com.

Women’s rugby is an NCAA Emerging Sport, and teams enjoy the full benefits of being a varsity program at their respective institutions. Once there are 40 programs nationwide (there are currently 30, 28 of which belong to NIRA), women’s rugby can start the application process for full NCAA championship status. [Read more for additional NIRA FAQs]

NIRA’s championship season is in the fall, and it holds D1, D2 and D3 15s national championships in November. D1 and D2 teams can also compete in the USA Rugby-supported R7CC in the spring. For new and developing programs, there is a provisional division that allows for non-15s games and competition outside of NIRA, but no 15s post-season. The NIRA website is a great resource, but it’s currently under construction. So start with this piece and then reference the NIRA homepage in the near future.

The organization covers teams and leagues from Texas to Maine to Georgia, and everywhere in between. There are independent members, like Boise State, but generally speaking the West Coast and Rocky Mountain regions, and pockets on the East Coast and South, belong to CRAA.

The site does a good job sorting leagues and members, so we won’t regurgitate it here. Note that there are also hybrid leagues, which are necessary for logistics. In hybrid leagues, teams can compete against each other regardless of division, the games count toward post-season eligibility, and teams separate into different pathways come playoffs.

The CRAA website is not a great resource yet in terms of knowing which teams are its members. TRB has restarted rankings to give some shape to the competitions. [NCR produces its own coaches polls.]

The top layer is DI Elite, which includes Central Washington, Life Univ., Lindenwood Univ. and Penn State. Its 15s championship has moved from the spring to the fall this season.

In the fall, DI includes the Northeast and Rocky Mountain conferences (and this is Navy’s final year in the competition). It will name a 15s champion in early December.

In spring DII, it’s Capital (Maryland, Virginia, Washington, D.C.), Carolinas-Georgia, Florida and the Pacific Desert conferences. As of spring 2022, the West Coast (NorCal and Reno, Nev.) had not chosen a member organization yet, but it’s a spring-based 15s competition.

TRB isn’t a big fan of rankings but it’s the easiest way to see which teams are competing where and toward what championships. TRB has restarted CRAA rankings, and NCR produces its own coaches polls.

TRB also tracks weekend scores here. Results are divided into leagues and indicate NIRA, NCR or CRAA, so these posts also help with the sorting process.

Also, TRB maintains championship brackets every year, and collates them into one spreadsheet. Toggling through the tabs helps understand how the country is organized. See the 2021-22 brackets for reference. The document is sorted by championship date.

If you’re feeling confused, then you’re not alone. Every new season is a whole new discovery process of which teams are playing where, because there is a lot of movement. But it’s also why TRB is important. There is no one place where all of the information for all of the women’s colleges exists. We trod through the details every season and attempt to bring clarity to where there is none. Consider subscribing to TRB if you value this type of work.