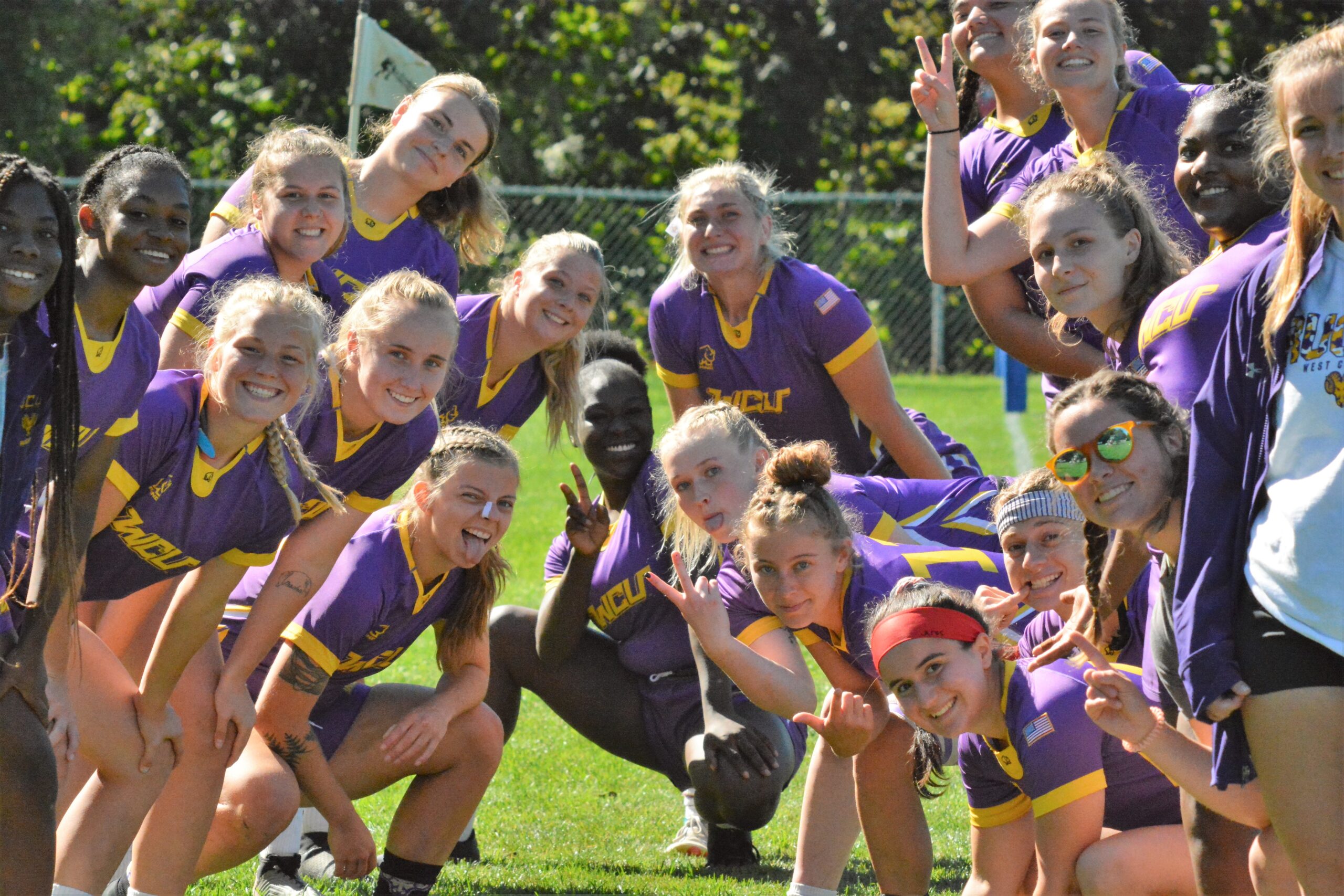 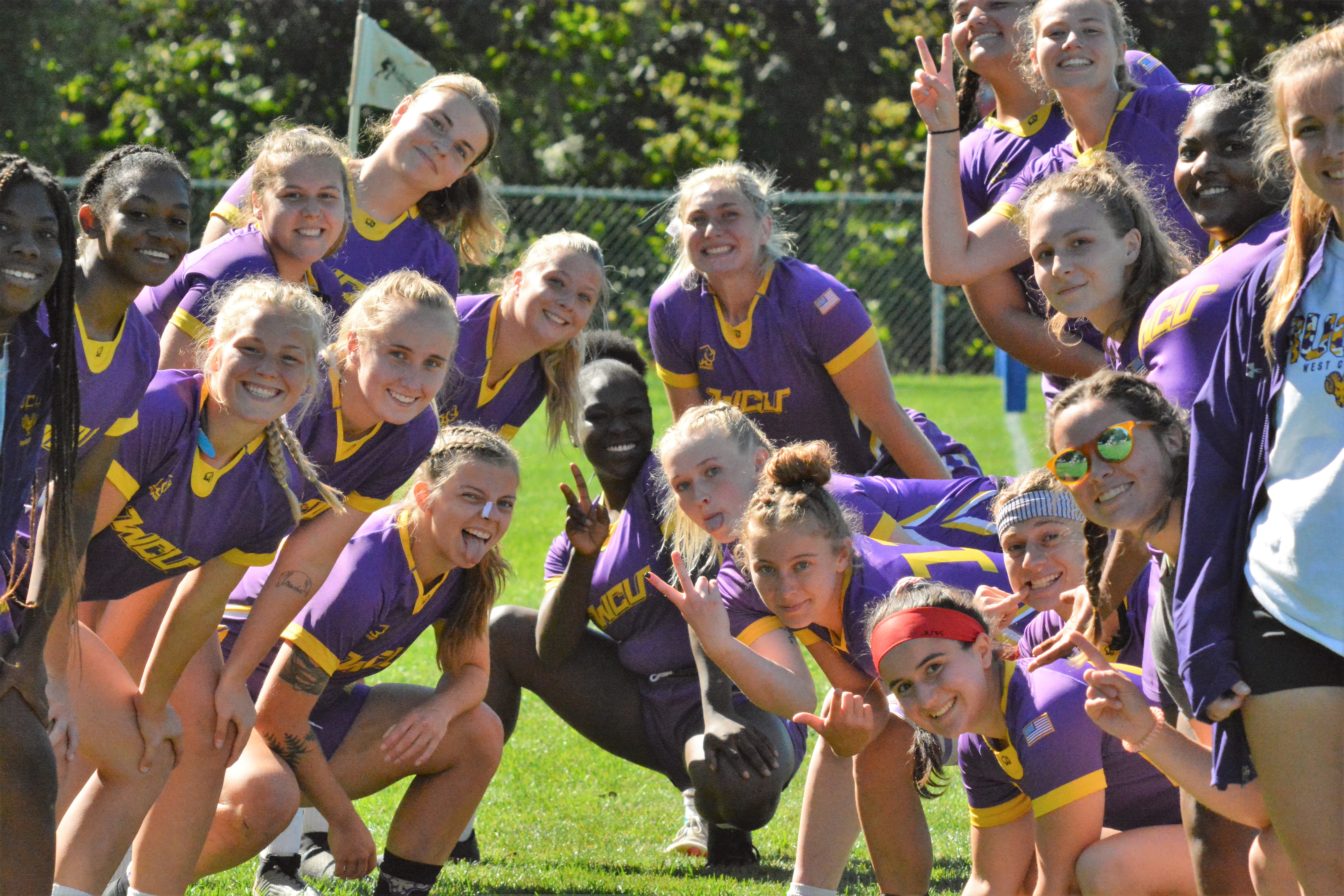 West Chester University is three games into its fall schedule but has not played a DII National Intercollegiate Rugby Association (NIRA) conference game yet. That’s not atypical in DII this year, as several programs are (re)building toward 15s numbers. That just means teams like West Chester, Queens and AIC and need several non-NIRA games to fill out their schedules. Last weekend, the Golden Rams hosted Navy in a game that tested both teams’ resolve, and also stoked enthusiasm for the challenging season ahead.

West Chester won the 2019 DII NIRA national championship, and then a year-and-a-half elapsed before the team could retake the pitch in spring 2021. As the team emerged from the playing hiatus, it struggled to string more than two weeks of training together, as Covid-19 protocols chopped up the season. The team wasn’t lifting either, because it didn’t want to chance shared facilities with other sports teams. Fitness and strength-and-conditioning levels struggled, and West Chester went 0-4 in the spring. 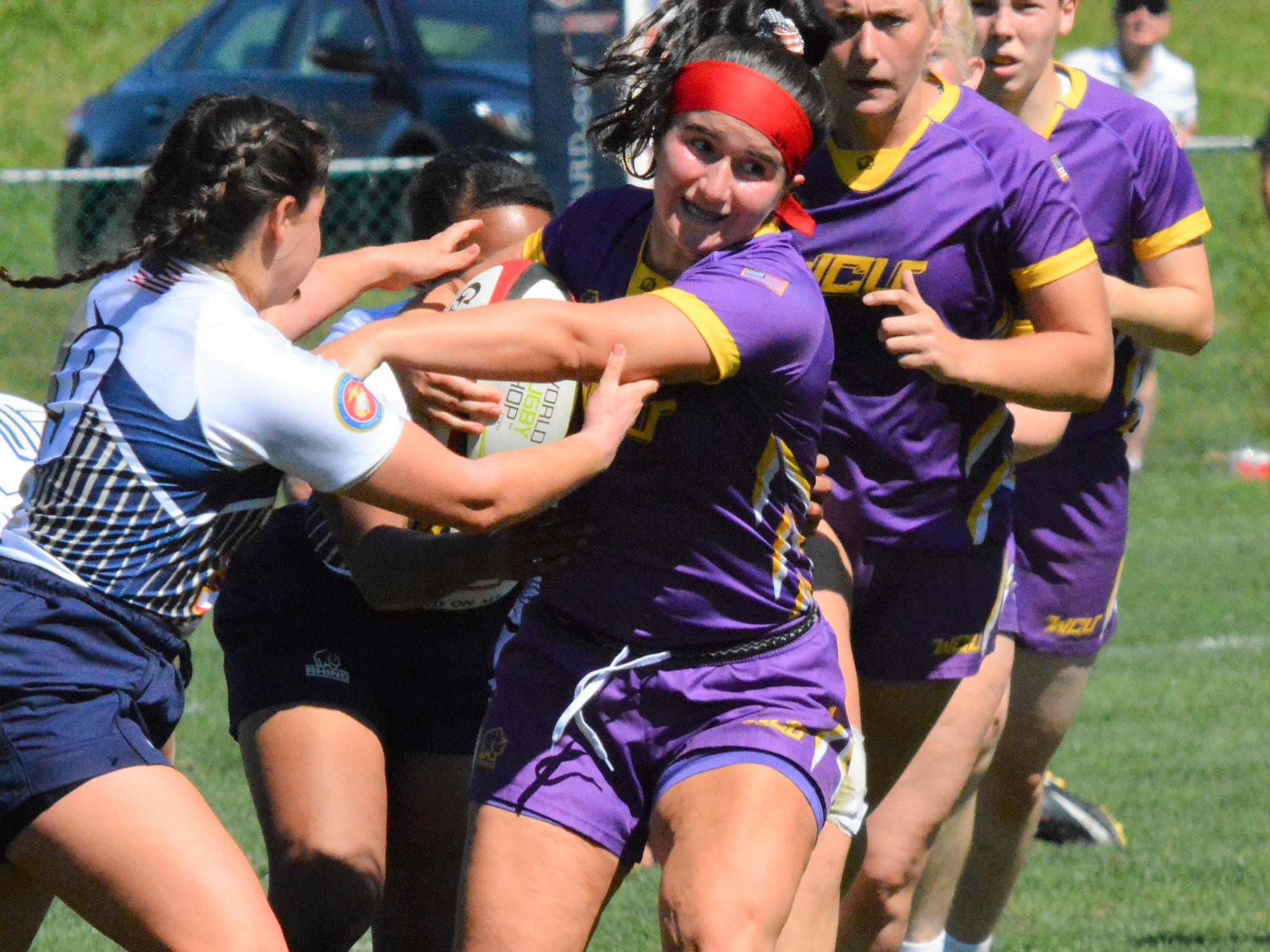 “We weren’t looking for wins and losses in the spring – that wasn’t on our minds,” West Chester head coach Tony Deremer said. “Our goal was to be together and just play again. But when you get out there and play, and you do lose, you do care. It’s hard as athletes and as a coach to lose, even though that’s not what we were trying to achieve last spring.”

It just wasn’t the experience West Chester was looking for coming out of the hiatus, and especially after going 11-0 in its previous season. Fortunately, the team has good player leadership.

“Our last game of the spring was against Mount St. Mary’s and that was a tough game,” Deremer said. “Afterward, our captain said, ‘Hey, we’ve got to pull it together because this is not happening in the fall. Come back fit and focused and ready to go to play for the conference championship.’” 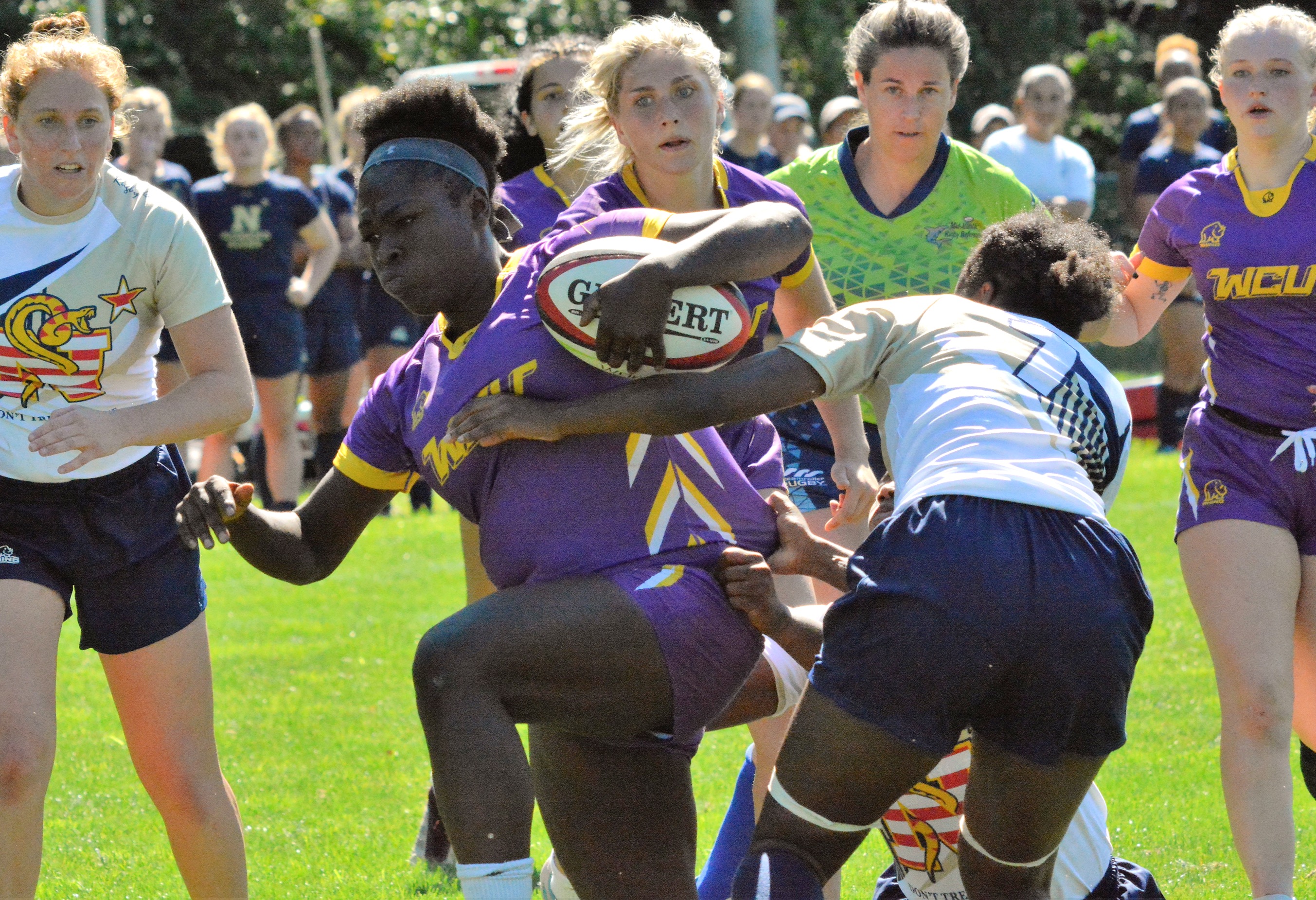 Senior captain Bayla Schindledecker and junior captain Julianna Aliprandi, who both have high school rugby experience, motivated their teammates, and everyone held each other accountable to their summer workouts. There was good energy flowing into the fall season, and Deremer scheduled a couple of non-league games to salve some of the disappointment from the spring.

“It was nice to have those extra friendlies to get the team gelling again,” Deremer said of games against Univ. New England, Colgate and Navy. “A couple of wins have been great and it’s motivating. When you’re losing, there’s a different dynamic on the team. You want to turn the game around but people argue, get on each other. When you’re winning, it’s a whole different dynamic on the field. It’s good to go up a couple games before the season.”

West Chester defeated UNE 85-7, Colgate 89-7, and then readied for Navy at home.

“We talked all week about how Navy was going to be physical, fit and strong – they’re

Navy,” Deremer said. “But we were ready for it. Although I don’t think we expected it to be that close.” 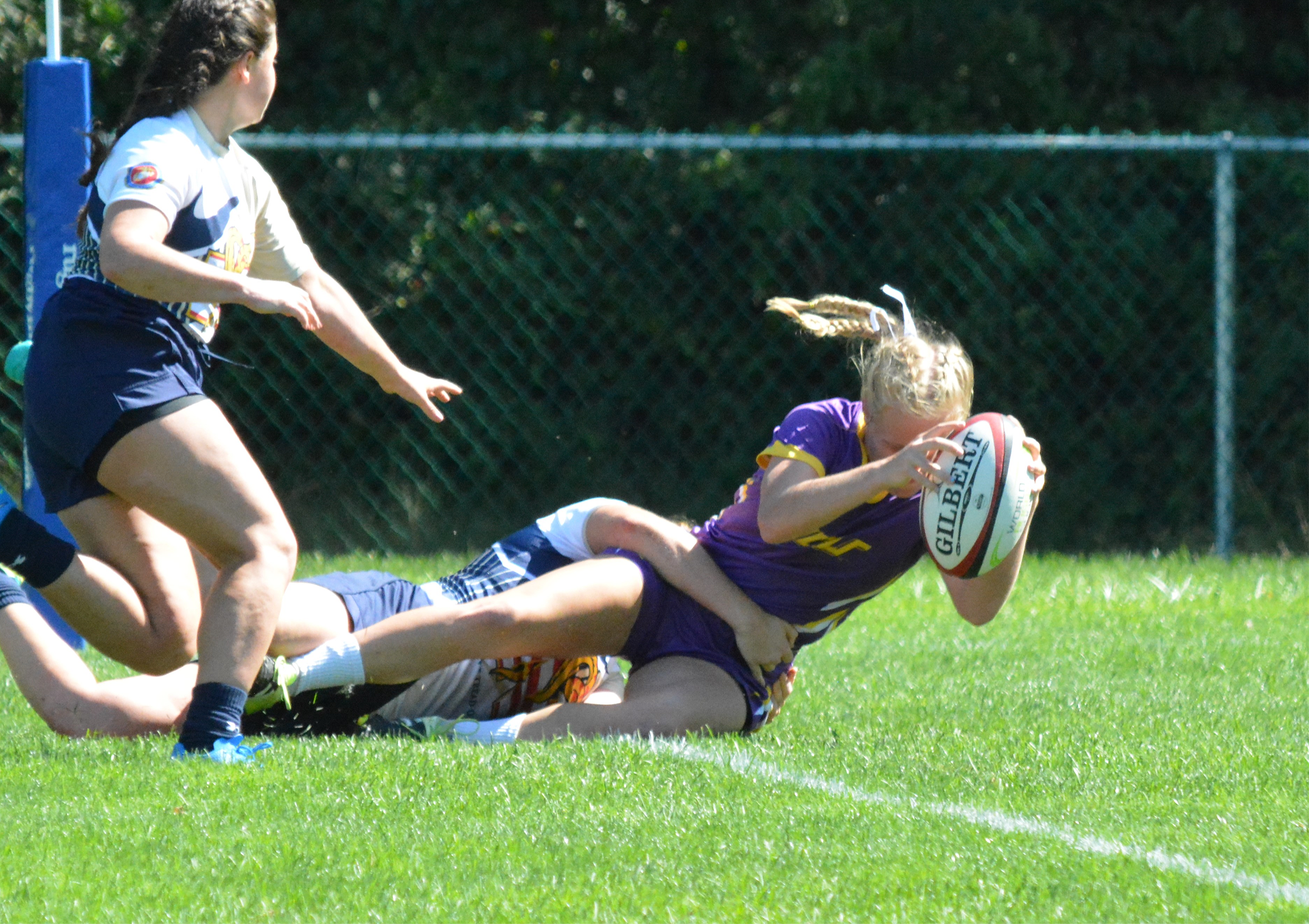 The team had seen Navy’s result against Queens – an 88-0 loss – the week prior and had some preconceived notions about what the Midshipmen might look like. But Navy coach Murph McCarthy later told Deremer that he had only taken his freshmen and sophomores to Queens, and had 60-plus players on the roster. West Chester has not been as fortunate numbers wise. Deremer is used to 30-35 players in the fall but is down to fewer than 20 at the moment. There’s still hope to add walk-ons but they of course will lack rugby experience.

West Chester took two injuries during the first 20 minutes against Navy and had to dip into a light bench. Taylor D’Orazio’s rugby experience amounted to two training sessions, and then it was into the front row.

“She performed tremendously,” Deremer lauded the debut. “It was a high-paced, physical and intense game, and I was so happy with how they played.” 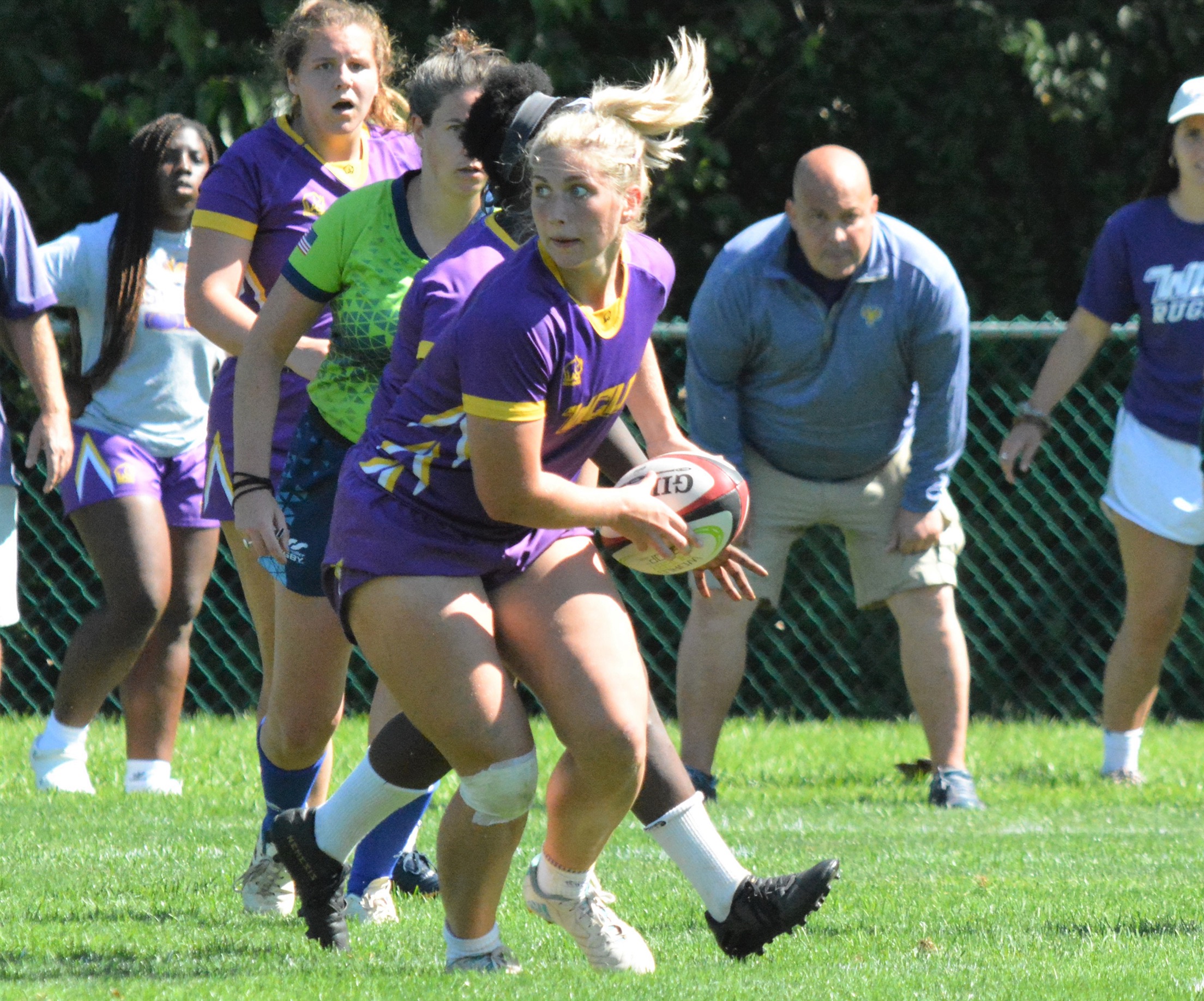 “She’s changed so much over the last four years,” Deremer praised Schindledecker, a versatile tight-five player. “She’s so dedicated to becoming the best rugby player she can be. She’s in the gym and lifting all the time, and it shows in her game. She’s all over the field, a great tackler, great on defense. Her game’s improved so much and she’s leading by example.”

Navy then answered with back-to-back tries, and then Christelle Alce closed the gap with her second try of the season. Aliprandi’s conversion gave West Chester the 12-10 lead until 35 seconds prior to the halftime whistle, when Navy scored its third try: 15-12 into the break. Meanwhile, Deremer noted two different game styles attempting to dominate the flow of play.

“We like to move the ball out through the hands and try to open up the game a bit, spread the defense,” the coach said. “Navy was pounding the ball, especially the last 10 minutes, just pick-and-go the whole way up the field.”

It was a good move by the Midshipmen, as West Chester was heavily penalized around the breakdown, effectively shutting down the Golden Rams’ poaching and counter-rucking game. 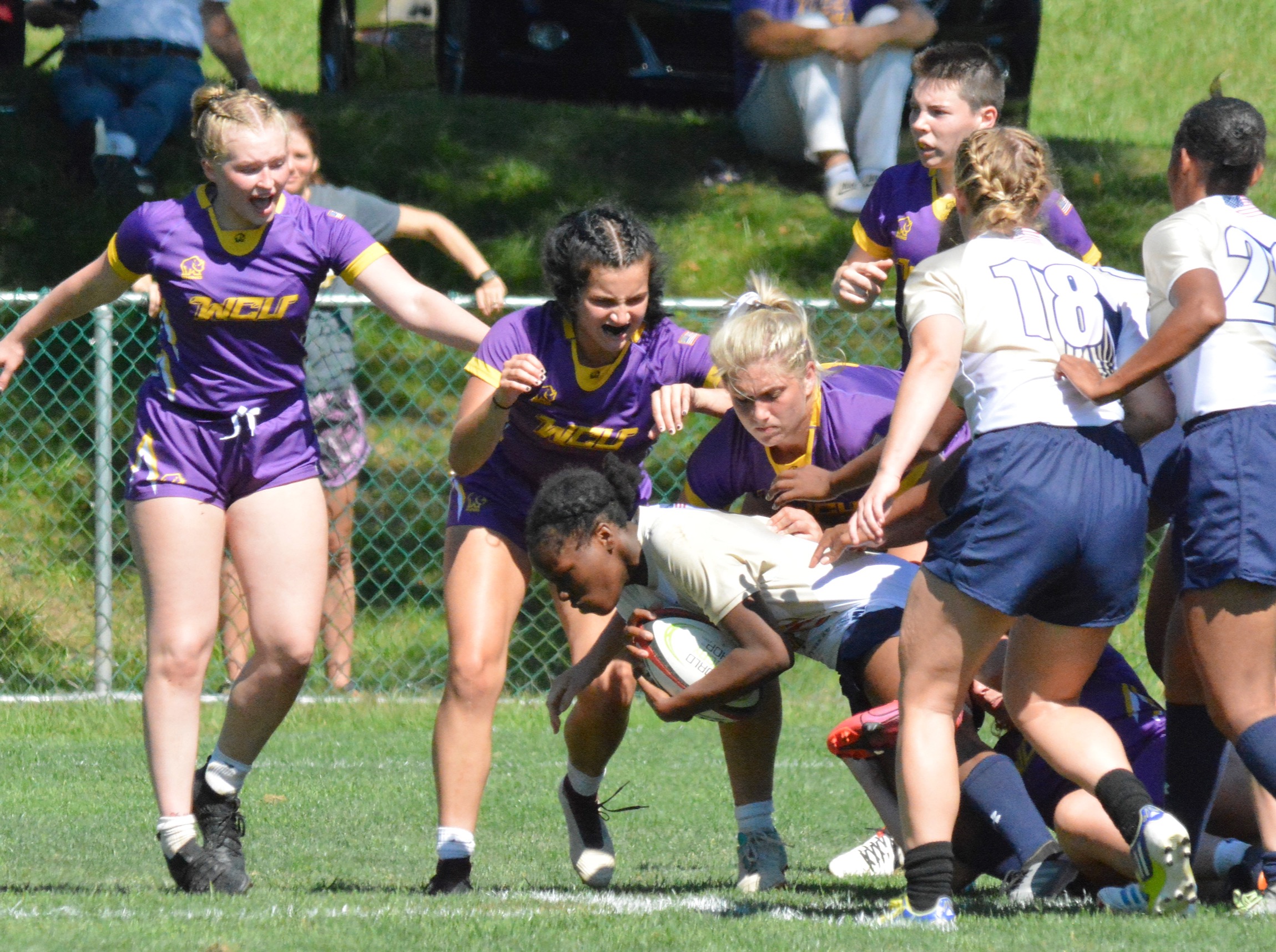 “All we could do was concede the ruck and take them on in the next tackle,” Deremer said. “It kind of affected how we performed at the tackle, and they took advantage of that and kept pounding off the edge of the rucks.”

The West Chester defense absorbed a determined Navy attack, and at one point, held the Midshipmen off its goal line for seven minutes straight, and prevented a score. Navy was able to pierce the line, however, and No. 8 Sarah Skinner was particularly tough to contain, scoring three of the academy team’s tries.

But West Chester was able to work its attack as well and center Autumn Czaplicki put the team ahead with her fifth try of the season. Elly Gorham’s conversion made it 19-15 to West Chester. 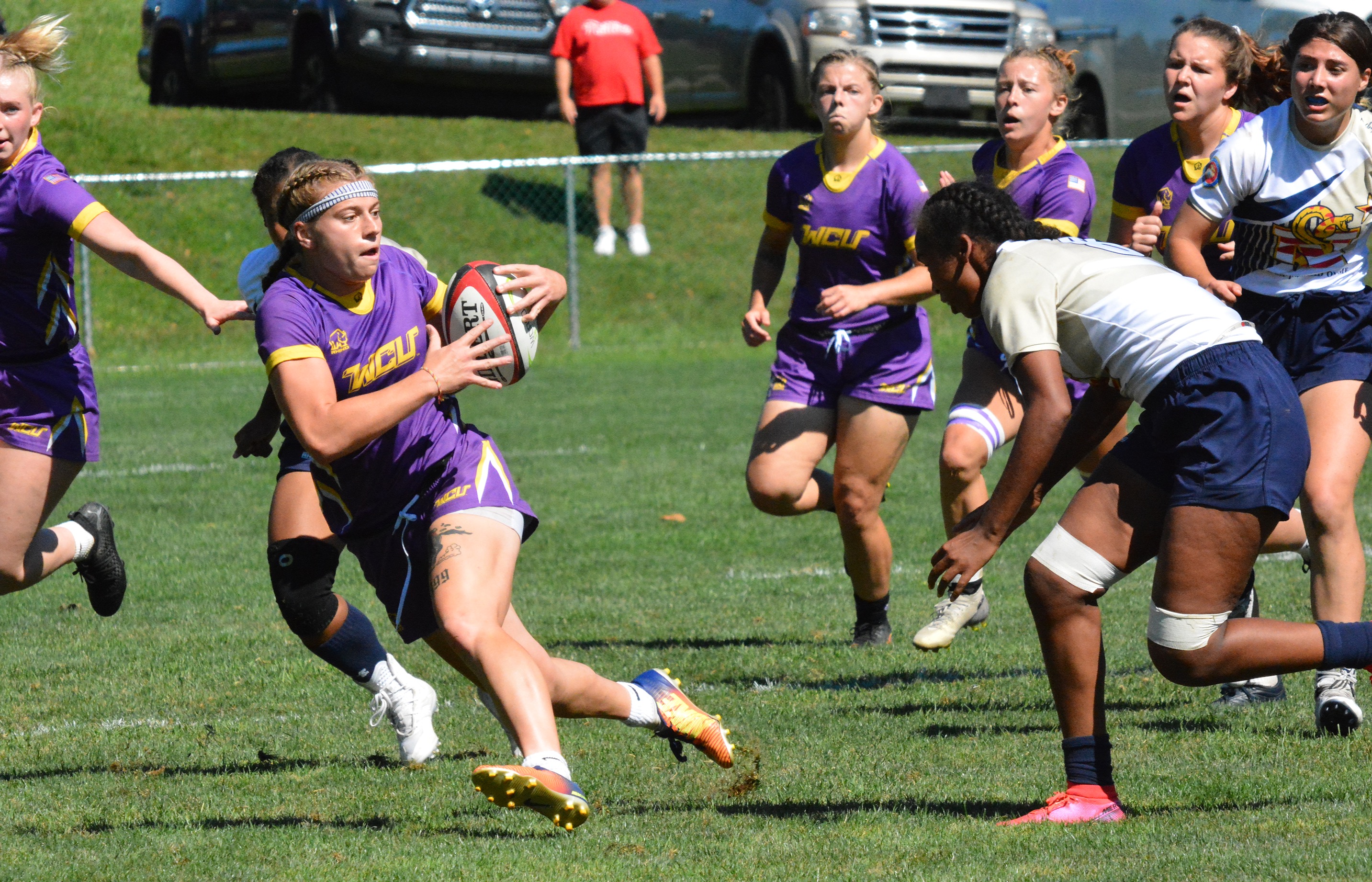 “Autumn is a senior this year, and she and Lauren Madalian are lighting up the scoreboard this year,” Deremer said. “Autumn is just an amazing athlete, and Lauren scored foru tries in one game this year.”

“Elly Gorham is one to watch,” the coach said of the West End (Va.) Ruckette product. “She stepped in at center and has done pretty well, but I intend for her to be our flyhalf in the future.”

Madison Rettenmaier is the current flyhalf and doing an excellent job in the decision-making position.

“Madison came to us from Colby-Sawyer,” Deremer said. “She transferred here a year ago and played for us last spring. She’s taken over the flyhalf duties and is doing a great job running the team and the offense.” 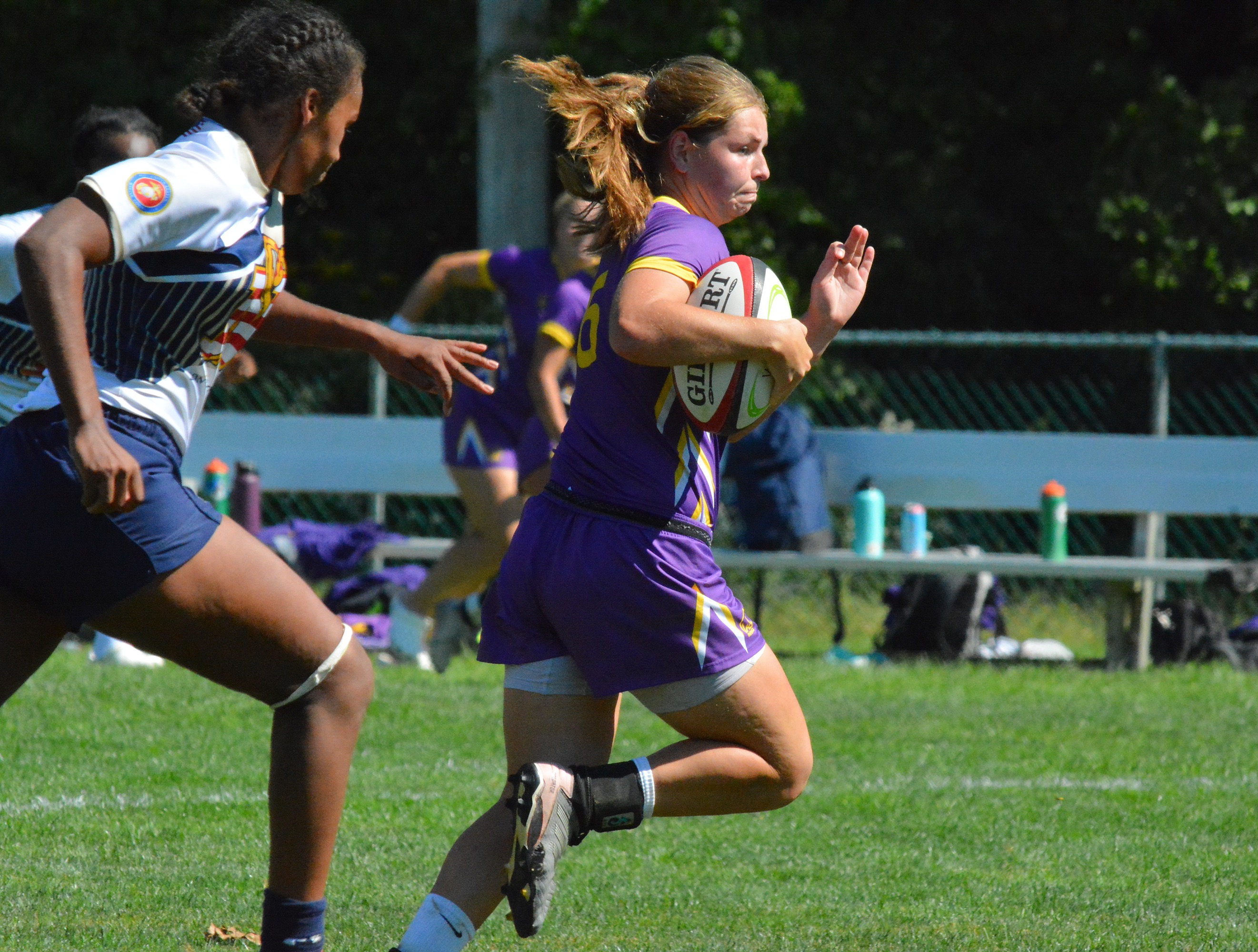 Erica Arnold scored for the Golden Rams and pushed the home side’s lead to 24-15, but the try-trading continued. Navy ended up scoring six tries but did not kick any conversions. West Chester was better off the tee, so when Tina Kimmich intercepted a pass for a 45-meter try, Aliprandi was able to add the extras for the 31-30 final.

“That game could have gone either way and it still would have been a great day,” Deremer said. “It was high level and fun to watch.

“They’re really excited and it prepares them for the division games coming up,” the coach said of the close-win’s effect. “When you win an intense game like that, where it comes down to the end, it’s a boost for you. If you lose that game, yeah, you want to come back from it, but maybe your heads are down a bit. They were all smiles.” 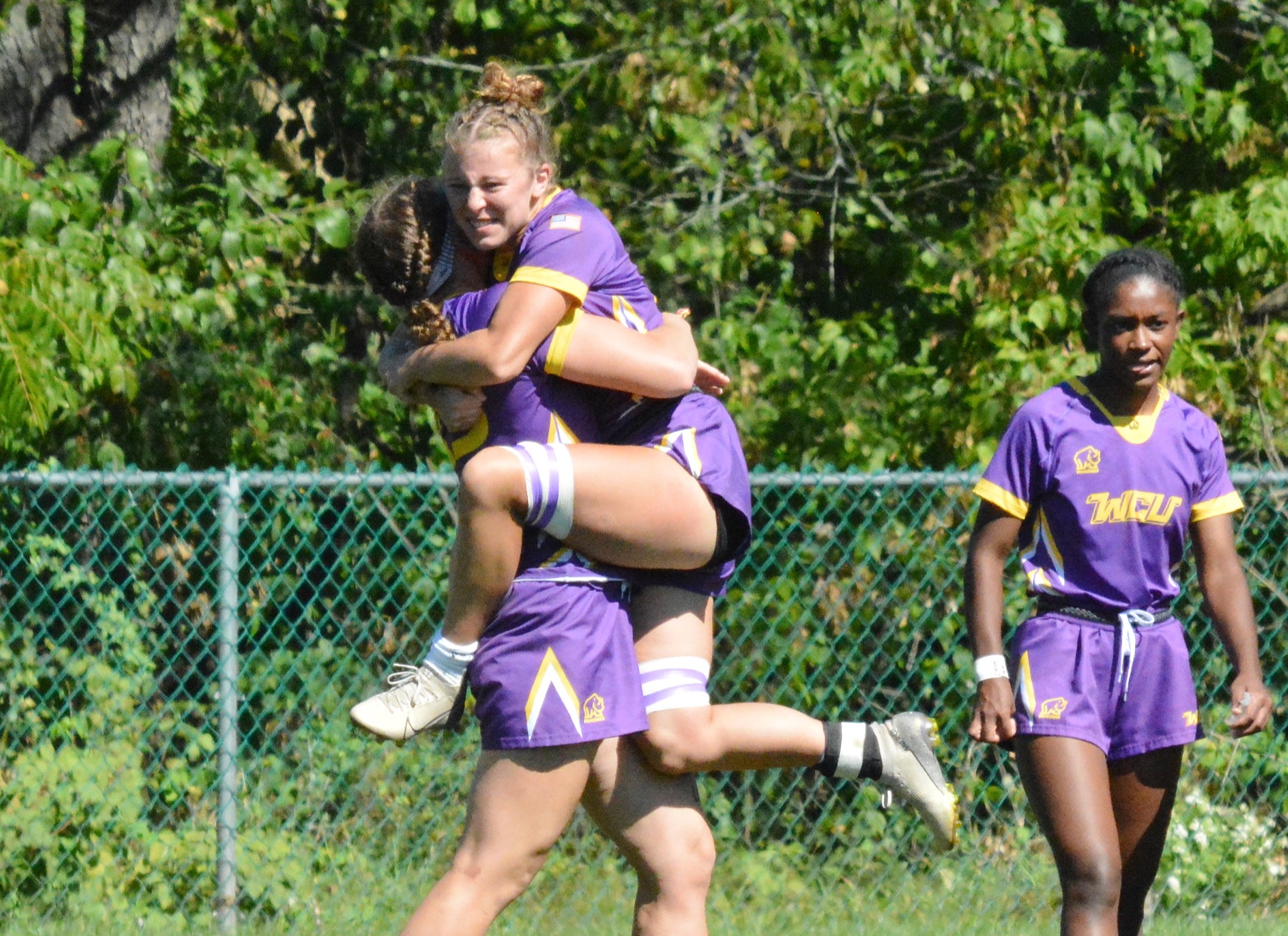 West Chester has four games in the coming month and has highlighted the Oct. 30 match against Queens as the one to build toward. That game will occur on neutral ground – Alderson Broaddus’ campus in Philippi, W.V.

“That’s their goal. It’s all they talk about,” Deremer said of the players’ desire to defend their DII title. “As a coach, you can’t let them look too far ahead. We’ll got step by step, game by game. But they are really focused on winning that championship again.”

West Chester will play Lander in Greenwood, S.C., on Sunday and then turn around to host AIC on Wednesday, Oct. 6.