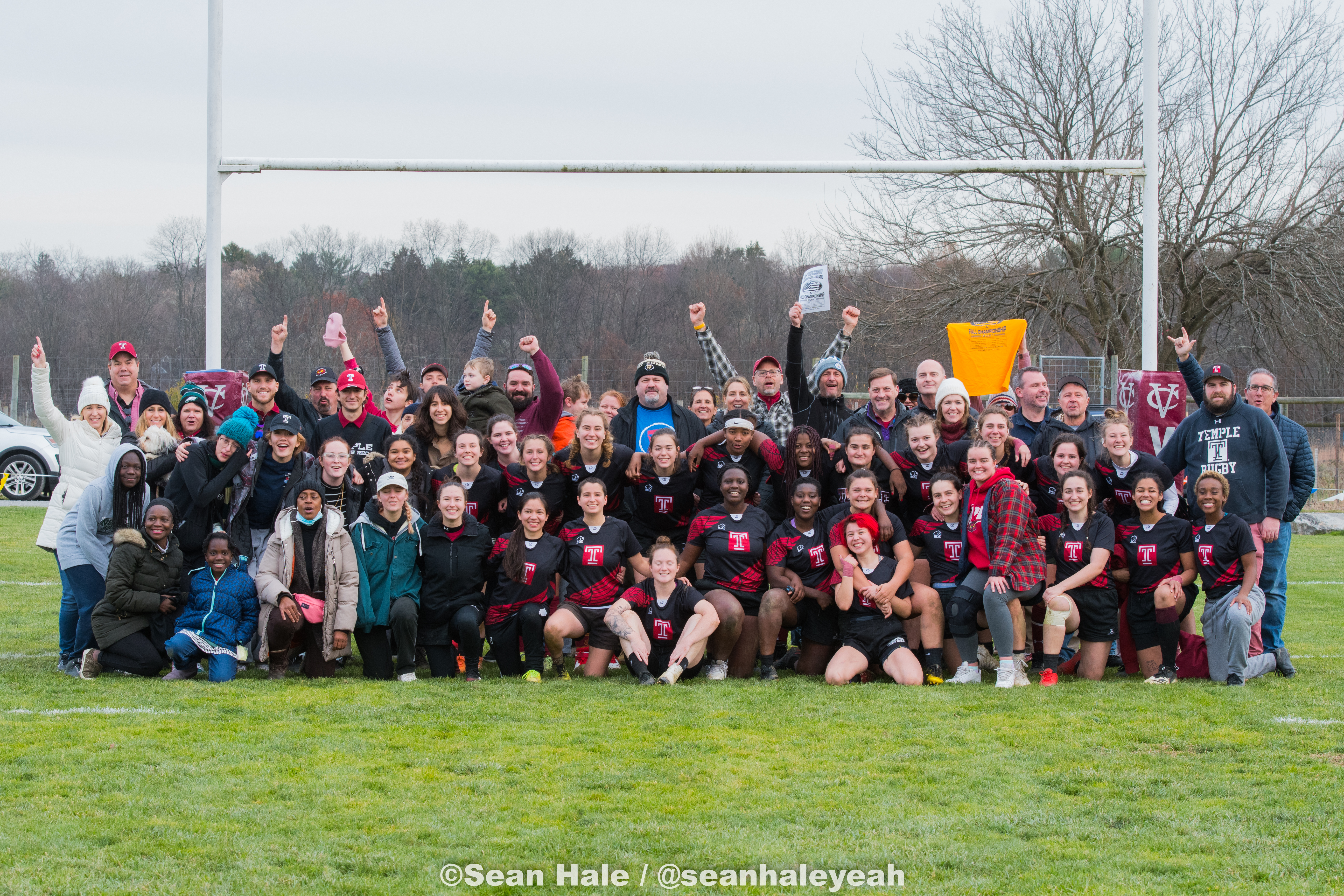 Temple University is heading to the American Collegiate Rugby Association (ACRA) Championship in Matthews, N.C. The Owls will face Vassar College on Saturday, Dec. 4, and look to add one more win to an undefeated season.

Temple head coach Josh Pedrow, president Emily Lesher and backs captain Pippa Barratt reviewed the team’s run-up to last weekend’s knockout rounds (read more). The leadership approached the fall with hopes of rebuilding. Lesher and Barratt, for example, are in the middle of their second 15s season. But then the newcomers digested the game with unexpected speed, and ambition followed. As the wins evolved and the post-season materialized, Mid-Atlantic champion Temple attacked the ACRA quarterfinals with the intent to win.

In Saturday’s quarterfinal, Temple lined up against Colorado Mesa University. The Mavericks finished runner-up in the Rocky Mountain conference, a league that is actually a member of the Collegiate Rugby Association of America (CRAA), not ACRA. The CRAA holds fall and spring 15s championships, but Rocky Mountain is the only CRAA league with fall-based DII teams. So CRAA and ACRA partnered this year, and the Rocky Mountain teams flew to New York for their playoffs. 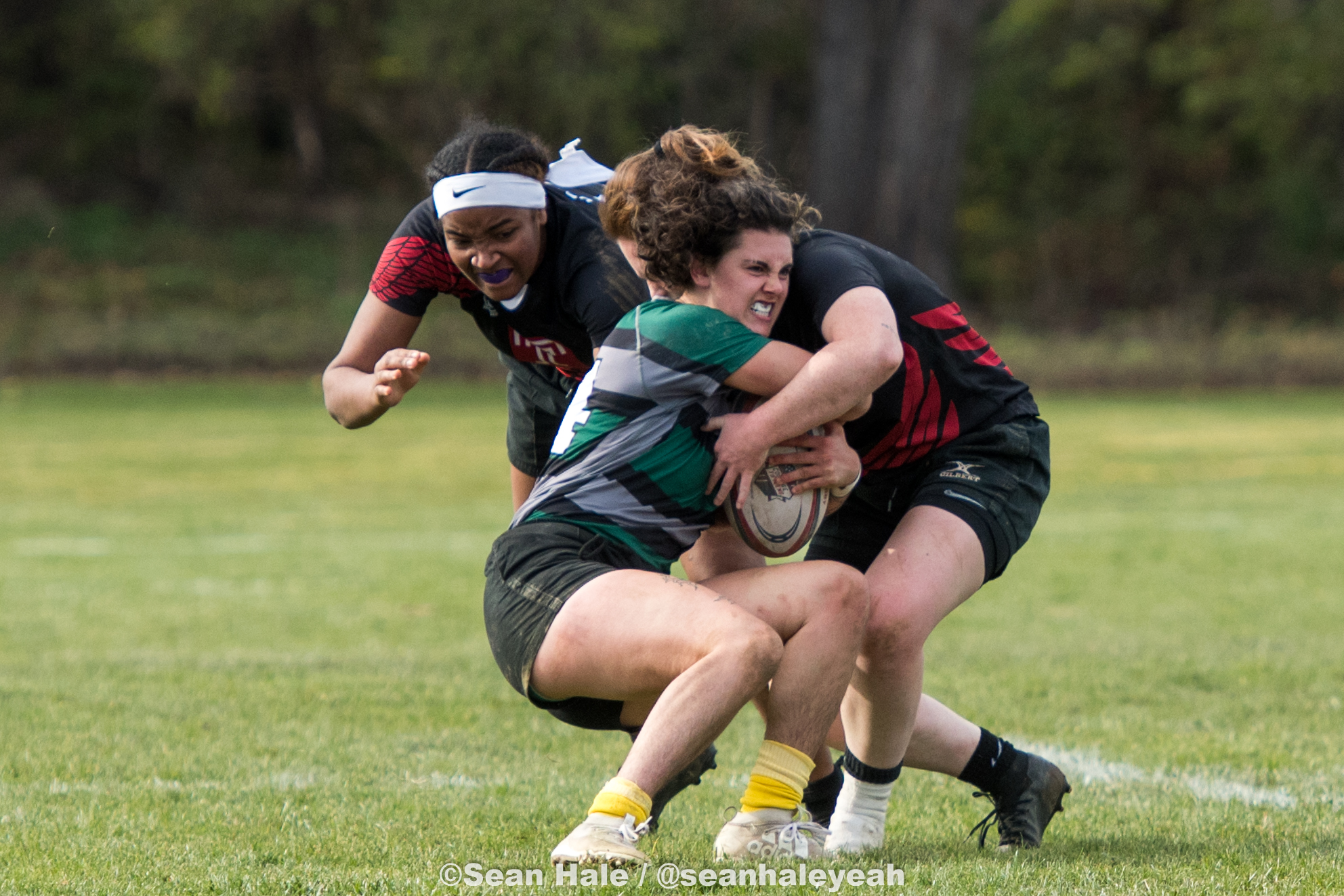 On the other side of the bracket, Tri-State champion Vassar beat Rugby Northeast’s Colby College 53-5, and the U.S. Coast Guard Academy held off Rocky Mountain champion Colorado School of Mines in a 20-19 quarterfinal win. On Sunday, the two victors met on one side the bracket, while Temple and Vermont met in the other semifinal. 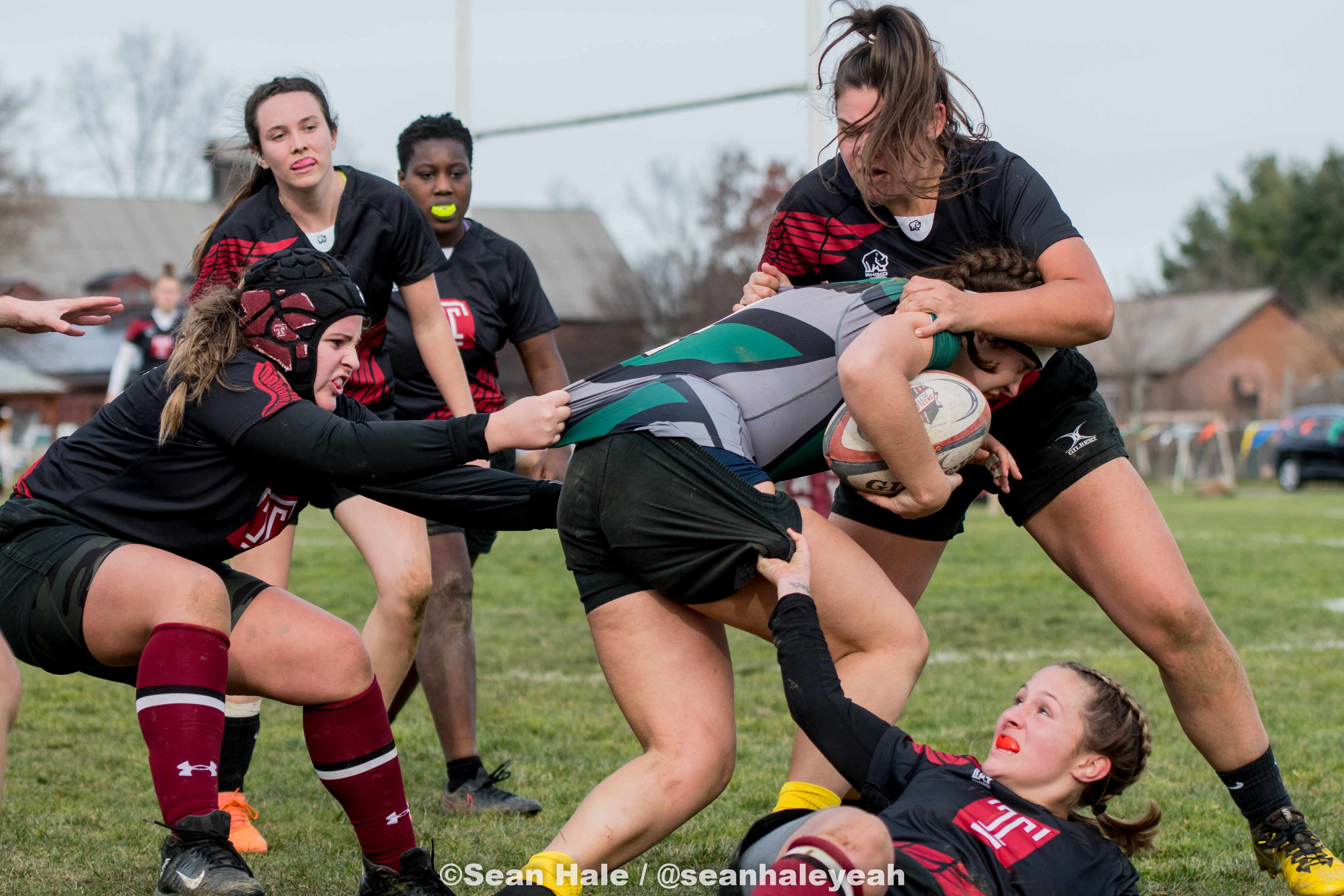 UVM had made big gains during the fall. When the team met the Coast Guard Academy in the regular season, Vermont lost 49-17. When they reunited for the New England Wide title and automatic berth to regionals, UVM won 34-31.

“UVM and us have similar styles but I think they relied on big plays a little more than us,” Pedrow reflected. “Both teams play a very physical and defense-oriented game, which the score showed, as well as how evenly matched we were.”

The teams traded scores and leads, and Temple adjusted to this new experience.

“There wasn’t a single moment when our team stopped fighting,” Barratt explained the team’s response to the deficit. “Collectively we knew this game wasn’t over and that we still had to fight. Our chemistry flowed fantastic together and when there were mistakes we reminded each other of where we were, what we had to do to get here, and why we were here.” 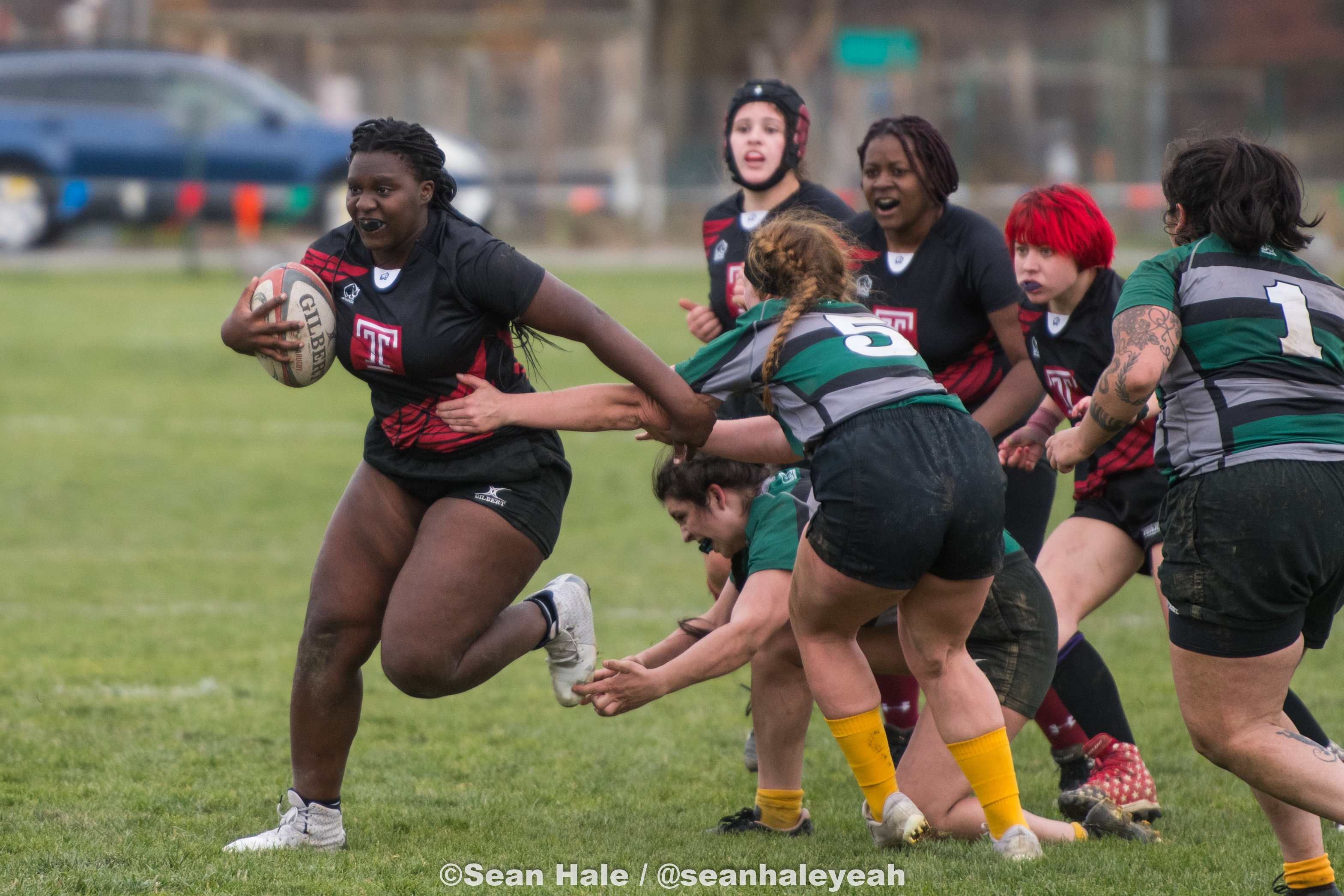 “The deciding factor in my eyes was fitness,” the coach continued. “Our big push at the end to overcome a 10-point deficit came with under 15 minutes left. The last try coming with two minutes left showed how our ladies never stopped pushing. It also has to be said that both our kickers, Pippa and Zay Baribaud, made conversions. Without those four points, UVM moves on.”

Those two conversion kicks afforded Temple the 19-17 win and berth to the final.

“We knew we have fought hard to arrive here and we deserve a place in this competition, and that’s exactly what we did,” Barratt added. “This season we were never really down a game, so seeing the team come together in a moment like this was a such a big deal. This win also inspired us as well: A team of majority new players can get just as far if not farther than veteran players.” 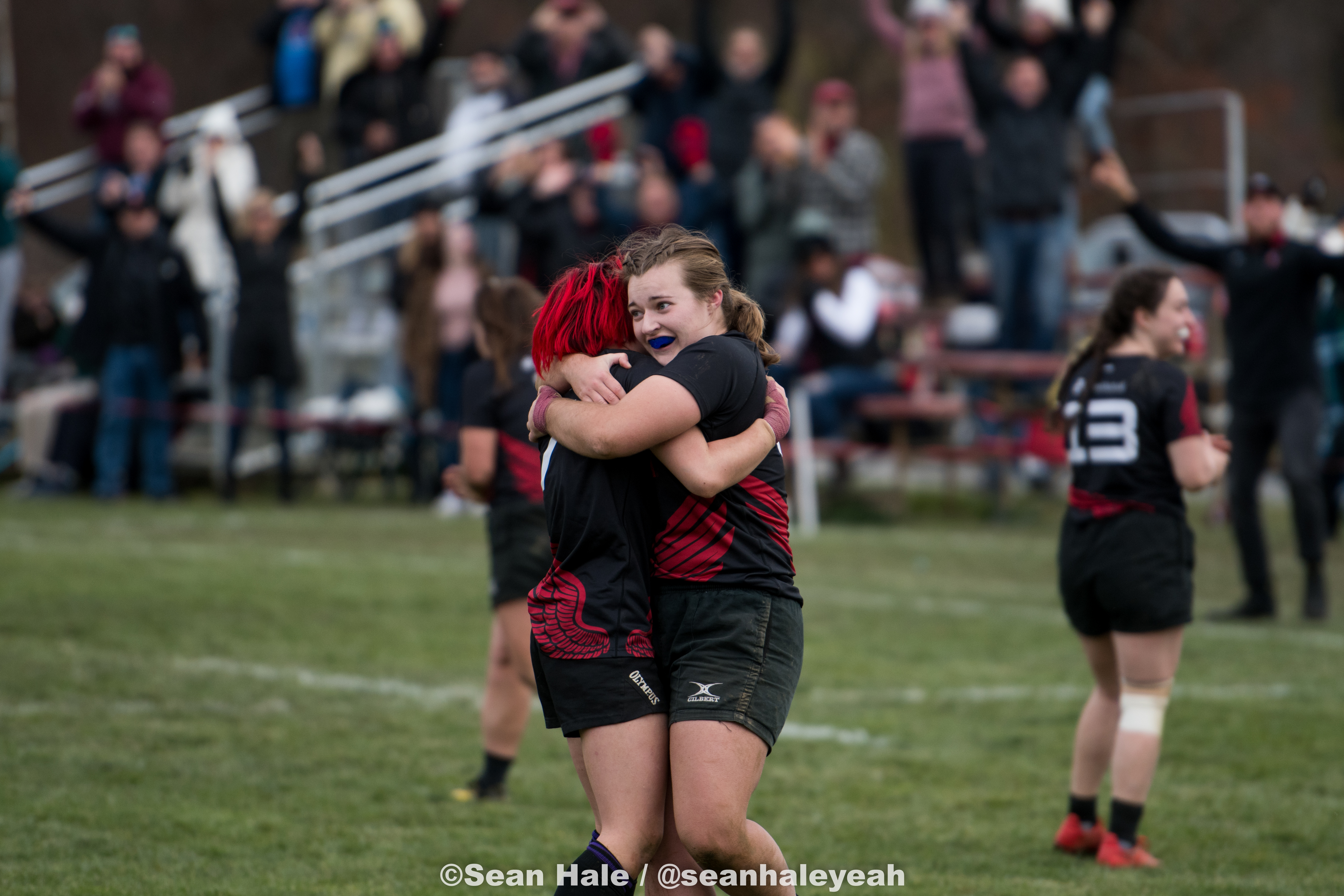 Vassar won its semifinal 36-20 against Coast Guard and books its travel to North Carolina as well. The Brewers won the DII fall championship in 2017 and featured in the 2018 title match. Temple has never competed in a seasonal championship but did win a national title, back when USA Rugby ran a unified competition. In 2004, Temple beat Providence College in the USA Rugby DII College National Championship with a team that featured head coach Lisa Rosen and future 7s and 15s Eagle Vanesha McGee. Temple advanced in 2005 and 2010 as well, but lost those national finals to Providence College and Washington State, respectively. For perspective on how the college game has

“We know Vassar is a formidable opponent, but we are coming prepared to play our game as hard as we can — just as we showed this weekend,” Temple president Emily Lesher enthused. “As a program we know we have a lot to prove, but like our hometown football team says, ‘Hungry dogs run faster.’”

The ACRA championship will kick off at 2 p.m. ET on Dec. 4 and is part of a full slate of college games across the weekend. As for the women’s college game, the CRAA will also host its DI fall championship match between Davenport University and the U.S. Naval Academy at 6 p.m. Saturday.