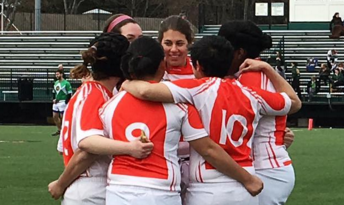 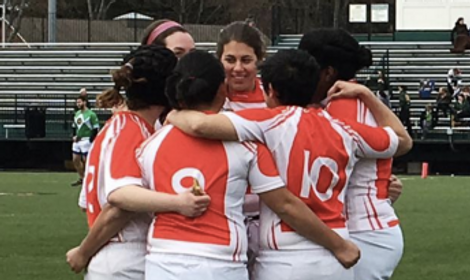 Some creative thinking out of Boston University is producing some pleasant surprises on the pitch, including this edition of Player of the Week.

“We’re trying something new this spring,” Boston University coach Nick Hildebidle explained. “For the past few years we’ve played almost exclusively 7s during the spring season, but we recruited well last fall and were worried that we wouldn’t be able to get enough game time for all of our players. So we have 7s A and B sides and then a 15s developmental side. Some players are doing both and some are playing just one or the other.”

On Saturday, Boston University played rival Boston College in 15s and won 26-0. It was nice recompense for the two losses suffered in the fall. Analisa Arguello, who was injured in her first game of rugby in the fall, returned to the pitch Saturday and started at flyhalf.

“It’s exciting to see someone with so little rugby experience step into the 10 jersey so naturally,” Hildebilde praised.

Victoria Frick showed some great leadership in the forwards, both offensively and defensively, and Arohi Behri lent consistency across both the 15s and 7s games. She started every match, playing outside center against Boston College and flyhalf at Siena 7s, and served as a good distributor and organizer.

On Sunday, the Terriers booted up for the Siena 7s in Loudonville, N.Y., and returned with a tournament title. The team went 5-0 and played a couple of close games, including a 22-10 win over Hofstra and 34-22 victory over Siena College. The tournament host’s 7s program is in its second year of existence and has realized some early successes – including a Cianci 7s title in the fall – under new coach Dmitri Zagorevski, formerly of Albany.

Hildebilde credited captain Paige Stathopolous for the expert leadership, and returning 7s players Abby Yotts and Alyssa Liem with strong performances. Reggie Jacques made a nice return as well. She started playing last spring and then studied abroad in the fall. Jacques doesn’t have a ton of experience, but she is really quick and an intimidating tackler.

“If I was going to pick a player of the weekend, it would have to be Tricia Post,” Hildebilde decided. “Tricia played some second-side prop for us last fall, but going into the spring we knew we would need to move some people around. We tried Tricia out at inside center against Boston College, and she was devastating. She scored twice, and her go-forward helped to set up a lot of our other offense. Based on her performance against Boston College, we decided to try her out on the 7s side, and again, she was a real threat with the ball in her hands.”

Next weekend is another 7s and 15s combination, as Boston University heads to the Rickerson Cup at Princeton on April 2, and plays Framingham State in 15s on April 3. More 15s at Beast of the East, more 7s at Polar Bear 7s, and then the team will return to the Penn Mutual CRC 7s in June.