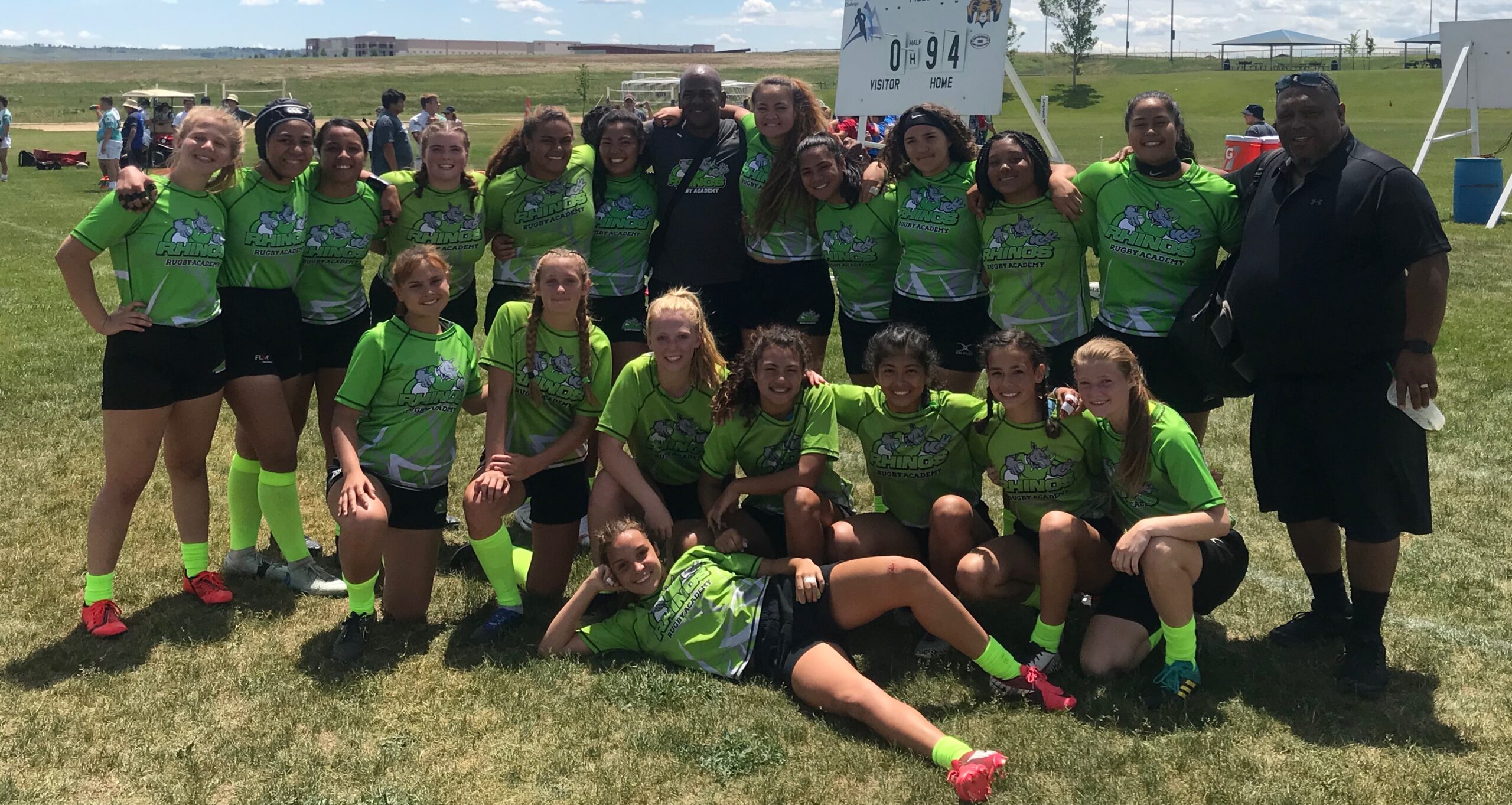 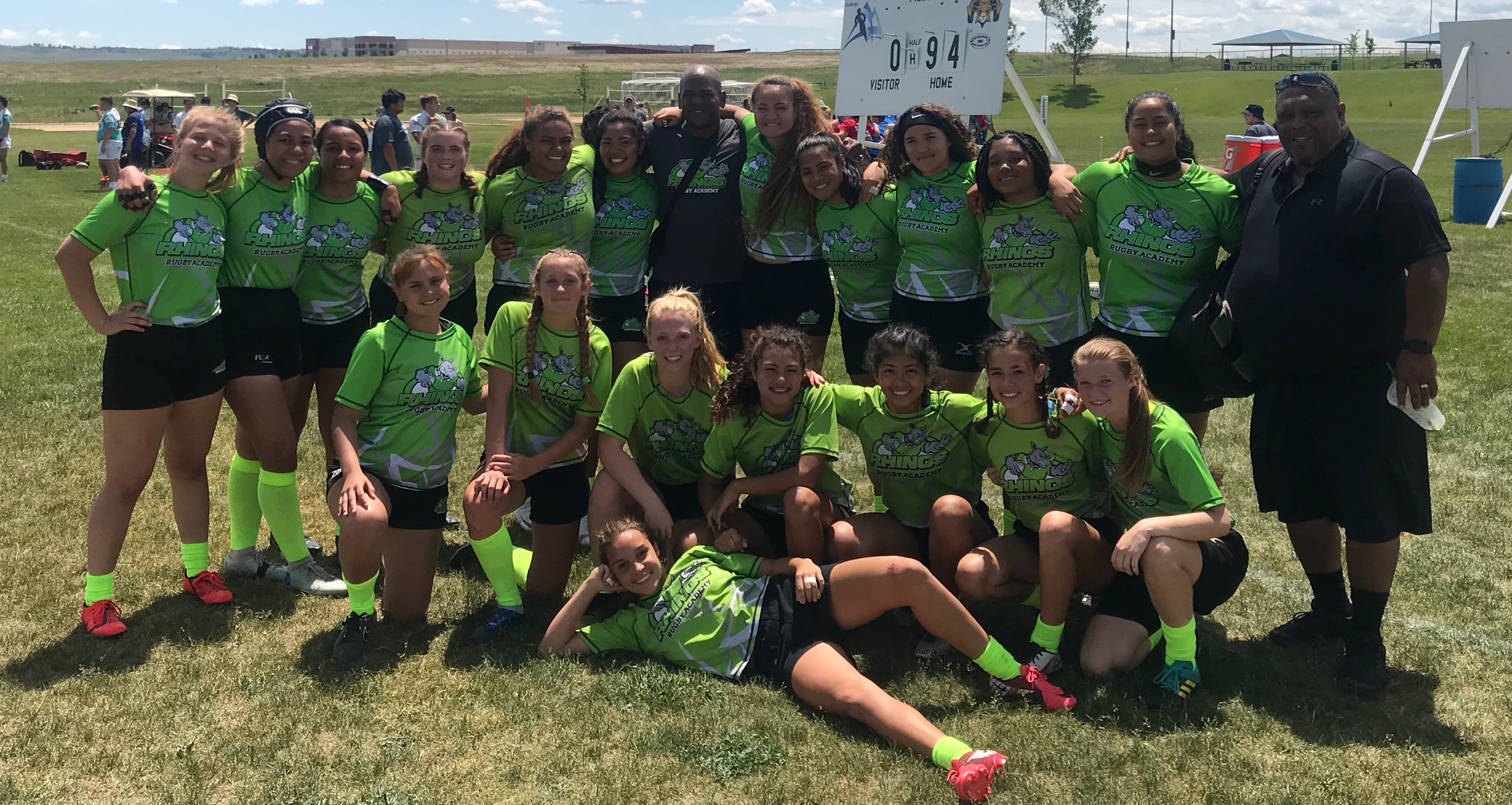 The Rhinos Rugby Academy is a known entity on the Pacific Coast, with major hubs in Phoenix, Sacramento and Irvine, Calif. The girls’ teams have primarily featured in high profile 7s tournaments – like the Las Vegas Invitational and North American Invitational in Salt Lake City – but sought 15s success a little farther from home this year. With a squad that drew from New Jersey to California, Rhinos travelled to Denver, Colo., to win the Rocky Mountain Challenge Regional Cup Tournament (RCT).

Mike Webber stepped in as a first-time coach of the girls’ team and he had three practices to familiarize himself with a team that included many newcomers. Based on player profiles it was clear that some backs would have to play in the pack, and so in the first team meeting in Denver, the coach emphasized the value of adaptability.

“Friday night we had an hour talk with the whole group, more about motivation and what it means to be a team, and how we’re only as good as our weakest link. I got a few head nods,” Webber recapped. “I told them that when you move to a higher level [of play], you’ll benefit from knowing multiple positions. College scouts, they might have a different idea of where you should play, so you have to be flexible.”

Webber knew he needed a hooker, lock and No. 8 at the very least and used the three practices to size up potential crossovers from the backs. He was of course grateful when players like Shy Tonumaipea of South Bay, the High School Club National Invitational Tournament champion, volunteered to move from center to front row.

“She said, ‘I’ll play hooker, although I’ve never done it before.’ She has the size and dimensions for being a prop, and balanced out our scrum,” Webber said. “She usually plays outside center and scores a lot of tries [for South Bay], but based on the 1331 configuration we run [on attack], she ended up being the perfect position for second-phase ball. She got the ball a lot and ran around and through people.”

Webber indicated that there were no complaints regarding positions and the team was united in taking on this challenge. That made the coaches’ job of identifying leaders, specifically a captain, easier.

“It was really based on how the group worked with each other,” Webber said of selecting on-field leaders. “I observed them at the hotel, talked with them, evaluated them during the three practices, and got a good feel for who was leading by example. ‘Don’t just do as I say – watch me to do it and then follow.’ Those were the characteristics I was looking for.”

Webber found his leader in flyhalf Alilia Lavemai, who is CIPPed with Rugby Oregon’s Lady Barbarians. The Red Hawks vet captained all four games at the RCT, and was able to clearly and concisely communicate to her teammates throughout the tournament. The opposition named her Player of the Match for two of the four games.

The Rocky Mountain RCT included three other Tier 1 teams in Rugby Colorado, 5785 and EIRA Midwest. Teams played a round robin and then a final placing match for four games total. Rhinos started the tournament with a 94-0 win over EIRA Midwest.

“Size wise we were probably a bigger club in the back field,” Webber said. “We have a lot of islanders and they usually come pretty stout in size and are very strong runners.”

Rhinos then faced 5785, which had started its day with a 27-15 win over Rugby Colorado.

“We probably got our biggest pushback in the second game,” Webber said of the 24-0 battle against 5785. “I attribute some of that to fitness; I could tell the girls were losing their legs and that was slowing them down.”

Rhinos beat Rugby Colorado 47-5 to secure its spot in the championship – a rematch against 5785, which had defeated EIRA Midwest 32-0 for the final’s berth.

“There was a huge difference in energy,” Webber contrasted the two games against the Colorado-based select side. “They knew where they were. The other team was knocking on the door but they wouldn’t give it to them.”

Rhinos won the championship 55-14 to end the weekend 4-0 and outscoring opponents 220-19. The scouts made their presence known, and Webber called out 15s newcomers like prop Jadyn Collins (Phoenix) and Skylar Jordan (Boston) for playing without intimidation.

Looking ahead, Rhinos will transition back to 7s for the rest of the summer and take center stage at its World Youth Rugby Festival in Irvine, Calif. The girls will also compete at the NAI 7s in Salt Lake City. That said, the academy is always looking for more players and is hoping the exposure in Denver will aid that recruitment.