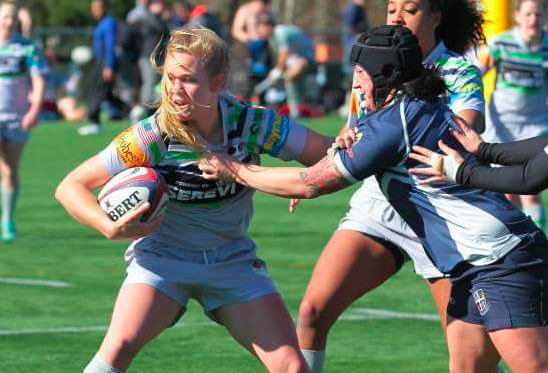 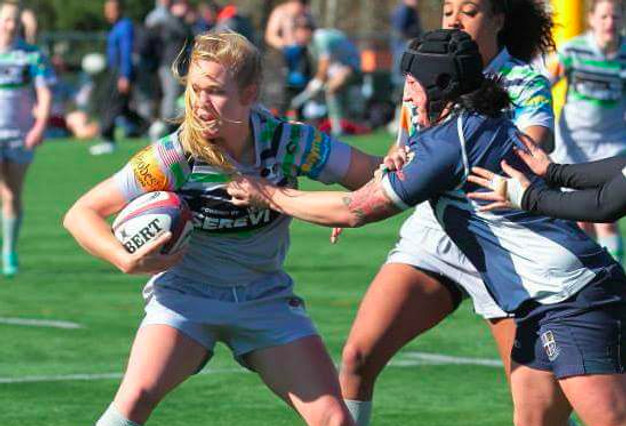 The Seattle Saracens improved to 7-1 in British Columbia’s Women’s Premier League. The Americans hosted Cowichan (Duncan, B.C.) in wet conditions that slowed the running style preferred by both teams, but Seattle prevailed in the 37-12 result.

Seattle kicked off to the visiting Cowichan side and consistently defended against the initial running patterns of the Canadians. Seattle kept their opponents pinned inside their own 22 meters during the first quarter of the match. The visitors were unwilling to relieve territorial pressure with the boot, instead running out of their end throughout. This strategic decision would prove fatal for the young Vancouver Island squad.

Seattle’s first try came from a handling error by a Cowichan player. Playing with the advantage, Seattle Captain and #8 Kristine Sommer (pictured; Judy Teasdale photo) pounced on the errant ball at the 10-minute mark for the 5-0 lead. The wet and windy conditions created difficult kicking attempts throughout the contest and the initial conversion was off the left post by Seattle winger Carly MacKinnon.

Cowichan dominated the set piece, both in the scrums and lineouts. Luckily, Seattle was able to retain the ball sometimes, based on good hands and quick reactions. An overthrown lineout ball was collected by Seattle lock Kala Clanton who ran sideways across the pitch, tacklers in pursuit. She was tackled about 10 meters from the try line, and flanker Rose Baker scooped up the quick ball and raced ahead to score near the uprights. The quick transfer beat the defense and made the MacKinnon conversion much easier. She was good on the kick and after 18 minutes, Seattle was ahead 12-0.

The third and fourth try for Seattle featured the pace and finishing ability of Clanton. On both five-pointers, she received the ball in space and burst to top-end speed. The final 30 meters went quickly because of her long running stride. Clanton’s last scoring effort was the most dynamic try of the day.

At the 36th minute, Cowichan lost possession inside Seattle’s half. After a few quick and accurate short passes from the hosts, hooker Uche Esonu found open space and raced ahead for 30 meters. Esonu offloaded to the supporting Clanton in a clinical display of timing and speed. The attacking continuity met no defensive resistance until the final five meters, where Clanton wisely dove early to prevent being tackled into touch. The sideline conversion fell short, Seattle 24-0. MacKinnon added a penalty kick at the final whistle to end the first half with the Americans up 27-0.

Cowichan responded to the stern critique of their first-half performance with a new attacking attitude after the restart. The visitors were awarded a 10-minute player advantage as Seattle winger Ashley Kmiecik was given a yellow card for a high tackle. Cowichan responded with two tries in the span of eight minutes.  The second try began with a set piece center crash to their fullback. She raced through the defense untouched and was able to outpace the cover defense for an impressive individual effort. It was later learned the speedy Cowichan fullback is a 42-year-old mother of two. And with one conversion, the visitors were back in the game 27-12 at 60 minutes.

Seattle responded on the ensuing kickoff with a solid defensive effort that limited the attacking ability of the Canadians. Again they decided to run out of their 22-meter line and lost possession in contact, and an attacking scrum was given to Seattle. Cowichan was whistled for an early push on the ensuing set piece and after a quick tap, Sommer was over the line for her second try of the day. Seattle scrumhalf Carrie White missed the conversion. And after 64 minutes, Seattle was up 32-12.

The last scoring effort started with an attacking error by the visitors in which Seattle was able to quickly reverse the point of attack. Recent Penn State graduate and center Lauren Barber made an accurate and timely pass to supporting fullback Kati Lee. She was able to outpace the defense and score Seattle’s sixth try of the contest. The conversion failed and the final score was Seattle 37-12.

The halfback combo of White and flyhalf Elena Cantorna moved the ball effectively and organized the Seattle attack under less than ideal handling conditions. Sommer and openside flanker Emily Alonzo led from the front on defense. Both were tackling machines, each registering double digits in tackles.

A big test awaits this Saturday, as the Castaway Wanderers travel from Vancouver Island to take on Seattle at Magnuson Park (11:30 a.m. kickoff). The game marks the first meeting between the two sides and will go long way in gauging the teams’ relative strength.