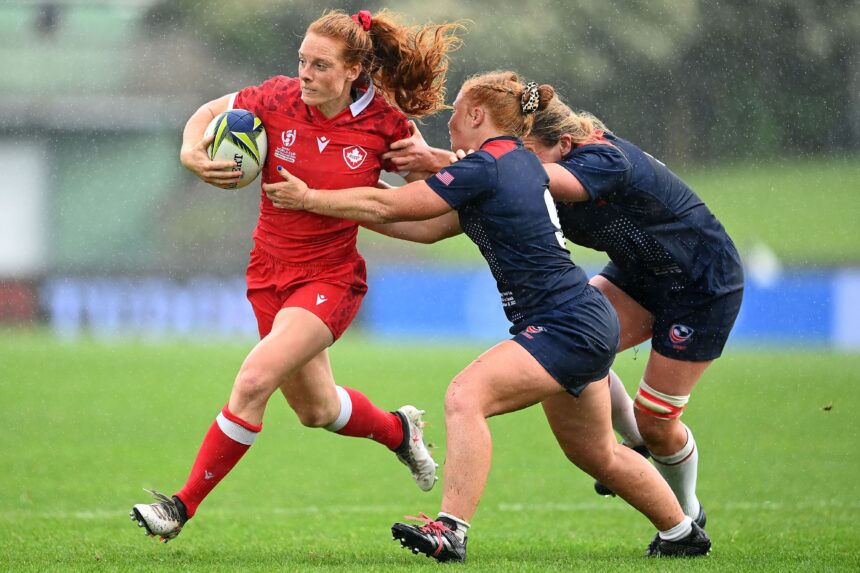 The USA Women’s National Team (WNT) has ended its Rugby World Cup 2021 campaign with a 32-11 quarterfinal loss to Canada, finishing 1-3 in New Zealand. The Eagles only trailed 12-8 at halftime, but a disallowed try and yellow card saw momentum shift to Canada in the pull-away win.

Kicking exchanges marked the first half and Alev Kelter was solid for distance. On the run, Gabby Cantorna mixed in grubbers and chip kicks, the former being more successful and better chased.

“[D]iscipline was one,” USA WNT head coach Rob Cain said of foci. “We were a lot better; we didn’t give away so many penalties. Making sure that we’re having combat on our terms and moving the ball to areas we wanted, because they’re a big physical team, you know, turning them, ensuring that we could win those kick-chase battles and trying to put them under pressure. They have got a lot of kickers.”

The Eagles also wanted to bank points early on and built that momentum. 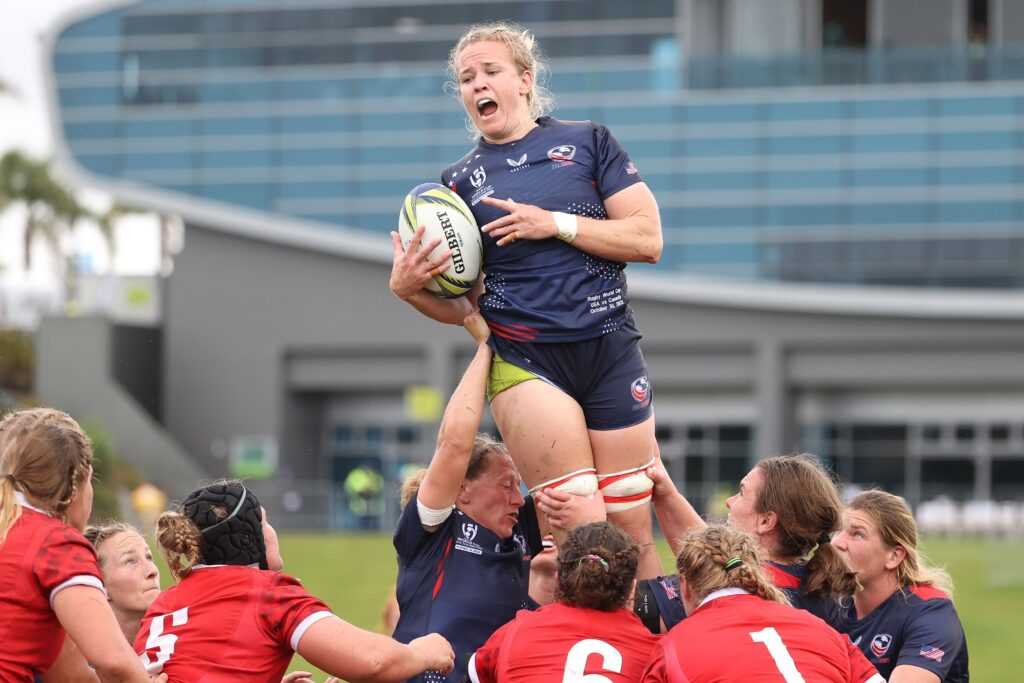 Fullback Tess Feury kicked ahead and Canadian flanker Fabiola Forteza erred on the receipt for a USA scrum. A skip pass from Eti Haungatau to Lotte Clapp saw the wing gain ground out wide. From the ruck, scrumhalf Carly Waters broke down the short side to Canada’s 10 meter before being high-tackled into touch. The penalty set up a five-meter lineout, and a nice set piece move between Kathryn Johnson and Joanna Kitlinski to the weak side got the Eagles to within a meter of the try line. Hope Rogers picked at the line and then Kitlinski pierced the defense for the hooker’s second Rugby World Cup try, 5-0, after eight minutes.

Canada got in good attacking territory when an Elissa Alarie kick was misplayed into touch. The teams traded penalties and possession, but Canada eventually made good use of the field position. From a five-meter lineout, Canada drove its maul to the line and lock McKinley Hunt found a seam for the try. Captain Sophie De Goede converted for the 7-5 lead.

Canada had the momentum and ballcarriers harnessed it into contact. De Goede set the tone with a massive collision and the forwards continued through the middle of the pitch. When the ball zipped wide, Alarie got off the grubber just before the Haungatau hit, and it threaded past Feury into the try zone. Player of the Match Karen Paquin was on the chase and beat Jennine Detiveaux covering to the ball for the dot-down. The series was arguably the highlight of the match, 12-5 after 20 minutes. 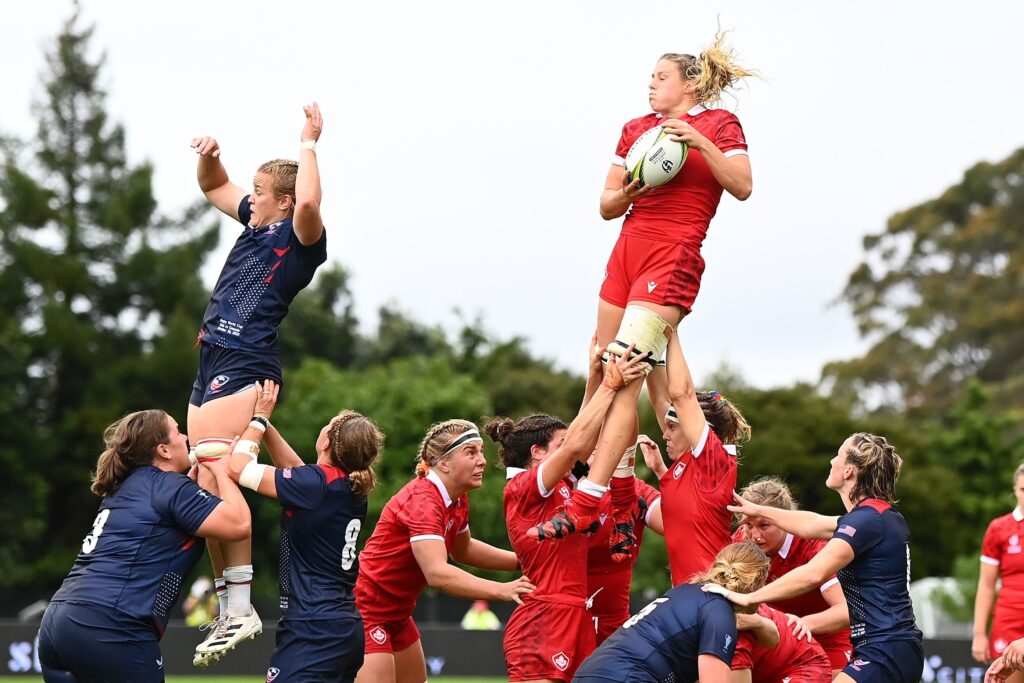 It felt like the game was slipping away a bit for the Americans – miscommunication after a kick receipt, front row penalty in the scrum – but then the Eagles immediately pounced on an unforced error. Following a knock-on and penalty for holding on, the USA launched fast, wide phases and the pressure snapped Canada’s composure. The USA was driving a lineout maul to the try line when two penalties forced referee Joy Neville to warn Canada. At minute 29, Hope Rogers scored from the subsequent driving maul, and Neville awarded the try with no request for review. The TMO then interjected and after Neville twice asserted that the try should stand, but the TMO continued to dispute the on-field ruling until the it was overturned. Neville eventually conceded.

Canada immediately returned to the USA’s end in what looked like a terrible reverse of fortune. But a fortuitous knock-on allowed for relief. Haungatau carried well to get the game out of the 22, and Tessier later kick the ball out on the full to put the game on the Canada 40. Another solid lineout and pressure-building phases saw Paquin cough up a not-rolling penalty. Kelter lined up the kick and was good for three: 12-8 into the break.

“I thought for the first 40 minutes it worked really well,” Cain said of the game plan. “We obviously had a try that was disallowed for the second week, which is always difficult in terms of momentum. But we took the penalty instead. So yeah, first half, very pleased with, exactly what we wanted and then of course disappointment in that 20 minutes and it was hard to recover.”

Canada kicked off the second half and Paquin won the aerial battle for the steal. The forwards punished in tight, and then the ball moved wide, where wing Paige Farries inserted into the line and between defenders for the try. De Goede converted for the 19-8 lead in the opening minute.

The USA answered right away, as Kelter nailed an off-center penalty from approximately 38 meters out: 19-11 after 44 minutes. Shortly afterward, the inside center attempted to clear the USA’s 22 but Forteza was on the hunt and blocked the kick. Canada got into goal-line phases, and then head-to-head contact between Kelter and Forteza saw the latter draw a yellow card. De Goede made good on the three points, while the Eagles regrouped with 14 players for the next 10 minutes, 22-11.

“We lost the first restart,” Cain talked about the turning point. “We gave up, you know, a try that we shouldn’t have given up. And then of course [Canada] get a bit of momentum, a penalty, we get a yellow card and you’re behind the game, and then players are trying to do things that we haven’t done all week and chase a game, which you know is a big lesson for them.”

After 52 minutes, Canada had made seven visits to the USA’s 22, while the Americans had made two. It looked like another score was in the works, but then Cantorna did well to recover a Canada handling error after a lineout. But then an intended clearance kick went out on the full, and Canada went to back to work. Alarie carved through the defense out wide, and then the pack attacked the goal line. After several attempts to dive over, one pass out to Tessier was enough space for the try, which De Goede converted, 29-11 after 58 minutes.

Canada added another penalty at 65 minutes. A nice back line move off the scrum put wing Maddy Grant into space for a big break. An offsides penalty at the USA 22 allowed De Goede to slot the penalty, 32-11.

With the outcome essentially decided and the emotion that comes with such high stakes, the game got looser and chippier. With the 32-11 win, Canada moves onto the Nov. 5 semifinals and will face England. New Zealand and France contest the other semifinal next weekend. There are no consolation matches (except 3rd place) at the Rugby World Cup, and thus the Eagles have concluded their run in New Zealand.

“And that’s why I’m so incredibly proud of all the players,” the coach closed. “You know, we do things tough sometimes. They’ve had some really harsh lessons but when you look at things that we don’t have and what we do achieve, then it’s really quite special.”