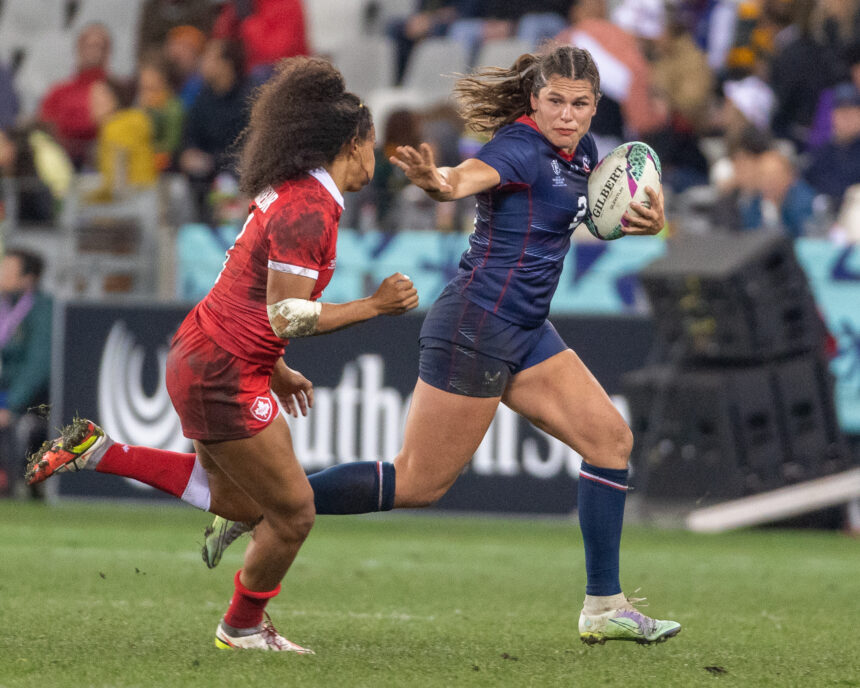 The USA Women finished 2-1 after day one of the Dubai 7s, the first leg of the HSBC World Rugby Sevens Series for the women. The Eagles will play Ireland in the Cup Quarterfinals on Saturday, Dec. 3 at 12:22 a.m. EDT. Tournament streams live on Peacock TV. [Lead image: Ilona Maher at RWC 7s / Alex Ho]

After opening with a 12-7 win against Canada, the USA lined up against China and built a 17-0 halftime lead. Captain Naya Tapper and Ilona scored in the opening two minutes, and then Kristi Kirshe scored right before the break. Kayla Canett added the final conversion for the solid lead.

Steph Rovetti came off the bench in the second half, returning to the pitch after a long injury hiatus, and Nana Fa’avesi also got good minutes as a reserve. Ma Xiao Dan scored at the 12-minute mark and Gu Yaoyao added the conversion for the 17-7 scoreline. Sammy Sullivan and Alex Sedrick bolstered the defense with fresh legs and the USA sealed its second win in the desert.

The day ended against Australia, which had defeated China 36-7 and Canada 33-0 earlier in the day. The Americans went up first, as Alena Olsen scored two minutes in and Canett converted for the 7-0 lead. But then Australia opened up, finishing three first-half tries through Maddison Levi. Sharon Williams added a conversion for the 17-7 halftime lead.

Jaz Gray scored in the second half, but that try was sandwiched by another Levi score and Madison Ashby five-pointer. With Tia Hinds’ conversion, Australia banked a 29-12 win.

The USA finished second in Pool A and will face Ireland – which went 3-0 against Spain, Japan and Fiji in Pool C – in the Cup Quarterfinals. Kickoff is 12:22 a.m. EDT on Saturday, Dec. 3. Depending on the outcome, the Eagles will play either New Zealand or Great Britain in the subsequent round.